10 Things New Orleans is Known For and Famous For 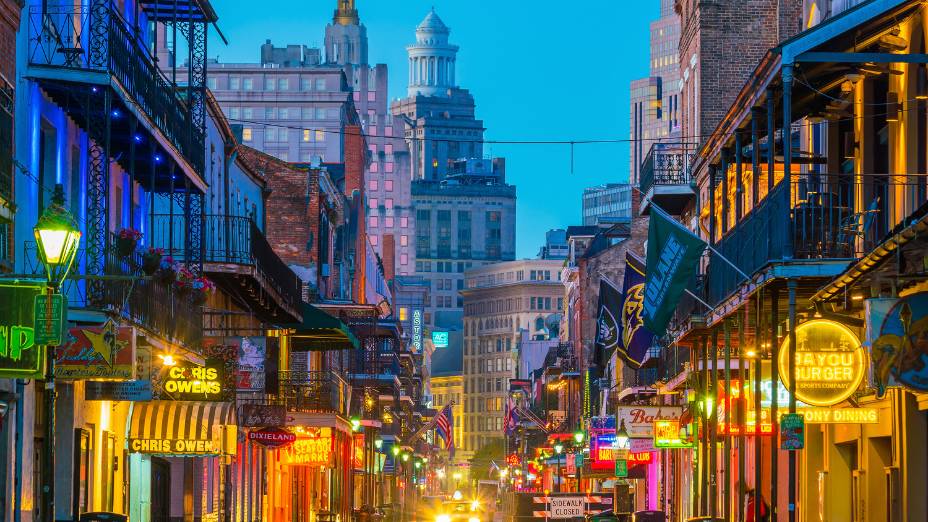 What Is New Orleans Known For?

New Orleans, Louisiana has one of the strongest city identities in all of the United States. It developed this identity throughout its colonial history and solidified it well into the 21st century via its robust tourism industry. But what is New Orleans known for?

New Orleans is known for its creole culture, jazz music, Mardi Gras celebrations, and Louisiana voodoo. It also played an important role in the Civil Rights movement in the 1960s. The city made the news for Hurricane Katrina’s devastation but has since re-established itself as a tourist destination.

Much of New Orleans’ identity is rooted in its creole heritage and the impact of French and Spanish colonial control. Since Louisiana joined the United States, New Orleans has become an important part of American history and culture as well. Read on to learn about how this city on the coast of Louisiana became the colorful city it’s known as today. 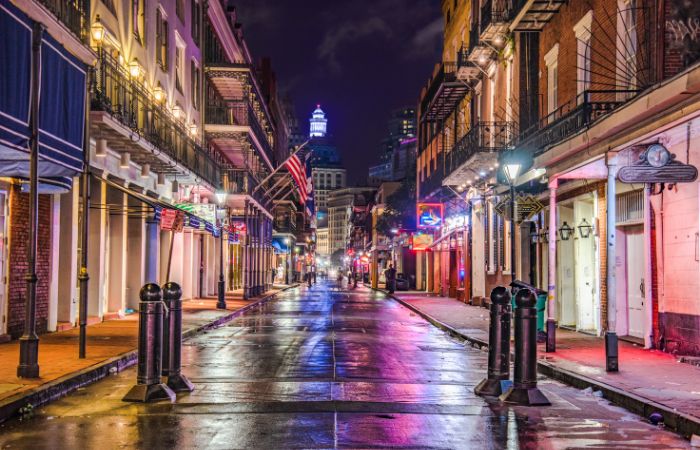 New Orleans: An Overview on the City’s History

New Orleans was originally settled by French colonialists in the 1700s, then sold to Spain and ceded back to France, all before it became an American colony in 1803 as part of the Louisiana Purchase. In New Orleans, people began using the term “Louisiana creole” to describe French and Spanish settlers and their descendants, including people of mixed racial backgrounds.

In Louisiana, creole didn’t originally indicate a specific racial background but rather differentiated Louisiana-born people from newer immigrants in the wake of the Louisiana Purchase. However, as the slave trade and racism continued to flourish in the United States in the years leading up to the Civil War, the term shifted to indicate people of mixed race primarily.

Eventually, creole re-broadened in modern usage to include anyone with family history in colonial Louisiana, whether French, Spanish, or American.

Separate from creole culture, Louisiana has long been an important player in the Civil Rights movement and other social, cultural, and civic advances for Black people in America. Because New Orleans was a major port city during the antebellum years, the city was an important hub in the transatlantic slave trade. The city’s enormous sugarcane plantations also required an enormous enslaved workforce.

At the same time, New Orleans had a large free Black population during that era due to Spanish colonial rules that relaxed many of the colony’s slavery laws. However, the enslaved population of Black people outnumbered the free.

In the post-Civil War era in the United States, Jim Crow laws functioned not only to keep formerly enslaved people economically and socially oppressed but also negatively impacted many of the people of color who had always lived free in New Orleans. This newly disenfranchised group of people began the fight in New Orleans for equal rights.

Throughout the end of the 19th century and into the Civil Rights movement, New Orleans groups organized against unjust laws and inequality. Homer Plessy — of the famous 1896 Plessy vs. Ferguson Supreme Court case that determined segregation was legal — was from New Orleans, where the case originated.

More than 60 years later, Ruby Bridges was one of the first children to desegregate New Orleans schools in the wake of the Brown vs. Board of Education decision that effectively reversed the Plessy decision. New Orleans has a vital and popular tourism and festival culture, but it’s underpinned by a fierce desire for equality for all of its residents. 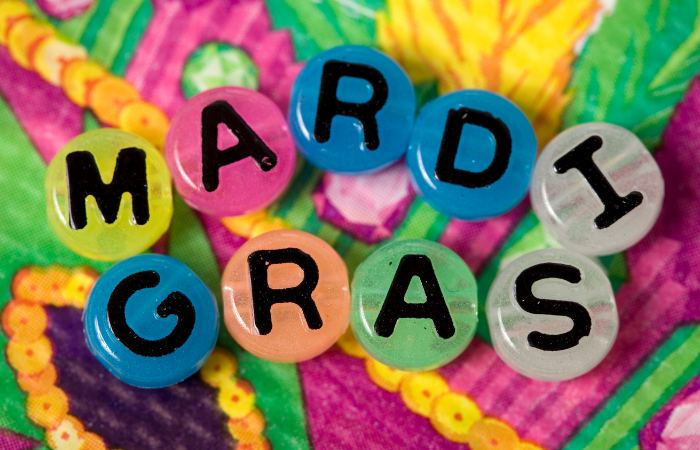 New Orleans is a popular tourist destination because of its unique cultural offerings and easily identifiable city spirit. A large percentage of its economy comes from the tourism industry. In turnt, the industry celebrates the city’s history and traditions, keeping them alive and perpetuating the city’s identity.

Mardi Gras gets top billing for New Orleans tourist destinations, but the bars, food, music, and history of the French Quarter are equal contributors to New Orleans’ distinct cultural flavor. A spiritual practice dating back to the early 1700s, voodoo also has a prominent place in the tourist industry.

The French Quarter is New Orleans’ best-known neighborhood and is one of the oldest. Most of its buildings date back to the early 18th century when French and Spanish colonial rule and culture were mixing. It was a stronghold for Creole culture when a new influx of Anglo-Americans was coming into the city.

Today, the Vieux Carré (Old Square, in English) is a popular place for tourists to take in New Orleans history and architecture. It’s also home to Bourbon Street, a long thoroughfare for bars and clubs. It is where many of the city’s festivals and parades take place, and open container laws allow visitors to drink alcohol freely in the open.

Bourbon Street is the heart of the city’s tourism. The city has historically shown the area preference in legal disputes and rehabilitation efforts after disasters like Hurricane Katrina.

While New Orleans has a reputation in popular culture as the voodoo capital of America, and has taken on a more commercial air, there’s still a deep currant of voodoo as a spiritual and religious practice in the city.

Voodoo first came to the city as a blend of traditional African religious practices with Catholicism. The particular strain of voodoo practiced in the city is widely known as Voodoo-Catholicism. Ultimately, this practice is about connecting with spirits and herbalism.

Famous voodoo practitioners in the city include Marie Laveaux, the Voodoo Queen of New Orleans, and Dr. John, a Senegalese enslaved man who was Laveaux’s teacher. Today, tourists can visit Laveaux’s grave and the New Orleans Historic Voodoo Museum in the French Quarter to learn more about the practice. 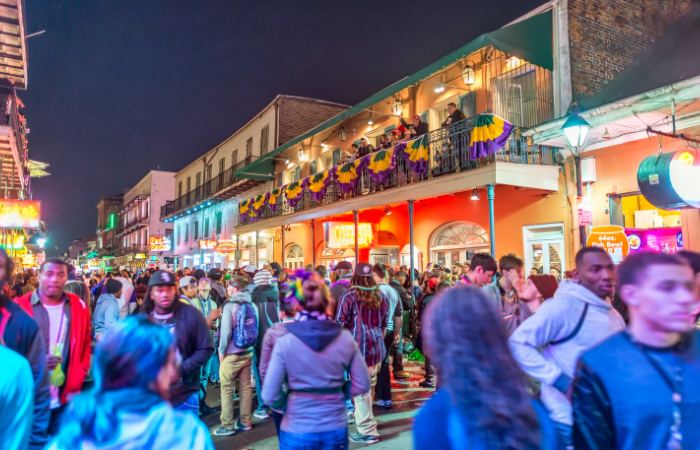 In New Orleans, Mardi Gras (also known as Carnival) isn’t just a day; it’s a season. The season starts on January 6th, the Feast of Epiphany, and lasts until the Tuesday before Lent. It’s a season rooted in the Christian calendar, but it has transformed over the years into a festival that defines New Orleans for many of its visitors.

The popular tourism image is the parade floats and reveling in the street. However, the festival season includes lavish private balls, king cakes, and the North Side Skull and Bone Gang. Mardi Gras is traditionally a feast to celebrate the luxuries and excesses of life before the deprivation of the Lenten season, and New Orleans does this well.

A staple of the Mardi Gras season is the ball scene. There are dozens of parade krewes who organize events that start in the streets and lead to lavish dances with opulent dresses. Many of them are private to the krewe members, but there are a handful of krewes open to tourists and the public. The public-facing parades are more well known, but the balls are just as traditional. 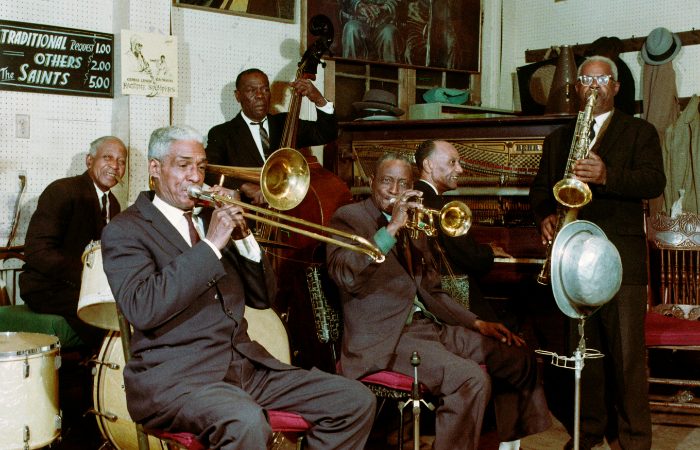 One of New Orleans’ nicknames, The Big Easy, comes from musicians in the early 20th century discussing how easy it was to find work in the city. New Orleans is the birthplace for both Louis Armstrong and the music that made him famous: jazz.

With ragtime and blues roots, jazz became the predominant popular music in the late 19th and early 20th centuries in America. Jazz music and culture are still strong in New Orleans, with the traditions expanding to include roaming brass bands and “jazz funerals.”

Like most of its culture, the musical influence in New Orleans is a blend of the musical traditions of the many different ethnic groups that make up the city. It was the only city in North America that allowed enslaved people to gather and play music together in public, paving the way for musical traditions from the Caribbean and Africa to mix freely with European and Latin music.

The New Orleans Jazz and Heritage Festival, known casually as Jazz Fest, is an annual celebration of jazz and its history in the city. It started in 1970 with local acts and has grown to include jazz artists worldwide. In the early days, performers played in Congo Square, but the festival’s size is now so large that it’s hosted on the fairgrounds instead. 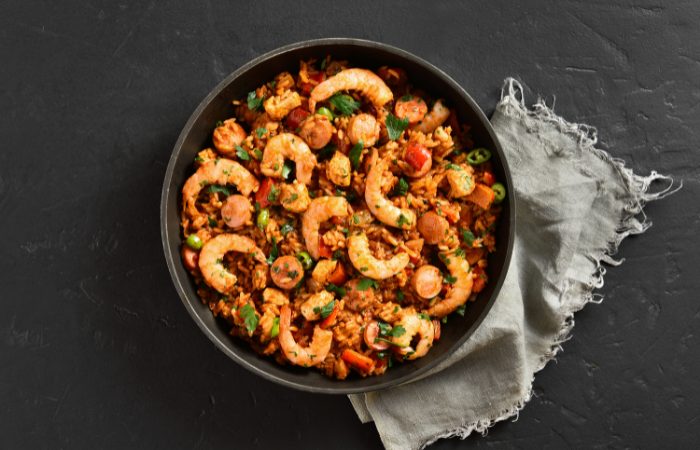 From the fairgrounds during Jazz Fest to the fancy restaurants on Bourbon Street, food in New Orleans has just as much flavor as the rest of the city. Much of the local fare comes from cajun and creole cooking, featuring plenty of seafood and spices.

Jambalaya and gumbo are two popular creole dishes found all over New Orleans. They both feature onions, peppers, celery, rice, and meat, usually sausage or seafood. The primary difference is that the rice is cooked in the broth and other ingredients, making the final texture more like a stew. Gumbo is cooked separately from the rice, with a soupier final texture.

Both have similarities to jollof rice, common in Africa, and paella, common in Spain. Because Africa and Spain both had a significant influence on New Orleans’ culture and cooking, either influence (or both) is possible.

Beignets, a square fried donut covered in powdered sugar, are a popular New Orleans dessert. They are a French colonial contribution to New Orleans cuisine, made famous by Cafe du Monde in the French Quarter.

New Orleans is unique in the United States in that it has one of the most unique and persistent regional accents and several localized dialects and languages. There are still people in New Orleans who speak Louisiana Creole (Kreyol Lwiziyen) and Louisiana French, though the numbers are dwindling.

The New Orleans accent has neighborhood variants, but it most likely comes from a blending of Southern accents with the Northeastern accents of American immigrants from New York and New Jersey and the accents from Caribbean immigrants and enslaved people. This accent is different from a Cajun accent or a traditional Southern accent, giving New Orleans yet another piece of culture all its own.

New Orleans doesn’t have much in the way of professional sports, but their football team — the New Orleans Saints —  is incredibly popular locally. The Saints won the Super Bowl in 2010, an event that the city cites as a sign of hope for a better future post-Katrina.

The city also hosts the Sugar Bowl or the New Orleans Bowl every year at the Superdome. The Superdome has been the site of seven different Super Bowls. 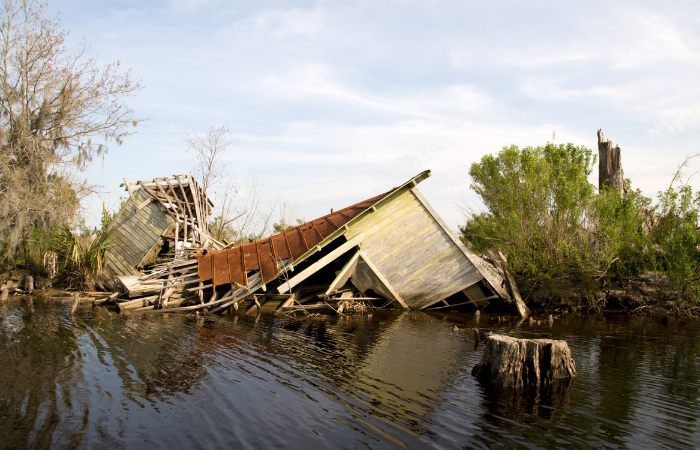 New Orlean’s location on the Gulf Coast and the Mississippi Delta has always put it at risk for floods and tropical storms. The naturally occurring levee known as the crescent historically protected residential neighborhoods from flooding with mixed success.

Despite the risks of the environment, the city persisted in its current location because of the economic advantages of being near major waterways. As technology developed, the city added more of the surrounding swampland to its borders, making formerly uninhabitable or dangerous areas safe.

Hurricane Katrina is the most famous flooding disaster in New Orleans ’ history. It was a historically powerful hurricane in 2005, and no city was prepared to weather it. Storm waters flooded over the city’s 23-foot storm protection walls leaving about 80% of the city covered in water.

Extensive failures in the city’s levee system contributed to the city’s devastation. Over a thousand people died, and over a hundred are still unaccounted for almost a decade later. Controversy surrounded the aftermath and rebuilding efforts, but the city has made significant recovery progress. 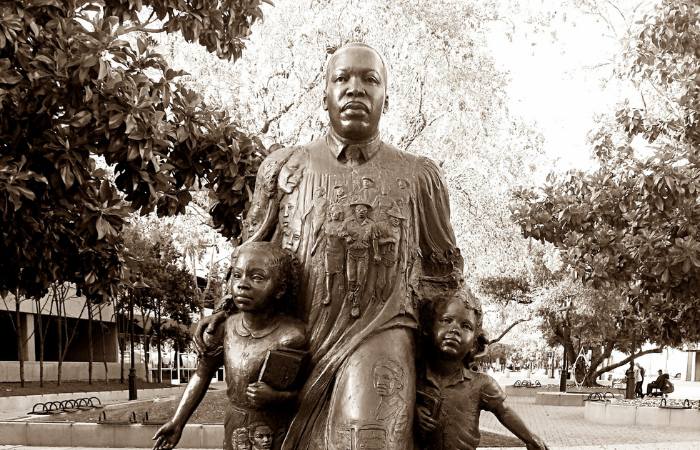 New Orleans is a perfect example of the American melting pot. The city’s history of colonial rule from several different nations and its role in the transatlantic slave trade brought many different cultures and traditions into one space. The culture of the city today is the result of all of those cultures blending over time.

The Louisiana city is known for its tourism, Mardi Gras, jazz music, and the recent devastation of Hurricane Katrina in 2005. The New Orleans identity is all of these things and more.