12 Cool Things Rochester is Known For 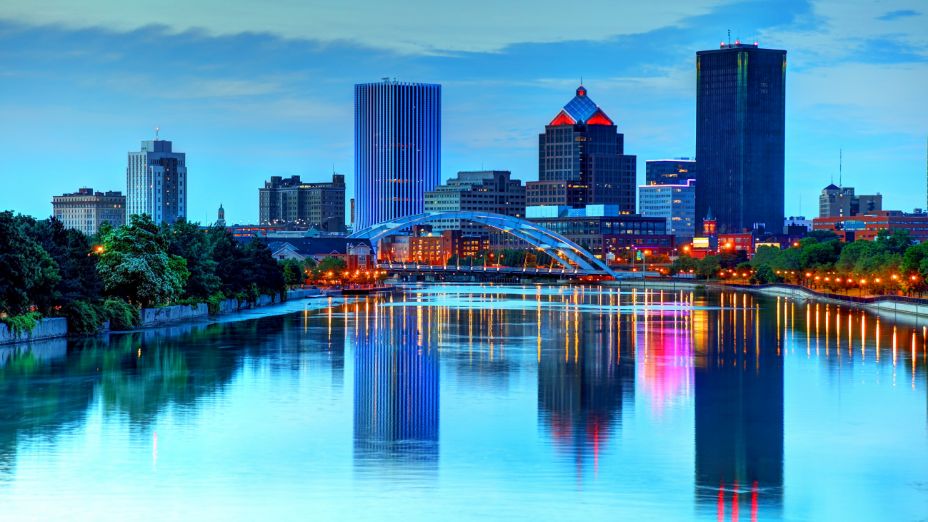 What Is Rochester, New York Known For?

Rochester, New York doesn’t get as much love as New York’s biggest city, nor is Rochester known for its spicy chicken wings. But New York’s third-largest city has more to offer than you might expect. While it has seen some hard times, Rochester has come back strong.

Rochester is known for it’s large population, many major corporations, and well-developed infrastructure. The city has a former Erie Canal stop, as well as many historic buildings, colleges, and cultural events. But while Rochester has come a long way from Rust Belt days, it still faces challenges with poverty and unemployment.

If you find yourself in Rochester, here are some facts that will help you better understand the city and give you some food and entertainment suggestions. 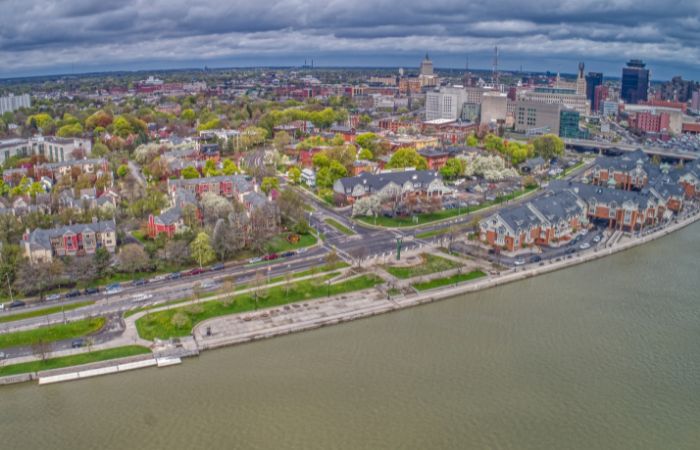 Rochester Is the Third-Largest City in New York

Neither of these figures looks very impressive next to the New York City metro area’s 20.3 million population. Still, they make Rochester and Buffalo the 51st and 49th most populated metropolitan areas in America. 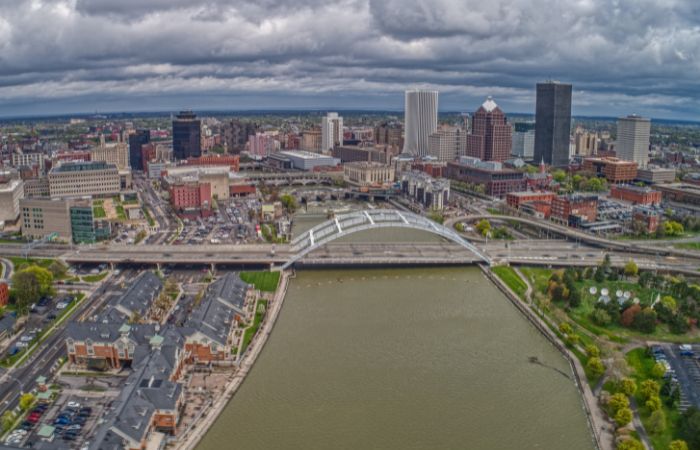 Rochester Is a Global City

As global cities go, GaWC ranks Rochester as “Sufficient.” Rochester is not as important as an Alpha++ city like New York or London, nor as big as Atlanta (Beta+) or Nashville (Gamma). But its economic and academic clout makes it self-sufficient. You can do a great deal of business in Rochester without needing services only available in a bigger city. 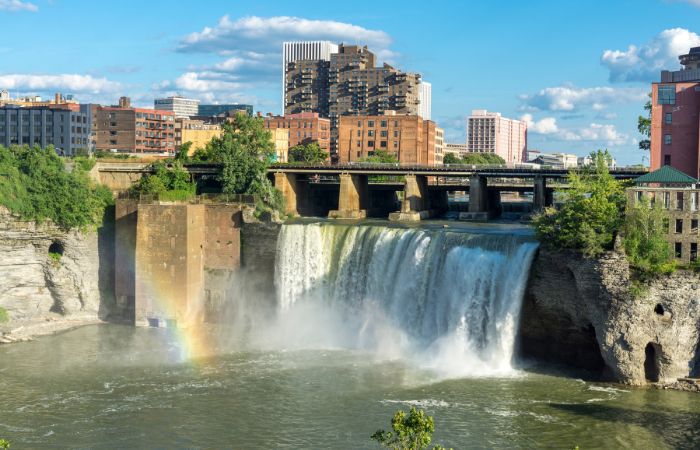 The Genesee River Made Rochester Rich

From its source amidst the sandstone hills of Ulysses Township in Pennsylvania’s Potter County, the Genesee River rolls over 600 feet (182.9 m) of waterfalls and over 150 miles (241.4 km) of the countryside before reaching Lake Ontario. When early settlers came to the Rochester area, they soon realized that hydropower could be put to good use.

The Genesee-powered flour mills gave Rochester its first nickname, the Flour City. The 1825 opening of the Erie Canal meant flour could now be shipped to Albany and down the Hudson to New York. Later, manufacturers would build clothing mills and tool fabrication plants on the Genesee.

Today the Genesee provides water for one of Rochester’s most beloved local businesses, the Genesee Brewing Company. Founded in 1878, Genesee supplies beer throughout the Great Lakes and the northeastern United States. Genesee’s 12-Horse Ale, named after the Belgian Roans who once pulled Genny beer wagons, received high reviews from beer enthusiasts. 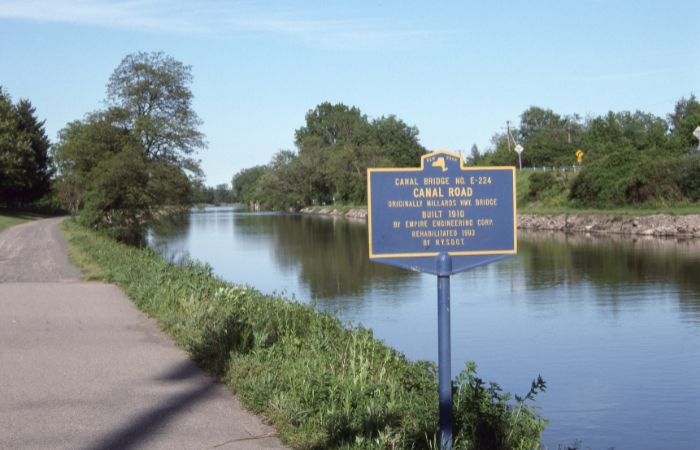 The Erie Canal Once Ran Through Rochester

The Erie Canal was an immediate success, and within a few years, expansions began. The Second Genesee Aqueduct replaced the leaky old aqueduct and brought a wider, deeper canal across the Genesee River in 1842.

All this traffic brought new people to the area: Rochester expanded on both sides of the Genesee. Thousands of tons of flour and later other goods flowed toward the Hudson. Then, in 1918, the Erie Canal was rerouted.

Canal traffic may have left Rochester, but more and more automobiles were filling its streets. In 1927 builders laid roadways, and the Aqueduct became the Broad Street Bridge. The now-dry canal was used for the Rochester Subway System, which shut down in 1956. 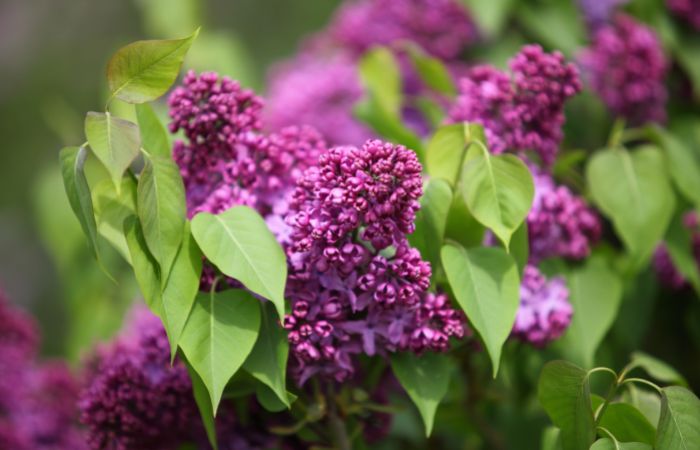 While some came to Rochester seeking their fortunes in the grain mills, others planted nurseries. In 1843 George Ellwanger and Patrick Berry owned 43 acres (17.4 ha). By 1860, they controlled over 500 acres (202.3 ha) of Rochester land. Ellwanger and Berry got rich selling seeds and cuttings, and the “Flour City” became the more dignified “Flower City.”

By 1918 Ellwanger and Berry were out of business. But the park they established to showcase their wares, Highland Park, remains a Rochester centerpiece.

Since 1898 Rochester has held a Lilac Festival. The Lilac festival brings over 500,000 people to Rochester each May and features over 200 varieties of lilacs and other flowers, trees, and shrubs.

If you’re not interested in lilacs, the Lilac Festival also offers a 5k/10k (3.1 miles/6.2 miles) Lilac Run, a Lilac Brewfest, wine tasting, and a farmer’s market. And the Lilac Neighborhood, the area between Highland Park and Mt. Hope Cemetery (final resting place of Susan B. Anthony and Frederick Douglass), also has a 22-room replica of a Scottish castle, the Warner Castle at 5 Castle Park. 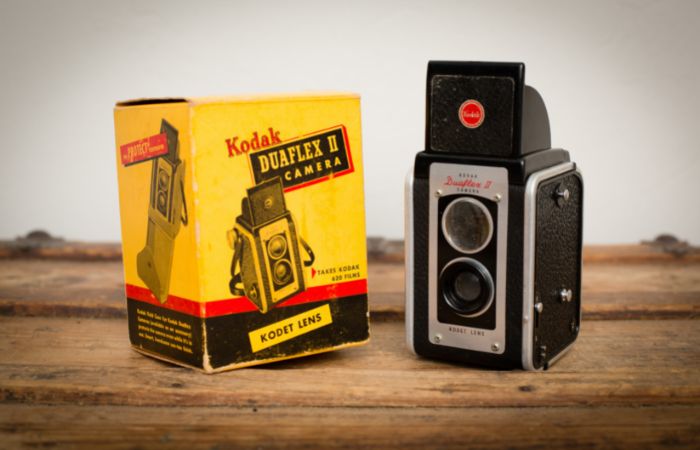 Rochester Is the Birthplace of Kodak Film

In 1884 photographer George Eastman patented the first practical roll film. In 1888 he created a personal camera that used that film. No longer would amateur photographers have to rely on heavy glass plates. Eastman trademarked his invention using letters he thought sounded memorable and catchy, so in 1892, Eastman Kodak was born.

Film cameras have fallen out of fashion, and in 2012-13 Eastman Kodak restructured in bankruptcy. The new and much smaller Eastman Kodak continues to struggle on the stock market. But you can get a look at Eastman Kodak’s glory days at the George Eastman Museum, which is known as the world’s oldest photography museum, on 900 East Avenue. 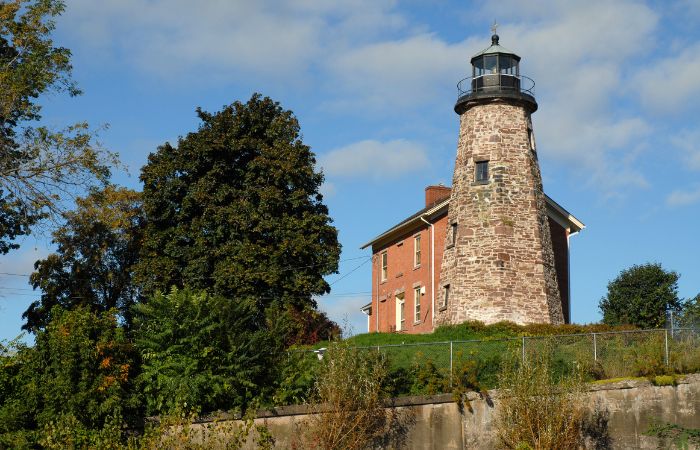 Lake Ontario is the smallest of the Great Lakes but still larger by area than the entire state of New Jersey. The citizens of Rochester enjoy all the benefits that come with living by the world’s 14th largest lake. Ontario Beach Park, located in Rochester’s northwestern quadrant, offers 39 acres (13.8 ha) of excellent sandy beaches.

Among Ontario Beach Park’s attractions are a 1905 carousel, a playground, concession stands, softball fields, and six volleyball courts. The park offers swimming, boating, and fishing opportunities. In the summer, the Performance Pavilion hosts Concerts by the Shore.

With so much beautiful nature nearby you’ll surely want to get out and explore. Check out this guide with the best hikes in the Rochester area. 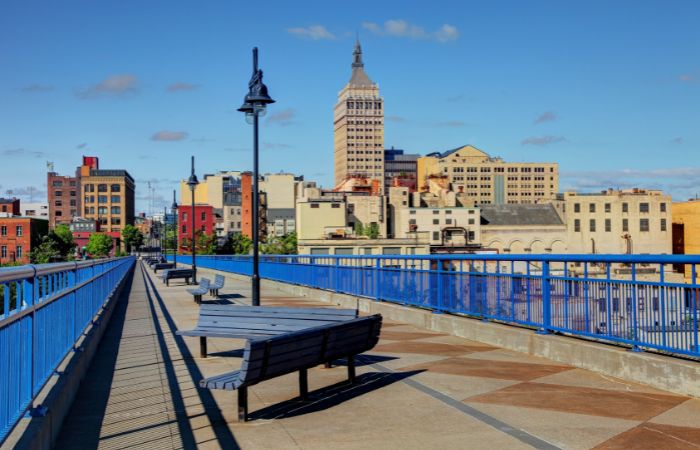 Jack Benny’s Butler Was Not From Rochester

For most of the mid-20th century, Americans who heard “Rochester” would think immediately of Jack Benny’s raspy-voiced butler Eddie “Rochester” Anderson. But Anderson grew up in San Francisco, where he got his start dancing in vaudeville reviews.

Neither Benny nor Anderson remembered how they settled on Rochester’s name, but it stuck. In 1953, when the Jack Benny show moved to television, everybody knew Eddie Anderson, then America’s highest-paid Black entertainer, as “Rochester.” Though he neither came from nor was named after Rochester, New York, Anderson deserves due credit for putting it on the map. 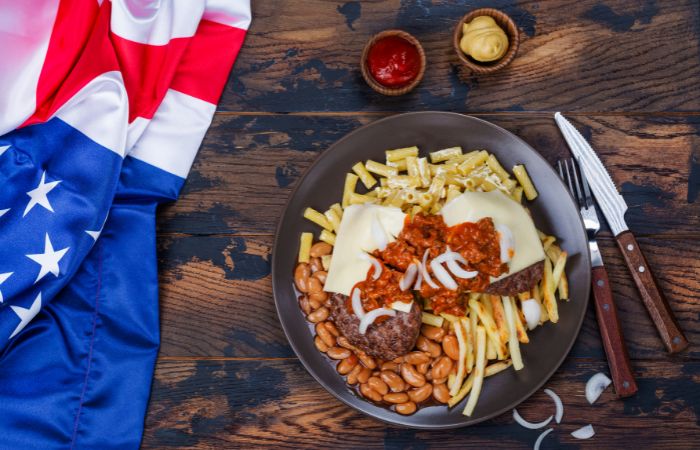 Food Rochester is Known For: White Hots and Garbage Plates

“Hots” is Rochester slang for hot dogs. “White hots” are one of Rochester’s signature foods. Unlike a regular salmon-pink hot dog (called a “red hot” in Rochester), white hots are made with uncured pork, beef, and veal. White hots started among Rochester’s large German community in the 1920s and are an American version of bockwürst.

A garbage plate starts with home fries, beans, or macaroni salad. (Many hungry diners begin with two or more choices.)

Atop this, the cook places a cheeseburger, hamburger, Italian sausages, grilled cheese, fried fish, white or red hots, or eggs. This plate is then garnished with mustard, onions, and hot sauce to your preference.

Nick Tahou Hots on 320 W. Main Street is the garbage plate’s birthplace. While many Rochester restaurants offer their version, the original Nick Tahou Garbage Plate lives on after Tahou’s 1997 passing. (In a nod to modern times, they now provide a veggie garbage plate too!) 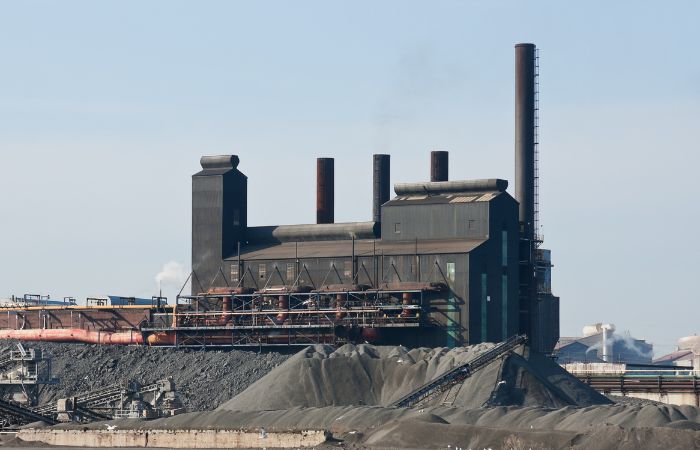 During the late 1970s and 1980s, America’s manufacturing industries declined tremendously. The Great Lakes area was particularly hard-hit and came to be known as the Rust Belt. Rochester did better than their neighbors in Pennsylvania, thanks to three key Rochester companies: Kodak, Xerox, and Bausch & Lomb.

But though these companies weathered the Rust Belt Era, things declined later. Digital photography sent Kodak into bankruptcy. The Xerox Tower on 100 Clinton Avenue South is all that remains in Rochester. And in 2013, a Canadian pharmaceutical company acquired Bausch & Lomb and laid off hundreds of Rochester employees.

While Rochester has had some rough years, things are looking up. In April 2020, COVID sent unemployment in Rochester to 16.0%. As of April 2021, Rochester’s unemployment was down to 6.0%. 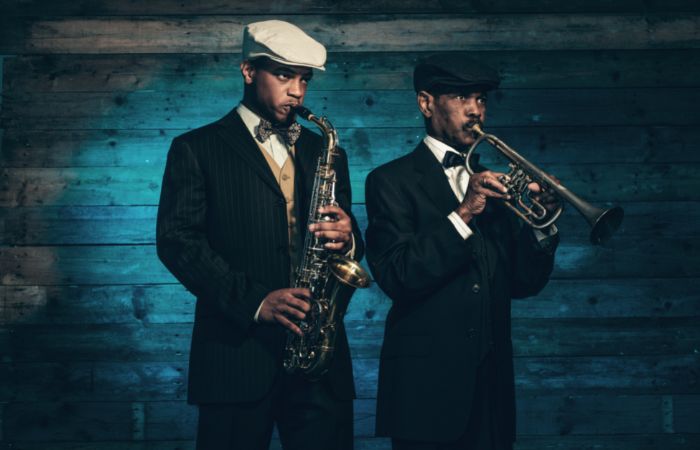 Rochester Hosts One of the World’s Leading Jazz Festivals

Since 2002 June has been jazz month in Rochester. The Rochester International Jazz Festival has welcomed jazz giants like Dave Brubeck, Oscar Peterson, Norah Jones, Chick Corea, and Herbie Hancock. But they have also found room for soul and R&B legends like Aretha Franklin and Patti Labelle and rock musicians like King Crimson and Elvis Costello.

Many Eastman Music alumni have gone to successful jazz careers. Jazz Grammy-winners Maria Schneider, Ron Carter, and Steve Gadd (who won a Grammy nomination for his 2016 Way Back Home: Live from Rochester, New York) are all Eastman graduates. If you want to find jazz in Rochester, you can always rely on JazzRochester for upcoming performances.

The Rochester Jazz Festival was postponed for 2020 and 2021 due to COVID-19. Here’s hoping the 2022 festival brings in large, enthusiastic crowds. 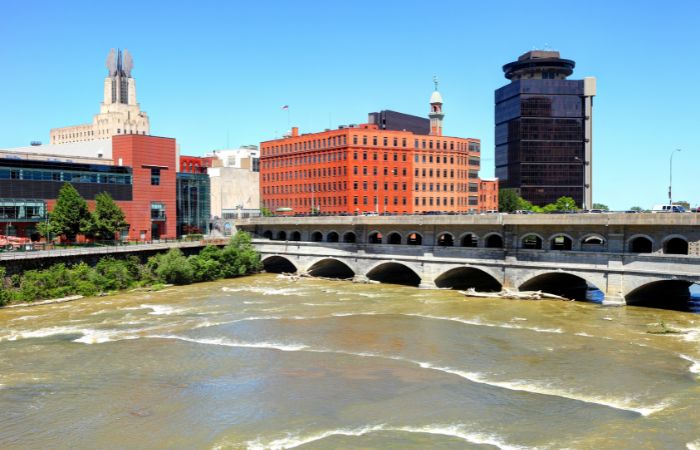 Rochester Is One of America’s Most Affordable Cities

Given its thriving social and academic scene, you would expect expensive real estate. But for all its amenities, housing costs in Rochester remain among the nation’s most affordable. In 2019 the average Rochester home cost $141,808—considerably lower than the national average of $232,933.

But not everything is cheap in Rochester. Rochester’s property taxes are among the highest in the nation. And Rochester winters can be brutal. You may get a great deal on that big Victorian home, then spend more than your mortgage payment keeping warm during the winter months. 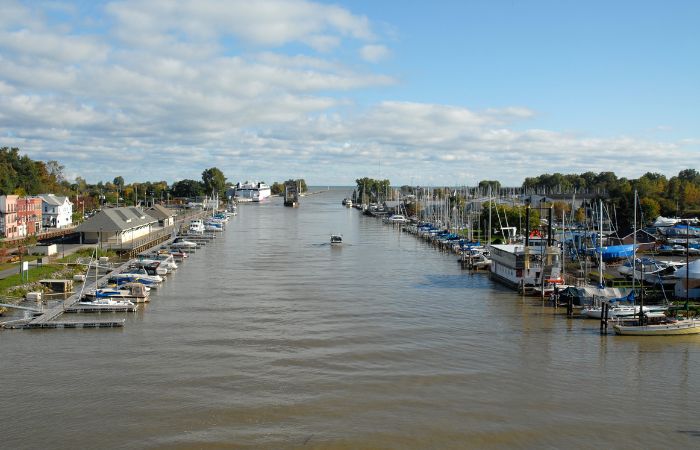 If you’re looking for a mid-sized American city with a vibrant cultural scene, a fascinating history, and garbage plates, Rochester, New York, may be the place for you. It may not be so big as it was in its glory days, but there’s a lot to love about Rochester.