17 Interesting Things Calgary is Known For 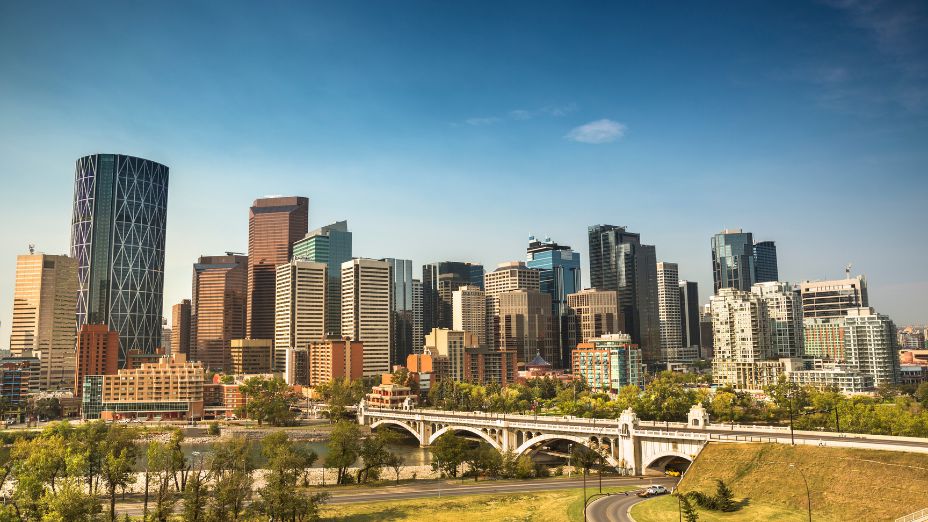 What Is Calgary, Alberta Known For?

Calgary, Alberta is known for its unique history, connection to sports, rich culture, yearly events, and beautiful outdoor recreation. The 1988 winter Olympics were held in Calgary, which is where the first Jamaican bobsledding team made their debut.

Read on to learn more about the history of this beautiful city, as well as its current way of life. 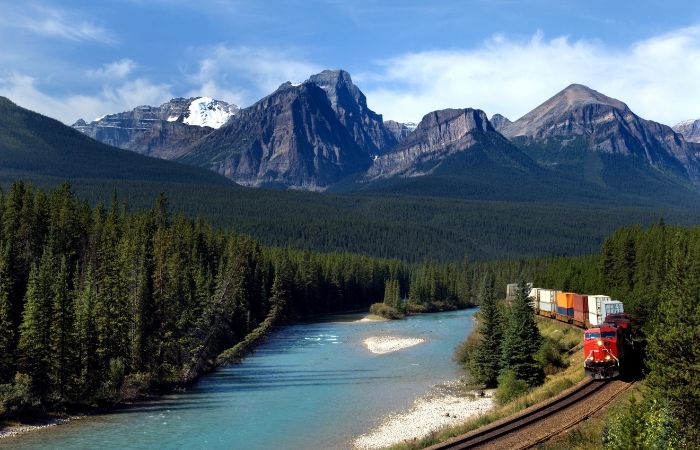 Calgary was founded in 1875, officially being named Fort Calgary in 1876. It officially became a town in 1884 and rapidly grew after the fact. It started with only a few hundred settlers and quickly grew to several thousand.

Calgary had initially been a farming town but was greatly expanded after the Canadian Pacific Railway added the village as a stop on their route. After the railway was established, Calgary became known as a “cow town” due to its connection to the cattle industry. 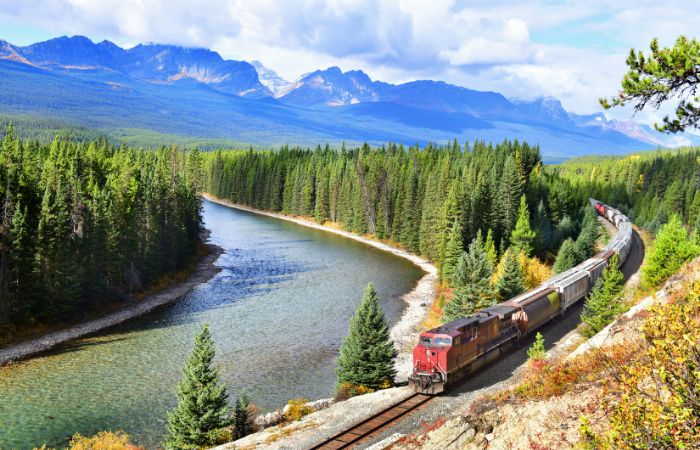 The Canadian Pacific Railway, or CPR, established a connection between Calgary and Edmonton in 1891, which led to thousands of farmers moving to the Calgary region, significantly increasing its population.

Today, the company that owns the Canadian Pacific Railway is branded as CP and they have their headquarters in Calgary.

In 1886 political strife in the town council caused much dysfunction in the government. Due to this, a firetruck was delivered to the town that no one was able to pay for, and it remained there until November 7th, 1886, the date of the great fire.

Fortunately, they were able to use the firetruck in a state of emergency, which greatly helped stop the spread of fire, with only eighteen buildings damaged in the catastrophe.

After this event, most buildings in the town were built with fire-proof materials such as sandstone. 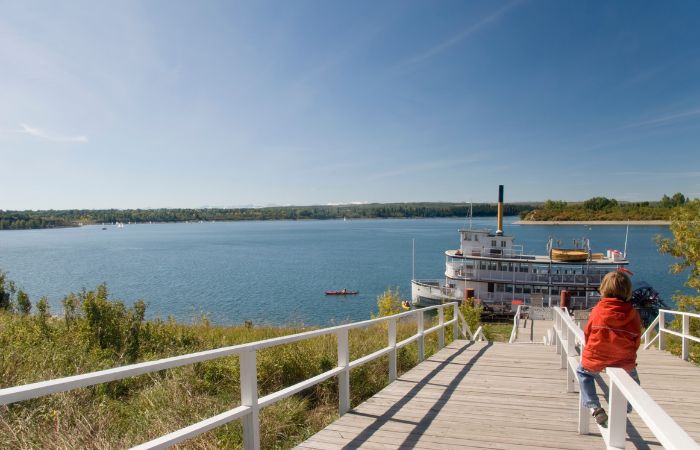 History lovers will delight in a trip to Heritage Park, which opened July 1st, 1964, and has grown to be one of North America’s largest living history museums. With approximately 500 employees and over 1,800 volunteers, Heritage Park aims to preserve the history of the land and provide education for people of all ages.

The park is located on 127 acres (51.40 hectares) of land and hosts over 200 exhibits and attractions. You can take self-guided walking tours, or tour the park on the train.

The replica of the S.S. Moyie, a sternwheeler built in 1898, runs on the lake during the summer months. 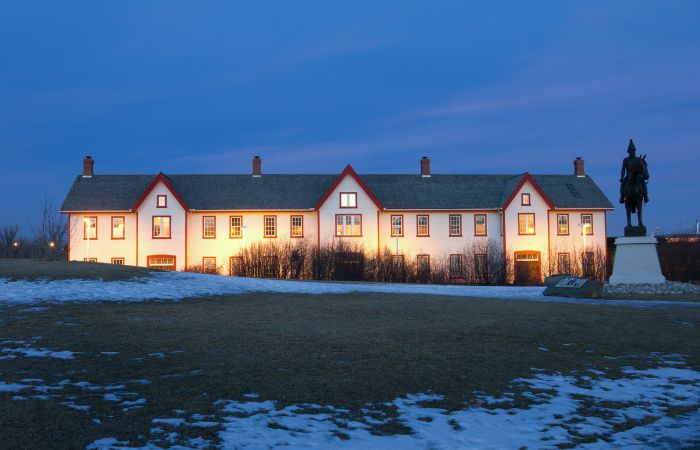 Fort Calgary is the original wooden fort that started Canada’s presence in the area of land.

Before being settled by Canadian police, it was occupied by Indigenous peoples. Fort Calgary was the beginning of the city we know today. The Northwest Mounted Police built the fort to make treaties with Indigenous peoples and monitor the illegal whisky trade.

The replica of the original fort is currently open as an interpretive center teaching about the lives of those who settled the area in the past. Fort Calgary offers programs for all ages, and Royal Canadian Mounted Police Veterans are available on-site to answer any questions your family may have.

Check out this Calgary travel guide!

Today, sports are a large part of the culture in Calgary.

In addition, several big sports events have been held in Calgary in the past, and they are also home to Canada’s Sports Hall Of Fame. 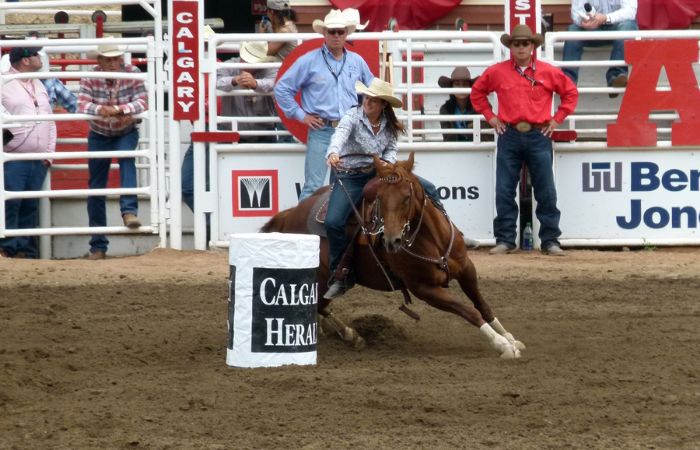 Also known as “The Greatest Outdoor Show on Earth,” the Calgary Stampede is a rodeo and outdoor festival that lasts for over a week. In addition to the rodeo, they have live music, food and drinks, a parade, shopping, and more.

If rodeos aren’t your style, you can check out the Evening Show, which features live music and performances from several different performers and finishes with a grand fireworks show.

The Calgary Flames were founded in 1980 and had their first game on October 9th of the same year. The team had resounding success the decade following their debut and continues to have the city’s support.

Today they play in the Scotiabank Saddledome.

If you’d like to watch a game, tickets can be purchased on the Flames’ website. The Saddledome seats over 19,000 guests and premium seating arrangements are available for hockey super-fans.

Before the game begins, you can catch a bite to eat at the Saddleroom Grill or The Club Buffet. The Calgary Stampeders played their first game in 1945 and have grown over the years. Thirty-eight players have received the honor of joining the Canadian Football Hall of Fame.

The team has also participated in the Grey Cup fifteen times.

The Stampeders have played at McMahon Stadium since 1960. Over the years, the stadium has gotten many upgrades, including additional seating, aluminum benches, and new scoreboards, making for a very comfortable game-viewing experience.

Fans can purchase game tickets on the Stampeders’ website. 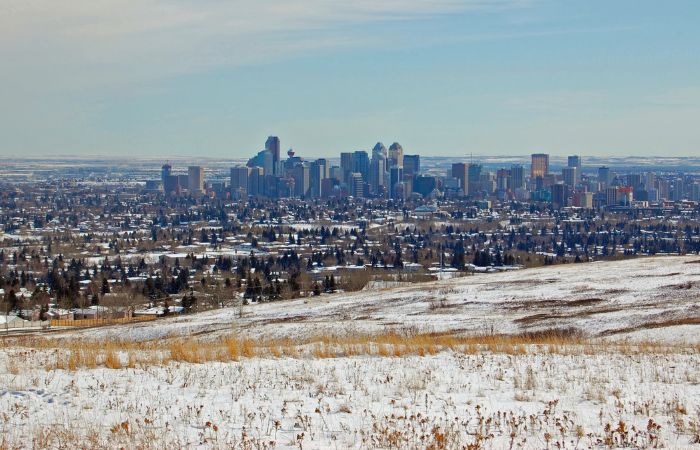 “Cool Runnings” was a movie based on the true story of the first Jamaican bobsledding team, and they debuted during these winter games in 1988.

While Canada only placed 13th in the games, it was a big first step for Canadian athletes. Rob McCall and Tracy Wilson were the first Canadians to win a bronze medal in the Ice Dance event.

In addition, Calgary was one of the first cities to have “medal parties,” where medals were awarded at night alongside dancing and music. The Calgary Winter Games had a big impact on Canadian sports fans. 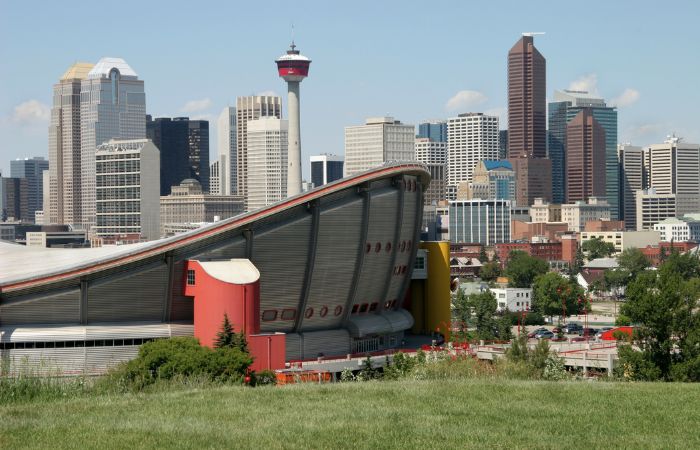 Calgary is home to Canada’s Sports Hall of Fame.

The sports museum was established in 1955 and features approximately 700 people in their Hall of Fame. Canada’s Sports Hall of Fame is a charitable organization focused on educating people on the benefits of sport in their country.

It features 65 different sports and 12 galleries that feature sports memorabilia on display as well as interactive exhibits. In addition, the Hall of Fame has a traveling exhibition and several online exhibits. 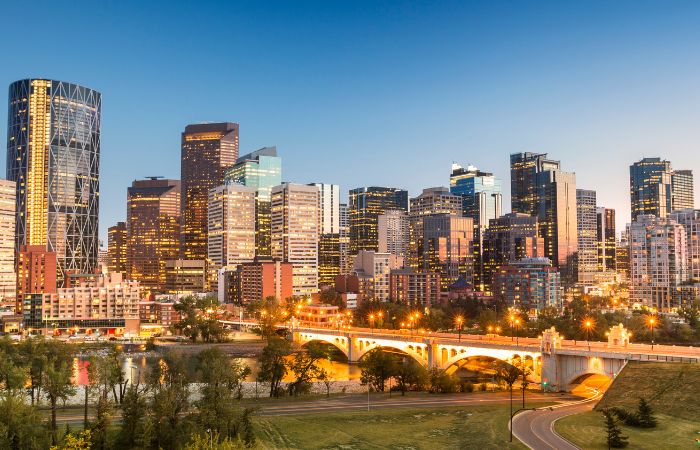 Calgary’s population is diverse, which leads to varied cultures within the city, and encourages festivals, public art, and opportunities for local artists.

Calgary has been rated the number one most livable city in North America and the 5th in the world. The quality of life can be attributed to many factors, such as: 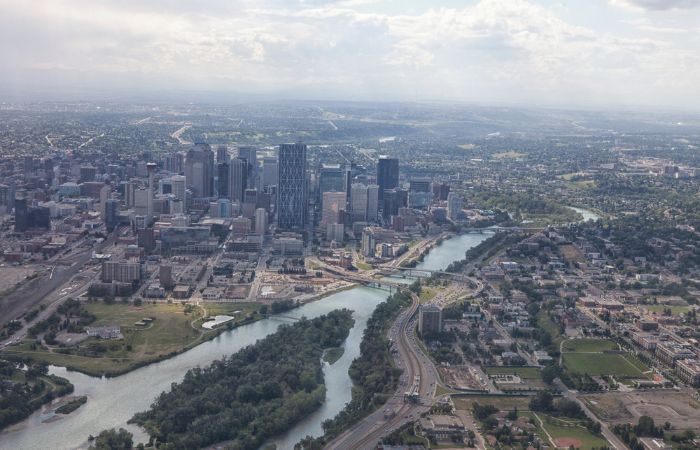 In fact, Calgary is implementing a plan to make the city welcoming for people of all cultures.

The Cultural Plan for Calgary is a plan to increase cultural tourism and foster diversity and cultural activity in daily life. 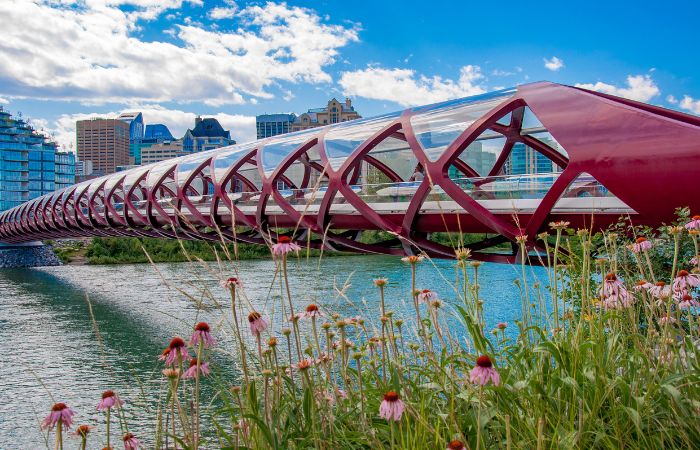 Fans of the visual arts have many galleries to choose from in Calgary.

Glenbow Museum is a non-profit museum of the arts dedicated to providing the arts to people of all backgrounds. It boasts a collection of over 33,000 works of art and is one of the most extensive collections of Indigenous art in the country.

Meanwhile, Contemporary Calgary is a collection of local, national, and international modern art. They believe that art should be “relevant, meaningful, and challenging.”

The gallery has several different exhibits, including works of photography, videos, murals, and more. The gallery is accessible by public transport, making it easy for people of all backgrounds to visit.

Calgary is home to many other galleries in addition to these two, including Gibson Fine Art, Newzones Gallery of Contemporary Art, and Stephen Lowe Art Gallery. No matter which gallery you visit, art appreciators are sure to love the many things Calgary has to offer.

If you’re more interested in performing arts, Calgary has a wonderful theatre scene as well. Theatre Calgary was founded in the 1960s and is dedicated to providing professional theatre to the city. They host shows ranging from classic Shakespeare to modern hits.

Alberta Theatre Projects is another theatre centered around providing new points of view.

The theatre focuses on diversifying its staff so all people can feel represented by their organization. Alberta Theatre Projects is a not-for-profit professional theatre company that produces both Canadian and international shows.

Of course, these aren’t the only two theatres in the city.

If neither of those catches your fancy, or if you’d just like to visit multiple theatres, there are many to choose from. Check out Theatre Junction, Loose Moose Theatre, and Storybook Theatre for even more options. 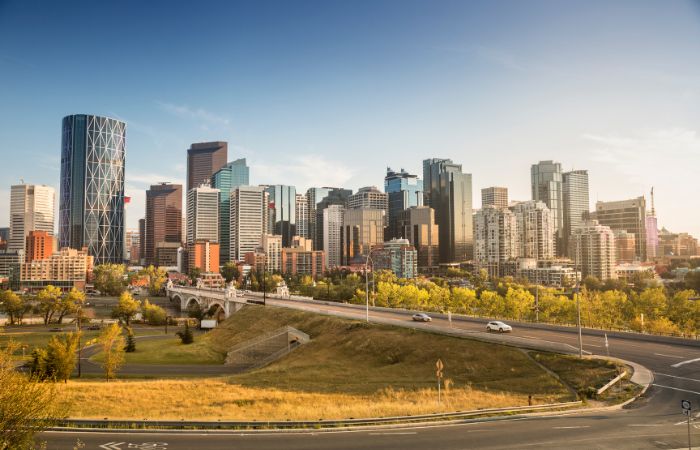 Recreation and Outdoors in Calgary, Alberta

With its beautiful mountain setting and approximately 333 days of sun per year, Calgary makes an excellent destination for outdoor enthusiasts. It’s also a great location for families, with child-friendly attractions such as Calaway Park and Calgary Zoo.

No matter what you’re looking for, Calgary is sure to have something that appeals to you.

This amusement park, known as “Western Canada’s Largest Outdoor Family Amusement Park,” opened its doors in 1982. Since then, it has become a beloved destination for people of all ages.

The rides range from easy-going to thrill-seeking, and when you’re done with rides, you can catch a bite to eat at Timber Falls Pizza Co. or Burger Bistro. Finish the day by seeing a live show or doing some shopping at the gift shops.

The Calgary Zoo is a great choice for families but can be enjoyed by people of all ages.

It has 119 species and almost 1,000 individual animals and is accredited by the Association of Zoos and Aquariums, so you can rest easy knowing it’s an ethical home for the animals.

With eight different animal destinations, you’re sure to find a creature you love. Classes of animals include amphibians, birds, fish, invertebrates, mammals, and reptiles.

Animals are separated by their original region. 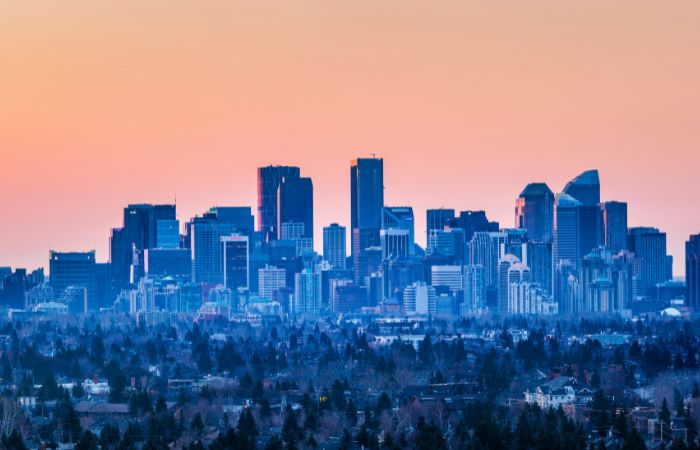 If you’re an active person, make sure to check out WinSport. This park offers activities such as mountain biking, ziplining, and minigolf. Activities change depending on the season- winter activities include tubing and snowboarding.

You can purchase single-day tickets or season passes.

WinSport also offers lessons and camps for various sports and is the home of Canada’s Sports Hall of Fame.

Whether you want to try some basic bouldering or take a family lesson, Calgary Climbing Centre has got you covered. They also have programs for small children in addition to birthday parties and team-building activities. 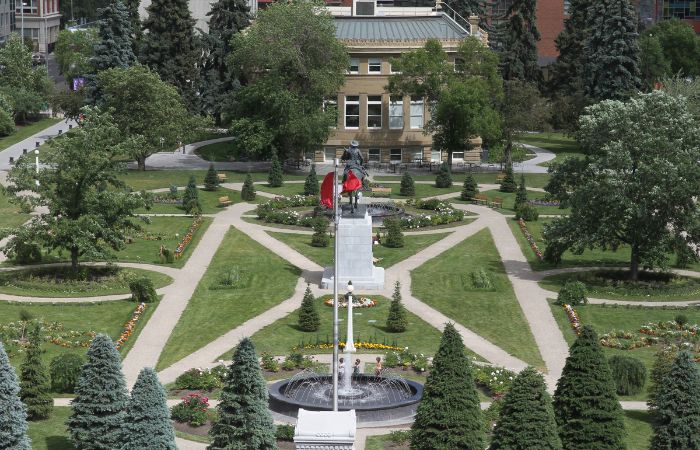 Calgary is a city that attracts many kinds of visitors. It has a rich history and plenty of tourist attractions and lesser-known local gems. Calgary is very much an athletic city, so sports fans are sure to love it.

However, that doesn’t mean there isn’t anything else to enjoy.

Arts lovers are sure to enjoy the local galleries and theatre options. Families have plenty of options as well. No matter who you are or what you enjoy, you’re sure to find something for you in Calgary, Alberta. It’s a great destination that should be on any traveler’s bucket list.

If you’re planning a trip to Calgary be sure to check out this book of Calgary travel tips.