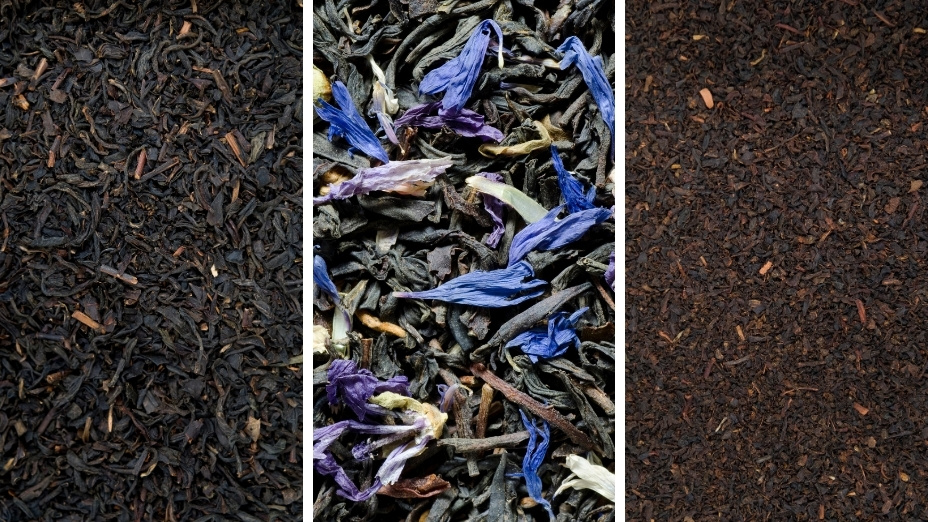 Tea is one of the most beloved and commonly consumed beverages in the world. For modern tea lovers across the globe, it is important to understand the different variations of tea from which to choose. This will make your tea-drinking experience more enjoyable and delicious.

While all equally delicious and invigorating, each of these types of tea has its own unique taste and story to tell. To learn more about the varying differences between Orange Pekoe, English Breakfast, and Earl Grey tea, continue reading below.

Why Orange Pekoe, English Breakfast, and Earl Grey Are Different

While Orange Pekoe, English Breakfast, and Earl Grey teas are all black teas originating from the same tea plant, they do have their distinct differences.  Some of these basic differences are outlined below:

These differences, noted in the table above, come about based on a few different factors.

While the actual tea leaf from the Camellia Sinensis plant starts out the same, the teas that result in the cup are quite different.

Examples of How Teas Differ in the Cup

The conditions above can account for likenesses and variances between each of these black teas. For instance:

And that’s just a start. To learn more about how each of these teas compares, we’re going to take a closer look at each type, comparing and contrasting along the way.

All About Orange Pekoe

Contrary to popular belief, orange pekoe tea is not a tea flavored with oranges. It isn’t a flavor or a specific blend – it is a black tea that is classified based on the size and quality of the leaf itself. While it’s not the top-quality, full tea leaf, it isn’t the dust and fragments, either.

In the tea industry, any medium-grade black tea is referred to as Orange Pekoe.

Orange Pekoe tea is made up of only the newest tea flushes available. A tea flush is a bud of a tea leaf found at the top of the plant that is sometimes discarded, but in the case of Orange Pekoe, it ends up picked alongside the two smallest and youngest tea leaves of the growing tea plant.

The Origin of Orange Pekoe

The meaning of ‘pekoe’ is a descriptor for white soft hair or fuzz, given to the Orange Pekoe tea thanks to the small soft hairs that grow on the undersides of the tea plant’s smallest and newest leaves.

The name of Orange Pekoe tea also got its name from the House of Orange-Nassau, the name of a Dutch nobleman that brought this type of black tea to Europe from Nassau in the early 18th century. Grown almost exclusively in Sri Lanka, Orange Pekoe tea can also originate in Nassau and India.

While Orange Pekoe isn’t “flavored” like Earl Grey and isn’t a particular blend like English Breakfast, its taste can differ depending on where the tea leaves originate from. Your Orange Pekoe tea might have a slightly different flavor profile or base taste.

Tea grading isn’t a perfect science and it isn’t consistent throughout the world or even grower to grower. But there are a wide variety of Orange Pekoe designations found in the tea world and their acronyms tell you something about what your final cup will taste like. From plain, old ‘OP’ to the more descriptive and highly-ranked SFTGFOP 1: Special Finest Tippy Golden Flowery Orange Pekoe One.

A cup of Orange Pekoe tea that is not diluted with any sugars, milk, sweeteners, or additives has around 34 mg of caffeine per eight-ounce cup of tea.

This means that compared to your typical cup of English Breakfast Tea, Orange Pekoe black tea has about 10 mg less caffeine.

Revered for its high caffeine content, English Breakfast tea is one of the most iconic and recognizable tea types in the world. Enjoyed by tea drinkers in almost every country,

English Breakfast is most commonly drunk with milk or milk alternatives and honey or sugar. Its taste can vary slightly depending on the company it is manufactured by and the teas chosen to create the blend.

The Origin of English Breakfast

Rather than originating in England like its name might imply, English Breakfast tea actually came from the Americas when English colonial settlers broke away from Britain and began brewing tea with black Congou and Pouchong leaves in the early 1800s.

The Taste of English Breakfast

English Breakfast tea has a distinct flavor that cannot be replicated by any other type of black tea. Known as a strong, deep, and robustly flavored tea, it is known to be decidedly:

Because of its full-bodied flavor, English Breakfast tea often benefits from milk and sugar to balance out the cup.

So, based on what we know so far, here are some comparisons:

English Breakfast differs from Earl Grey mostly in that its blend does not contain any Bergamot. When adding Bergamot to any black tea or already existing black tea blend, the tea can end up tasting much more like Earl Grey. Now, for a deeper look into Earl Grey.

Earl Grey’s main similarity to English Breakfast and Orange Pekoe tea is that it is a black tea, with the main difference that it is flavored with Bergamot.

Bergamot, otherwise known as Citrus bergamia, is the bergamot orange. This is the oil at the center of Earl Grey’s signature taste.

The Origins of Earl Grey

Earl Grey tea is named after the famous Second Earl and Prime Minister of Britain, Sir Charles Grey. Grey held these posts from 1830 to 1834 and is now most known for drinking black tea infused with freshly squeezed bergamot. First referred to as “Grey’s Tea,” it became the symbol and affectionately consumed beverage for the wealthy upper class.

Nowadays, Earl Grey is consumed by all and usually contains synthetic bergamot oil rather than real, fresh bergamot. It can also be ordered in various forms, such as an Earl Grey Tea Latte, or London Fog, which is comprised of the following:

With a bold and buttery taste, Earl Grey is a citrusy black tea with a very strong and distinct smell. While some people claim that Earl Gray tastes a little bit like a few popular children’s cereals, including Fruit Loops and Cocoa Puffs, notable flavor notes of Earl Grey tea include:

While Orange Pekoe has 34 mg and English Breakfast contains 42 mg, Earl Grey tea boasts 40 mg of caffeine per cup. While this does not surpass the caffeine levels of English Breakfast tea, Earl Grey is still considered one of the more highly caffeinated teas for adding a non-coffee jolt to your morning.

A note about caffeine: Like other black teas, the caffeine content in your cup of Earl Grey will depend on how long it is steeped for, with a typical steeping time being 3 to 5 minutes.

Earl Grey, like English Breakfast, has over 40mg of caffeine per 8-oz cup. This makes it an excellent cup of wake-up tea to have with Breakfast. Both teas retain their high caffeine content due to the location in which they are grown, their similar drying process, and because their tea leaves are not diluted by other spices as much as the leaves of Orange Pekoe are.

All Three Black Teas Offer Something a Little Different

Whether you opt for Orange Pekoe, English Breakfast, or Earl Grey tea, each has a unique experience to offer. While all black teas, the flavor notes of all three differ greatly from each other and supply the drinker with a different amount of caffeine per cup. If it’s time for you to put down the coffee and try something new, any three of these teas are sure to make your day.