Top 15 Things Florida is Known For & Famous For 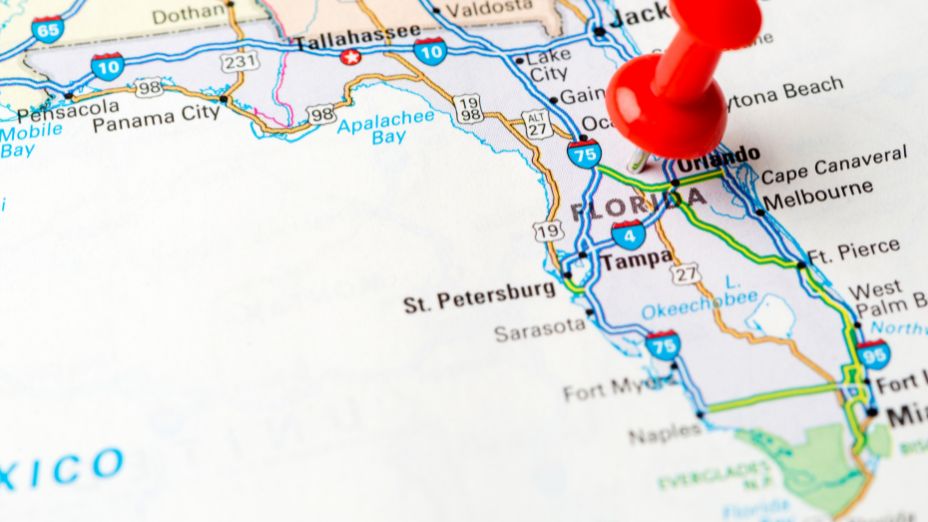 What the State of Florida is Known For and Famous For

If you’re thinking of visiting Florida, you might be wondering what there is for you to do. What historical landmarks should you visit, and what exactly is Florida state known for?

Florida state is known as the Sunshine State, and for being the amusement park center of the world. Before Disney World, multiple theme parks were built to entertain the people. Besides this, it also has limitless beaches, perfect weather, and a lot of natural scenery and history.

To learn more about the history of Florida and what it is famous for, keep reading! 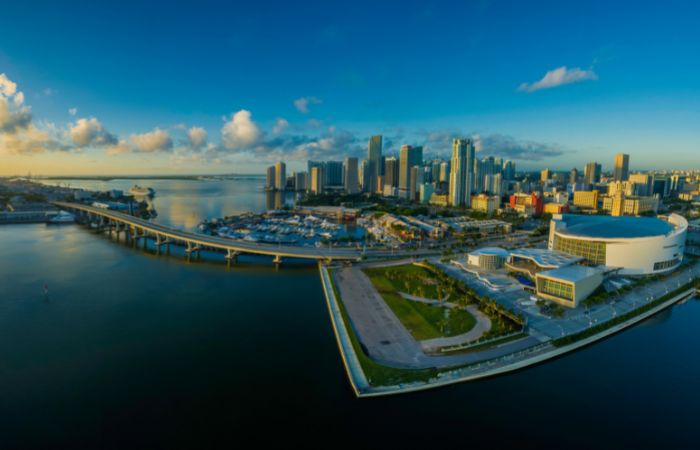 What Is Florida Famous For?

Florida is famous for its oranges, cattle, and rare horses, all of which date back to Spanish colonization, from when Juan Ponce de Leon first arrived on the coast of Florida. The state is also known for its amusement parks and summery weather.

Let’s take a look at how Spanish colonization impacted Florida’s culture and how it became known as the amusement park state.

The Origin of Florida

It begins with the origin of Florida, when it was under Spanish colonization, known as ‘La Florida.’ In 1513, Spanish explorer Juan Ponce de Leon arrived on the northeastern coast of Florida.

He brought with him oranges, cattle and horses. This would go on to shape Florida’s agricultural industries and culture immensely.

The Spanish established the first orange groves in 1579, at St. Augustine. The seeds left behind went on to form the basis of the modern citrus industry in Florida. Today, these juicy oranges are used to provide more than 90% of the orange juice drunk throughout the United States.

You might also have heard of Florida’s cracker cattle, which provide good-quality beef. These cattle are the descendants of Andalusian cattle brought over by Ponce de Leon. Major cow raisers like Jacob Summerlin Junior, nicknamed the ‘King of the Crackers’, owe their entire businesses to the Spanish.

Florida’s cracker horse might be a name that is less familiar to you than its cattle. This horse is quite rare to find, even in Florida, because it wasn’t bred enough. Nevertheless, the cracker horse is used for herding the aforementioned cattle. It is a fast, gaited horse that is rather lively and spirited.

The next time you drink your orange juice, you’ll know that it was made with an orange from Florida, which was gifted by the Spaniards.

Beyond its history, Florida is also nicknamed the ‘Sunshine State’ for its summery weather. With the promise of beaches and sunshine, you’re bound for endless fun! But Florida doesn’t just have beaches, it also has a wide range of amusement parks. 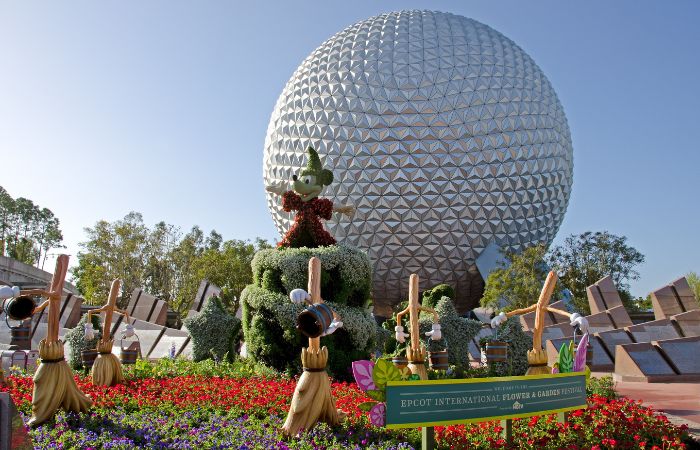 History of Amusement Parks in Florida

Before Disney monopolized the theme park scene in Florida, they had a variety of other wacky amusement parks.

Eventually, the park added water ski performances to the gardens, which became known to be the ‘water ski capital of the world,’ with more than 50 water ski records broken there.

Here are some other notable amusement parks. 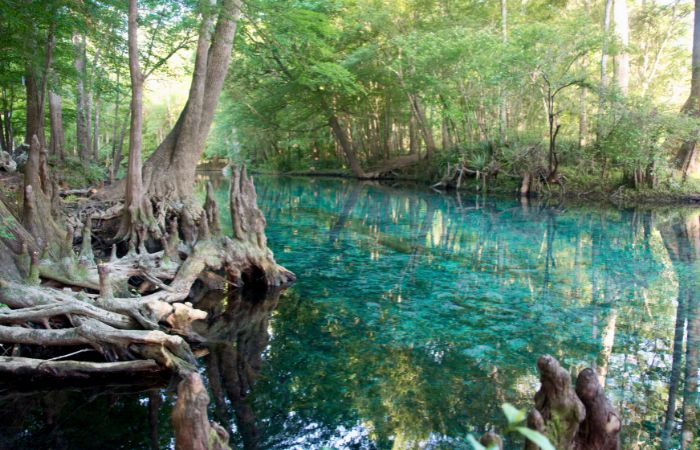 If you’re visiting Florida, you must visit these landmarks: 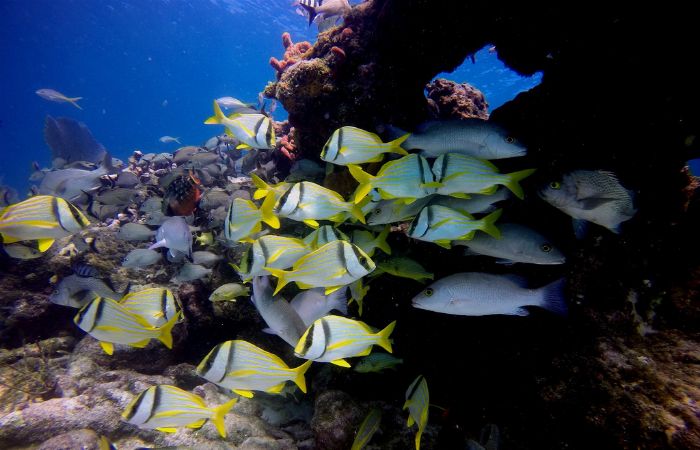 These reefs are known as the ‘rainforests of the forest.’ They provide homes and protection for many different types of fish and underwater plants. The Florida reef has over fifty species of corals containing over 80% of all coral reef species in the Tropical West Atlantic.

With time, the reefs erode due to wave movement to take on specific shapes. The Florida Reefs specifically are made of ‘spur and groove’ formations.

You can perform a wide variety of activities at the reef. It is possible to go diving, boating, or fishing at the reef. You can go scuba diving to look at the reef without being certified, though this is not recommended as it is unsafe.

The Florida Reef is a ticking time bomb. The colorful corals undergo bleaching, losing their colorfulness due to surrounding conditions like rising sea temperatures and ocean water acidification.

Although efforts are being made to preserve the reef through the cultivation and planting of corals, you should still make visiting the reef the first thing on your list when you visit Florida. It might not be there in the future.

Anybody who’s picked up a book knows who Ernest Hemingway is. Awarded the Nobel Prize for Literature in 1954, he has written classics like The Old Man and The Sea.

After the death of the Hemingway’s, their house was converted to a museum available for guests to tour.

One of the more notorious facts about the Hemingway museum is besides seeing where Hemingway wrote his masterpieces, you can also see his cats.

Originally, Hemingway was given a single six-toed cat named Snow White. This cat bred with others, and now the museum houses 60 cats, with about half of them carrying the six-toed trait.

For more information about tours at the museum, you can visit the official website. 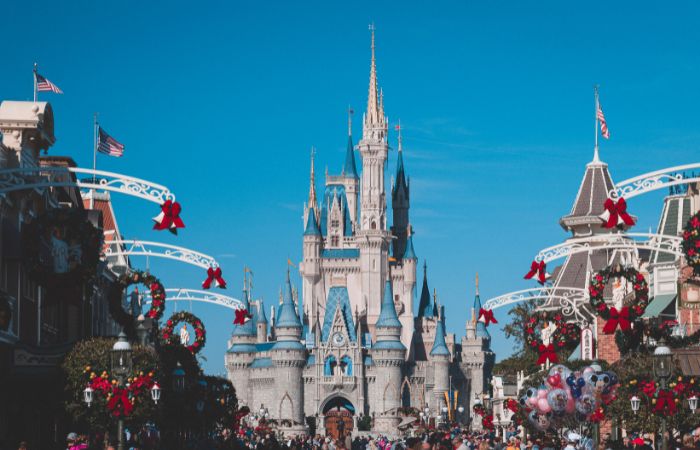 The Disney World Resort is what dreams are made of. It is the theme park to go to.

Consisting of the following six parks to visit, you won’t run out of a shortage of things to do here.

Disney is most renowned for its Magic Kingdom Park. You’ll get the opportunity to speak with your favorite Disney characters, from Maleficent to Gaston.

Other iconic attractions include the themed roller coaster rides, spinning teacups, trains, cars, and slides. You can’t forget the massive Disney castle that some of these attractions are housed in.

Both Epcot and Magic Kingdom contain references to the traditional Disney characters.

However, the main difference between them is that Magic Kingdom offers a full family-friendly experience, while Epcot is more suited to teenagers and adults who love international culture and dining, containing a wide array of restaurants.

For a comprehensive list of differences between the two, you can read this Magic Insiders article.

Disney’s Hollywood Studios are centered around Disney action films, like Star Wars or The Avengers. They have the best thrill rides, so if you’re faint-hearted, you might not want to embark on some of the rides here! 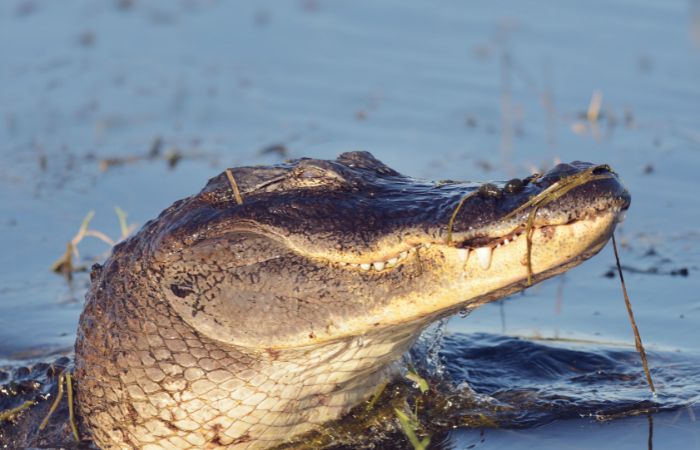 The Animal Kingdom theme park references both nature and animals from various iconic movies like Avatar and The Lion King. Discover the Tree of Life from Avatar, and meet some real-life exotic animals, from elephants to meerkats.

These water parks have all the basic functions of a standard water theme park – water-based rides, a lazy river, large pools, and an overall fun time.

Only one of these water parks is likely to be open at any given time, so you won’t have to choose between the two.

Blizzard Beach is a ski resort-turned water park, complete with snow throughout, making it an instant hit with children. On the other hand, Typhoon Lagoon has the premise of a resort town being destroyed by a typhoon.

Either way, both of these water parks have memorable rides and experiences that will make them unique to visit. 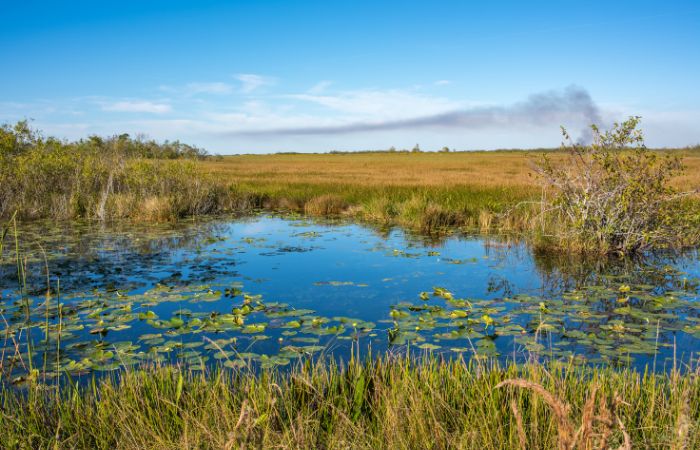 Everglades Park is the largest subtropical wilderness left in the United States. It was authorized to be built in 1934 according to legislation passed by Congress in a bid to save the Everglades.

The Everglades refer to a unique combination of wetlands that house thousands of endangered species like the Florida panther.

You can go canoeing, biking, kayaking, or hiking in the Everglades as you witness a grand marvel of nature. For more information on activities that you can do in Everglades park, click here. 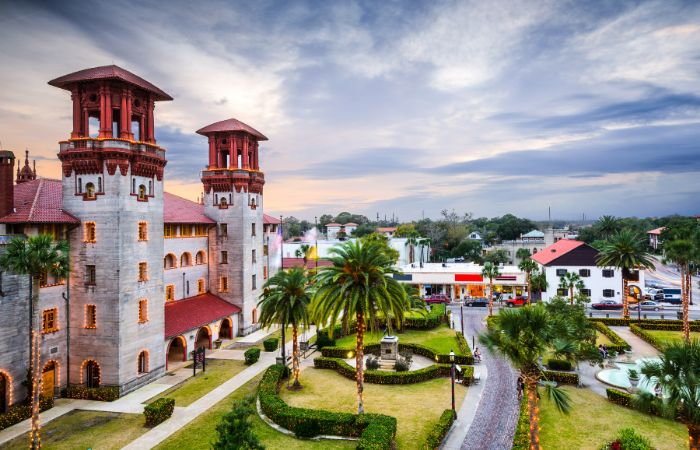 St. Augustine isn’t a landmark as much as an entire city, but it warrants looking into simply because it is the oldest European settlement in the United States.

It was discovered by Pedro Menéndez de Avila in 1565. Walking around Saint Augustine, you’ll find a lot of colonial architecture, the likes of which you would typically see in Spain.

If you’re interested in history and like a dated ambiance, you’ll love St Augustine. Walk through the narrowest streets in the United States and visit landmarks like Castillo de San Marcos and Ponce Leon’s ‘Fountain of Youth.’

For a better idea of what to do in St. Augustine, you can visit the official page. 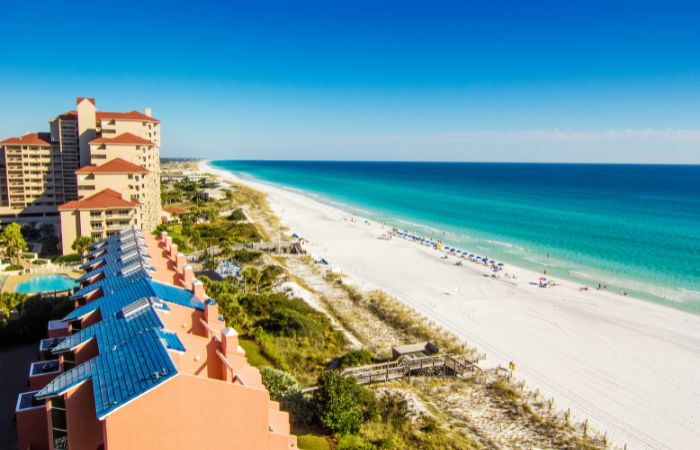 Florida is renowned for its balmy weather and stunning beaches; Panama Beach would be one of the latter.

Featuring 27 miles of white sand and turquoise waters along the Gulf of Mexico, Panama Beach earns its title of being one of the ‘World’s Most Beautiful Beaches.”

You can laze about and tan in the sun, visit the artificial reefs offshore or watch the sunset over the Gulf of Mexico. 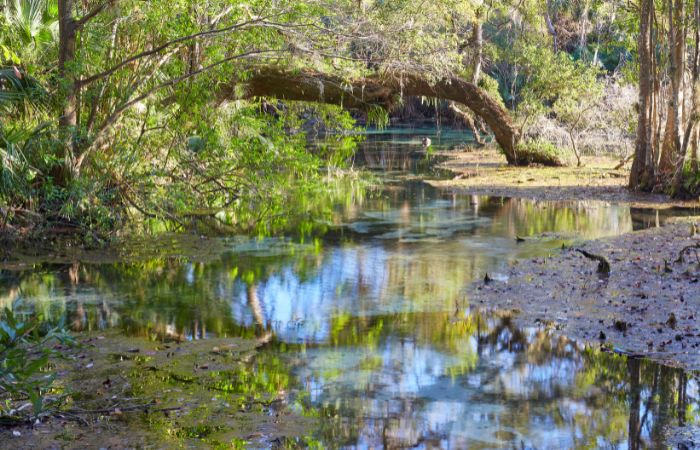 The Rainbow Headsprings flow out into the Rainbow River, which eventually runs into the Withlacoochee River.

This state park is home to three man-made waterfalls formed after the pits of discarded soil dug up in the hunt for phosphate around the rivers.

You can go camping, canoeing, hiking, fishing, or even snorkeling here. The waters of Rainbow Springs have held many treasures, like lost Native American artifacts. If you’re lucky, you might find valuable items! 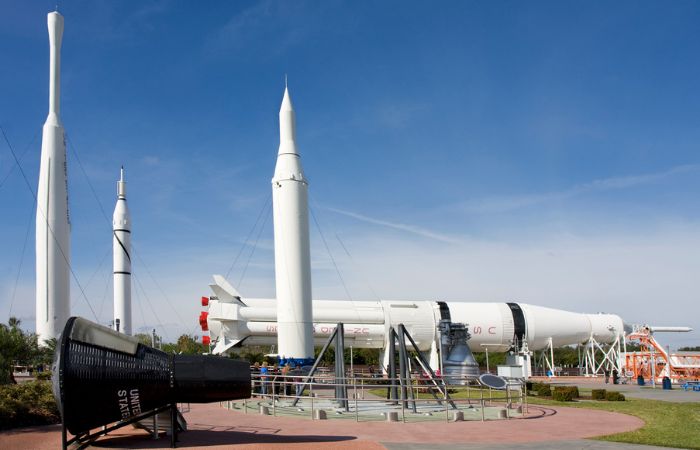 If you’re passionate about space, consider visiting the Kennedy Space Center. It is one of NASA’s ten field centers and has hosted virtually all of the federal government’s manned space flights since the 1960s.

Named after J.F. Kennedy, who swore that they would put a man on the moon, the Kennedy Space Center has various interesting exhibits and even a viewing area for scheduled rocket launches.

You can book a ticket here today. 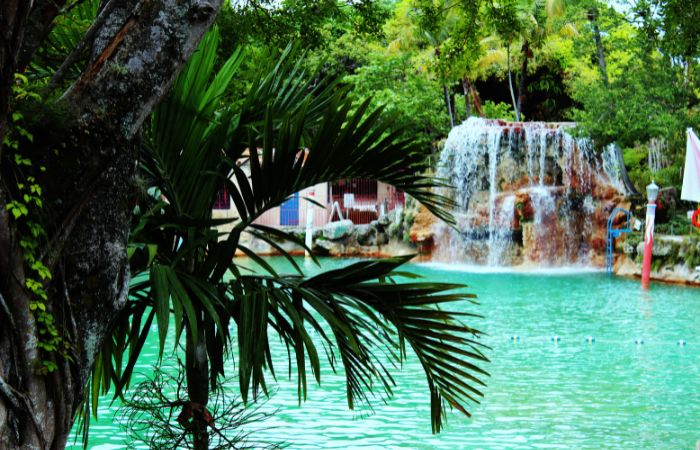 9. Venetian Pool at the Coral Gables

The Venetian Pool at the Coral Gables is unlike any other in the world. It was created in 1923 from a coral rock quarry. However, it’s not any ordinary swimming pool – it also has two waterfalls and cave-like grottos, resulting in its inclusion in the National Register of Historic Places.

Originally opened as a Venetian Casino, this pool was a destination for high society people like movie stars. There were even orchestra concerts held on the emptied pool floor. Today, this history can be seen through paintings and photographs by the pool. 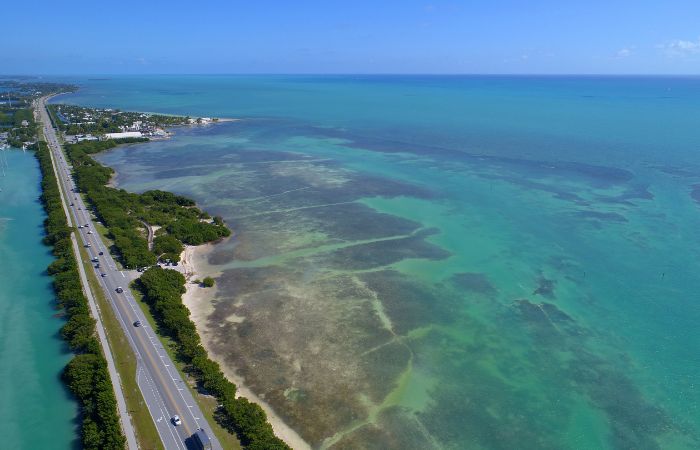 Ultimately, if you’re looking to have a good time on a family vacation, you should go to Florida. Not only does Florida have a wide range of amusement parks for the kids, but it also has fantastic weather and stunning attractions for adults too. It’s the perfect place to find something for everyone!

If you’re planning a trip to Florida be sure to check out this Florida Backroads Travel book.