Top 20 Foods France is Known For & Famous For 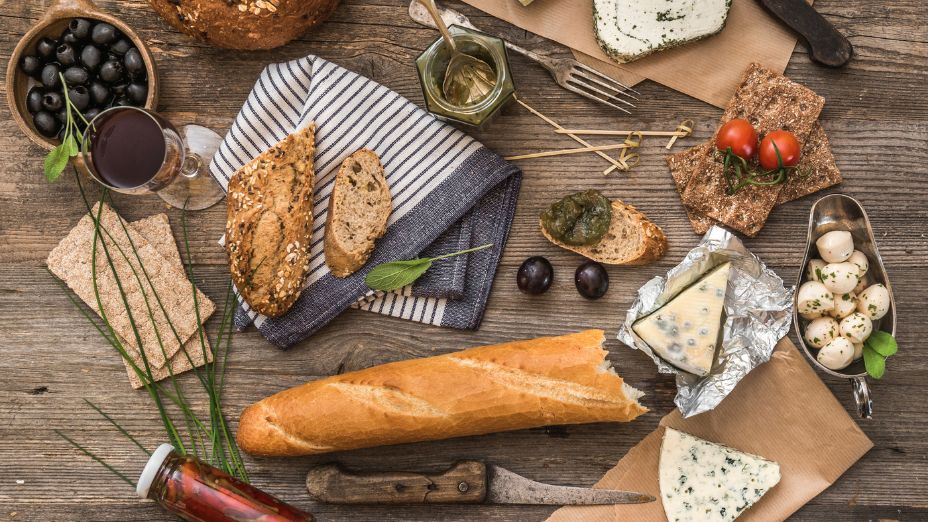 What Food Is France Known for & Famous For?

French food is widely viewed as the pillar of western cuisine. The dishes come together through the use of rich flavors and elegant techniques from which many cultures have drawn inspiration. As a result, French food as an art form, or even as a concept, can often seem intimidating; however, by reading through the following dishes and their premises, you’ll understand that French cuisine is much more than the hundred dollar plates on the menus of 5-star restaurants.

In the following sections, you’ll find twenty of the most famous French dishes that characterize the local cuisine. By reading through the end of this list, you’ll notice a pattern of flavors, techniques, and culinary approaches that will allow you to get a better insight into the core of French cuisine. Therefore, keep reading to learn more about some of the foods France is best known for.

Foods France Is Known for & Famous For

Some of the foods France is best known for (which you’ll learn more about in the following sections) include:

If there’s one dish you’re particularly interested in, you can always skip ahead to the relevant section. Let’s get started!

French onion soup (or soupe à l’ognion, as the locals like to call it) is one of the country’s most distinguished culinary exports due to its unique, rich flavor profile and textural complexity. The dish comprises beef stock and onions and is famously served with melted cheese and croutons on top.

The essence of the soup lies in the homey yet one-of-a-kind flavor that the caramelized onions provide. If you’ve never had the chance to try the dish before, I highly recommend trying it the next chance you get.

As you might already know, the word “escargot” derives from “snail,” which gives you some insight into the premise of the dish. Escargot is one of the most common appetizers in French cuisine; however, the dish is actually of Spanish origins.

Having said that, the French have really made escargot their own throughout the years. The dish consists of snails cooked in garlic, wine, and butter inside their shells, providing a fascinating flavor that’s characterized by its earthiness, which complements the rich butter and garlic flavor beautifully.

If you’re a fan of chicken-based recipes, this is your dish. Having had the chance to try coq au vin multiple times, I can confidently say that the quintessential French technique really shines through in this conceptually simple dish.

Coq au vin consists of chicken braised in wine, onions, garlic, and mushrooms. Even though “coq” directly translates to rooster, most renditions use chicken.

The dish was popularized in the US by the one and only Julia Child, whose coq au vin has earned a deserving spot in the history books of western cuisine.

Cassoulet is one of those dishes you’ll see many renditions of; however, its premise remains the same: the dish can be best described as a French casserole that generally features beans along with several types of meats. In most cases, a cassoulet is comprised of pork and various types of sausages; however, don’t be surprised if you find a few less common ingredients mentioned in a recipe here and there.

The ingredients are then braised over low heat until even the toughest piece of meat starts to disintegrate with little to no pressure.

What’s impressive with this dish is that although it comprises so many ingredients, each of them plays such a crucial part in the final taste and aroma that you’d be able to notice if even one of them were missing.

No “Most Famous French Foods” list would be complete without a scrumptious, decadent, chocolatey dessert. Religieuse au Chocolat is everything you want it to be and more. The dish consists of two choux pastry cases stacked vertically, with the bottom one being slightly larger.

Each choux case is filled with crème pâtissière (generally chocolate-flavored) and covered with chocolate ganache. The two cases are joined and decorated using buttercream frosting. Religieuse au Chocolat boasts a 5-century long history, throughout which it has left anyone that’s tried it amazed by its delicate yet vivid flavors.

Baugette au formage is the quintessential French food. It’s arguably the simplest dish on this list; however, it’s probably the first one that many of you might think of when it comes to French food.

Even today, baguettes are still the most popular type of bread in the country, with Statista reporting that 95% of the population has consumed a baguette within the last year. Even though the bread itself can be served with various additions and toppings, in my opinion, nothing beats the combo of a fresh Baguette with some fragrant French cheese like Camembert, Chaource, or Brie.

If you’re looking to experience the joys and pleasures of French cuisine in the comfort of your own home, Baguette au Fromage is an excellent (and easy) dish to try.

Bouillabaisse is a spicy, rich stew or soup made that comprises various types of fish. The dish was originally invented in Provence, a coastal region of France. As its popularity increased across the country, the meal took on many forms and flavors through its several variations.

Therefore, depending on the specific location where you try your bouillabaisse, the flavor and intensity will vary slightly. However, the premise remains the same: bouillabaisse is a hearty, warm, rich soup or stew that boasts a complex yet highly satisfying flavor.

Even though now you might find the soup served in 5-star restaurants all across France, the dish is of very humble origins. It was first invented by a fisherman looking to make use of his fish scraps that no one would want to buy. However, as cooks started using better quality fish and ingredients, bouillabaisse quickly turned into a delicacy.

You can’t really get more classic French than bœuf bourguignon. The dish originates in Burgundy, a region located in eastern France (the same region that gave us coq au vin). Bœuf bourguignon can only be described as a stew that features beef braised in red wine, pearl onions, mushrooms, beef broth, and abundant seasoning.

Bœuf bourguignon is also a dish of humble origins, as, at the time of its creation, it was generally considered peasant food. However, the dish has come a long way since then and is now one of the most sought-after delicacies all across France.

If you’re a home baker (or a dessert lover in general), you know that no dessert is as quintessentially French as the soufflé. The dish follows a familiar theme: its ingredients are few, simple, and rich; however, its techniques can be a bit difficult to master.

The word “soufflé” means blown, which represents the process that happens when the beaten eggs rise and create that signature airy texture in the oven. Chocolate soufflé is one of the most temperamental desserts you’ll come across, as a difference of mere seconds can make or break the end result.

When made correctly, a soufflé should feel light as air yet satisfying—a perfect end to a heavily seasoned and rich French meal.

Flamiche is essentially a leek pie originating from the region of Picardy. The dish closely resembles the famous quiche Lorraine, and it features a flaky crust and a filling of butter, leeks, and crème fraîche. Later variations might also include additional seasonal vegetables, nutmeg, and cheese.

If you’re looking for a mouth-watering duck dish, you’re in luck! Confit de canard is a dish traditionally consisting of slow-cooked duck meat (as the name suggests) that’s been marinated in garlic, salt, and thyme.

Modern variations can also include goose or pork; however, always opt for the duck if you’re looking for an authentic experience. The meat is cooked for more than 36 hours, after which—as you might’ve guessed—it essentially melts in your mouth. Therefore, if you’re ever in France, confit de canard is a dish you won’t want to miss out on.

We’ve had our fair share of rich, intense dishes thus far, so I think it’s time to look into a fresh, crispy salad for a change. Salade Niçoise is a dish that originates from Nice (as the name suggests), a city located in the southeast of the country.

The dish comprises colorful vegetables, fresh fish, and hard-boiled eggs. Some of the most common ingredients include onions, tomatoes, black olives, and anchovies or tuna.

Thanks to the hit 2007 animated movie sharing the same title, it’s safe to assume that you’ve already heard of ratatouille. If you watched the movie through the end, you know that the dish comes from humble origins.

In fact, the dish is even simpler in reality, as it’s essentially a vegetable stew consisting of eggplant, zucchini, bell peppers, onions, tomatoes, olive oil, and local aromatic plants.

If our dessert lovers are tired of chocolate-based dishes, I’m happy to tell you about Tarte Tatin. This elegant predecessor of our classic apple pie features a golden crust pastry filled with apple slices marinated in sugar, butter, and cinnamon.

Tarte Tatin then gets baked until set and syrupy, after which it is served turned upside down on a serving platter.

I couldn’t finish this list without including some traditional French beverages (I know what you’re thinking, and don’t worry—we’re getting into wine in a moment). Absinthe, however, is one of the most distinctive spirits in the world. It is characterized by its vibrant green color and its alleged hallucinatory effects, due to which many referred to the drink as “The Green Fairy.” However, these claims have now been debunked (well, kind of).

Either way, absinthe is a quintessential French spirit you won’t want to miss out on if you ever get the chance.

Wine is arguably one of France’s most famous culinary exports. No dish or meal is complete without a glass of light, aromatic red or white wine. Not only is French wine a delicacy tourists fly thousands of miles to try, but locals can’t seem to get enough of it either. French locals consume millions of liters of wine in a year, which has put them among the highest wine-consuming nationalities in the world.

Even though foie gras is a controversial dish due to its ethical concerns, it’s impossible to make a “French foods” list without at least mentioning it. The dish is essentially a soft pâté made of duck liver. Foie gras has traditionally been served along with beef, fig jam, or black truffle.

Crepes are one of the most versatile dishes in French cuisine. They’re usually served as a sweet breakfast treat; however, they can be topped with plenty of savory add-ons as well. The only component that must be included for a dish to be classified as a crepe is the soft, thin pancake base.

I’m finishing off this list with one of the most elegant, texturally complex, and traditional desserts of French cuisine. Crème brûlée consists of a custard base made with sugar, egg yolks, vanilla, and cream, topped with a layer of hardened sugar. That first crack of the sugary topping followed by the smooth, creamy, rich custard is something you should experience at least once in your lifetime.

France is a culinary haven, boasting a wide range of scrumptious, rich, one-of-a-kind dishes from which the rest of the world has always drawn inspiration. The premise of a traditional French dish is simple—you’re getting humble but premium-quality ingredients cooked with hard-to-master techniques.