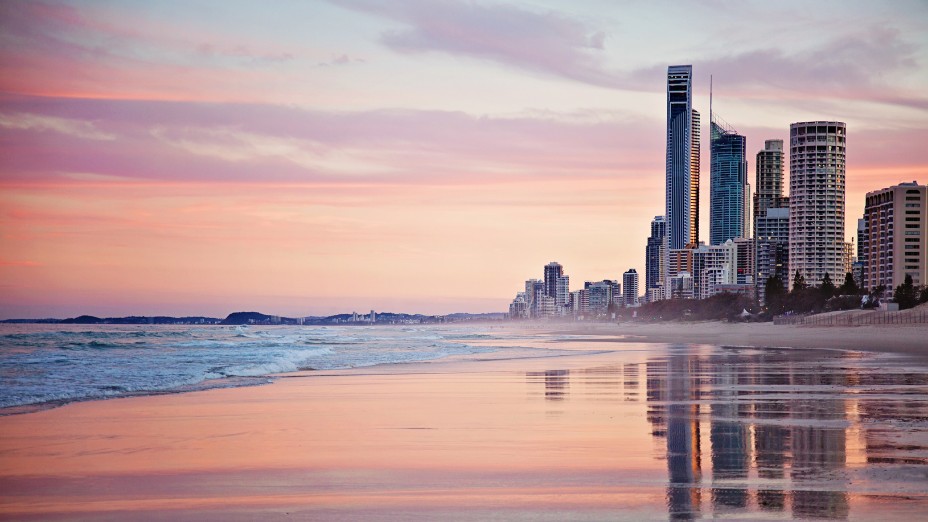 What Is Gold Coast, Australia Known For

Gold Coast is a waterfront city located in Queensland, Australia. Formerly known as the South Coast, its name took hold after the real estate boom of the 1950s.

Gold Coast is known for its lovely weather, gorgeous beaches, and national parks.

A prime tourist destination, it’s heralded as Australia’s theme park capital. It’s equally famed for its whale watching, golfing, and supercar racing events and is home to the majority of Queensland’s film productions.

Let’s take a deeper look at these things that make the Gold Coast so famous. 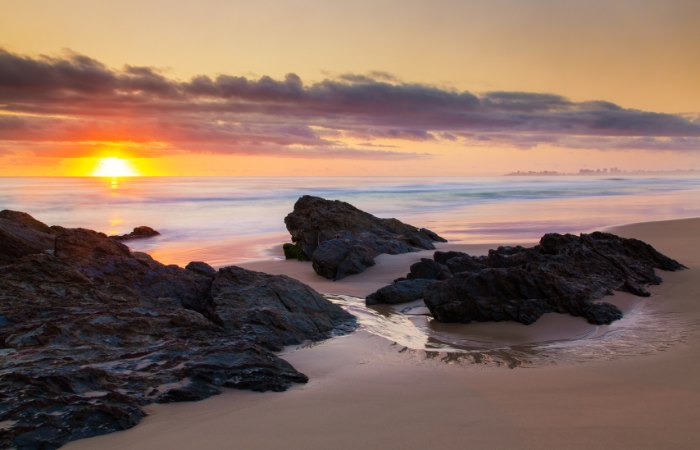 While most of Australia boasts lovely weather, the Gold Coast’s climate is especially pleasant. The summers, which run from December to February, are often hot and humid. 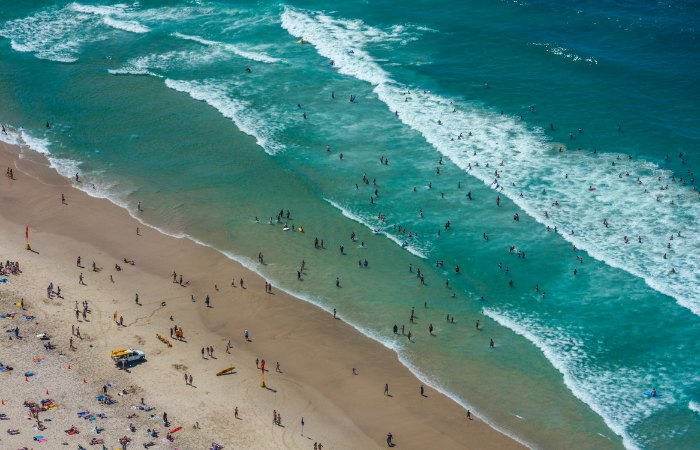 With its lovely weather and beautiful beaches, it’s no surprise that Gold Coast is one of the top tourist destinations in Australia.

Before the COVID-19 pandemic, the city hosted an average of 10 million visitors a year. These tourists, in turn, generated a whopping $4.4 billion annual revenue.

Tourism remains the city’s most significant industry, providing one out of four jobs in the city.

Gold Coast is more than just a holiday destination; it’s known for it’s sprawling residential metropolitan as well. In fact, it’s Australia’s sixth-largest city – being home to 635,000+ people (and counting.)

The Gold Coast is one of the country’s fastest-growing areas, thanks to its 2.38% increase in population growth. It’s a far cry from the runner-up Brisbane, which only grew by 1.87%. 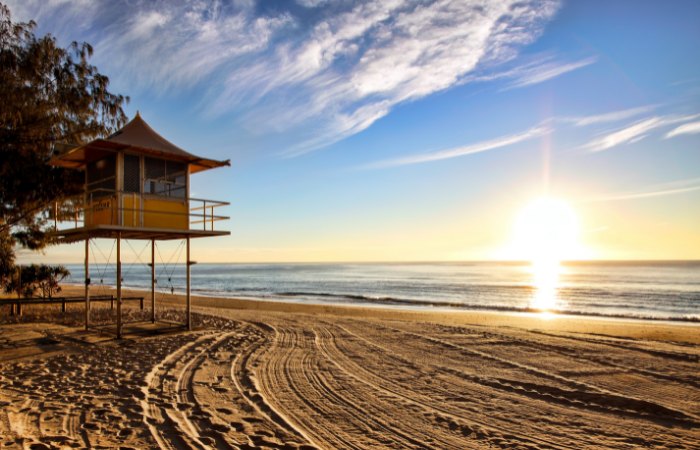 The Gold Coast covers 70 kilometers or 44 miles of prime coastline. As such, it’s a mecca for those who love the sun, sand, and surf.

Given that there are so many beaches to choose from, it’s best to set your sights first on these seven popular beaches: 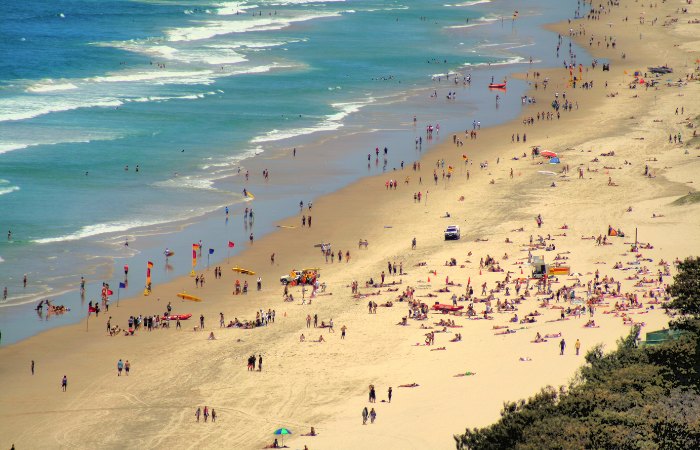 The name speaks for itself.

One of the Gold Coast’s most famous beaches, Surfers’ Paradise boasts of a 2-kilometer/1.25-mile shoreline.

Surfing isn’t the only thing you can do here, though. The coastline has restaurants, bars, and markets if you’re in the mood for some eating, drinking, or shopping.

With its crystal clear waters, Kirra Beach is a top choice amongst sunbathers, swimmers, and paddle boarders alike.

It’s not as popular as Surfers’ Paradise, which can be kind of hectic during the summer. As such, Kirra Beach is ideal for people who want to sit back, relax, and revel in the views.

Tallebudgera is a white-sand beach that leads out of the Pacific Ocean. Here, you can enjoy various activities – from swimming and kayaking – to some leisurely fishing.

Tallebudgera Creek is an excellent place to camp out with family as well. In fact, many Gold Coast residents do so as part of their yearly traditions.

Burleigh Heads is a favorite amongst many swimmers – and wave riders too. It offers sheltered waters for younger paddlers – and big waves for the more seasoned surfers.

Tip: If you want to learn from a pro, you can book a private class with surfer Michael Berry on this beach!

If you’re new to the world of surfing, then you should try out Rainbow Bay first. Its shorelines are dotted with surf clubs, which means there’s no scarcity in surfing lessons here.

Rainbow Bay is also a sheltered area, making it a perfect swimming spot if you’re not mood to surf.

Known to the locals as ‘the Alley,’ Currumbin Beach is famous for its consistent waves.

Like Rainbow Bay, Currumbin is sheltered from onshore winds – thus making it a great practice spot for newbies.

It’s operated by lifeguards daily from 8 am to 5 pm, making it one of the safer options for swimmers.

Located north of Point Dagger, Snapper is the first part of the Gold Coast Superbank. This artificial surf break provides some of the longest, hollowest waves.

Meter maids usually issue tickets to those who have parking violations. However, at Surfers Paradise, they do the opposite: putting money in the meters.

And yes, they do it in their skimpy gold bikinis and emblazoned sashes.

Founded by Bernie Elsey in 1965, the meter maids became controversial because of the legalities of feeding parking meters. However, the city council quickly dismissed such offenses, for the meter maids helped boost tourism.

Despite the multiple issues throughout the years, these meter maids continue to help Golf Coast drivers avoid fines. 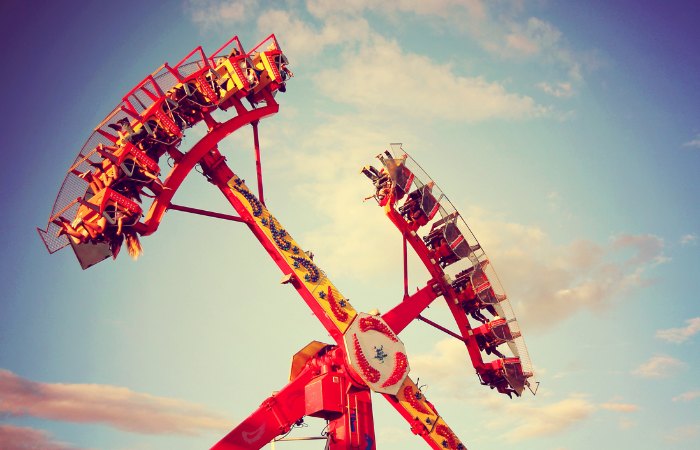 The Gold Coast is the “Theme park capital of Australia.” After all, it has five attractions that offer anything from thrill rides to animal shows.

Kids – and kids at heart – are sure to enjoy these attractions:

You don’t need to go to the US to enjoy movie theme parks. You’ll enjoy the same experience (if not better) at the Australian Warner Bros. Movie World.

Here, you can revel in the Superman Escape – or test your wits on the thrilling Green Lantern Roller Coaster.

Not in the mood to ride? Make sure to roam around so you can meet your favorite characters, such as Bugs Bunny and Daffy Duck.

The 20-acre (8.1 hec) resort is home to slides, speed coasters, and wave pools. There are multiple wave pools for the entire family – from tiny tots to grandparents too!

DreamPark is the country’s largest theme park. It offers more than just rides, though – it’s a zoo that features native animals, as well.

It’s also home to the Flowrider, a water park where you can surf, skateboard, or bodyboard.

If you’re looking to engage in more water activities, you can always visit the park next door: White Water World.

One of Gold Coast’s hit tourist attractions is just a stone’s throw away from DreamPark: White Water World. It’s notorious for its four top water slides, as well as other fun adventure rides.

In case you’re in no mood to take the Pipeline Plunge or the Wedgie, you can sit back and relax in one of the resort’s private cabanas. 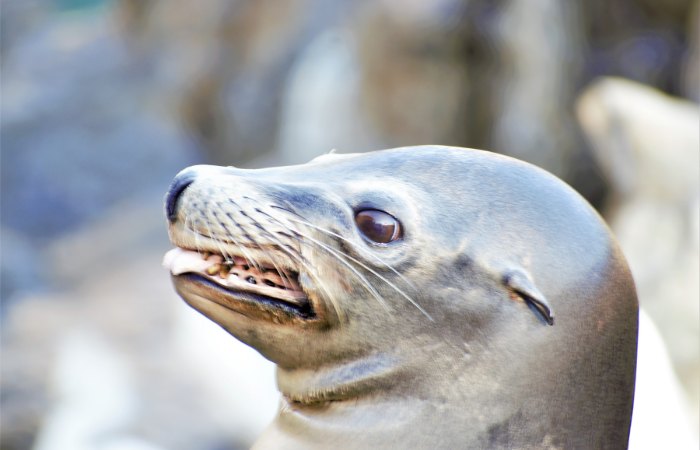 Want to learn – and have fun – all at the same time? Then SeaWorld is the theme park for you. While it’s famous for its water attractions, it focuses more on its educational shows about marine animals.

A day isn’t enough for this attraction, which is why you should rent a room in its hotel. It offers a one-of-a-kind experience, being the only theme park hotel in Australia. 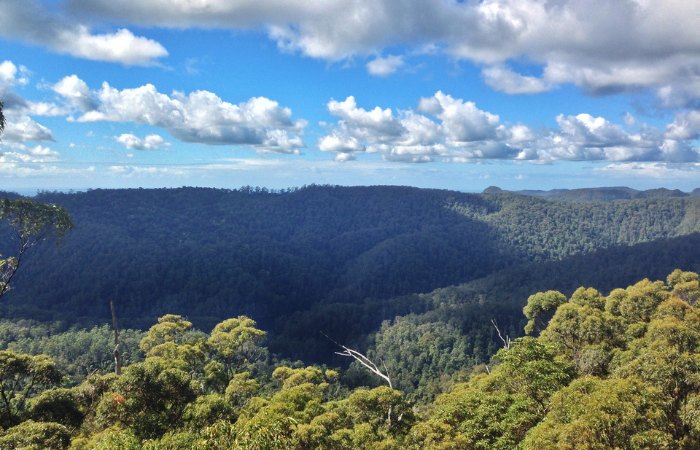 The Gold Coast may be known as Australia’s theme park capital, but it’s also a hotspot for national parks. Here, you’ll find a total of six forested expanses. 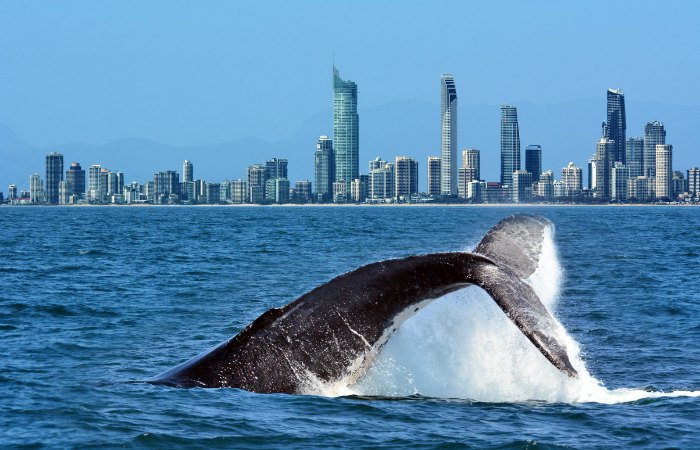 Speaking of whales, watching them is an activity that makes the Gold Coast stand out. The city’s ready access to the Pacific Ocean allows for close views, after all.

Most tours depart from Surfers Paradise. While whale sightings are guaranteed most of the time, companies do offer a free return cruise – in case you don’t see one. 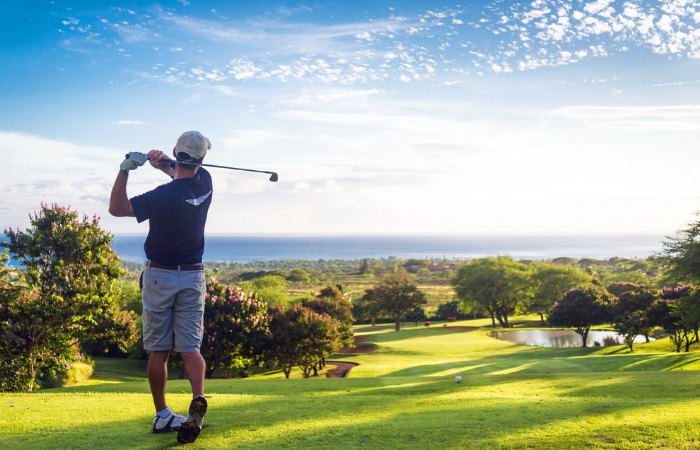 With 30 golf courses set within a 20-kilometer (12.4-mile) radius – most enthusiasts are now calling Gold Coast the ’Golf Coast.’

Many are in the Top 100 List, one of which is the 6681-meter (4.150-mile) Sanctuary Cove – Pines. Exclusive to Country Club and Hyatt Regency guests, it’s noted as one of the country’s most challenging greens.

There’s also Sanctuary Cove – Palms, which is surrounded by cabbage palms. It’s a par 71 – with a rating of 70.

Also included in the list is the Royal Pines, which is located near the Nerang River. Not only is it suitable for casual playing, but it’s also the spot for prestigious golfing tournaments.

Although Sydney and Melbourne are Australia’s usual film production spots, the Gold Coast is on its way to dethroning them. Lately, it has become a significant film shooting hub. To date, three-quarters of films made in Queensland have been shot in the city.

The Gold Coast – and the massive Village Roadshows studio – have been the backdrop of many familiar films. Some blockbusters in this list include the Pirates of the Caribbean: Dead Man Tell No Tales, Kong: Skull Island, and Godzilla vs. Kong, to name a few. 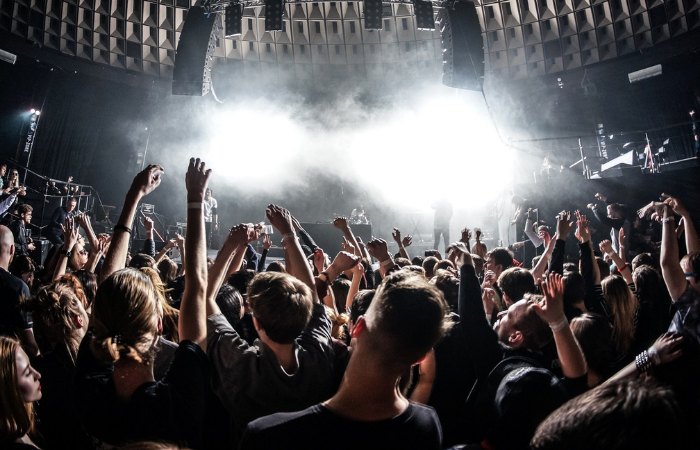 When it comes to partying in Australia, the Gold Coast is one of the hands-down favorites. It’s ranked fourth, after Melbourne, Sydney, and Byron Bay.

In fact, it’s swarming with party-hardy students every November.

The Surfers Paradise area, being lined with countless bars, is undoubtedly Gold Coast’s party central. If you’re thinking of going in – no holds barred – then sign up for the infamous ‘hangover crawl’ or ‘wicked club crawl.’ 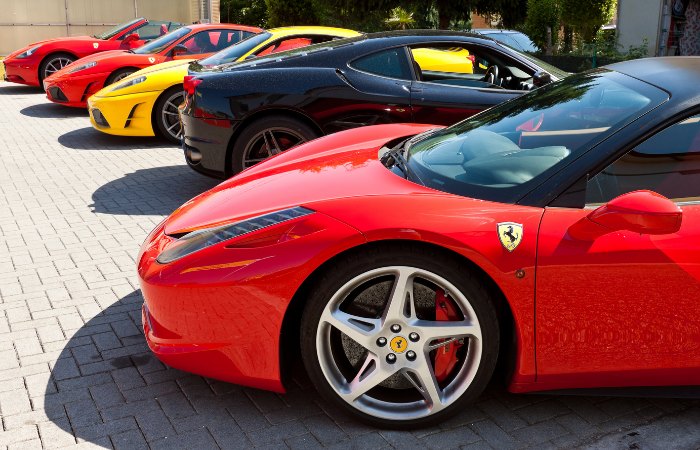 The Gold Coast isn’t just about the sun and sand – it plays home to supercar racing as well. While V8 supercars have been racing in the city since 1994, the town only had its own match in 2010.

The event, known as the Gold Coast 500, includes 2×85 laps at the Surfers Paradise Street Circuit. They make for a distance of 250 kilometers (155 miles) each. 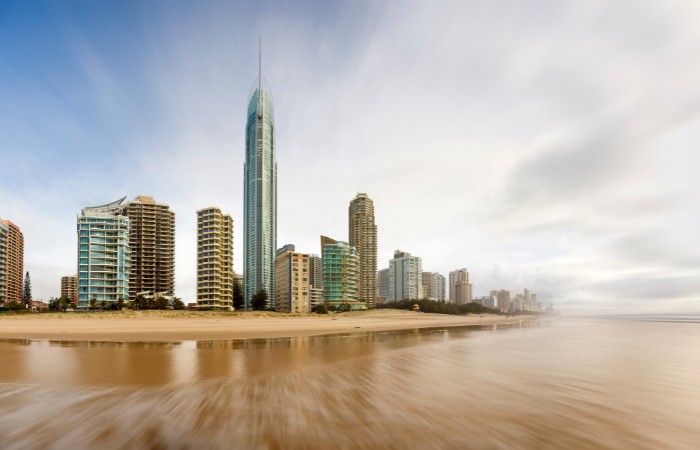 Q1: the Tallest Building in Australia

Q1 was the tallest residential building in the world until 2011, when the 21st Century Tower in Dubai was built.

As the tallest skyscraper in the country, its observation deck offers the best sights. Here, you can enjoy an unobstructed view of Brisbane, the Gold Coast hinterland, Byron Bay, and the Pacific Ocean. 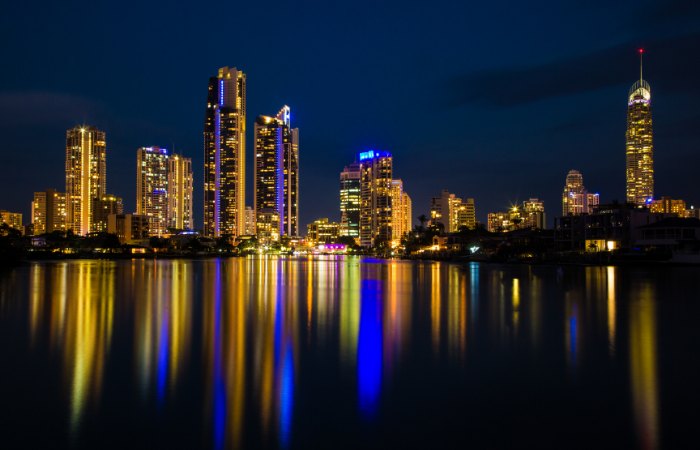 With its notable features,  the Gold Coast makes for a memorable experience ‘down under.’