Top 21 Things Little Rock is Known For & Famous For 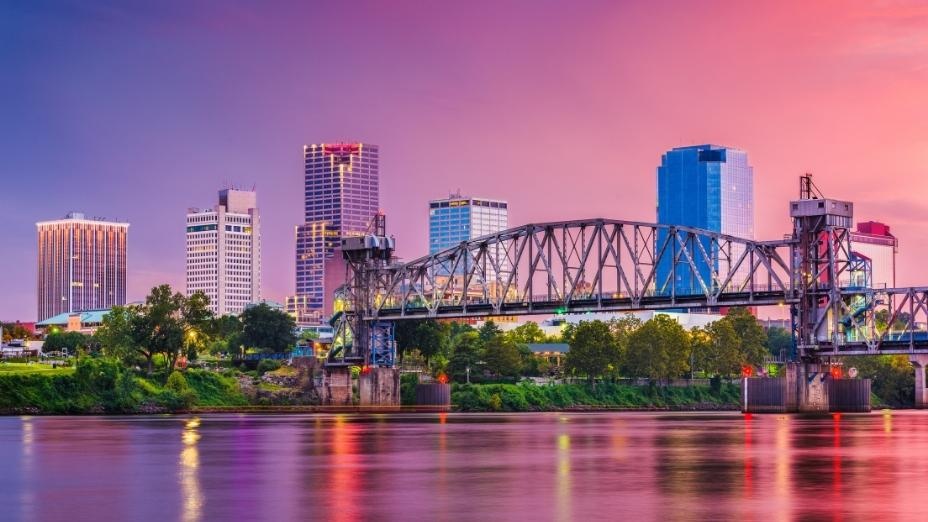 What Little Rock, Arkansas is Known For & Famous For

Little Rock is known for many things. As we will discover through this article, this town is full of interesting facts, and some are pretty well known, while others will surely surprise you. What is Little Rock, Arkansas known for?

Little Rock, Arkansas is known for its unique architecture, famous sports stars, and historical landmarks. The state capitol was used as a stand-in for several Hollywood films, due to its resemblance to the US capitol. The city claims to be the origin of the chili-cheese dog, but that is disputed.

Little Rock is a unique city and one that many people overlook for vacations. To learn more about Little Rock, Arkansas, and where you might want to visit within the city during your vacation, keep reading.

Little Rock has plenty of unique architecture to visit while you’re in the city. For example, the old capitol building is now a museum and on the national landmark registry.

Let’s take a look at some of the fun places to visit or to learn about. 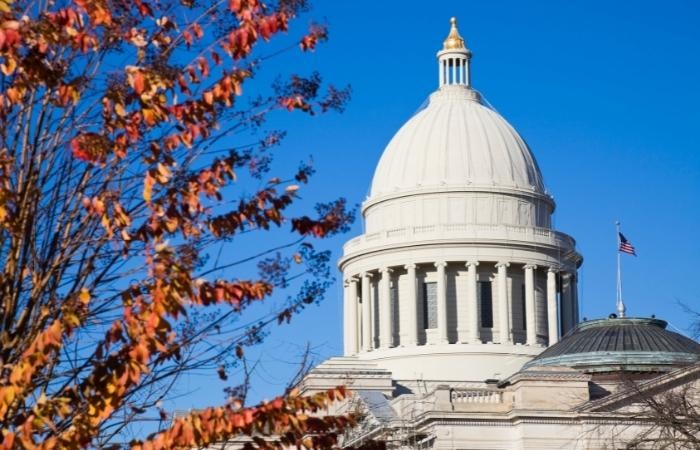 Located in Little Rock and once being Arkansas’ first Capitol Building, The Old State House Museum is currently the National Historic Landmark and the Arkansas History Museum. The house was built between the years 1833 and 1842 commissioned by Governor John Pope.

The current Little Rock Arkansas State Capitol was finished in 1915. Interestingly, due to its resemblance with the United States Capitol, it has been used in several Hollywood films as a stand-in.

The American Institute of Architects named the City Central High School the most beautiful high school in the United States.

The Little Rock Senior High School was built in 1927 and renamed Little Rock Central High School in 1953. It was designed according to the Gothic Revival style at the cost of $ 1.5 million.

The school was acclaimed as the largest, most beautiful, and most expensive in the nation.

There is only one face-to-face purse museum in all of the United States, and it happens to be in Little Rock. It is called the ESSE Purse Museum. A rare nugget of information about it is that it portrays American women’s different purses and contents over the years. 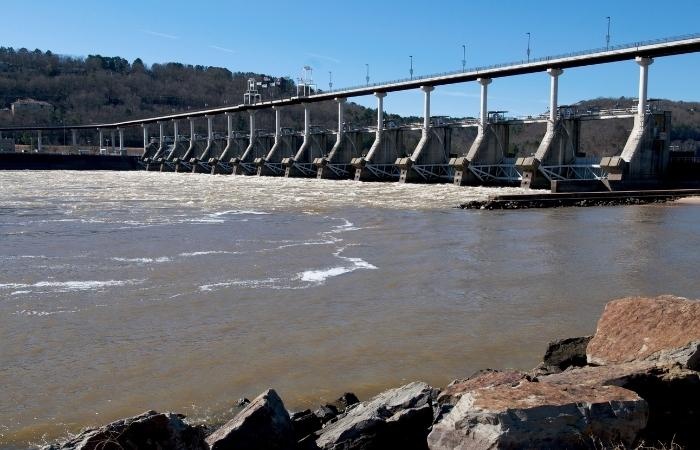 There’s a bridge called “Big Dam” with the record as the longest U.S. bridge just for cyclists and pedestrians. With a length of 8 miles (12.9 km), it connects the city of Little Rock with the nearby town of North Little Rock. 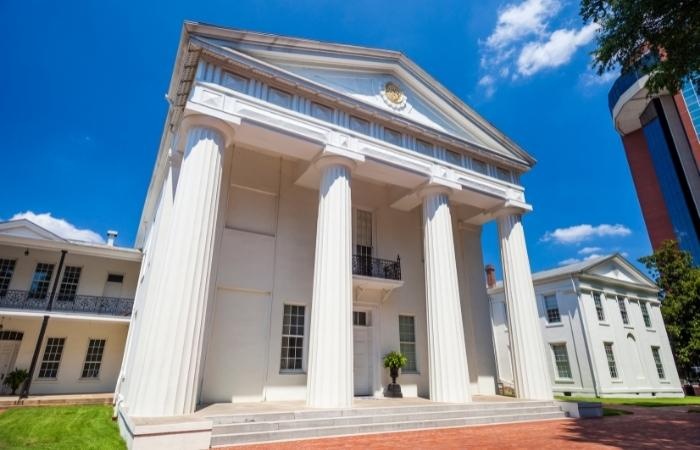 Between 1833 and 1842, Little Rock’s Old State House Museum, which is an old red brick construction, was built. Of all that still exists, this state capitol building is the most ancient on the Occidental bank of the Mississippi River.

Brown vs. Board of Education

There was a case known as the “Brown vs. Board of Education” which was of paramount significance on May 17th, 1954. To summarize the point, the court considered that segregation of racial nature in schools was unconstitutional.

Tempers flared as a party of African-American students known as “The Little Rock Nine” found their way into the Little Rock Central Highschool. Mainly because they were escorted by no other than the Arkansas National Guard, as instructed by the President of the United States, Dwight D. Eisenhower.

Little Rock is also known for how animals are treated here. An example of this is the city zoo. The city started a zoo with only two animals.

Let’s look at these oddities.

While there are many Billy Bass adoption centers in the whole world, the one that claims to be the first is located in Little Rock. Billy Bass used to be a novelty in the early 2000s. It was basically an electronic bass figure stuck to a wooden board that could actually sing. 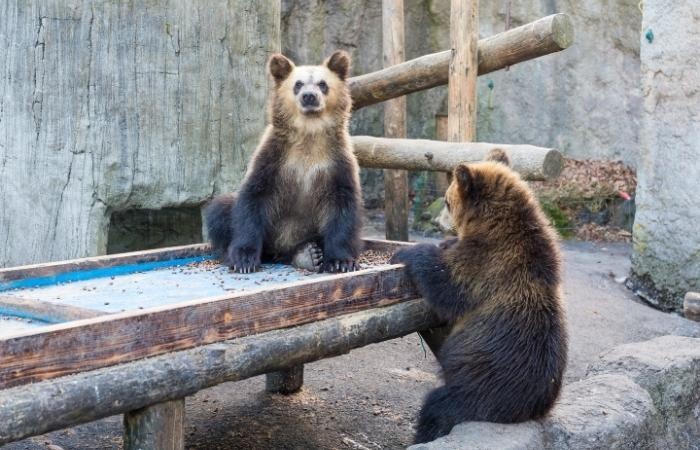 When the city zoo opened in 1926, the only two animals were an abandoned timber wolf and a circus-trained bear.  Today, the zoo boasts over 700 animals that represent over 200 species. They also host many community events that attract thousands of visitors every month. 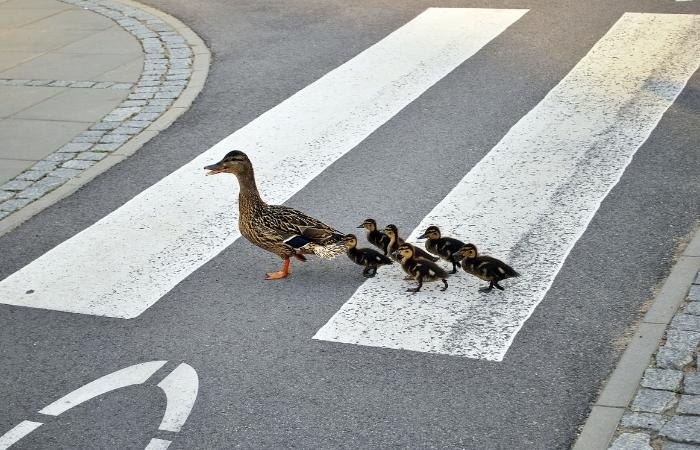 In downtown Little Rock, we can find The Marriott (formerly The Peabody Hotel). It had an amusing tradition for 11 years known as the “Daily Duck March” that consisted of a parade where a group of mallards walked through the hotel lobby and into a fountain at precisely 11 am.

Every day at 5 pm sharp, a man wearing a red jacket, known as the “Duckmaster,” would then guide them into the elevator to be sent to their penthouse on the hotel roof.

There is a rather strange story about this town. During the 19th century and before, religious beliefs dictated that the human body had to remain intact after death before ascending to the next life.

Therefore, doctors in Arkansas were denied permission to carry out dissections on human corpses.

This was until doctors Drs. Richard S. Vickery and James H. Lenow performed a dissection on a human corpse in 1874, putting an end to this assumption. These events took place at MacArthur Park on Little Rock’s McMath Avenue.

In 1927 a monument was built on the site by the Arkansas Medical Society to honor such a historic moment. 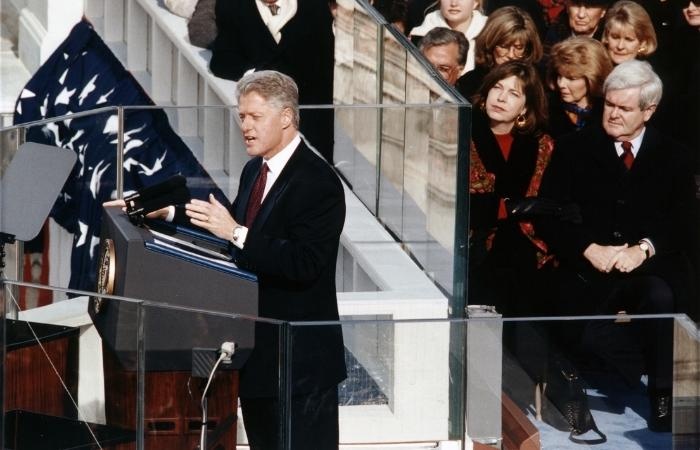 The Clintons’ Ties To the City

Contrary to popular belief, former President Bill Clinton was not born in Little Rock, nor his wife, Hillary.

Mr. Clinton was born in Hope, Arkansas, and Hillary in Chicago. However, their daughter Chelsea was indeed born in Little Rock. “Socks,” the famous stray cat adopted by the Clintons during their presidential years, was also born there.

In 1977 Stevie Wonder released a song (that also gave its name to the album) called “I was made to love her.” The song’s opening line is “I was born in Little Rock…” and reached the Billboard Pop Singles’ second spot in July 1967.

Despite the song’s opening line, he was not born there but in Saginaw, Michigan.

The state of Arkansas has 8 commercial airports. The largest one, located in Little Rock, is the Bill and Hillary Clinton International Airport. It ranks number 79 as the most extensive commercial airport in America, with over 2.5 million passengers using it each year.

Designing Women was a highly successful sitcom that aired between 1986 and 1993. The show was about a man and four women who worked together at an interior design firm during the ’80s.

Even though the series took place in Atlanta, Georgia, an image can be seen at the opening credits showing an impressive manner. It’s no other than Little Rock, Arkansas’ own Villa Marre Residence.

Located at 1321 Scott Street, the house was built in 1881 by Angelo and Jennie Marre.

Many consider E. Lynn Harris (born Everette Lynn Jeter) the most prolific and successful author of books depicting gay and African-American men. Originally from Flint, Michigan, he moved to Little Rock at the early age of 3.

During his writing career, he had 10 consecutive books on The New York Times Best Seller list.

The actor Josh Lucas, known for starring in movies like American Psycho, A Beautiful Mind, Sweet Home Alabama, Poseidon, and Hulk (among many others), was born in Little Rock on June 20th, 1971.

A lady named Adolphine Fletcher Terry was born in Little Rock on November 3rd, 1882. As a social and political activist from Arkansas, she had the opportunity to make a difference in sensitive areas like women’s rights, housing, racial equality, and social justice within the community of Little Rock.

One honorable citizen born in Little Rock was Douglas McArthur.

McArthur (1880-1964) was a 5 star general of the United States Army who served in many campaigns over his long and fruitful military career. He was awarded the Medal Of Honor for his service in the Philippines during the 1930s.

His father (Arthur McArthur Jr.) also received this award, making them the first father and son to receive this medal.

Those who were blessed with growing up in the 80s will definitely remember The Sharper Image. It’s an American brand that hosts various electronic gadgets, air purifiers, and gifts that operated from 1977 until 2008. Then it was relaunched in 2010 and continues to work to this day.

It was founded by Richard Thalheimer.

Thalheimer was born and raised in Little Rock. He graduated from Hall High School before moving to New Haven, Connecticut, to study at Yale University. 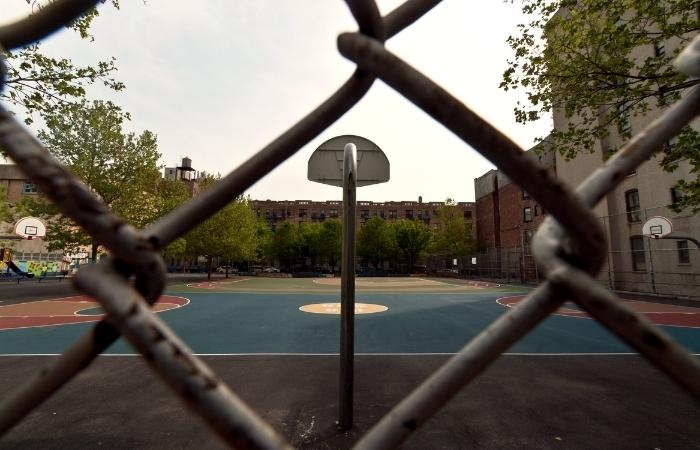 The Harlem Globetrotters (originated in South Chicago in 1926) is a basketball exhibition team that combines comedy, athleticism, and theater. One of their most memorable and famous members was Hubert “Geese” Aussie, who joined the Globetrotting ranks in 1961 and played for them for 24 years.

When Hubert finished his high school studies, he was offered more than 200 athletic scholarships from the most important colleges. Eventually, he chose to attend Philander Smith College in Little Rock.

Brooks Robinson is a former pro baseball player who was born in 1937 in Little Rock. He played third base for the Baltimore Orioles for 23 seasons between 1955 and 1977, which was the longest baseball career with a single team.

In 2011, Little Rock ranked as the second cleanest city among 80 large cities in the U.S. The criteria used were the air quality and the amount of toxic waste produced and discarded by local companies.

The state of Arkansas comprises 75 counties, all of which have at least one newspaper. Little Rock is located in the county of Pulaski and it has 6 newspapers. In 1885, with a city population estimated at 25,000 people, a newspaper offered to give a free plow as a gift to those who purchased a prepaid subscription of $12. 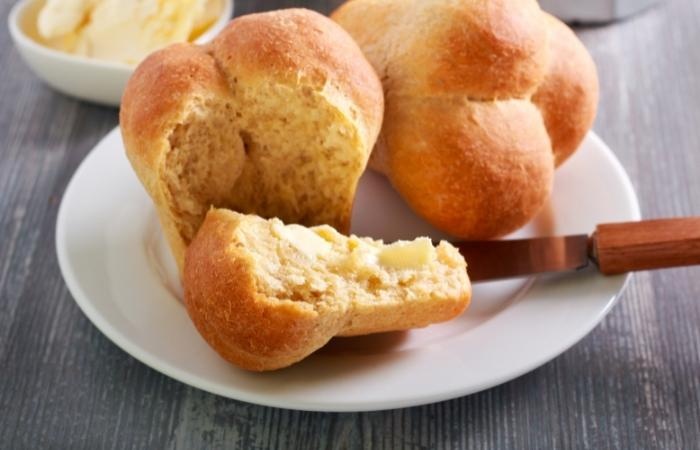 One of Thanksgiving dinner’s popular items, the brown-and-serve rolls, was invented in Little Rock, Arkansas, at Meyer’s Bakery in the 1930s.

The city claims the invention of the chili cheese dog. A quick explanation to those who don’t know or haven’t had the pleasure to taste one. The cheese dog is a hot dog that has either been covered with melted cheese or is stuffed with it.

Little Rock locals say that it was invented there at the Finkbeiner Meat Packing Co. in 1956. 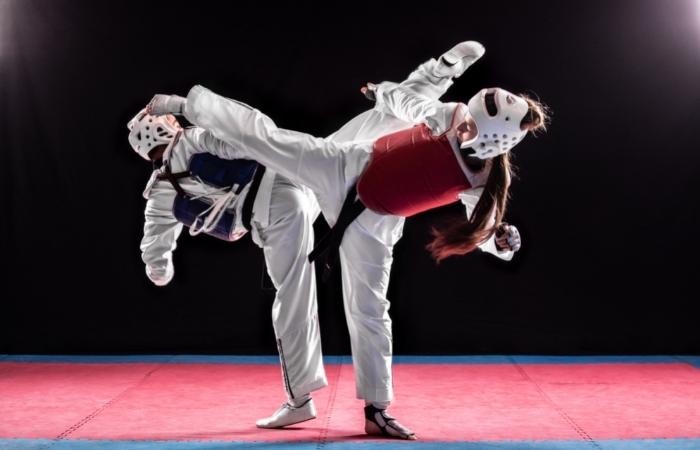 Taekwondo Got Its Start Here

The American Taekwondo Association (ATA) has been instructing students and impacting lives for over 50 years. Its creation dates back to 1969 in Omaha, Nebraska, by “Grand Master” Haeng Ung Lee. Its headquarters are located in Little Rock. 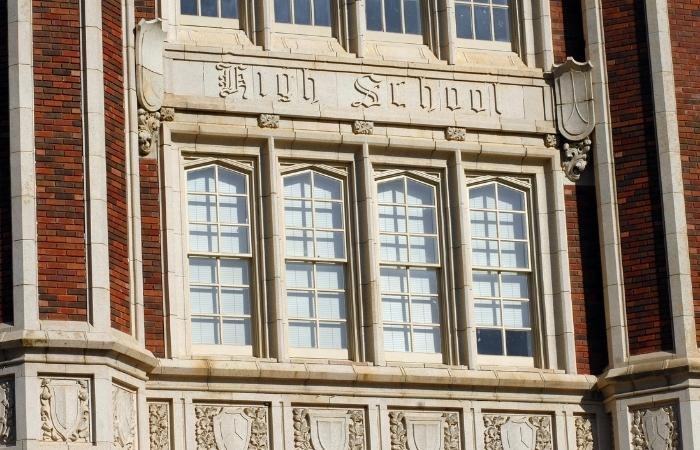 Schools For the Deaf and Blind Call Little Rock Their Home

The School for the Blind opened its doors in 1859 and currently serves over a hundred students, ranging from pre-kindergarten to 12th grade. 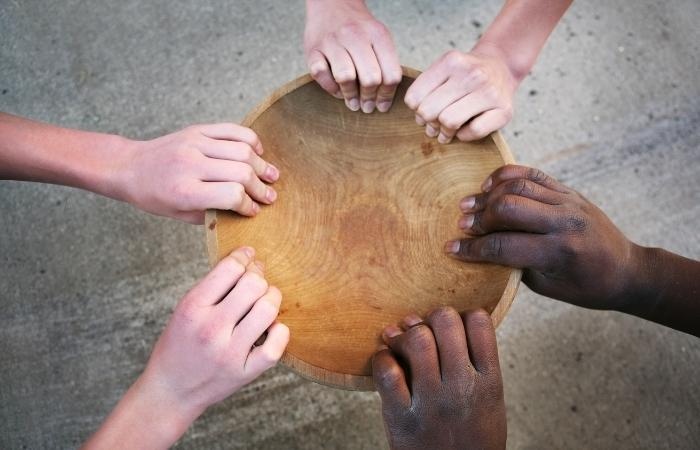 Many businesses have also started in Little Rock. From Dillards to Heifer International, Little Rock is very amicable for businesses starting out.

In return, all they ask from the families who receive their help is to give back to others in need. Sharing their newly acquired agricultural knowledge, donating the offspring from the animals they were handed once their animals have offspring. 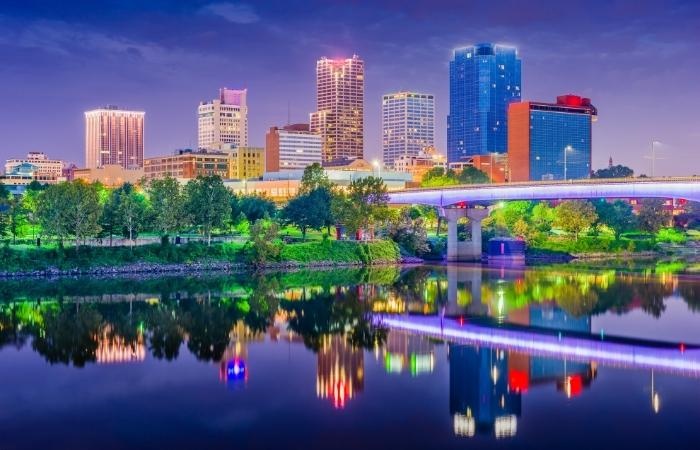 By now, there is absolutely no doubt that the city of Little Rock is full of exciting surprises, anecdotes, and golden nuggets of history. So make sure that a visit to this magnificent city is on your bucket list.