Top 17 Things Louisville is Known For & Famous For 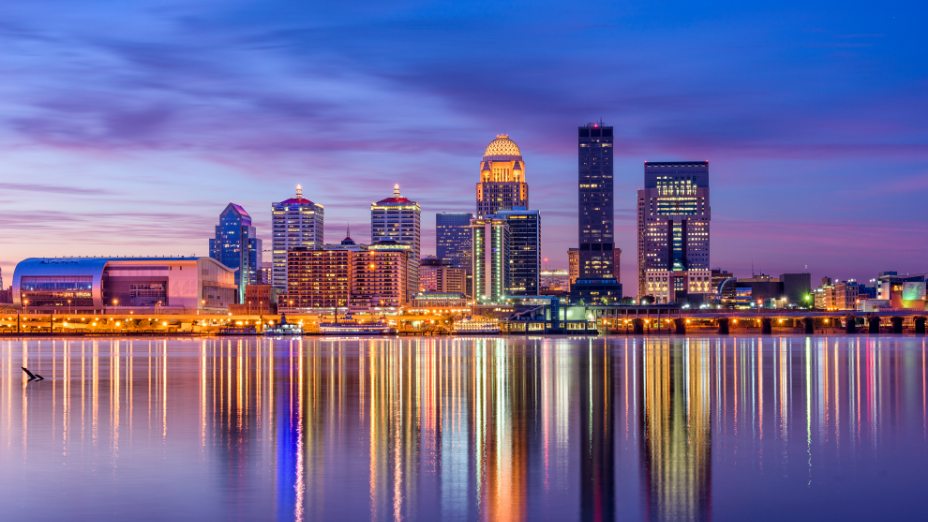 What Is Louisville, Kentucky Known For

Louisville, Kentucky is the largest city in Kentucky and is home to the Kentucky Derby. Are you curious about what else it’s known for?

Louisville, Kentucky is known for the Kentucky Derby, Mint Julep, and Louisville baseball. It’s also known for Muhammad Ali and his famous boxing style. The big hats seen at the derby got their start in Louisville as a marketing stunt.

Established in 1789, Louisville, Kentucky, is a city full of entertainment and fascinating history. In this article, I’ll be discussing the Kentucky Derby, the history of Louisville Baseball and the Louisville Slugger, and Louisville as the home city of world-renowned Muhammad Ali. 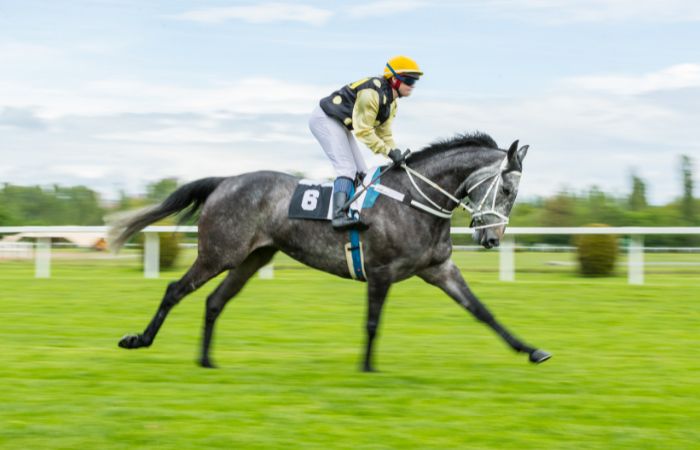 Home to the Kentucky Derby

One of the most notable aspects of Louisville, Kentucky, is that it’s home to what many consider to be among the top five horse racing events in the world- the Kentucky Derby. This prestigious horse racing event is held annually at the 147-acre (59.49 hectares) equestrian complex, Churchill Downs, on the first Saturday in May.

This enormously popular racing event brings in an average of 160,000 people to Louisville each year who come to watch the race and participate in the various traditions of attending the event.

The History of Churchill Downs

The construction of Churchill Downs in Louisville, Kentucky, commenced in 1872 after founder Colonel Meriwether Clark Jr. became inspired to expand the horse racing industry in the US. This inspiration came from attending the prestigious thoroughbred horse race, the Epsom Derby, in Surrey, England.

It’s certainly no wonder that the derby is one of the most widely known aspects of Louisville. 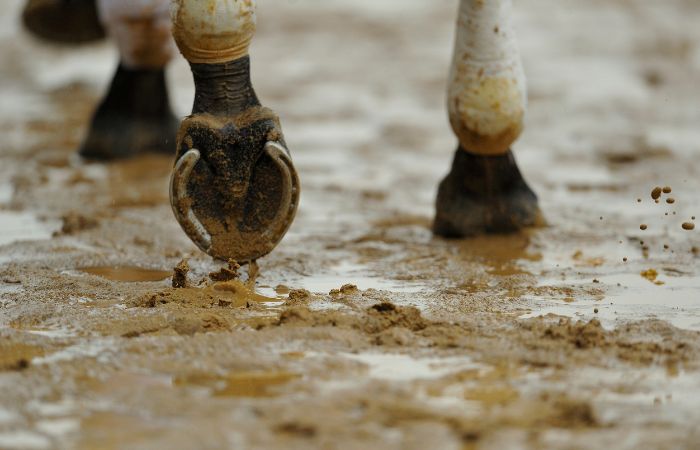 How the Race Works

Each year, 20 exceptionally fast thoroughbred racehorses compete in the Kentucky Derby. In order to obtain a spot at the event, these horses are raced at 35 qualifying matches around the world, known as the Road to the Kentucky Derby.

The dirt track at Churchill Downs is 1 ¼ mile (2.01 km) long, and it takes about two minutes for the horses to complete the race. The legendary racehorse, Secretariat, still holds the fastest Kentucky Derby record when he blasted around the track in 1973 at 1:59.4 minutes.

Attendees can bet on their favorite horse, whooping and hollering encouragement to their chosen equine as they fly around the track.

When the race is done, the winning purse is divided up among the top five finalists. The winning horse owner takes about a 60% cut of the total purse, and the jockey and trainer each get about 10% of the owner’s winning.

Traditions of Attending the Kentucky Derby

If you’ve ever seen photos of people attending the Kentucky Derby, then you might have wondered what the deal is with all those big, fancy hats? Besides the two minutes of horse racing, part of the fun for attendees of the event is all of the race’s spectator traditions. 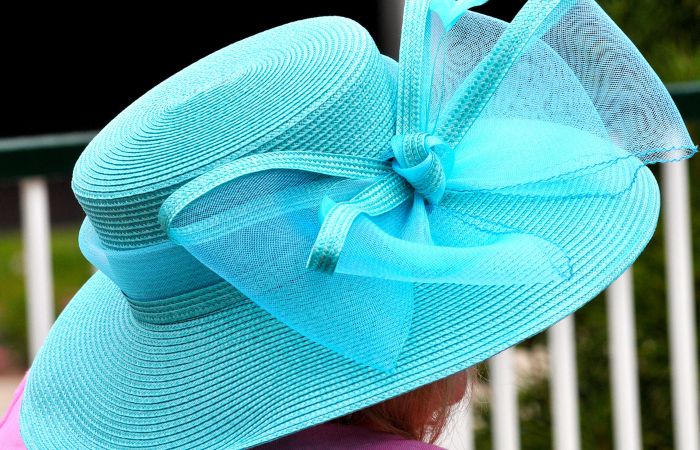 In the late 19th century, when Churchill Downs was established, attending betting events in America was typically viewed as a bit of a nefarious activity full of drinking, general rowdiness and was certainly no place for a lady.

However, co-founder of Churchill Downs, Col. Meriwether Clark Jr. wanted to make sure that his race track would be modeled after horse racing in England, associated with refined society and wealth.

So, Colonel Meriwether persuaded a group of well-to-do ladies of Louisville to promote his event as a high society function. The idea was a success and ensured that fashionable attire (and fashionable hats) became an integral part of the Kentucky Derby since its inception. 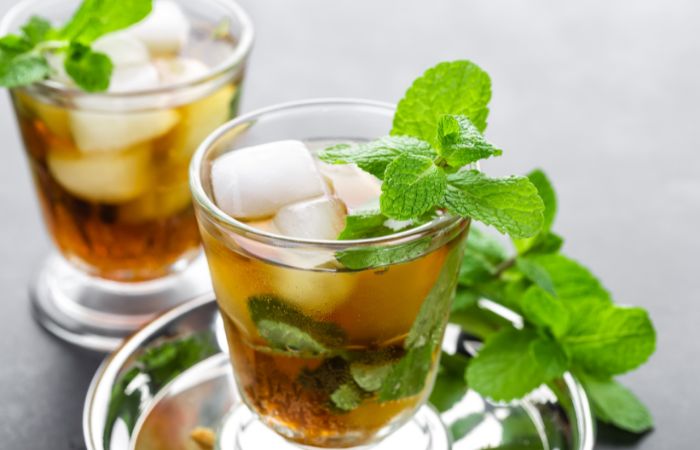 The Drinking of Mint Julep

Mint Julep is the official drink of the Kentucky Derby and is composed of Kentucky bourbon, crushed ice, sugar, and fresh mint leaves.

Bourbon was already an extremely popular liquor in Kentucky when Churchill Downs established its race track, and mint julep was quite possibly the drink of choice for race attendees from the first Kentucky Derby.

The Economic Impact of the Kentucky Derby on Louisville

Often quoted as “the most exciting two minutes in sports”, horse racing has captivated audiences for thousands of years. This captivation is undoubtedly good news for the economy of Louisville, KY, and its surrounding areas, and the Kentucky Derby definitely does not disappoint in bringing in revenue for the city. 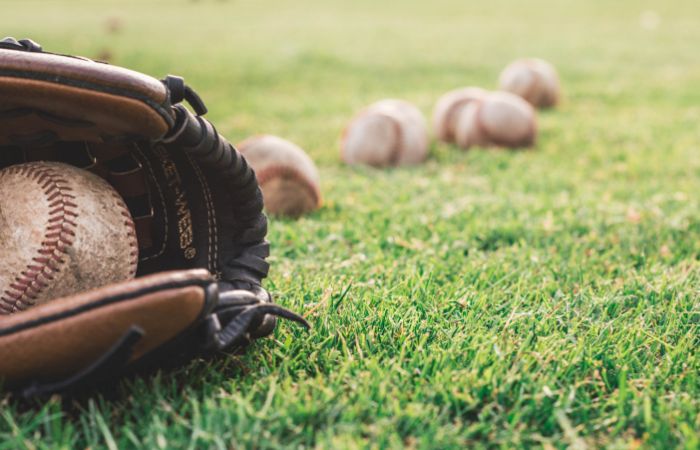 The Louisville Slugger is a world-famous and immensely popular bat brand.

Today, the Louisville Slugger is the Official Bat of Major League Baseball. Not only is the slugger important to baseball and its fans, but it’s also a source of pride for its hometown of Louisville, Kentucky. In fact, baseball, in general, has a rich and storied history in the city.

Importance of Baseball in Louisville

By the mid 19th century, baseball captured the hearts of fans across the midwest and east coast of the United States. Even during the brutal and bloody civil war, baseball served as a beloved pastime for soldiers to distract them from the horrors of war.

In Louisville, baseball had been a popular pastime since the 1850s, and by 1876, the city’s first major league baseball team, the Louisville Grays, was established.

The establishment of major league baseball in Louisville accompanied the creation of the National League of Professional Baseball Clubs, created by Chicago’s William Hulbert. The Louisville Grays were among the eight original clubs. 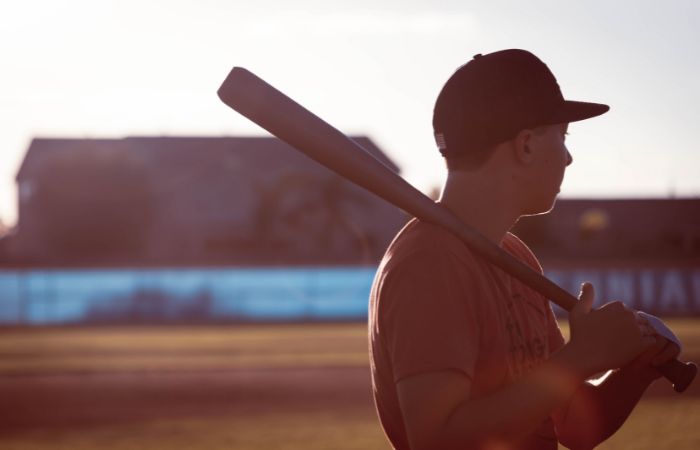 See, in the mid-1800s, baseball was a rather rough sport. The rules of this recently invented game weren’t often followed, and baseball’s rowdy fans rather enjoyed the fights and rumbles that would break out as teams, owners, and referees quarreled.

This whole debacle seemed to culminate in a series of 1877 fixed games played by Louisville, Kentucky’s darling major league team, the Louisville Grays.

Essentially, four players were accused of accepting money in exchange for purposely losing games. This meant that betters who were in on the scandal would know how to bet, and the players would profit from losing.

Once the scandal became public, the National League booted the four accused players and banned them from playing professional baseball. The public was broadly supportive of the League’s decision as many people wanted to see an end to the rampant corruption that was plaguing baseball at the time.

The Louisville Grays were unable to bounce back from the scandal and disbanded in 1878. The Louisville Eclipse, formed in 1882, was the next major league baseball team to call Louisville, Kentucky, home.

It was from this team, along with a brilliant young woodworker, that the iconic Louisville Slugger was born. 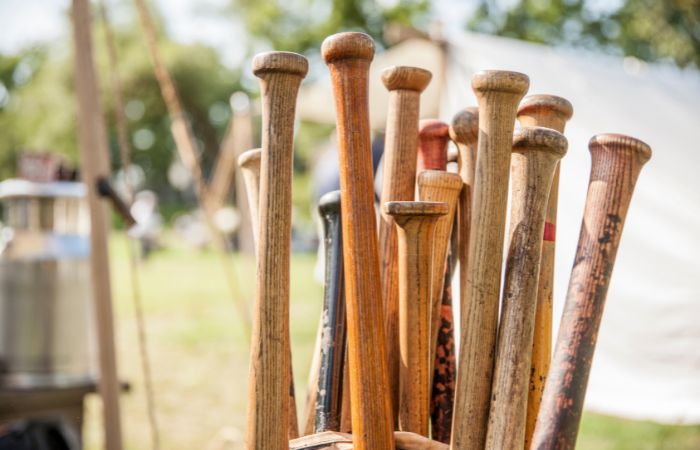 History of the Louisville Slugger

The history of the Louisville Slugger is rooted in the story of the Hillerich family, German immigrants to the United States, who opened a successful woodworking shop in Louisville, KY, in 1864.

The oldest son of the Hillerich family, John Andrew “Bud” Hillerich, was born in Louisville in 1866 and grew up learning his father’s woodworking craft.

By 1880, Bud was an apprentice in his father’s shop. He also enjoyed playing amateur baseball, and it was this synthesis of his woodworking skills and love for baseball that led to the creation of the famous Louisville Slugger.

The Louisville Slugger Is Crafted

While some debate just how the first Louisville Slugger came to be produced for a professional player, according to company history, it all started when Bud played hooky from work one fine, spring afternoon in 1884.

On this day, Bud attended a game of Louisville’s major league team, the Louisville Eclipse.

At this fateful game, Bud witnessed Louis Rogers “Pete” Browning, a favorite player on the Louisville Eclipse, break his bat. Bud offered to craft a better, stronger bat for Browning, who was also known as “The Louisville Slugger”.

The proposal was a success, and Bud created an excellent bat for the professional player. At the very next game, Pete Browning stepped up to the plate with Bud’s bat, and the era of the Louisville Slugger was born.

Today, Louisville embraces the history of the iconic bat with the highly popular Louisville Slugger museum and factory and its famous 120’ (36.58-m) tall replica of the beloved baseball bat. 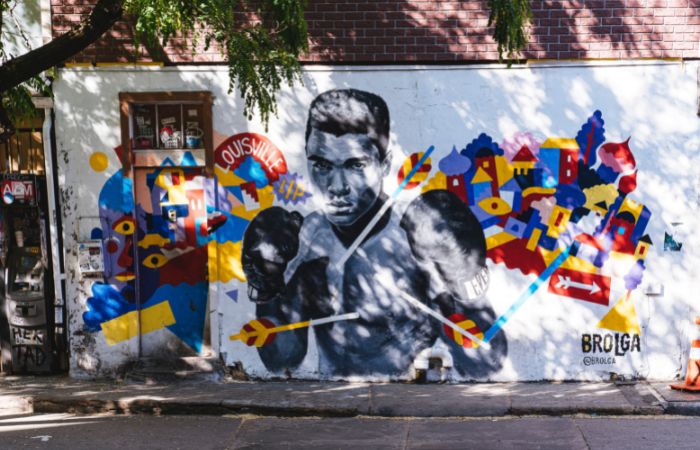 Louisville, Kentucky, is the home city to the world-famous boxing legend and passionate civil rights activist and anti-imperialist Muhammad Ali.

Ali brought great pride to his city of Louisville, especially for the city’s black residents. They watched as he became a champion boxer and used his fame to further the Civil Rights and anti-imperialism struggles of the mid to late 20th century.

Today, the multicultural center and museum, the Muhammad Ali Center, exists to honor the legacy and values of Louisville’s champion.

Muhammad Ali was born in 1942 and raised on the West End of Louisville. His birth name was Cassius Marcellus Clay, Jr. However, as he became more invested in black liberation, he changed his name to Muhammad Ali to represent the distancing of his Anglo-originated birth name and eurocentrism.

Ali got his start in boxing when he was 12 after his bike was stolen, and the young Muhammad committed to learning how to fight and defend himself. He quickly progressed as a boxer, as he trained and fought at Louisville’s then Columbia Gym, which is now the University Center at Spalding University. 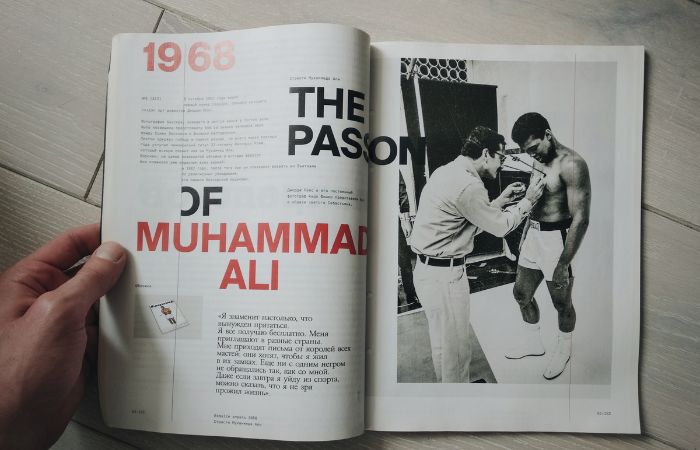 The rising star went on to fight at other venues around Louisville, such as the Louisville Gardens and Freedom Hall. In 1957, Ali fought at the Louisville Golden Gloves Tournament, and in 1960, Muhammad brought honor to Louisville when he won a gold medal in boxing at the Rome Olympics.

Ali was only 18 years old and fought for a mere 6 years when he brought home the Olympic gold medal.

Muhammad Ali’s first professional fight was on October 29th, 1960, at Freedom Hall in Louisville, Kentucky. He won all six rounds of the fight, breaking into his professional career like the powerhouse fighter he is known for being worldwide.

The prolific and iconic boxer went on to compete in 61 fights, of which he won 56. Not only was his record awe-inspiring, but the fighter was practically unmatched in the quality of his fighting and the speed, and agility, in which the heavyweight would dance circles around his opponents.

Champion of Civil Rights and Anti-Imperialism

Muhammad Ali was a passionate advocate for the liberation of oppressed peoples, and he used his fame to further the cause of social justice and peace.

In 1967, Ali refused to fight in the Vietnam World, taking an ethical stance as a conscientious objector. In an interview, Muhammad Ali explained, “my conscience won’t let me go shoot my brother, or some darker people, or some poor hungry people in the mud for big powerful America”.

Today, the public can visit the Muhammad Ali Center in Louisville, Kentucky, to learn the history of Ali’s incredible boxing career and the humanitarian principles and values that defined the boxer’s character and actions. The center also provides regular events and uplifting, educational programming for Louisville’s youth.

While Muhammad Ali passed away in 2016, the center continues to inspire with Ali’s six core principles of: 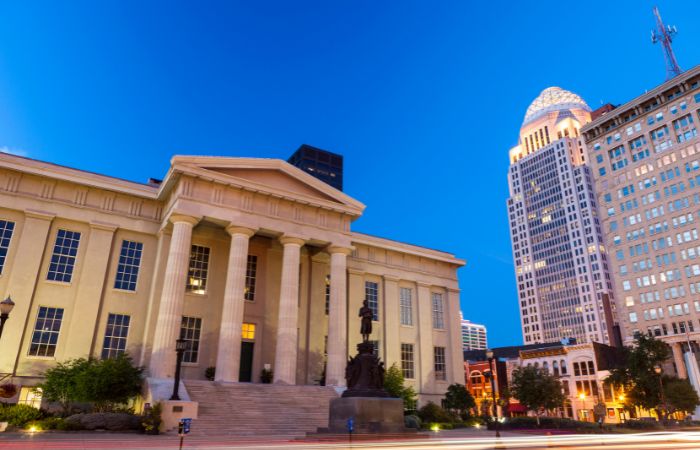 From the world-famous yearly event of the Kentucky Derby to representing the iconic bat of America’s Past-Time, to being the home city of the champion of boxing excellence and social justice, Louisville, Kentucky, proves itself to be a genuinely fascinating, entertaining, and profound city.

If you’re planning visit to Louisville be sure to check out 100 Things to do in Louisville Before You Die here.