Top 18 Things Madrid is Known for & Famous For 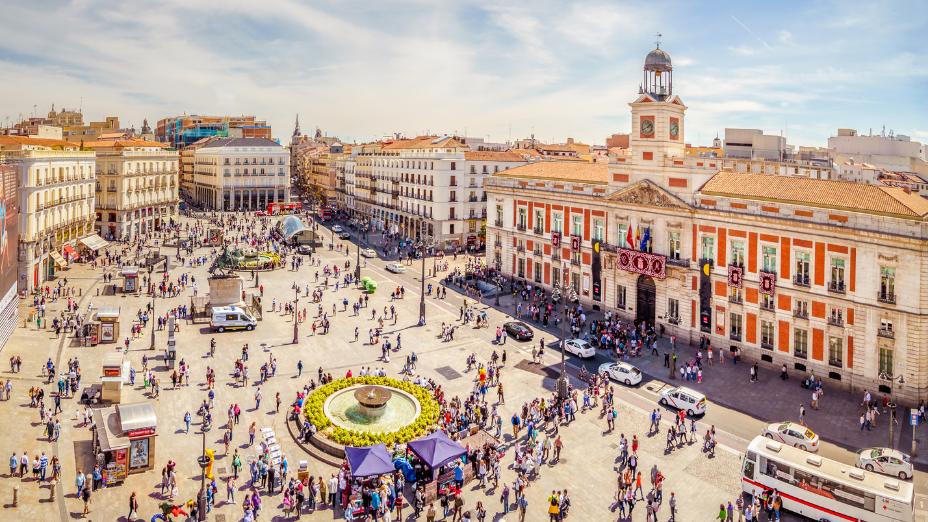 What Is Madrid, Spain Known For

Madrid, the capital of Spain, is known for so many things. As one of the biggest tourist centers in Europe and one of the oldest capital cities in the west, it’s famed for countless attractions. However, there’s much more to Madrid than you might think.

The citizens of Madrid are also known for their friendly energy and lively spirit, and their city has much the same characteristics – so it’s not surprising that they’re famed for long life expectancies. Keep reading to learn more about what Madrid is especially known for, including its nightlife, food, architecture, sport, parks, dance, and palaces. 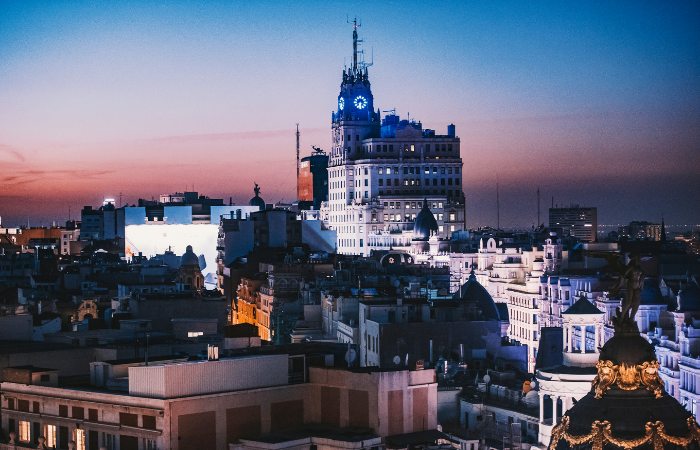 Facts You May Not Know About Madrid

Madrid is known as the city of the “bear and the strawberry tree.” A large monument commemorates this in central Madrid and is very popular with tourists.

Interestingly, Madrid isn’t just a city: it’s also a state and one of the 17 self-governing states of Spain. Elevated at about 700 meters (2,296.59 ft) above sea level, the city was founded around 860 A.C. – so it’s a lot older than you might have thought.

The citizens of Madrid are called “Madrileños,” and are often fondly referred to as “Gatos” (cats). This is a name that alludes to medieval soldiers who climbed the walls “like cats” to conquer the city.

Additionally, Madrid is known as the sunniest city in Europe, a fact which its residents take into account when partaking in the traditional, daily siesta.

Madrid is also a European cultural capital, owing to its fantastic art scene and architectural excellence.

What Is Madrid Most Famous For?

Madrid is most famous for its exciting student life, nightlife, culture, food, and shopping. The city also has renowned gardens, popular sports teams, Flamenco dancing, and beautiful churches and palaces.

Here’s a breakdown of these attractions to help you understand why Madrid is one of the most famous cities in the world: 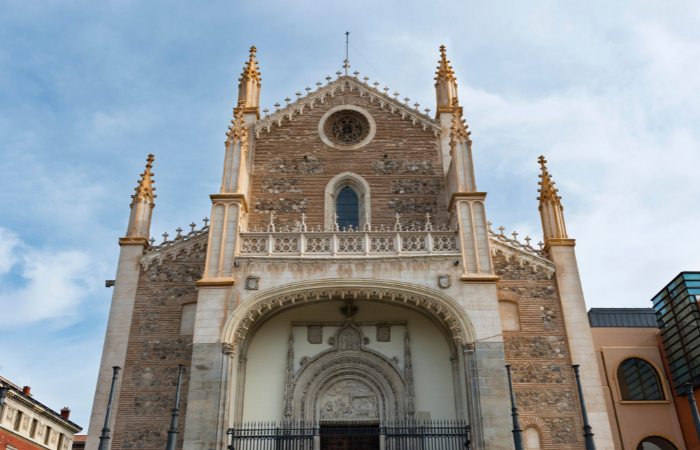 Madrid is world-renowned for its cultural features. The city has countless prominent museums, such as the Thyssen-Bornemisza Museum, a beautiful art gallery situated on the Golden Triangle.

The Golden Triangle consists of three museums: Thyssen-Bornemisza, Prado Museum, and Reina Sofia Museum. These important cultural centers are cherished by art lovers worldwide and contain some of the finest and most prominent art pieces in Europe.

In fact, there are 44 Museums in Madrid in total, among which the Museum of Decorative Arts, Museum of America, Ikono Gallery, and the Romanticism museum have proved the most popular among art enthusiasts.

Aside from museums, the city is also well-known for Matadero Madrid; the Matadero is a cultural center in a building that used to be a slaughterhouse. It now houses buzzing markets every weekend and free exhibitions.

Culture is an integral part of life in Madrid, and Madrileños take this very seriously. Every day, the traditional siesta dictates the opening hours of most shops; because of this, late-night hours are kept by most people, and many shops stay open until 9 pm.

A Haven for Students

Madrid is a student haven, with 14 universities spread across the city, according to Statista. Being a center of higher education, it has the largest population of students in Spain.

The Open University, Complutense University, and Polytechnical University are the most heavily populated campuses in Madrid. They’re all located in the Ciudad Universitaria, which is an area primarily occupied by students.

As well as established public universities, Madrid also has many private institutions of higher education. 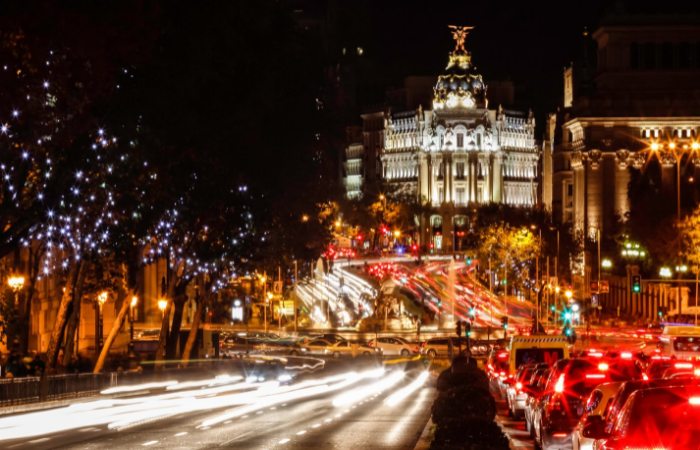 Madrid is exceptionally famous for its nightlife. Chueca, the center of Madrid’s LGBTQ+ community, is often the busiest place to hang out in the evenings – and it’s the heart of the annual Gay Pride Festival, which takes place in the summer months.

The city’s wine bars are also very trendy. Bendito Vinos y Vinilos is one of the most prominent wine bars in the city, and its customers regularly enjoy some of the finest wines Spain has to offer.

Nightclubs are celebrated in Madrid, with regulars hitting Teatro Joy Eslava, the renowned Ya’sta, and Museo Chicote every night of the week. Thanks to its large student community and young citizens, nightlife in Madrid has boomed over recent years.

Teatro Kapital is arguably the most fashionable club in Madrid and has a massive crowd of regulars, making it one of the city’s most popular nightlife hotspots.

The late hours kept by the citizens of Madrid are a telling aspect of cultural life here; the majority of people are out most evenings, enjoying the fantastic nightlife and catching up with friends. 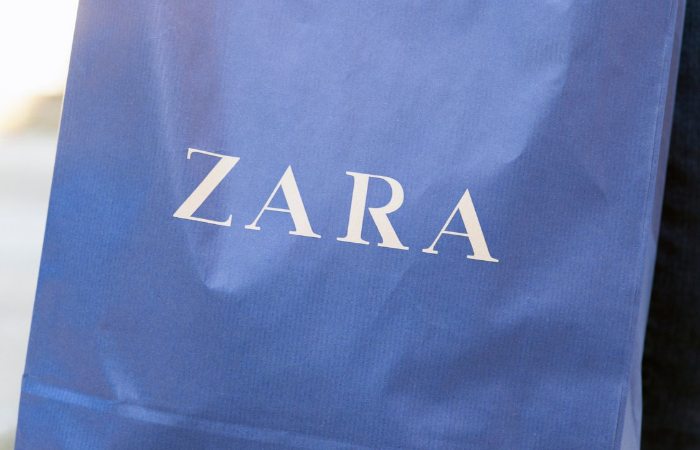 Center of Shopping and Commerce

Madrid, second only to Barcelona, is one of the most prominent places for shopping in Spain. You can find something for every budget, and street markets are often the best place to go.

El Rastro Flea Market is an open-air market that sells numerous items, such as used clothing, jewelry, and bags, among other things. There are more than 3,000 stalls at El Rastro, and you can bet it’s always busy. Madrid’s inhabitants treasure their open-air markets, and several operate seven days a week.

Most famously, Madrid is also home to the biggest Zara in the world. After its opening in 2017, it became one of the busiest stores in the country. Spaced across about 65,000 square feet (6,03.70 sq. ft), this Zara is one of the most popular places to shop in the city. 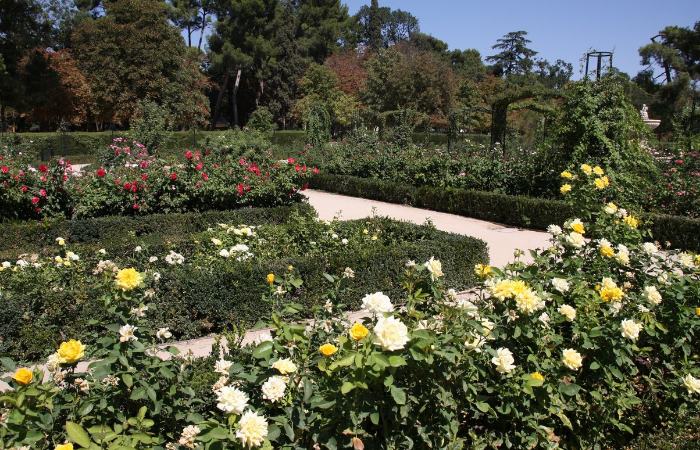 Madrid is famous for its lush parks and public gardens. There are more than 40 public park spaces in the city, each with its own peculiarities and architectural characteristics.

The city especially sets itself apart from other Spanish cities because of the Ancient Egyptian Temple of Debod, situated within the gorgeous setting of Rosales Park.

The Temple of Debod dated back to the 2nd century and was a gift from the Egyptians in the 20th century.

Some of the most famed parks in Madrid include El Retiro, in which lies the ostentatious fountain dedicated to the “fallen angel,” the Royal Botanic Gardens, and Oeste Park, with its beautifully polished rose garden.

The City of Sport

The city is especially famous for its annual matches against Barcelona, which brings festivities and carnivals to its streets.

As well as football, Madrid is also Spain’s bullfighting center. Famous for having the biggest bullring in the country, Las Ventas, it’s the cornerstone of the Spanish bullfighting tradition.

Every year in Las Ventas, bullfighting trainees come from all over Spain to enact the alternative, an event that marks the beginning of their established careers.

The football season in Madrid runs in the summer months, with international coverage and lively post-match festivals. Conversely, the bullfighting season in the city is from March to October.

Flamenco is wildly popular in Spain, but in Madrid, the opportunities to see Flamenco shows are endless.

This traditional dance sets Madrid apart from other Spanish cities, and people come from all over the world to experience it. Throughout the week, Flamenco shows occur all over the city.

Corral de la Morería, the oldest Flamenco venue in Madrid, is the most famous, and people gather every night to have dinner and enjoy the show.

There are several beautiful palaces and historical buildings in Madrid, including the most famous, El Palacio Real (the Royal Palace of Madrid).

Although it’s famed for being the official residence of Spanish royals, they don’t actually live there; instead, they live on the city’s outskirts. The home of King Felipe VI and his wife Queen Letizia is the esteemed Palacio de la Zarzuela, which was built back in 1630.

Among others, Palacio de Liria and Palacio de Linares are the most famous. With their beautiful architecture and historic appearance, they attract thousands of tourists every year. 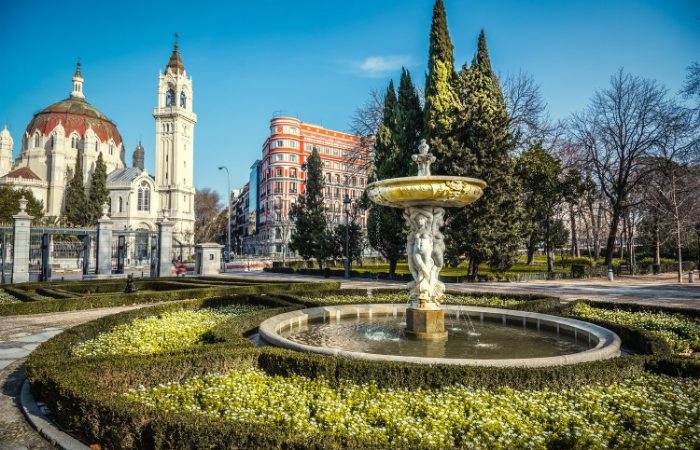 Churches and Convents in Madrid

Madrid is famous for its vast number of churches, convents, and monasteries. The Royal Convent of La Encarnación is one of the most famed, as it mostly housed the Spanish nobility and was one of the wealthiest convents of its time.

Other acclaimed religious sites include the Church of San Manuel and San Benito and the Cathedral of Almudena, which is the head of the Roman Catholic Church in Madrid. 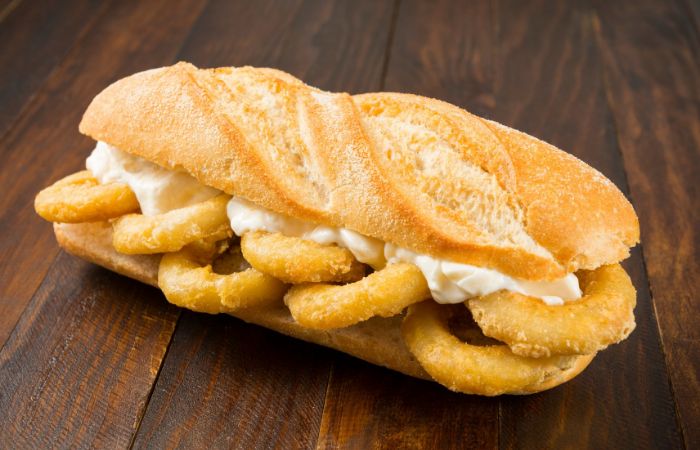 Food is incredible in Madrid – and it’s one of the top culinary destinations in Europe. It’s also one of the most famous pastry capitals of the west.

Plaza Mayor, Madrid’s central square, houses some of the best snack food in the city. Famed for delicious deep-fried calamari sandwiches, it’s one of the culinary hotspots of the area. These calamari sandwiches are not to be missed, and are very popular with Spanish locals.

Unsurprisingly, tapas culture is big in Madrid as well and originates from the region of Andalucía, bringing traditions from all over Spain to this cultural hub.

One of the most famous restaurants include El Botin, which is distinguished for its roasted suckling pig (Cochinillo) and is the oldest restaurant in the world. Founded in 1725, the restaurant is heralded as a return to the origins of traditional Spanish cuisine. Every year, people travel from all over the world to visit.

One of Madrid’s most illustrious food markets is Tripea; this is a celebrated market selling different types of fusion foods and is the only fusion market in the city. They feature Peruvian-style tapas bars and an assortment of Asian-inspired foods.

Excellent culinary traditions have led to the opening of innumerable famed restaurants in the city, including Dani García, whose Michelin star restaurant can be found atop the Four Seasons Hotel. 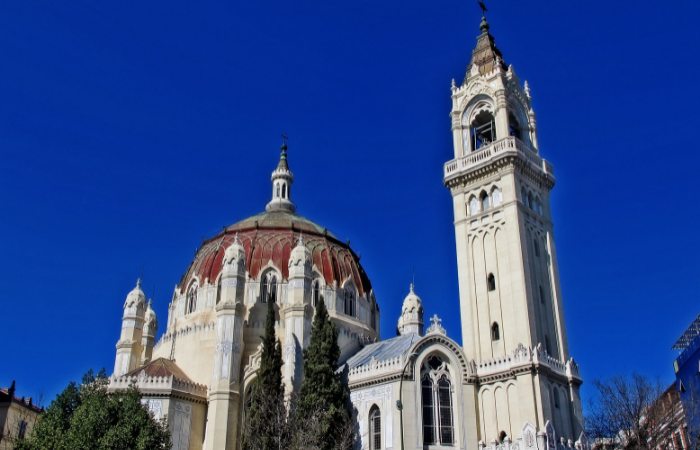 Madrid is arguably the most famous for its stunning architecture. The multitude of city squares, such as Plaza Mayor, the center of Madrileña life, and Plaza de la Paja on Madrid’s medieval market, bring tourists far and wide.

Puerta del Sol is highly distinguished for being the middle of all of Spain’s major highways. Fondly named “Kilometre 0”, it is widely known as the geographical midpoint of Spain.

Being the third biggest city in the European Union has its perks. The city is big enough to house a plethora of unique architectural specialties in each of its neighborhoods.

Each neighborhood in Madrid has its own distinguishable style. The city’s inhabitants are very attached to its landscape and often congregate in the city’s squares.

The most beautiful architecture in Madrid can be found at Plaza de Santa Ana, with numerous balconies and terraces housing tapas, bars, and theater hotspots.

After the Spanish Civil War (1936-1939), the country’s production industry began to boom. Once the country started to recover from the war, the industry moved to Madrid, and it is now known as the country’s center of commerce.

As one of the most buzzing, production hotspots in the country, it’s the center of the automotive and electrical industries and the home of the Spanish Stock Market.

The publishing industry also has a big name here in Madrid. 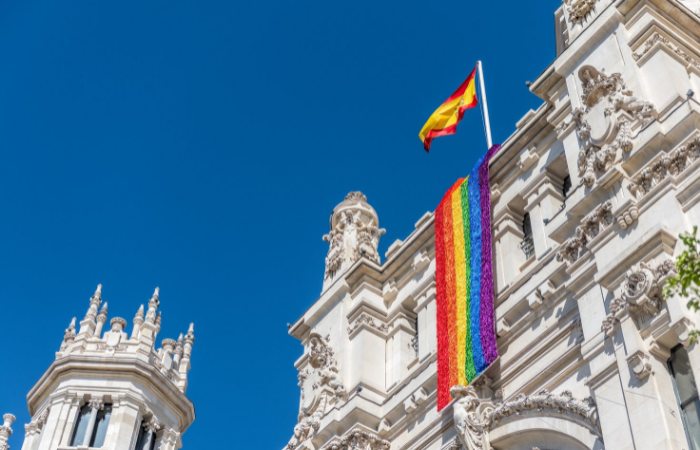 As you can see, Madrid is famous for many things. It’s a hub of commerce, shopping, nightlife, and entertainment, and attracts people from all walks of life.

Locals are very attached to their beloved city, and now you can understand why. Madrid has something for everybody and every budget, and as a cultural capital, the atmosphere is vibrant and eclectic.

The city is definitely worth a visit, and it’s a place you won’t want to miss!

If you’re planning a visit to Madrid we recommend checking out Lonely Planet’s travel guide to the city here and to book accommodation we love booking through Hostel World here!