12 Cool Things Munich is Known For & Famous For 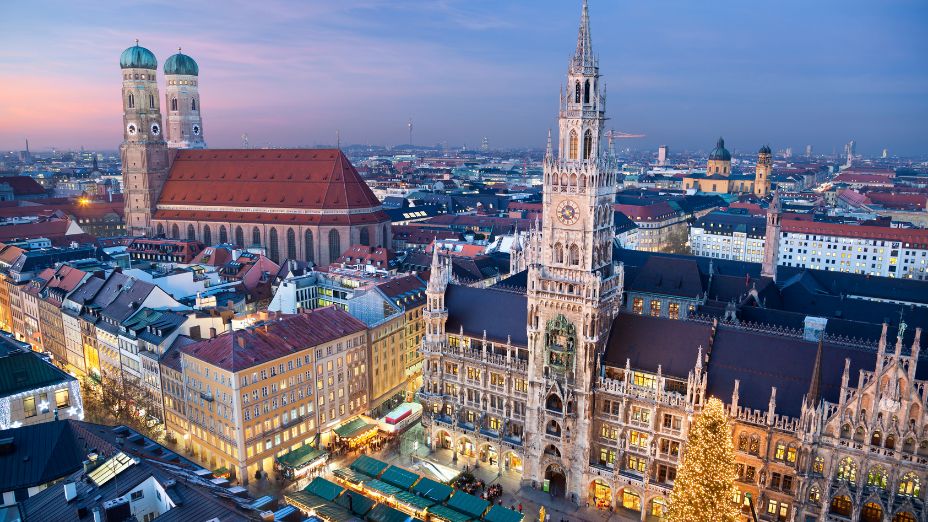 What Is Munich, Germany Known For?

Located just off the banks of the Isar River in Bavaria, Munich is a city brimming with impressive landmarks and enjoyable attractions. Whether visiting or settling down as a permanent resident, you’ll come across an abundance of opportunities to engage in Munich’s vibrant culture.

There are dozens of things to do and try in Munich, making it a hub for tourists from all around the world. It’s such an incredible city that British magazine Monocle listed it as the “most liveable city in the world.” Read on to learn more about the world-famous Munich, Germany. 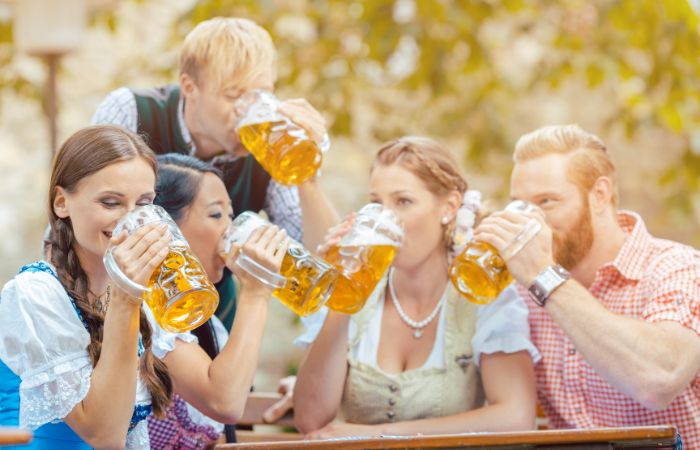 Munich Is Home to Dozens of Beer Gardens

Home to the world’s most famous beer tavern in the world, Munich is renowned for this frothy alcoholic beverage. The city boasts the self-proclaimed “world’s best beer,” and its people take pride in their many breweries, festivals, and gardens dedicated to the hoppy drink.

Hofbräuhaus is considered Munich’s most well-known brewery and the most famous beer tavern in the world. The brewery exports its spicy Hofbräu Dunkel beer worldwide, and the historic beer hall is centuries old and attracts over a million visitors every year. What makes the beer extra special is that the hops are sourced locally from the Hallertau in Bavaria.

Beer festivals are also popular in Munich. The Nockherberg Starkbierfest is the most popular, held in March during Lenten. Like many of Munich’s taverns, the festival has been around for centuries—started by Paulaner monks in the seventeenth century. The festival was relatively small but began drawing in crowds after being publicly televised in the 1980s. Starkbierfest means “Strong Beer Festival.”

In addition to taverns, breweries, and beer festivals, Munich is home to dozens of beer gardens. Beer gardens, or “Biergarten” in German, are outdoor areas where people serve beer, food, and other refreshments.

Some of the beer gardens in Munich include: 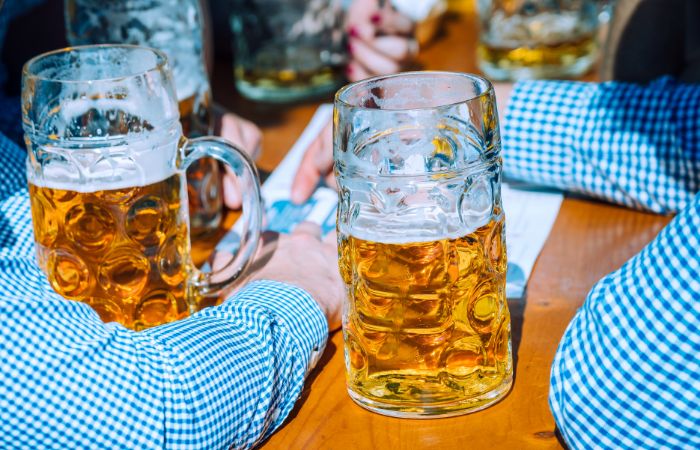 One of the most well known things about Munich has to be its annual beer festival, Oktoberfest.

This annual beer festival, held for two weeks in September/October, is known for being one of the largest festivals in the world with millions of people attending each and every year. 2019 saw 6.3 million visitors to the festival and 6.9 million liters of beer consumed.

If you’re planning a trip to Munich during this time you won’t want to miss this festival! Be sure to dress to impress with the proper attire. Women wear a traditional Dirndl and men wear the original Bavarian Lederhosen pants. 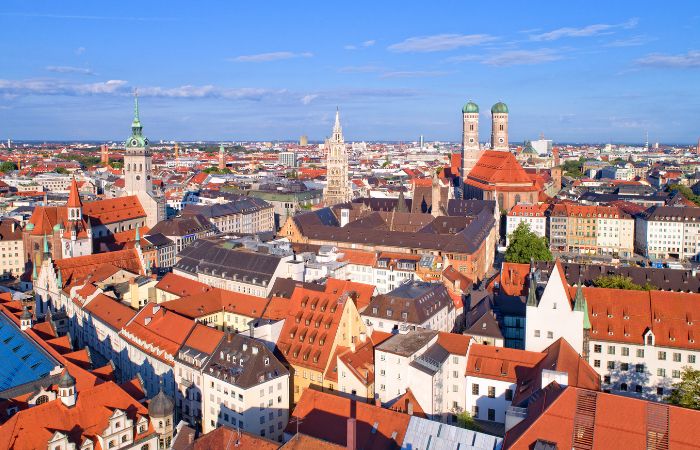 Munich Has a Globally-Significant Economy

Globally, Munich is among the fifty most connected cities in the world. In 2020, the Globalization and World Cities Research Network (GaWC) listed Munich as an “alpha city.” GaWC considers alpha cities as significant regions that connect major economic areas of the world.

Munich’s economy benefits from its diversified sectors, including:

The city is home to dozens of multinational companies and corporations, including BMW, Allianz, Munich Re, and MTU Aero Engines.

Munich also draws a lot of revenue from tourism. Estimations show that over 70 million people visit Bavaria’s capital every year. The multitude of architectural and cultural sites and attractions, captivate visitors, leading many to make Munich a permanent residence. In fact, foreign-born citizens make up nearly 40 percent of Munich’s population. 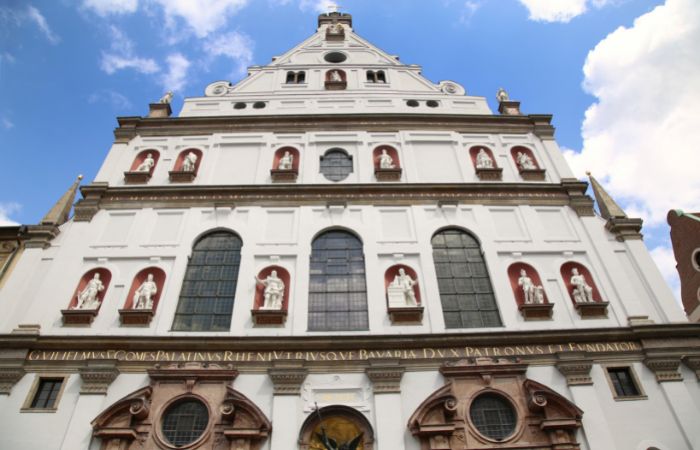 Munich Is Renowned for Its Stunning Architecture

The splendid architecture is one of the main reasons tourists flock to the historic city of Munich. Some of the architecture is massive and dramatic, whereas other buildings are humble yet equally impressive. No matter where you travel within the city, you’re guaranteed to come across remarkable architecture that makes you stop in your tracks. 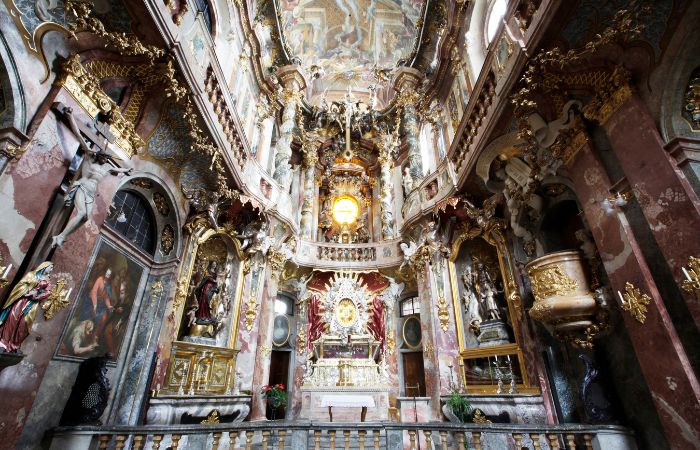 The Baroque architecture and ornate marble work, statues, and gloriously detailed paintings are a sight to behold in this quaint church. Built in the mid-1700s, Asam Church is a tiny church—72 feet by 26 feet (22 m x 8 m)—with a big personality. Egid Quirin Asam and Cosmas Asam built the church and covered it in paintings depicting moral messages. Their goal was to draw the young children of Munich back to the church in the hopes that they would lead righteous lives. 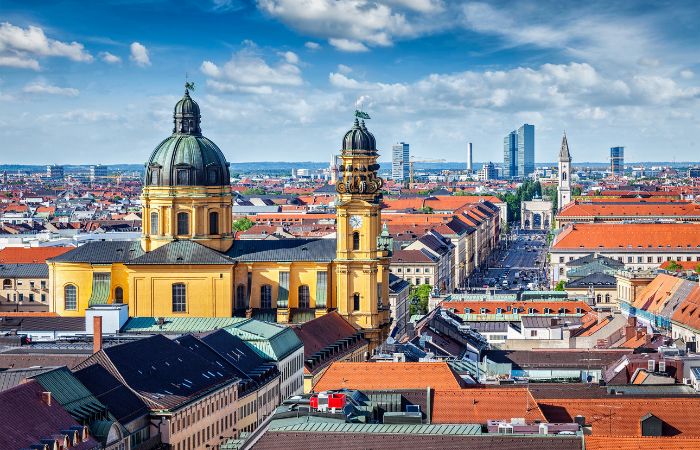 Cathedral of Our Dear Lady (Frauenkirche)

A landmark in Munich, Frauenkirche’s spherical domes dominate part of the Munich skyline. The Gothic design features upward pillars. The cathedral is centuries old, like many buildings in Munich. Construction began in 1468, but the warfare of World War II destroyed much of it. Since then, restoration projects are slowly restoring the church to its former glory.

Church of the Sacred Heart of Jesus (Herz-Jesu-Kirche)

Chances are, you’ve never seen a church quite like Herz-Jesu-Kirche. A Catholic church, Herz-Jesu-Kirche is uniquely impressive, recognized by its cube-shaped lined with glass. The interior is yet another cube made of wood. Designed by Allmann Sattler Wappner, the building fully opens up in the front, mainly for Catholic high feast days. 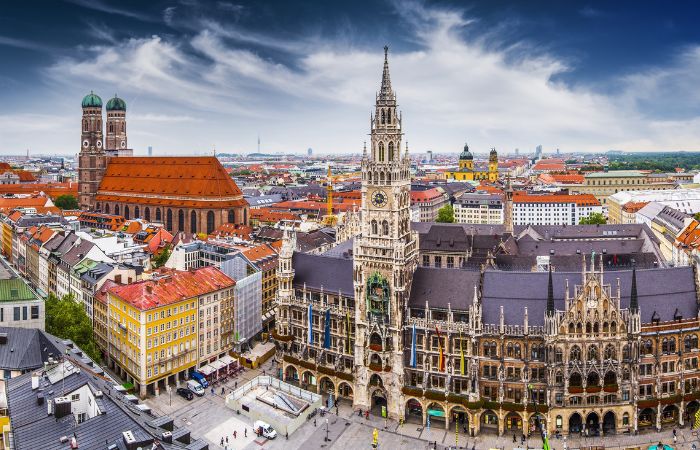 At the heart of Marienplatz stands The Neues Rathaus, Munich’s town hall. The building is recognized as one of the most famous in the city, thanks to its massive size and stunning Neo-Gothic architecture. The building is so impressive, in fact, that the architect, Georg von Hauberrisser, won an award for its design. 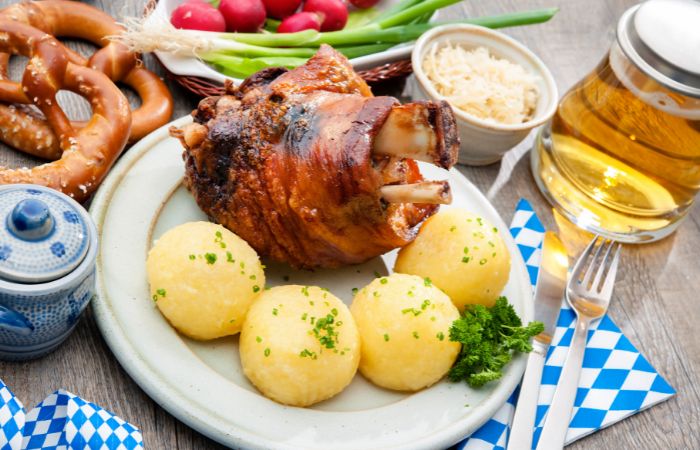 People celebrate Munich for its beer gardens, but the city’s food is equally as delicious.

Bavarian cuisine features traditional foods that date back to the medieval period, and much of Munich’s cuisine is meat-based. Some of the most popular foods in Munich include:

For more casual joints, try Gastrobar Kopper, Mural, or Trumpf oder Kritisch. For vegetarians and vegans, Gratitude is the venue for you. 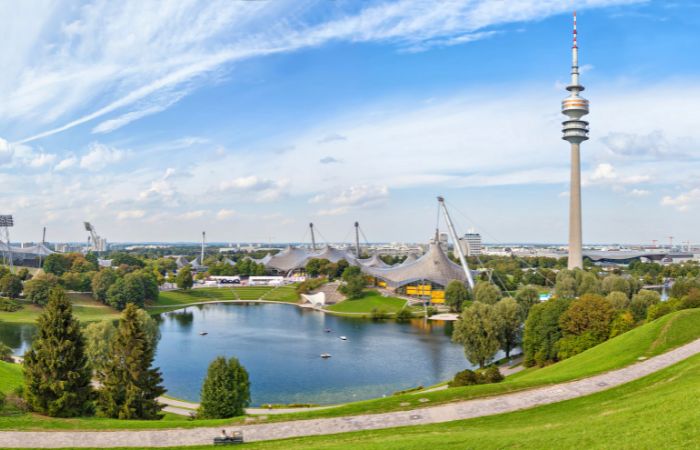 Much of Munich is open space, so it’s no surprise that the city hosts numerous public parks, including The Englischer Garten and Marienplatz Square.

Created in the 18th century, The Englischer Garten is located within the center of Munich. It’s considered one of the world’s largest public parks within an urban setting. On warm days, you may come across a crowd of nudists in the naturist’s area of the park—it’s a common sight and regular across Germany.

Marienplatz Square is even older than The Englischer Garten, dating back to the 12th century. It’s considered the busiest landmark within Munich. Photographers love Marienplatz, thanks to its gothic buildings and gargoyles. The area comes to life with the breathtaking Christkindlmarkt (Christmas Market) held in the square during the winter.

Other well-known parks across Munich include Ostpark, Olympiapark, Westpark, and Hofgarten. 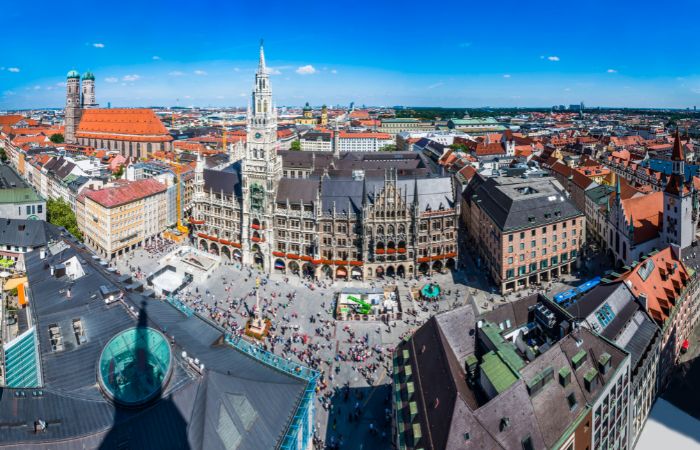 There is no shortage of shopping opportunities in Munich. Shoppers from all over Germany journey to the city to find bargains and high-end luxury items all in one city. One of the best bargain stores in Europe is Primark. Some of the more expensive shops include Louis Vuitton,  Armani, Chanel, Hermès and Gucci.

Three of the best places to shop in Munich include: 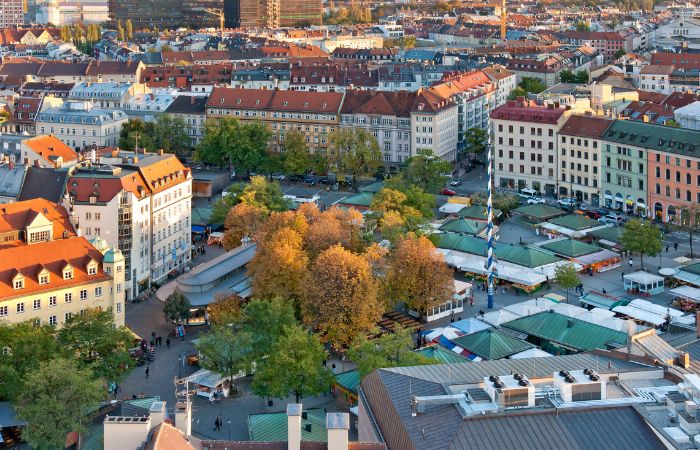 Munich is home to dozens of museums and art galleries, thanks to its centuries-old history. When visiting Munich, you won’t get the chance to see them all in a day or even a week, as there are over 80 museums located throughout Bavaria’s capital. The museums feature luxurious state-run facilities as well as smaller attractions with single themes.

Some of Munich’s museums include: 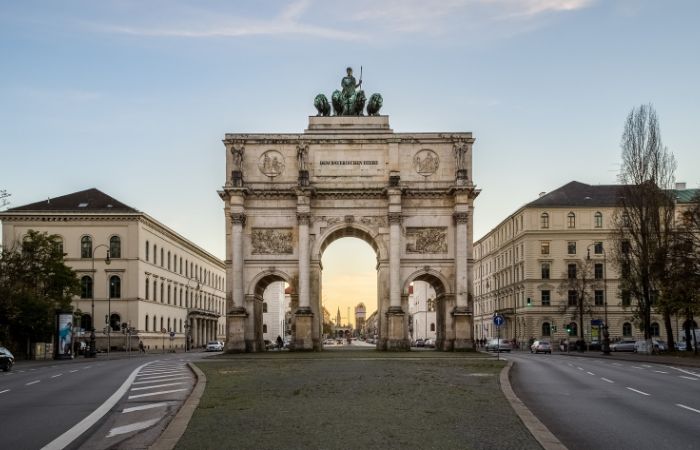 Bavaria’s capital city, Munich, is an active urban center, drawing in millions of people every year. The vibrant culture provides visitors with plenty of opportunities to take beautiful photos, try new beer and cuisine, cycle through well-kept parks, shop for unique items, and learn about the history of Munich through one of its many museums.

If you enjoy beer, food, medieval architecture, cycling, nature, shopping, or history, you will love Munich. Munich’s numerous attractions for various interests make it an irresistible place to visit and settle down.

If you’re planning a trip to Munich be sure to check out this guide with all the best things to do and see in the city!