Top 19 Cool Things New Mexico is Known For & Famous For 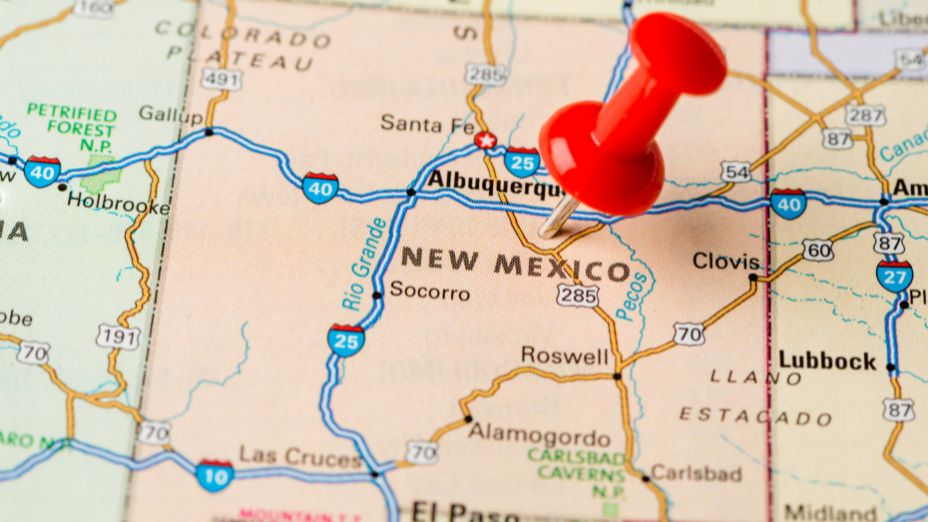 What Is the State of New Mexico Known For & Famous For

When people think of New Mexico, they often think of deserts, Native Americans, and aliens. To be fair, that’s quite the compelling combination all on its own. However, New Mexico has a lot more to offer than just those three things.

New Mexico is known for its food, culture, and art, in addition to beautiful desert scenery, a thriving UFO scene, and plenty of history. There are also ample opportunities for skiing and spelunking plus plenty of more modern places to visit, such as amusement parks, theaters, and more.

In this article, I’ll tell you all about New Mexico, from fun facts about its state symbols to tourist attractions and things to see. I’ll even cover some of its history and give you insight into which foods you don’t want to miss. What are you waiting for?—let’s get to it! 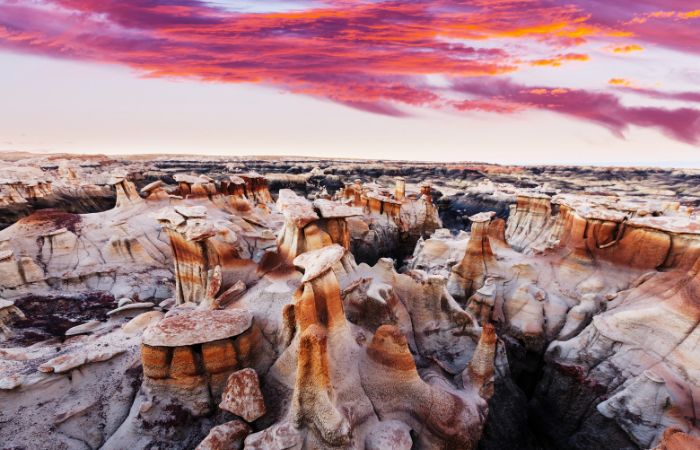 New Mexico is known for its beautiful deserts and its connection to current and historic Native American tribes (and Roswell, of course!). A little further on in this article, I’ll give you some info on what I think are the most beautiful, fun, and exciting places to visit while you’re there.

First, though, let’s talk a bit about New Mexico in less subjective terms. 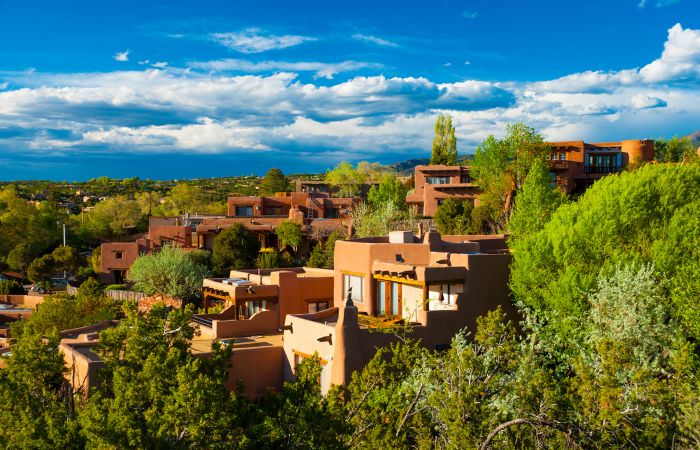 The capital of New Mexico is Santa Fe, the oldest of all the capital cities in the United States. Furthermore, it’s one of the oldest European settlements west of the Mississippi River and the first foreign capital the United States took over when establishing the country as we know it today.

Read more about what Sante Fe is known for here. 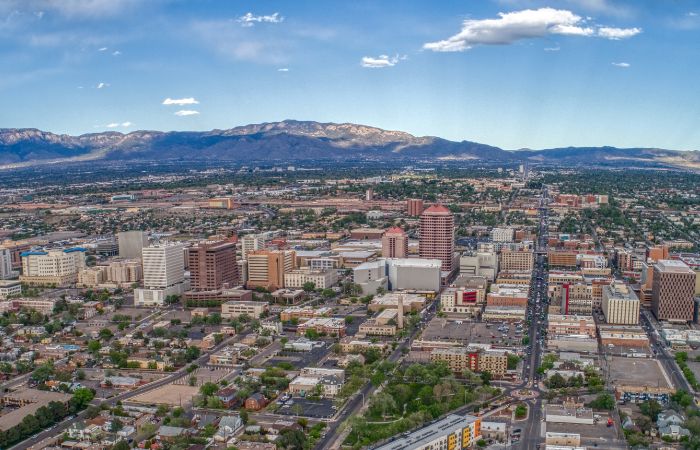 Though Santa Fe is the capital of New Mexico, the state’s largest city is Albuquerque. According to VisitAlbuquerque.org, it’s also one of “the most culturally diverse cities in the country.”

It currently has over 900 thousand residents and usually has clear, beautiful skies nearly 310 days out of the year. The city is over 300 years old, encompasses 187 square miles (484 square kilometers), with more than 150 shops and over a dozen museums. It’s also supposedly the birthplace of the breakfast burrito. (Thank you, Albuquerque!)

Check out what Albuquerque is known for here. 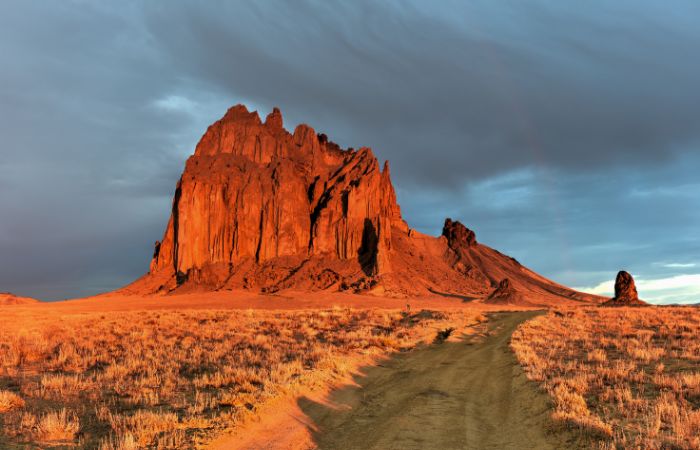 New Mexico is known as the Land of Enchantment because it always has something to fascinate everyone. It doesn’t matter if you like skiing, visiting caves, learning about ancient history, searching for UFOs, or simply eating, drinking, and being merry; New Mexico makes everyone have fun.

Every state has its own state bird, state flower, and state tree. New Mexico has all of that and more! Here are some of my favorites: 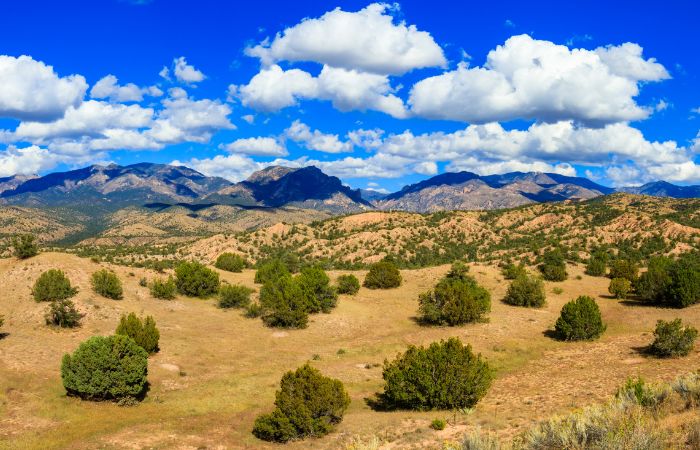 New Mexico is one of those rare states that features exciting city life, delicate greenery, snow-capped mountains, and arid deserts. There aren’t many types of land that you can’t see in New Mexico.

You can even find beaches! Of course, these beaches surround ponds, lakes, and rivers since there’s no ocean near New Mexico. There’s even one “beach” with no water anywhere around it. It’s called the White Sands National Park, and it’s gorgeous.

Despite the variety of landscapes, the climate is pretty similar no matter where in New Mexico you go.

It features a mild, primarily continental climate throughout the entire state. There’s plenty of sun, low humidity, and very little precipitation. In the hottest months of the year, temperatures average about 97°F (36.1°C), though they do sometimes exceed 100°F (37.8°C).

Mountain temperatures are comparable to those in the Rocky Mountains. They can vary between 40°F (4.4°C) and 80°F (26.7°C), depending on the specific time. Temperatures in the winter don’t often drop below the low 40s°F (~4.4°C) in non-mountainous areas but can get significantly lower on the peaks. Snow is also frequent there. 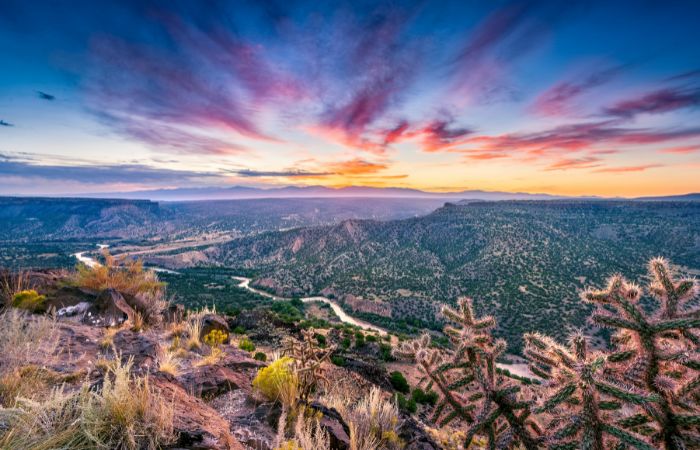 Because the Spanish were the first European people to come to New Mexico, there are strong Hispanic influences on the state’s culture. The Spanish arrived in the mid-1500s but didn’t establish a settlement until 1598.

Later, in 1706, they founded Albuquerque and named it after the Spanish Duke de Alburquerque. New Mexico is still home to many Spanish and Hispanic residents, and you can find their influence in everything from the food and music to the exquisite architecture.

Churches, missions, and other architectural structures play a big part in why people visit New Mexico today. As the Spanish settlers—and later European settlers—built lives in New Mexico, they also built churches, missions, schools, homes, and more. Many of these buildings remain today. In fact, you can visit even older structures, such as the over 1,000-year-old Taos Pueblo.

New Mexico didn’t become an official U.S. state until 1912, but its foundations were laid over 300 years earlier. In a state that old, it should come as no surprise that there’s plenty of history to explore. 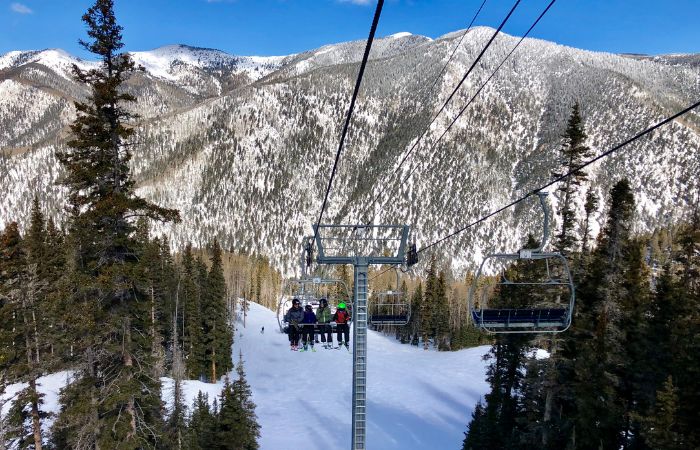 Now that we’ve talked a little about New Mexico, let’s jump right into six of the most beautiful, exciting places to visit.

This section sticks strictly to natural locations, although there may be some man-made buildings there now. We’ll discuss more modern attractions, such as Roswell, museums, and theme parks, in the next section. 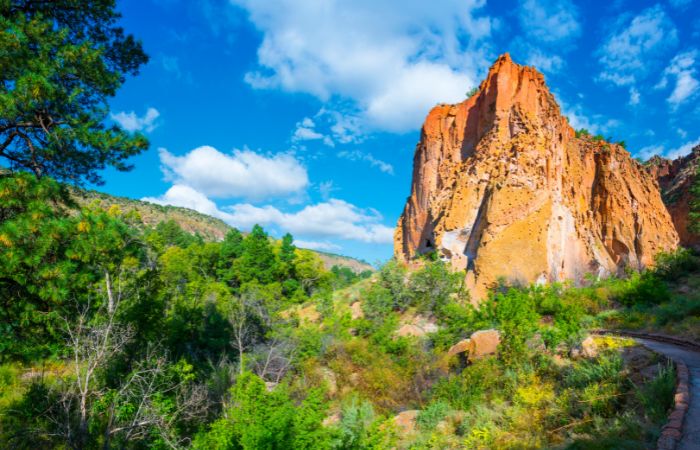 This monument dates back to 1,150 AD, and it’s a gorgeous representation of New Mexico’s desert wilderness. There are also plenty of historical buildings and remnants from the Pueblo Indians who lived there.

It’s an excellent place to experience nature and get in touch with yourself. You can hike, camp, stargaze, and enjoy the peacefulness of the large, open expanse. There are also modern conveniences available, including bathrooms, an outdoor amphitheater for concerts, and a museum. 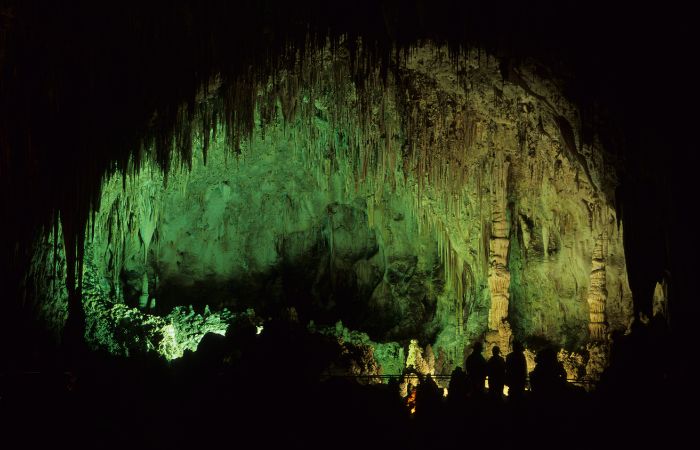 Carlsbad Caverns are a must-see for any cave or spelunking enthusiast. The seemingly endless passages twist, wind, and take you deeper and deeper into this glorious, natural underground wonder. You can schedule a tour or explore the depths on your own.

Take in the breathtaking stalactite and calcite formations, duck and dodge the numerous bats that make the caverns their home, and try not to fall into one of the messy but awesome mud pits along the way. 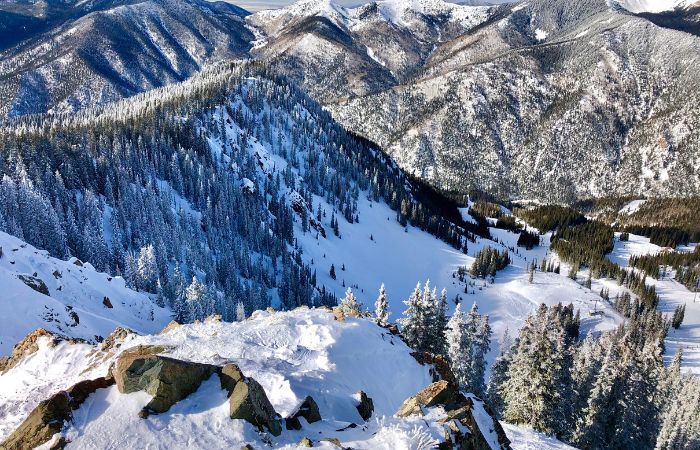 If skiing, sledding, or snowboarding are more your thing, then you’ll want to visit Taos Ski Valley. You can swim, hike, bike, fish, or even take a hot air balloon ride above the scenic mountain in the summer. In the winter months, you can grab your gear and enjoy the snow however you like best. 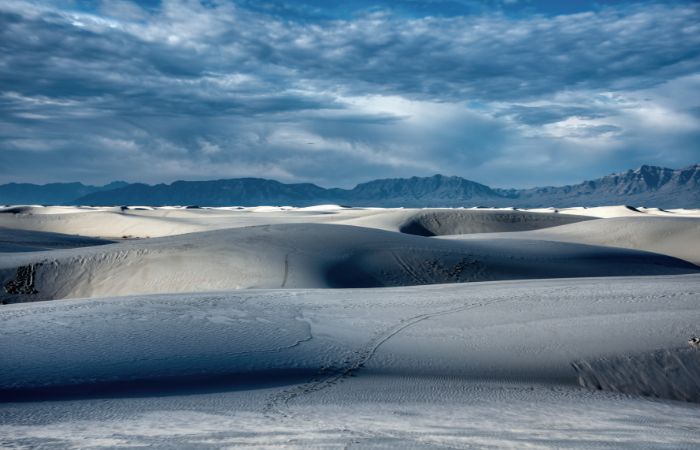 When you’re in the park, there’s nothing but unblemished white sand for as far as the eye can see. While there, you can ride horses, hike, camp, or go sledding on the dunes.

As with most on-site purchases, buying sleds from the park can be expensive, so you may want to invest in this three-pack of Flexible Flyer Saucer Sleds from Amazon.com before you go. 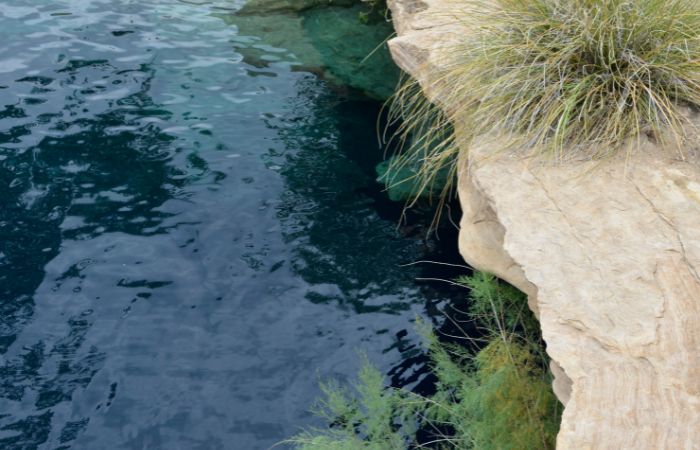 If you enjoy swimming, diving, or just gazing at beautiful bodies of water, you have to visit the Blue Hole. It’s a large, circular natural lake with waters so blue that you’ll think the city treats or dyes it. It’s over 80 feet (24.4 meters) deep and keeps a comfortable temperature all year round. 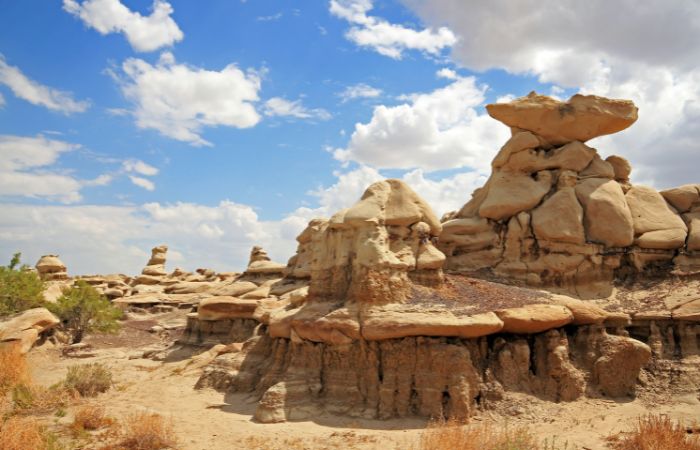 The Bisti Badlands are home to some of the most impressive, unique rock formations you’ll ever see. They look almost unreal with their mix of thin, natural spires and what’s left of man-made statues long since fallen into ruin.

While there, you can see actual petroglyphs, plenty of local wildlife, and maybe even some fossils. This isn’t a place where you’ll find museums and amphitheaters. It’s remote and natural, home to snakes and coyotes, with no human amenities in sight. It’s wonderful, but you should go in a group for safety. 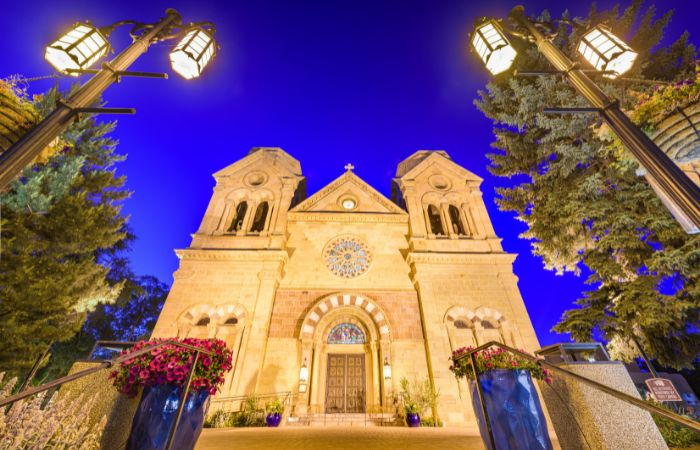 6 Fun Things To Do

In this section, I’ll tell you about six of my favorite non-natural sites to visit and things to do in New Mexico. Don’t worry, my ET-loving friends, Roswell did make the list. 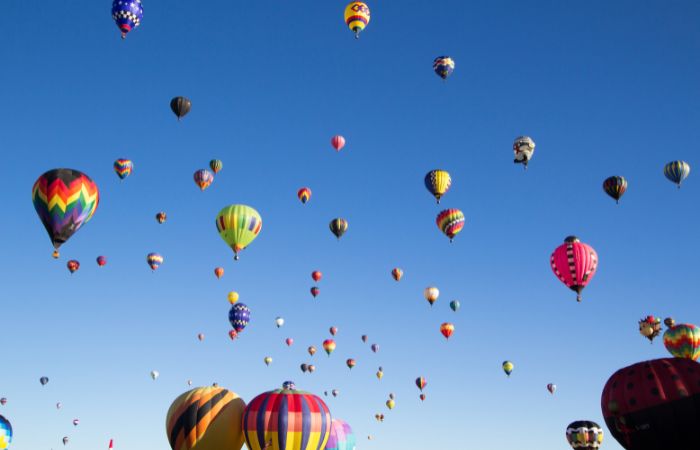 If you’re visiting New Mexico in the fall, make sure you head to Albuquerque to check out the International Balloon Fiesta. Hot air balloon enthusiasts worldwide fill the sky with hundreds of colorful balloons for this nine-day event.

While there, you can sit back and enjoy coordinated shows, music, games, balloon races, and more. There’s plenty of great food and even performances that shed light on New Mexico’s history and the indigenous populations in the area. 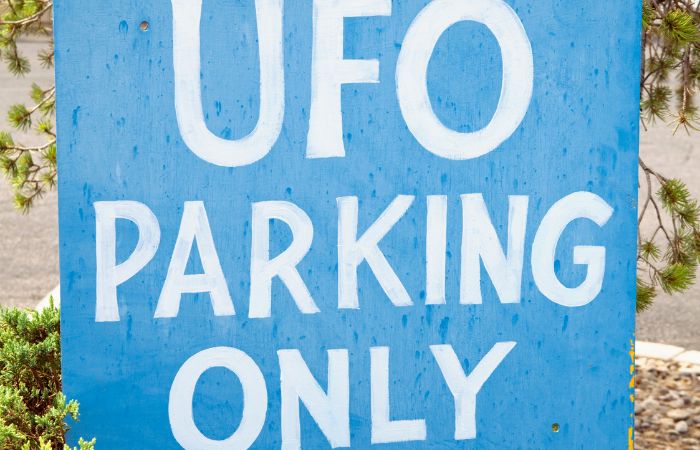 Like many of us, the founders of the International UFO Museum and Research Center in Roswell believe that “the truth is out there.” The city of Roswell needs no explanation or introduction, but the UFO Museum is something you won’t want to miss.

It’s home to meteorites, alien dissection displays, and all kinds of photos, artifacts, and records of all the most important unexplained sightings throughout history. It’s a little garish, but beneath the fun and silliness, it’s actually an excellent place for serious UFO enthusiasts to visit.

If you love art and like to be a part of things, then you’ll have a blast at one of Meow Wolf Santa Fe’s immersive art experiences. It’s a little bit beautiful, a little bit weird, and sometimes a little bit creepy, but it’s also a 100% authentic artistic experience.

It’s a beautiful playhouse that sometimes looks like a gorgeous rendition of Alice’s Wonderland and other times like something from one of Tim Burton’s most insane nightmares. Either way, it’s an all-ages experience you won’t want to miss. 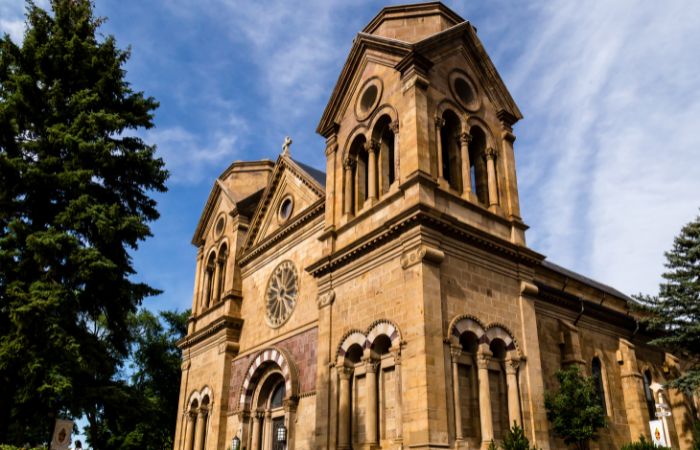 Built in 1869, this gorgeous basilica welcomes all who want to visit it. It is functional, so feel free to come for mass, confession, or other faith-based events. 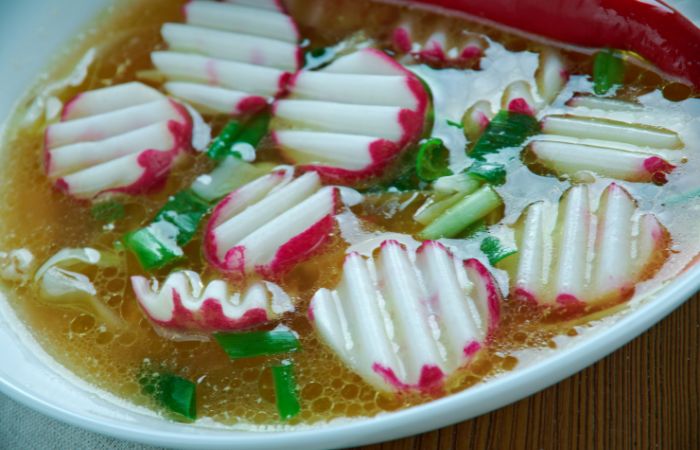 New Mexico Foods You Have To Try

If you like spicy, bold flavors with a Latin/Hispanic flair, you must experience the cuisine in New Mexico. It’s hands-down some of the tastiest food you’ll ever try. There are hundreds of restaurants, cafes, and food trucks to visit while you’re there.

Since it’s too hard to pick the best places to eat, here are some of the tastiest New Mexico foods you might want to order wherever you go:

If you have the pleasure of visiting or relocating to New Mexico, do yourself a favor; avoid the chain restaurants and opt for the local eateries instead. You won’t regret it. 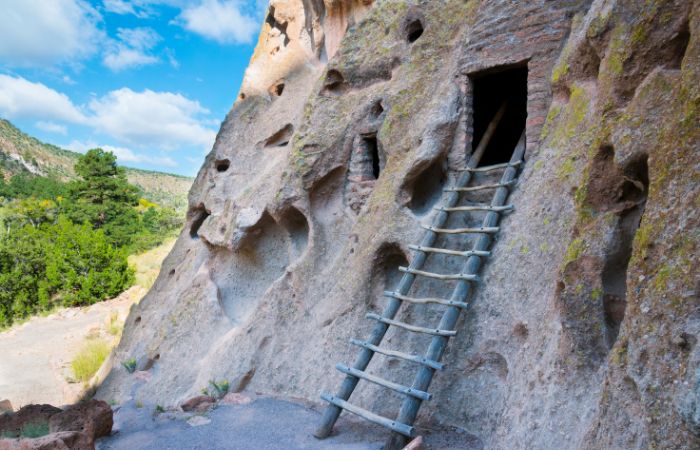 Hopefully, whatever you knew about New Mexico before reading this article, you now have a better idea of all the fantastic and diverse things you can do there. In addition to its rich history and unique extraterrestrial experiences, there’s also so much more to experience. Whatever you do, don’t shy away from trying new things and new food when you get there.

If you’re planning a trip to New Mexico be sure to check out this adventure guide here.