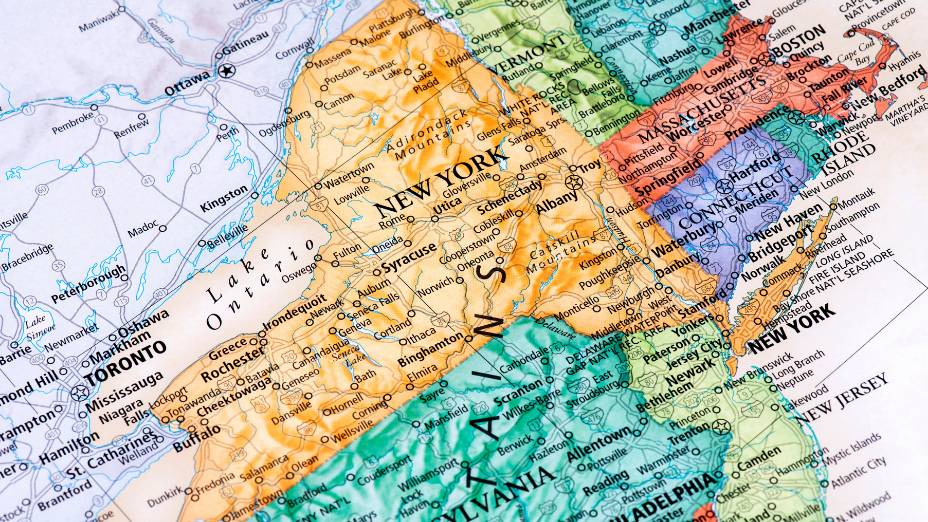 What Is the State of New York Known For?

New York City is one of the most well-known cities in the world, but the state as a whole has far more to offer than skyscrapers and Grand Central Station. From NYC’s densely populated, multicultural metropolis to Upstate New York’s historic covered bridges, New York State goes beyond what you see on television.

New York State is known for NYC, cultural diversity, and breathtaking sights like the Statue of Liberty, Niagara Falls, Adirondack Park, and historic covered bridges. The state is also famed for its diverse geography, bustling economy, high cost of living, and well-known inventions.

Read on to learn more about New York state and what it’s known for.

One of the Original 13 United Colonies

In 1776, the original 13 colonies declared independence from Great Britain and called themselves the United Colonies. By 1750 they had around 2 million people and were growing fast. The 13 colonies were New Hampshire, Massachusetts, Rhode Island, Connecticut, New York, New Jersey, Pennsylvania, Delaware, Maryland, Virginia, North Carolina, South Carolina, and Georgia. 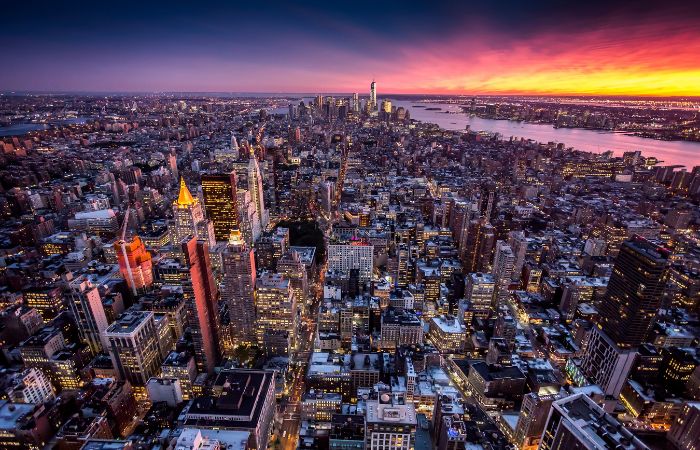 New York Is Home to the “Big Apple”

When someone mentions “New York,” all minds immediately go to New York City. It’s hard not to associate New York State with the Big Apple—NYC is even more well-known than the state’s capital of Albany. In fact, New York is often referred to as New York State to distinguish it from the famous New York City.

Known all over the world as the most densely populated city in the US, New York City boasts over 8.6 million residents (over 27,000 people per square mile). Even though New York State has vast open land, over 92% of New York’s residents live in an urban environment, mainly the NYC metropolitan area.

New York City is famous worldwide, often referred to as the “capital of the world” because it’s home to the United Nations headquarters. Additionally, NYC is considered an important international center for culture, finance, and media.

But, why is it called the “Big Apple?”

The Big Apple got its nickname in the 1920s after the city awarded large apples as prizes for racing competitions in and around New York City. In 1971, the city adopted the “Big Apple” as its nickname after it appeared in an ad campaign. Today, the term “big apple” represents the biggest and best place to be, and New York City proves time and time again that it is deserving of this moniker. 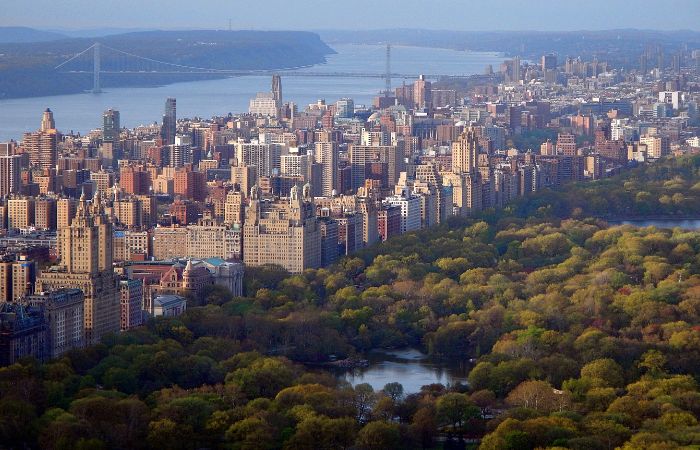 New York’s multi-ethnic population is a testament to centuries of immigration. A blend of different cultures, backgrounds, and age-old traditions seen in New York’s music, theater, dance, art, and cuisine.

As time progresses, New York’s population continues to grow increasingly more diverse. Immigrants make up a majority of the residents in most neighborhoods, especially throughout the NYC metropolitan area. Albany is home to large Irish and Italian communities (New York State has a higher number of Italians than any other state in the US).

At the same time, western New York is made up of German and Polish Americans. On the northern edge of New York, you’ll find many French Canadians.

NYC, in particular, is the most linguistically diverse city in the entire world. Over 600 languages are spoken throughout the New York City metropolitan area, including multiple dialects, with English, Spanish, and Chinese (Mandarin and Cantonese) as the top three. 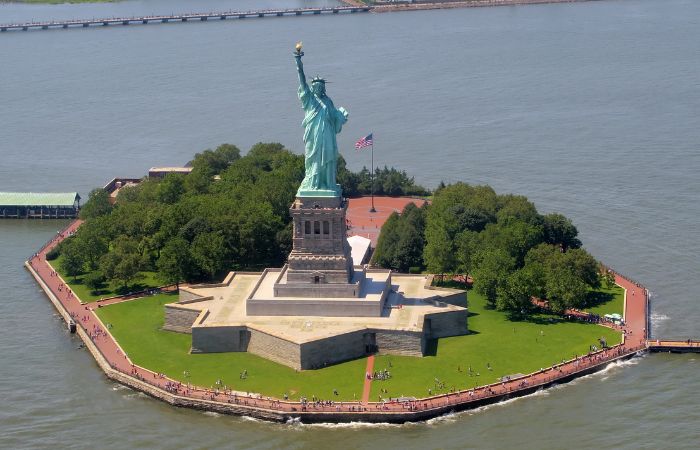 When most immigrants arrived in the United States by ship, the Statue of Liberty was the first sign of freedom for millions of travelers. As ships docked in New York Harbor, Lady Liberty greeted guests with a representation of opportunity, freedom, and democracy. The seven points on her crown symbolize the seven continents and oceans, and showcase the universal idea of liberty as a fundamental human right. 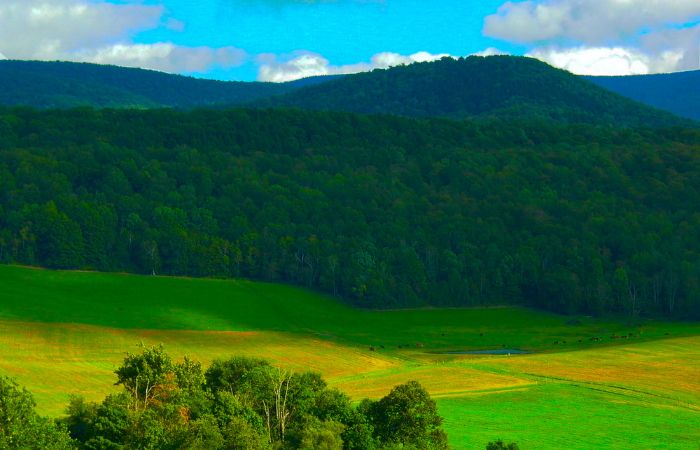 The southern part of New York is indeed a bustling urban area with heavy traffic and people galore—but the state as a whole is primarily natural landscapes. New York State is full of forests, rivers, lakes, mountains, farms, meadows, and wetlands. 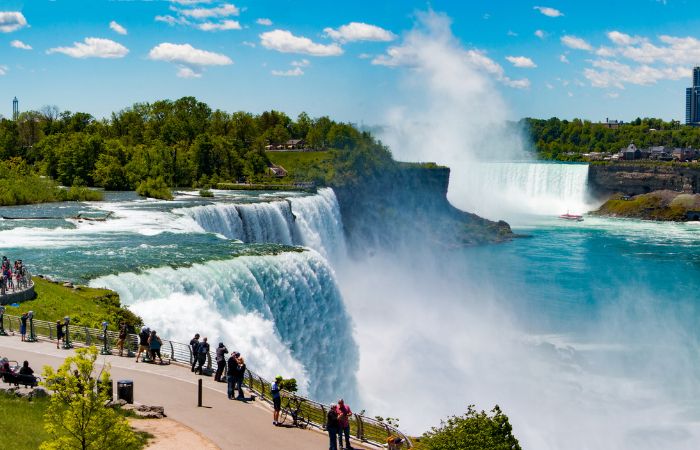 Despite most people associating New York State with the massive, densely-populated NYC, New York is also home to many breathtaking natural sights and scenery, including Niagara Falls. Niagara Falls, the oldest state park in the US, was established in 1885.

Niagara Falls sits on the edge of the western New York/Canadian border in Niagara County, New York. The three magnificent, massive waterfalls are both powerful and hypnotic. While sightseeing near Niagara Falls, you might also consider checking out the nearby nature trails and The Aquarium of Niagara. 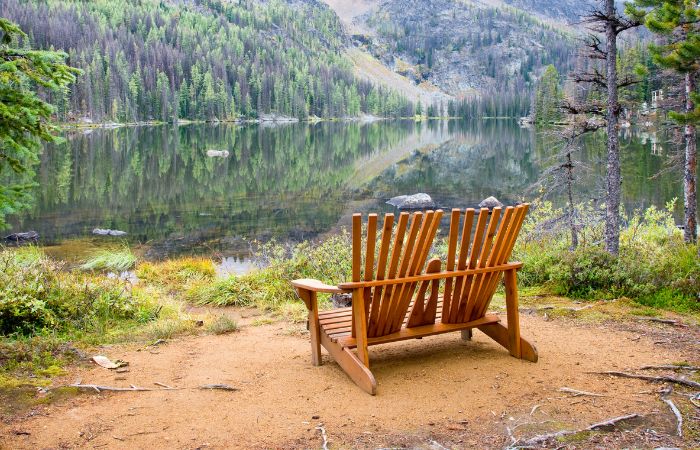 In addition to the wonder that is Niagara Falls, New York is also home to Adirondack Park. The park is massive—9,375 square miles (24281.14 cm²)—and significantly bigger than Yellowstone and Yosemite combined. Adirondack Park was established in 1892 and given protection by the constitution to remain “forever wild.”

Adirondack Park is a far cry from the bustling city life and includes over 10,000 lakes, tens of thousands of miles of rivers, and natural environments like wetlands, diverse forests, and mountains.

Interestingly, over half of the land in Adirondack Park is privately owned, including over 100 towns, villages, farms, and businesses. 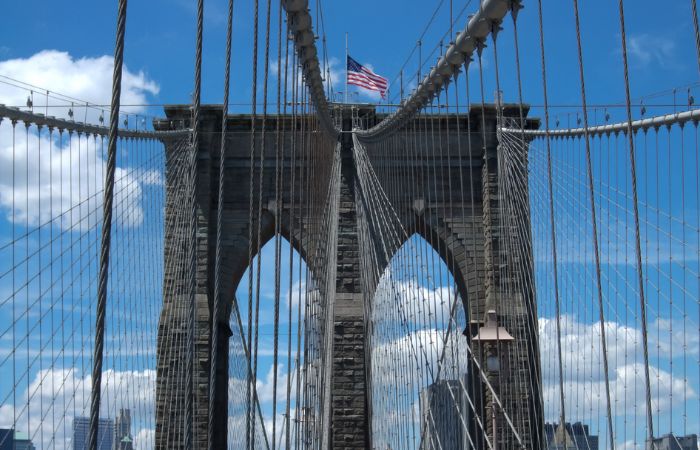 If visitors to New York take a moment and step away from the busy urban life and explore the vast landscape of the surrounding state, they’ll be transported to simpler times. Throughout the state, you’ll find old covered bridges dating back to the days of horse-drawn transportation.

Most of New York’s many covered bridges date back between 1825 and 1912. Take a road trip to visit these bridges, and on your journey, you’ll be whisked back in time to small villages, farmlands, one-room schoolhouses, and old bed & breakfasts. 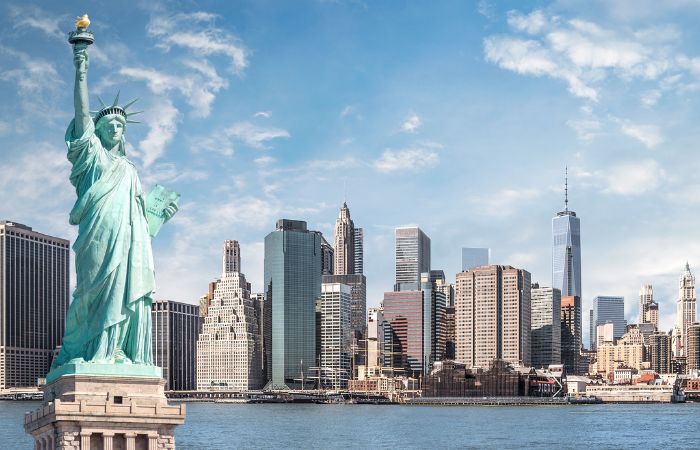 The State Contributes to 8% of the Country’s GDP

New York State is world-renowned for its worldwide economic contributions. Not only is the New York Stock Exchange located in NYC, but Wall Street is home to the largest brokerages and investment bankers in the country.

Because of New York’s population and massive industries, it contributes to 8 percent (over $1.5 trillion) of the United States Gross Domestic Product—despite making up only 1 percent of the country’s landmass. Nevertheless, the state ranks 34th for economic growth, and its most financially successful industries are finance, business, transportation, trade, and utilities. 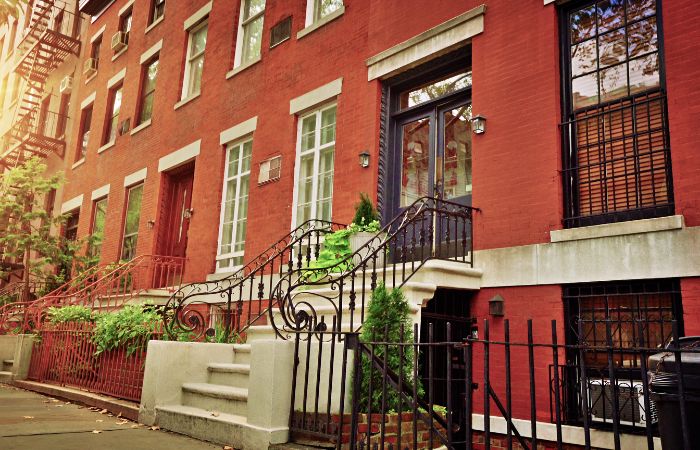 It’s Infamous for Its High Cost of Living

New York makes the top ten list of states with the highest cost of living every year—the state is infamous for its housing, transportation, and food prices. In addition, New York has a high tax rate which contributes to the yearly expenses of its residents. Costs increase the closer you live to NYC.

The most significant expense for New Yorkers is housing costs. The average home value is around $331,459, nearly $100,000 more than the national average. Homes near the NYC metropolitan area go for even more. For instance, the average home price in New York City is over $600,000!

Rent prices are equally expensive and significantly higher than the national average. In Manhattan, you can find a studio apartment for around $3,700. Head north and prices drop. In Albany, you can get a better deal of approximately $1,300 per month.

Utilities are also high in New York, coming in at nearly $500 per month for electricity, gas, Internet, cable, and water.

Owning a vehicle in New York will set you back around $400 per month for car-related expenses—and that’s not including a car payment. If you’re making payments on your vehicles, your average car payment could total around $540.

If you live in an area of New York that offers public transportation, you can save a little bit of cash. The subway is still cheaper than owning a vehicle and costs around $120 per month. New York’s transportation costs—including fuel, repairs, insurance, and subway fare—are 40% higher than the national average. 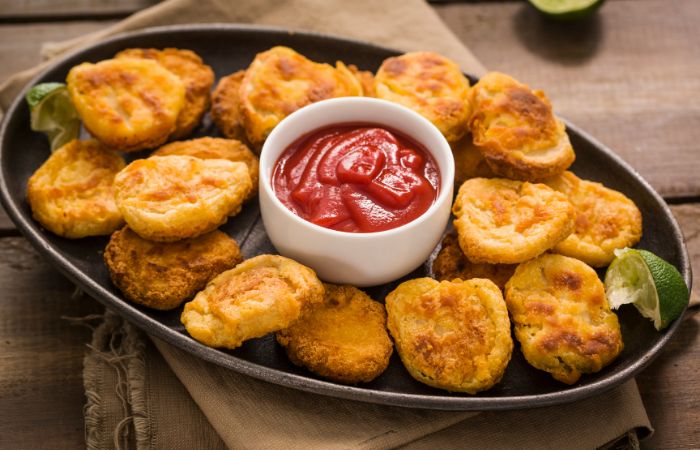 In the United States, a single-person household spends around $2,800 on groceries per year—and that’s on the low end. In New York, however, grocery prices are significantly higher, especially in urban areas.

Food costs vary widely throughout New York. For example, in NYC, a loaf of bread costs around $4.30. Head north about 250 miles to Syracuse, and the price is around $2.20. These massive price differences are prevalent throughout the state.

If you’re into restaurant outings, then your food costs will inflate even more. New Yorkers spend nearly $4,000 per year eating out—the third-highest amount in the United States. 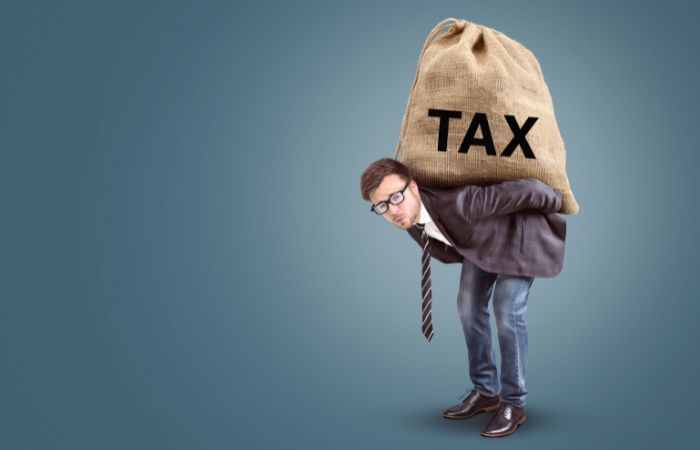 New York has one of the highest tax rates in the nation, from income tax to sales tax. The income tax rate is nearly 9 percent—8.82 percent, to be exact. Sales tax is 4 percent, but many counties charge additional tax on top of it. So in some areas, New Yorkers pay upwards of 8 percent in sales tax. Property taxes are high, too, coming in over $3,700 per year, nearly $2,000 more than the national average. 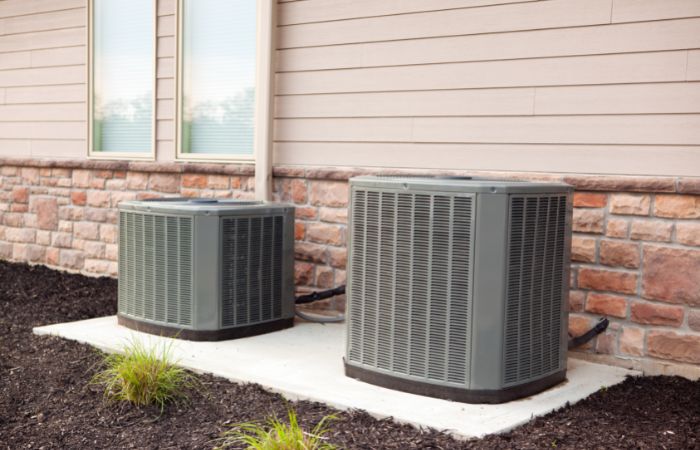 Many Well-Known Items Were Invented in New York

New York State is where many famous entertainers got their start, and it’s also home to many brilliant minds. Dozens of inventions—including some of our favorite things—were invented in the Empire State. 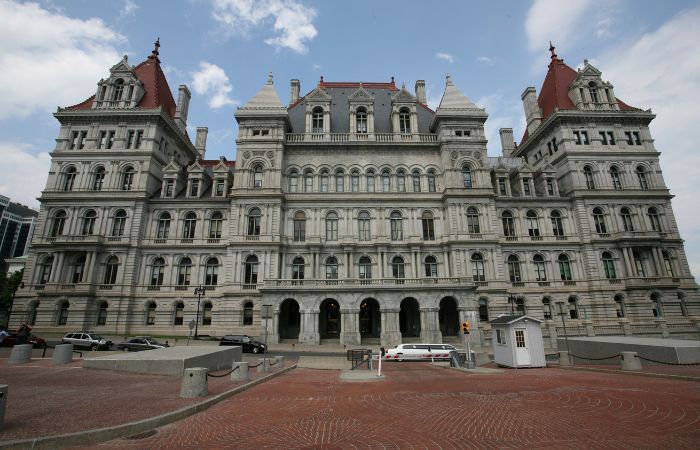 Most people know a great deal about New York City, but the Empire State as a whole has its own quirks, perks, and hidden gems. Even outside of the bustling urban metropolis, New York has something for everyone.

Its diverse geography and natural landscapes make it an ideal tourist attraction for nature lovers. In addition, the rich history and cultural diversity make it a premium destination for history buffs, and those interested in economics will enjoy visiting the “finance hub of the world.”

If you’re planning a trip to the state of New York be sure to check out this guide with all the best day trips in the area!