Top 18 Things Nice, France is Known For & Famous For 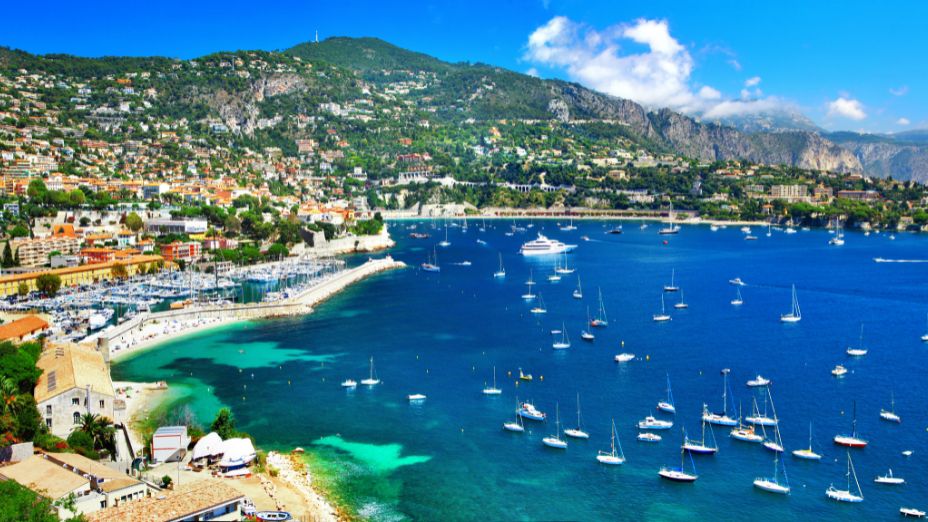 What Is Nice, France Known For

Nice (pronounced “niece”) is a seaport city on the southern coast of France. This popular tourist destination is located at the foot of the Alps near the French-Italian border. The city has a rich history with Italy and other Mediterranean countries, making it unique among French metropolises.

Nice, France is known for its beautiful location on the French Riviera. The French culture and Mediterranean climate have made Nice a popular tourist destination for hundreds of years. The city is also famous for its yearly festival and parades, the Carnival de Nice.

If you want to know more about what makes Nice, France special, keep reading. This guide will explore why Nice has been attracting tourists for centuries, and we’ll look at how Nice is remarkably different from other cities in France. 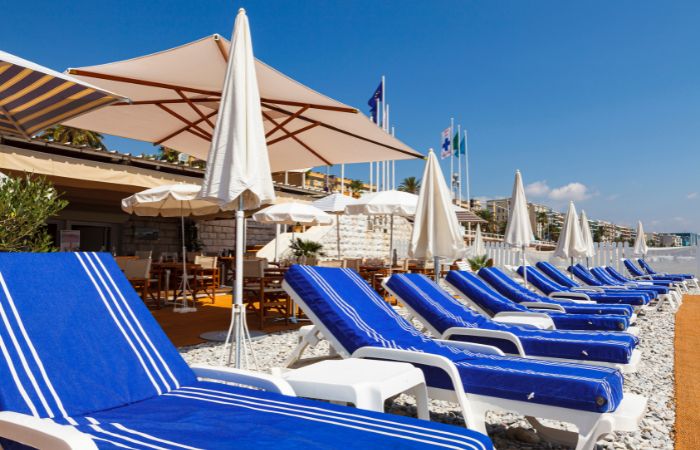 Nice, France Has the Perfect Location for Tourism

Nice is located in an area known as the French Riviera, also called the Azure Coast. The French Riviera can be found on the southeast coast of France, along the Mediterranean Sea and extending into neighboring Italy.

The area is renowned for its temperate climate, especially in the winter.

The Alps to the north of Nice block most seasonal wind from reaching the coast. The city has hot, dry summers and mild, wet winters. In some summers, wind currents even keep the sea at a refreshingly cool temperature.

From a climate perspective, Nice resembles Northern Italy more than it does the rest of France. 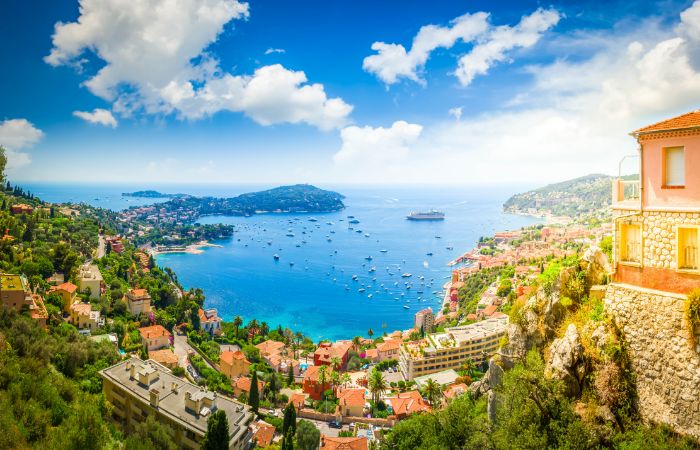 As early as the 1700s, wealthy Europeans visited Nice during the winters to escape the cold weather. The English, in particular, favored Nice for its climate and visited to avoid England’s cold, damp winters.

Nice continued to grow in popularity with the English nobility. By the end of the 19th century, it was Queen Victoria’s favorite place to spend her winters. She spent most of March and April in Nice from 1896 to 1899.

Victoria loved her visits to Nice. Though she never recovered from her husband Albert’s death, Nice made the Queen more lively and cheerful. It is rumored that on her deathbed in 1901, Victoria said, “If only I were at Nice, I would recover.”

The clear skies, salt air, and azure waters attracted many other nobles. Other royals who spent time in Nice include: 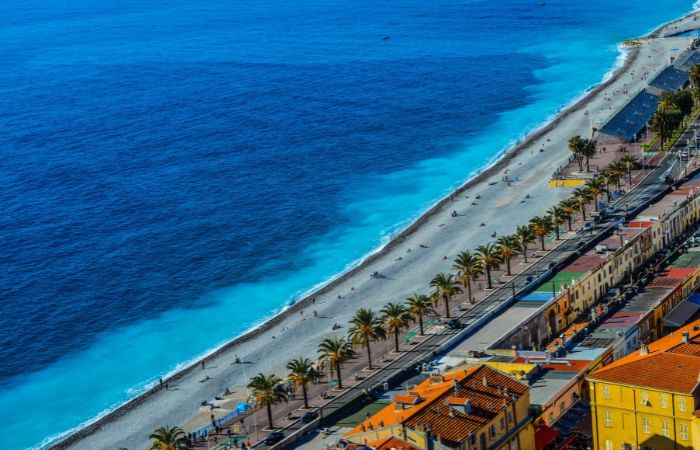 The city of Nice built a boardwalk along the beach and named it after the Englishmen who popularized this coastal getaway. The Promenade des Anglais, or “English Walkway,” stretches for 4 miles (6.44 km) and offers beautiful views of the sea.

With its palm trees and uninterrupted seaside view, this boardwalk is one of the most iconic attractions Nice has to offer.

The Promenade des Anglais made international headlines in 2016 when tragedy struck. A truck driver killed over 80 people on the Promenade when he drove his vehicle through a crowd celebrating Bastille Day.

The driver continued for over a mile (1.6 km) down the boardwalk, injuring hundreds. This horrific event is considered an act of terrorism against France. 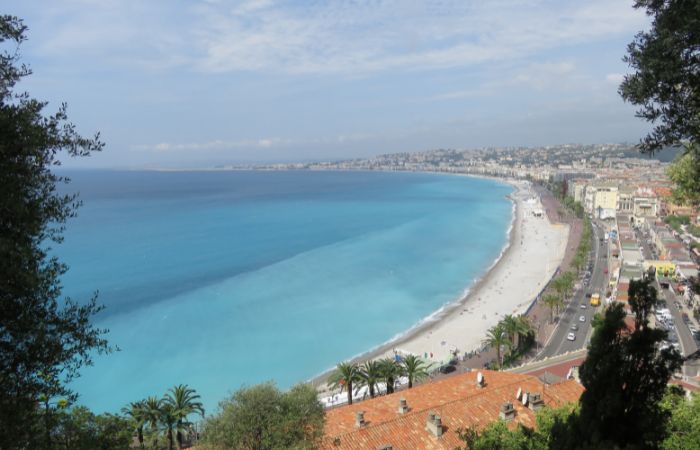 Beaches on the Azure Coast

There are 20 public beaches along the coast, with several private beaches interspersed. The shores are pebbly, and it’s best to wear shoes when walking on them. You can enjoy the same salt air and beautiful blue sky and sea that attracted royalty to Nice over a hundred years before.

The popularity of Nice’s beaches earned the city the distinction of being a UNESCO World Heritage Site in 2021. Nice was named “the winter resort town of the Riviera” in honor of its famously mild winters.

Nice Has Been Home to Many Famous Artists

Royals aren’t the only ones who have flocked to Nice for its gorgeous views. Many artists also spent time there, and the influence is apparent in their work. Artists who lived in Nice include Henri Matisse, Marc Chagall, and Arman.

Writers Friedrich Nietzche and Anton Chekov also spent time in Nice and finished writing some of their pieces there.

Nice now has several art museums to commemorate the artists who lived there.

Let’s take a look at some of the museums that you can visit in Nice with works by famous painters.

This museum was originally named for Jules Chéret, who lived out his retirement in Nice.

Chéret is best known for his posters and advertisements, though he produced paintings, as well. You can find Chéret’s work at this museum, along with art by Rodin, Picasso, Pierre Bonnard, and many others.

The Marc Chagall National Museum contains many of Chagall’s religious-inspired works. The museum opened while Chagall was still alive, and he contributed to the collection until his death.

The main exhibit at this museum is Chagall’s “Biblical Message” series, which illustrates passages from Genesis, Exodus, and the Song of Solomon. The museum has hundreds of Chagall’s works across all kinds of media. 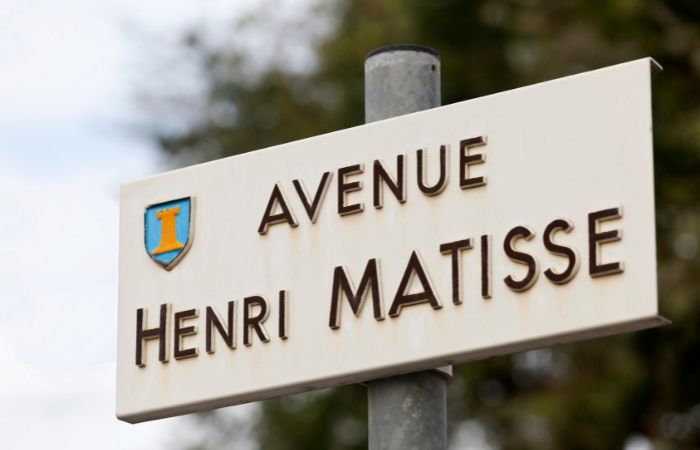 Musée Matisse is a museum dedicated to the works of Henri Matisse, who lived in Nice for several decades. He is one of the most famous French painters of the twentieth century, and the museum holds hundreds of his paintings, drawings, and sculptures.

Matisse first came to Nice in hopes of treating his bronchitis.

He fell in love with the lighting and temperate weather, and he decided to permanently move from his home in the north. Matisse lived in Nice until he died in 1954.

Located on the Promenade des Anglais, the Musée Masséna displays art and architecture from the Belle Epoque, or Beautiful Era, of French history. This era lasted from the 1870s until the start of World War I. The building itself is a work of art.

It contains paintings, furniture, jewelry, and other artifacts that tell the history of Nice. 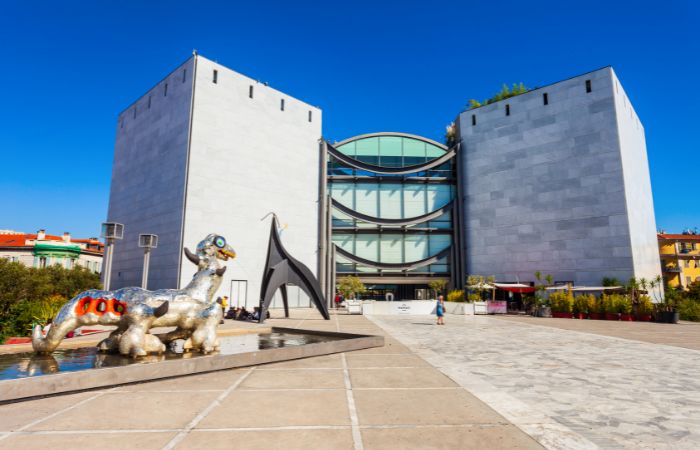 This museum shines a light on “naive” art, art created by artists with no formal training. This style is sometimes called “primitivism,” as its practitioners are uninfluenced by convention or tradition.

One of the most famous naive artists is Henri Rousseau, whose work can be found at this museum.

If you’re interested in visiting any of these museums during your trip to Nice, consider purchasing a Nice Museum Pass. This pass will give you entry to all municipal museums in Nice and lasts for 72 hours. That gives you time to check out all of the museums listed here and more. 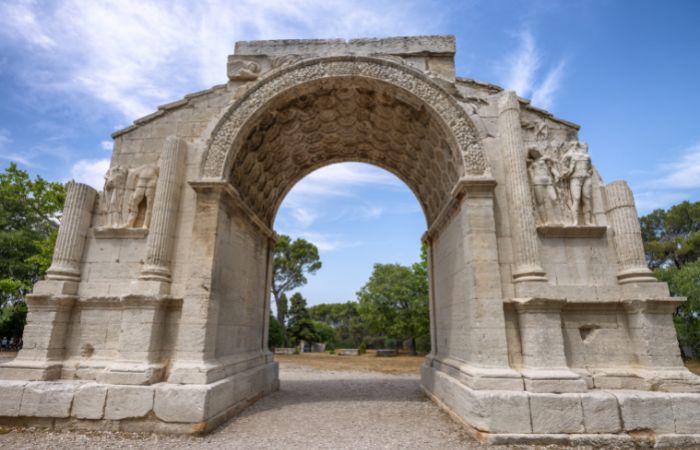 Nice’s history extends far earlier than the 18th century. Scholars think Nice began as a Greek settlement called Nikaia, after the victory goddess Nike. But most of our archeological evidence comes from the Romans several centuries later.

The Nice neighborhood of Cimiez (pronounced “sim-yay”) is built around the ruins of a Roman city. The Romans used Nice as a hub of trade from the first century until around the tenth century.

Today, you can view the ruins to better understand what life was like for the ancient Romans.

The Cimiez ruins include a 5,000-person theater, an arena, a public bathhouse, public latrines, and special rooms that were kept hot or cold. Nice has a museum dedicated to these ruins, with models of what the buildings once looked like.

The museum also includes smaller artifacts found at the Cimiez archeological site, such as jewelry and coins.

The amphitheater has remained uncovered since its founding. Up until 2011, people in Nice still used it to host public events, such as the Nice Jazz Festival. That means the amphitheater was in use for almost 2,000 years! 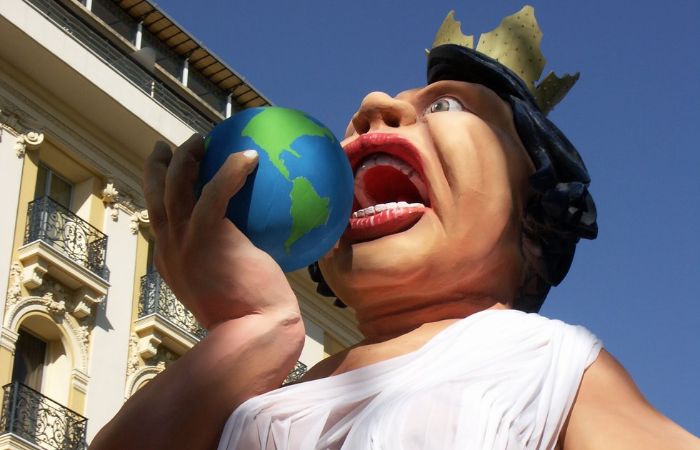 Most people associate Carnival with Rio de Janeiro or New Orleans, but there is a major Carnival celebration in Nice every year, too. Carnival originated as a celebration before Lent, a period of fasting and penance leading up to Easter.

The Nice Carnival officially started in 1873 and has occurred almost every year since. It was only canceled due to major wars and the recent global pandemic. Some records suggest that people have been celebrating Carnival in Nice as early as the 1200s.

Hundreds of thousands of visitors flock to Nice every year to take part in this two-week festival. Parades run during the day and at night, featuring flowers, lights, and papier-mache floats.

Political satire is a major theme of Carnival. A mock “king” presides over the festival in the form of a parade float. This “king” was a straw puppet in early carnivals, but now he is a giant papier-mache figure. At the end of the celebration, the king’s effigy is burned.

Parade floats are elaborately decorated to follow a theme.

For example, the 2020 Carnival was “The King of Fashion,” while the upcoming 2022 Carnival will be “The King of Animals.” Floats are often beautiful, provocative, and politically relevant.

Some of Nice’s parades are known as “flower battles.” These parades feature floats covered in flowers, and the riders throw flowers to the public. Since 80% of the flowers are grown locally, the parades display Nice’s natural and diverse beauty.

The final attraction of the Nice Carnival is the Parade of Lights. In this nighttime event, parade floats put on a light show set to music.

You have to pay to attend the parades in Nice. There is reserved seating and a standing-only area. Head-to-toe costumes are encouraged for all attendees. If you need to know what to expect, check out their full list of rules surrounding Carnival. 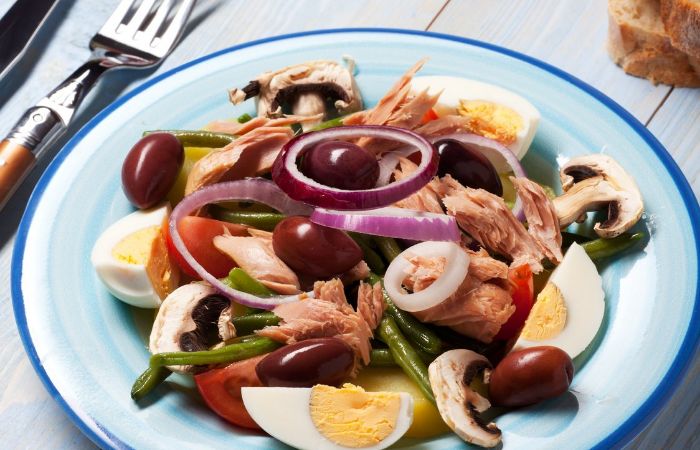 Nice Has a Unique Cuisine

The food in Nice is a blend of French, Italian, and Mediterranean cuisines.

Here are some must-try foods in Nice: 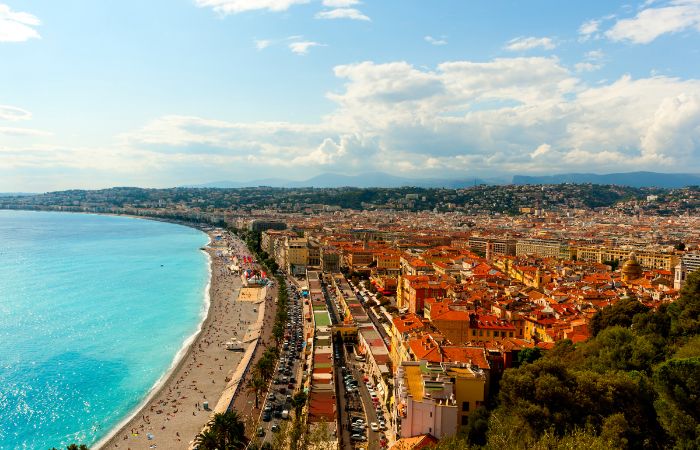 Nice’s temperate, coastal location has made it a popular destination for centuries.

From the ancient Romans who used the city as a bustling center for trade to the English Royals who escaped the cold winters, people of all backgrounds love Nice’s location.

If you plan to visit Nice, be sure to spend time on the beach that once enlivened Queen Victoria and admire the artwork at the city’s many museums. Consider booking your stay around Carnival, so you can experience one of the world’s biggest parties.

See for yourself what has made Nice such a famous tourist destination for years.

If you are planning a trip to Nice be sure to check out Hostel World here for the best rates on accommodation and for more to do and see check out Rick Steve’s Snapshot Guide here.