12 Cool Things Norfolk is Known For 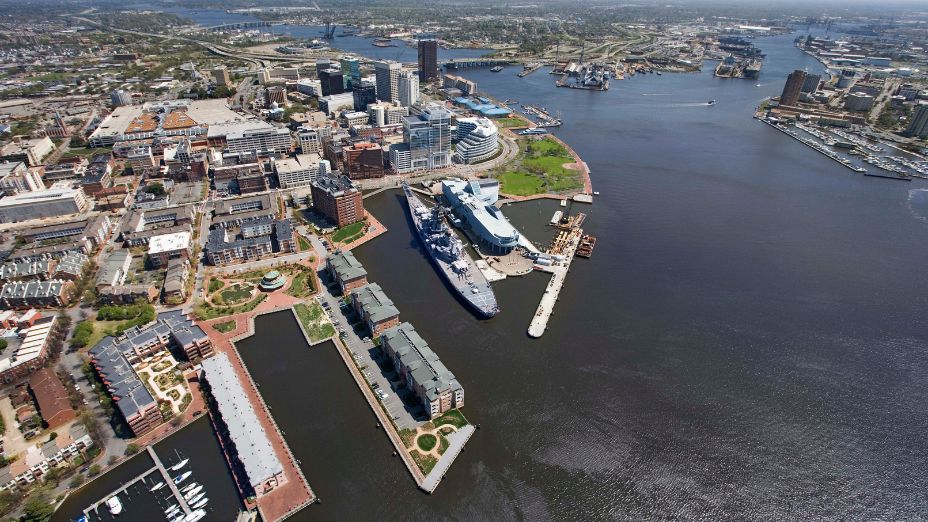 What Is Norfolk, Virginia Known For?

Many know the East Coast for its variety of sprawling metropolises, all the way from Boston down to Miami. What many don’t know is the hidden treasure that’s the waterfront city of Norfolk, Virginia.

This article will discuss interesting facts about Norfolk, the Naval Station Norfolk, and NATO’s North American headquarters. I’ll also share with you some Norfolk gems you should explore upon your visit to the city. 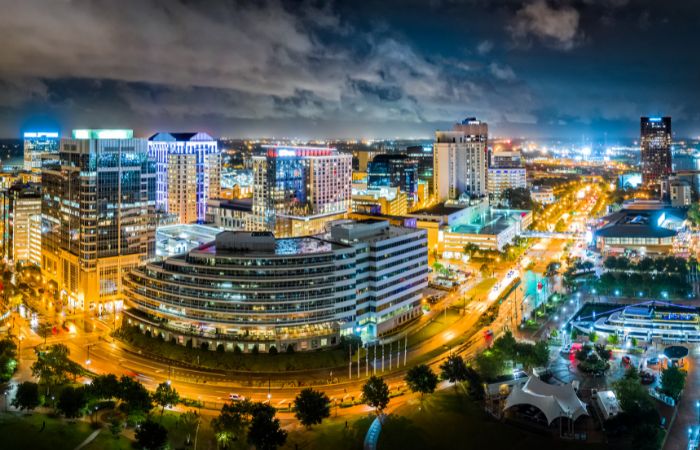 Norfolk Was Once Occupied by the Chesapeake Tribe

Long before colonizers arrived, the modern area of Norfolk was occupied and cultivated by the Chesepian, or Chesapeake, Native American tribe. Chesepiooc is Algonquian for “at a big river.”

Settlers didn’t arrive in Norfolk until the early 1600s. There, colonizers recognized its value as a convenient port city. It then became a crucial trade outlet. Around this time, Norfolk was given its name after Norfolk county, England.

During the Revolutionary War, militiamen burned down nearly all of Norfolk to prevent its use by the British. It re-found prosperity once it was connected to a railroad system in the mid-1800s.

Norfolk thrived after that as a trading port for coal, tobacco, and other food products, in addition to housing a booming shipbuilding industry. 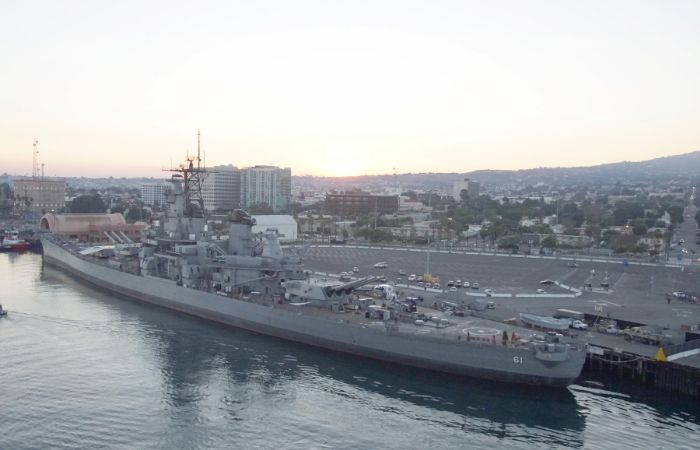 The Naval Station in Norfolk Was Built During WW1

The U.S. Navy began to develop a base near Norfolk’s ports at the start of World War I.

Its location on the Chesapeake Bay is advantageous. By 1918, 34,000 enlisted men lived and worked on the base. However, the military didn’t initially invest many resources into the base.

World War II saw the need for an expansion of military services. The base at Norfolk was no different.

It got a makeover: the Navy built new facilities, ramps for seaplanes, and runways for aircraft. At this point, it was dubbed the Naval Air Station.

In 1986, the U.S. government chose the Naval Air Station to be the Recovery Control Center Atlantic. The station was responsible for providing communications and ships to recover the parts of Apollo 7 that fell back down to Earth.

The Naval Air Station was renamed Naval Station Norfolk in 1999.

If you find yourself in the Norfolk area, be sure to take a tour of Naval Station Norfolk.

If you’re looking for a deep dive into Norfolk’s history you have to check out this book on Amazon. 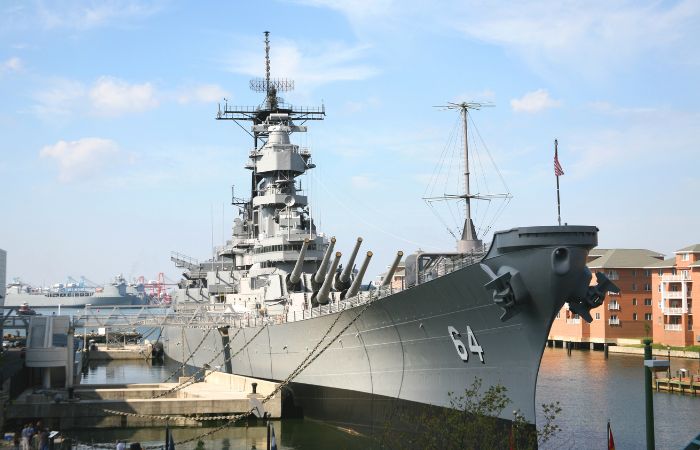 If you didn’t know, NATO, or the North Atlantic Treaty Organization, is a military alliance between 28 European countries, the U.S., and Canada.

NATO is essentially an expansion on the Treaty of Dunkirk, a defensive alliance between France and the United Kingdom in preparation for an attack from Germany post-WWII. The U.S. entered NATO in 1949.

Norfolk being home to NATO’s North American headquarters proves significant. If any of the member countries experience conflict on Atlantic waters near North America’s coast, then the U.S. and Canada are expected to respond with most communications originating from Norfolk.

NATO’s official headquarters are located in Belgium. From these two vantage points, NATO has responded to hostilities with Kosovo, Afghanistan, and Libya, among others.

While you can’t tour NATO’s North American headquarters, its Norfolk location does hold an annual Norfolk NATO Fest. According to its website, this festival is the only one of its kind which “honors the NATO Alliance and its member nations.”

The festival includes educational sessions and an “international village,” where visitors can explore international art and culture. If you’re itching to attend the Norfolk NATO Fest, it’s usually held in June of each year. 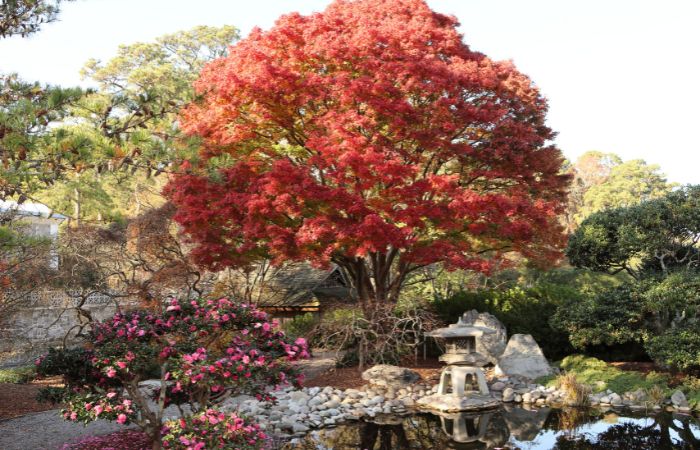 While the Norfolk Naval Station and NATO’s North American headquarters put Norfolk on the map, the charming town still has plenty of other attractions to explore and enjoy.

From scenic beaches to botanical gardens, zoos, and rich museums, one attraction is bound to catch your eye. Continue reading to learn about these standouts.

Visit the Chrysler Museum for Some Fine Arts

Do you consider yourself a patron of the fine arts? You’re in luck; Norfolk boasts The Chrysler Museum.

This impressive institution features artworks from some of history’s greatest creators, such as Auguste Rodin, Georges Rouault, and Henri Matisse, among others.

If the name Chrysler brings an automobile mogul to mind, it’s no coincidence. The son of Walter Chrysler of Fiat Chrysler automobiles donated his extensive art collection to the museum in 1971.

Fun fact: Walter Chrysler Jr.’s wife, Jean, was a native of Norfolk! No wonder they chose to donate their collection to a Norfolk treasure.

The museum is definitely worth a visit if you find yourself in Norfolk. Besides its outstanding works of art, the museum also offers free admission at all times.

During your museum visit, be sure to drop by the Perry Glass Studio, which offers glassmaking demonstrations almost daily.

The museum also provides guided tours if booked in advance. If you’re looking to be enchanted by centuries of global art, the Chrysler Museum is the perfect Norfolk attraction for you. 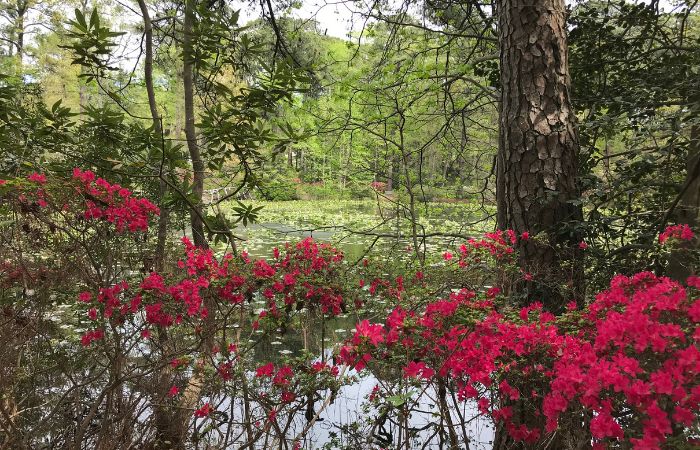 Take a Stroll Through the Norfolk Botanical Garden

After feasting on the sights of beautiful art, entertain your olfactory senses by strolling through the Norfolk Botanical Garden.

The Norfolk Botanical Garden has the honored title of being Virginia’s most extensive botanical garden. This accolade is especially impressive considering that renewable energy completely powers the garden.

The garden brags over 60 different gardens with rotating gardens through the seasons depending on what flora is in bloom. Some gardens include a variety of blooming flowers, while others showcase a specific type of plant.

The Norfolk Botanical Garden maintains a butterfly house for visitors, especially insect lovers, to walk through and enjoy. It flaunts more than 50 different species of butterflies native to Virginia and is surrounded by an additional 2.5 acres (1 hectare) of butterfly gardens.

While meandering through the gardens, you might notice art installations peppered throughout the grounds. The garden displays majestic statues as well as statement pieces made out of recycled materials.

Interestingly, the garden’s art collection includes Moses Ezekiel statues. This statue series depicts the likeness of notable historical figures, such as Leonardo da Vinci, Michelangelo, and Rembrandt, among others.

The garden is open daily from 9 a.m. – 7 p.m., except on holidays. You can purchase your admission ticket online.

You can also learn more about the Botanical Garden and it’s history here. 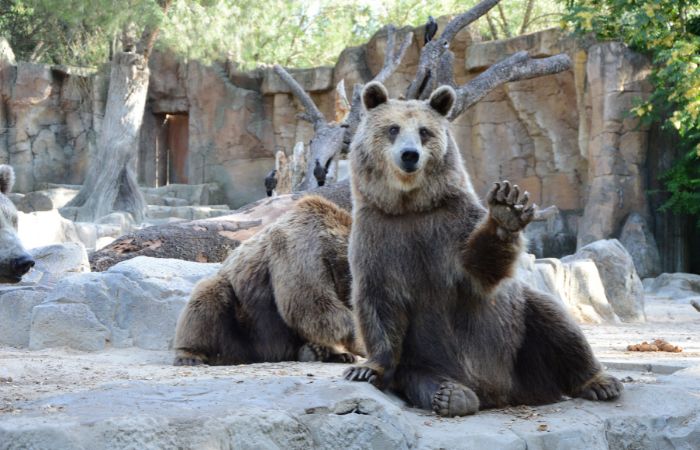 See Over 150 Animal Species at the Virginia Zoo

Norfolk offers something for animal lovers at the Virginia Zoo. The zoo exhibits animals from all regions, including the Americas, Asia, and Africa.

It represents over 150 species, including endangered species such as the Bornean orangutan, the red panda, and Malayan tigers. Fortunately, your visit can contribute to these species’ conservation through the Virginia Zoo’s conservation fund.

The zoo also holds zoo science classes and sustainability workshops. If you’re passionate about these topics, you should certainly engage with these activities during your visit.

Don’t worry if you tire of walking the zoo’s expansive grounds. You can hop on the Norfolk Southern Express in the Zoo Plaza for a fun locomotive tour around the zoo! It only costs $2 to ride.

During the summer, the zoo occasionally holds “Late ‘til 8” visits. After 5 p.m., the zoo only opens to adults, and visitors can find beer, wine, and other spirits available for purchase.

The zoo currently operates under limited capacity, so be sure to make your reservation online if you would like to visit. 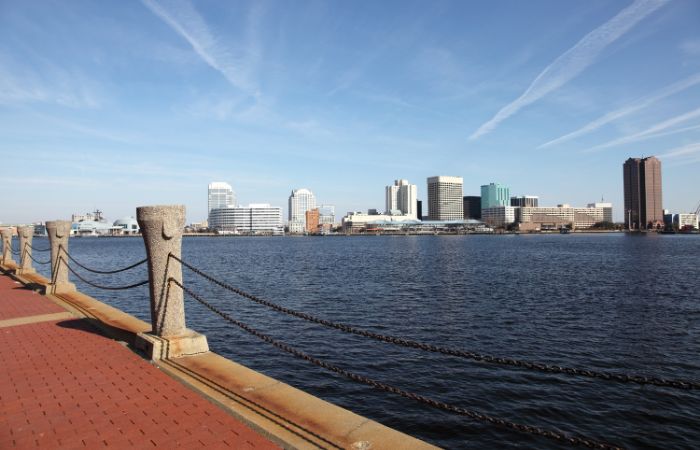 Ocean View Beach boasts over 7 miles (11.27 km) of calm, protected coastline. It’s Norfolk’s premier beachfront destination and is much quieter than its nearby neighbor Virginia Beach.

Many visit the beach to enjoy fishing, kayaking, crabbing, and sailing. It accommodates multiple beachside parks that visitors can use for picnics or grilling. Occasionally, these communities host live music festivals.

In July and August, Ocean View Beach Park offers different themed parties and movie nights for families to enjoy. These events present an excellent opportunity to enjoy views of the Atlantic Ocean while meshing with the local community. 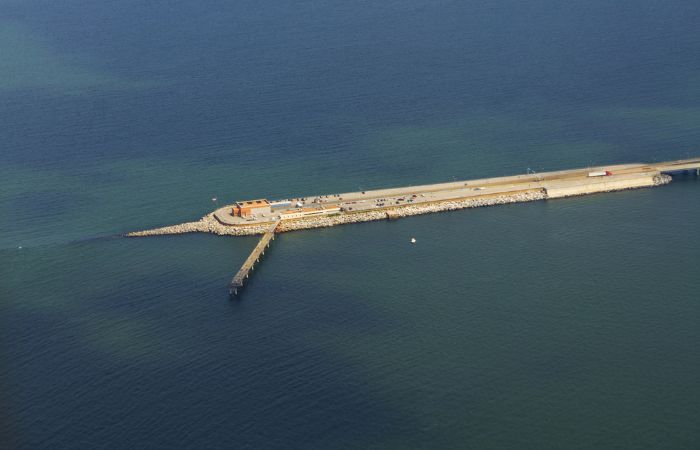 If you’re traveling to Maryland from Norfolk, then you’ll certainly cross the Chesapeake Bay Bridge-Tunnel.

This iconic landmark is only 20 minutes drive north from Norfolk. It spans the scenic Chesapeake Bay for 17 miles (27 km) to provide maximum road trip enjoyment.

In 1965, the bridge-tunnel was named “One of Seven Engineering Wonders of the Modern World.” That same year, the structure was given the Outstanding Engineering Achievement Award by the American Society of Civil Engineering.

This remarkable tunnel periodically dips below and above the bay for nearly 20 minutes’ worth of driving time. It can certainly be a fun sight for kids to see.

If your primary goal for visiting Norfolk is to tour its rich nautical history, there are additional attractions that you can take advantage of.

Nauticus, or the National Maritime Center, is a maritime museum found on Norfolk’s beautiful waterfront. It dedicates itself to STEM education that excites children about working in maritime technology.

The museum offers various interactive learning exhibits, including a submarine technology exhibit, a climate exhibit, and even a shark encounter.

The museum’s complex also hosts Virginia’s only cruise terminal. Ships from this port sail to Bermuda and the Caribbean, all the way to the Arctic!

While you’re visiting Nauticus, you may want to check out its sailing academy, Sail Nauticus. Sail Nauticus pledges itself to provide sailing lessons to underserved students in the Norfolk area.

Nauticus Is the Home of the Battleship Wisconsin

Most Virginians know Nauticus as being home to the Battleship Wisconsin, which is one of the largest and most recent ships built by the U.S. Navy.

The ship defended the U.S. against Japanese battleships in the Pacific Ocean during World War II. During this time, the ship was almost destroyed when it got caught in Typhoon Cobra. The typhoon sadly cost 790 men their lives.

Wisconsin was also utilized during the Korean War and most recently served in Operation Desert Storm during 1991.

After Operation Desert Storm, the U.S. began to realize the absence of a primary threat to its homeland security. Thus, budgets dedicated to maintaining battleships were drastically cut, and Wisconsin was decommissioned.

In 2001, the ship was brought to what is now known as the Nauticus museum for public education and exhibition. Today, the price of admission to Nauticus includes tours of the Battleship Wisconsin.

During the tour, you can appreciate the ship’s nine naval guns, anti-aircraft guns, and transverse bulkhead armor. Its streamlined body was designed to make Wisconsin one of the fastest battleships of its time. 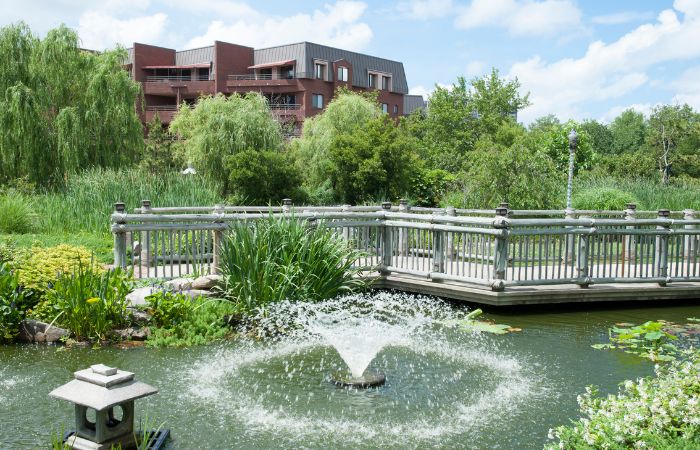 Ultimately, Norfolk, Virginia, is most known for being home to the world’s largest naval base as well as NATO’s North American headquarters.

Regardless, this shouldn’t stop you from exploring all the local culture and attractions that Norfolk offers, should you be in the area.

Here’s a refresher of popular Norfolk attractions and activities:

If you’re planning a trip to Norfolk be sure to check out this Insider’s Guide here on Amazon.