Top 21 Things Oregon is Known For & Famous For 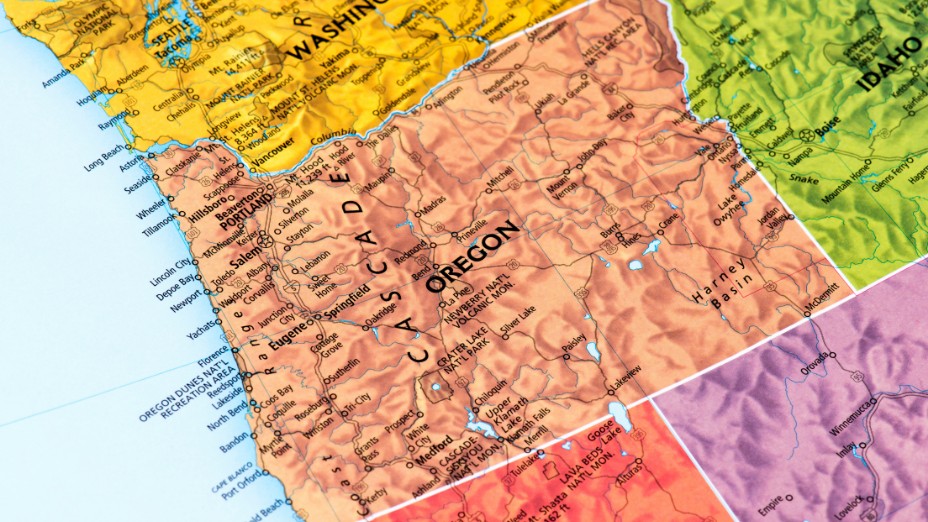 What Is Oregon Known for & Famous For?

Oregon is America’s 33rd state and 9th largest in terms of area. Known as the beaver state, it is a popular travel destination for local and international tourists. So, what makes Oregon famous?

Oregon is famous for its rocky coastline, beautiful forests, unique wildlife, and easygoing culture. Tourists visit the state to explore the famous Oregon Trail and other natural landmarks like the Multnomah Falls, Willamette Valley, and Hells Canyon.

Let’s explore the major natural attractions in Oregon so you can make the most out of a trip to the beaver state.

Oregon is nicknamed “The Beaver State” because of its large number of beavers, the history associated with the beaver fur trade, and the importance of beavers in the state’s landmarks. The famous Oregon Trail formed because the beaver trapping industry peaked in the 1800s.

Oregon has many natural streams that form the ideal habitat for beavers.

These areas were originally home to large beaver populations, which have since declined due to overhunting. In 1969, the beaver was made the official state animal of Oregon, and conservation efforts helped their numbers increase.

Beavers play an essential role in regulating the natural flow of water in the forests of Oregon. They also help with erosion control and are critical in maintaining the famous wildlife parks in Oregon.

The Oregon Trail is a historic wagon route that stretches from Kansas in the east to Idaho and Oregon in the west. It connects the Missouri River to the many streams that run through Oregon and was used by fur trappers, settlers, and explorers in the 19th century.

This trail was originally laid out in the Lewis and Clark expedition and was then developed by fur trappers and settlers.

However, once the transcontinental railroad was completed, the usefulness of this trail came to an end. Today, parts of the Oregon Trail are used for hiking, camping, and other recreational activities.

The role of The Oregon Trail in the history of Oregon played an important role in the westward expansion of the States and assisted the California gold rush. Many of the smaller towns in Oregon came into being from this trail.

Today, Highway 26 and Interstate 84 run through part of what used to be The Oregon Trail.

Oregon is famous for its Wild West past and played an essential role in the westward expansion of the US. Ever since the Lewis and Clark expeditions, more travelers started settling in the state to take advantage of the booming fur trade, growth in mining, and vast open lands.

Many Oregon towns which were prominent during the Wild West expansion are now abandoned.

However, they are still popular tourist attractions, and many towns still have the Wild West vibes. Visit Owyhee Canyon, Steens Mountain, Shaniko, or Jacksonville to get a glimpse of life in the Wild West.

Oregon is famous for the variety of wildlife that inhabits the many forests, rivers, and beaches in the State. Oregon’s famous mammals include:

Oregon is also home to many rare bird species, such as the spotted owl and bald eagle. The Snake River, Willamette River, and other rivers in the State are home to indigenous spotted trout, salmon, and catfish.

Whether you’re a trophy hunter, fishing enthusiast, or bird watcher, Oregon is the perfect place to go after America’s most famous wildlife.

Salem is the capital of Oregon and the second-most populous city.

Famous for its vineyards and wine breweries that are open to the public, Salem holds many wine tasting festivals yearly. Salem was formed around the Willamette River, which runs through the city’s center.

Salem, OR, is nicknamed the “Cherry City” for the high-quality cherries that are grown near the city. It still hosts many smaller cherry festivals, although the Salem Cherryland Festival was discontinued after the 1950s.

Salem is also home to the 100 acre Cascades Gateway Park, the DeepWood Museum, and other historical sites for visitors to explore.

Known as the “City of Roses,” Portland, Oregon, is a scenic and vibrant city littered with parks, unique food spaces, and heritage sites. It is home to the famous Multnomah Falls and Forest Park, one of the world’s largest urban forests.

With plenty of shopping areas and great cuisine, Portland is one of the best cities to visit in the US.

Explore the famous Pearl District in downtown Portland and take a trip in the Portland Aerial Tram to view the city from 500’ (152.4 m) in the air. Other major attractions to visit in Portland include Washington Park and Powell’s City of Books.

With a wide range of entertainment activities and a clean, scenic environment, Portland should be on every traveler’s list.

If you’re an NBA fan, you may want to get a ticket to the Moda Center to watch the Trail Blazers in action. With an entertaining fan base, the atmosphere for the Blazers’ home games is electric and entertaining.

They are relatively successful in the MLS and have won the MLS in 2015.

If you’re interested in soccer, you’ll enjoy watching the Portland Timbers home games in the electric atmosphere of the Providence Park stadium.

Oregon is usually divided into seven regions, each with distinct landscapes and natural attractions. It is home to contrasting scenic landscapes, from the Cascade and Klamath Mountains to the Willamette and Rogue Valleys.

You can travel through the desert plateau region to the volcanic Cascade mountain range or hike through the lush green forests along the coast. Oregon is a place of natural beauty and contrasts, which is why many hikers, mountain climbers, and camping enthusiasts visit the state for holidays.

The valleys of Oregon are also famous for their scenic waterfalls and lush green forests.

Home to diverse fauna and flora, Oregon is a dream destination for nature lovers. Whether you want to explore the natural valley trails by hiking or you prefer to trek through the dense forests, Oregon has everything an explorer would dream of.

Oregon is home to the famous Crater Lake, which lies in the Crater Lake National Park. Known as one of the world’s clearest lakes, Crater Lake is a sight to behold. It’s also the 7th deepest lake in the world.

Crater Lake National Park is Oregon’s only national park and is home to scenic forests, volcanic landmarks, and many famous hiking trails.

There are plenty of activities to do at the Crater Lake National Park.

Explore the famous lake, which was formed by an extinct volcano, or explore other extinct volcanoes in the region, including Mount Scott and Union peak. Crater Lake is just as scenic in the winter as in summer when you can explore the Park on the popular Rim Drive.

The park is also home to bobcats, lynx, black bears, beavers, and other animals that Oregon is famous for.

At 11,249’ (3,428.7 m) above sea level, Mount Hood is the highest point in Oregon and a popular tourist attraction. It’s home to 12 glaciers and snowfields and is considered a dormant volcano.

Mount Hood is popular amongst mountain climbers and skiers and has six ski areas.

If you’re a fan of hiking, you’ll love the 1,000 miles (1,609.34 km) of hiking trails around the mountain. You can also trek from Mount Hood to Crater Lake on the Oregon Skyline Trail, which is one of the most scenic trails in the US.

Mount Hood is the perfect place to go camping, hiking, and fishing and is a paradise for outdoor enthusiasts. With plenty of lodges, camping spots, and ski resorts, it’s the ideal place to take a break from the summer heat.

Stretching 80 miles (128.75 km) through the state of Oregon, the Columbia River Gorge is one of the State’s primary attractions. Home to many famous waterfalls, including the Multnomah Falls, the Bridal Veil Falls, and the Latourell Falls, this river is the heart of many of Oregon’s primary tourist attractions.

The Columbia River Gorge is ideal for indulging in kiteboarding and other water activities. It’s also home to many hiking trails which lead to scenic waterfalls, fishing spots, and mountain views.

The postcard bridge falls can turn to ice in the winter, creating an otherworldly sight.

So, whether you’re planning on taking a scenic winter trip or want to enjoy the waterfalls in summer, the Columbia River Gorge is the ideal place to visit.

With a drop of 620’ (188.98 m), the Multnomah Falls is the highest waterfall in Oregon. Located conveniently near Portland, it’s a popular year-round tourist destination. They are fed by melting snow and rainfall and may partially freeze in winter.

It also has a double drop with amazing viewing platforms, making it perfect for snapping the picture you’ve always wanted. Since these falls are 30 miles (48.28 km) from downtown Portland, they are the ideal destination for a one-day trip.

Home to approximately 500+ wineries, the Willamette Valley is an agriculturally rich area of Oregon that spans 150 miles (241.4 km). The Willamette River and countless tributaries flow through this valley which was the primary attraction for settlers coming through the Oregon Trail.

Today, the Willamette Valley is home to 70% of Oregon’s population and plays a vital role in the state’s economy. It’s also the center of the State’s booming wine industry and attracts many wine enthusiasts yearly.

Located near the Multnomah Falls, the Oneonta Gorge is a partially hidden chasm with scenic waterfalls. An easy 2.7-mile (4.35 km) hiking trip will leave you speechless at the scenic chasm and mossy Oneonta Creek. You can also take the short hiking trip to the triple falls to experience the heart of Oregon’s scenery.

This scenic trail isn’t as frequented as the Multnomah Falls and allows you to interact with the raw scenic nature of Oregon.

Located 1.5 miles (2.41 km) from downtown Cannon Beach, Haystack Rock is one of Oregon’s best natural wonders. This amazing natural rock was formed by lava millions of years ago and has a height of 235’ (71.63 m).

It’s accessible by foot during low tide and has many tidal pools that are home to starfish, crabs, and other sea creatures. It’s the perfect destination for bird watching, kite flying, and picnicking.

Located in Oregon’s High Desert Area, Smith Rock State Park is a popular hiking destination. It’s also a popular climbing attraction and the birthplace of modern-day American Rock Climbing. The scenic hiking trails will take you through the popular camping grounds and many bird-watching spots.

Smith Rock should be on your travel list if you are a rock climbing enthusiast.

Some hiking trails even take you on a trip behind the scenic waterfalls.

Located in the Cascade Range, Cultus Lake is a popular boating destination in Oregon. Formed by a glacier, this lake was originally home to large beaver populations before fur trappers arrived.

It’s now a hatchery for rainbow trout and several other fish species native to the area. Cultus Lake is popular for camping, fishing, hiking, and recreational water activities.

Located in Eastern Oregon, Hells Canyon is the deepest river gorge in North America. Surrounded by rugged hills, most of the area around Hells Canyon is inaccessible by road. This canyon was created by the Snake River and contains many white river rapids. It’s a popular destination for camping, fishing, hunting, and whitewater sports.

Whether you’re planning a trip to Oregon for a vacation, or you’re looking to move there, Oregon has many things to offer and be proud of. From the natural scenery to the several large cities, you’ll find something to occupy your time.