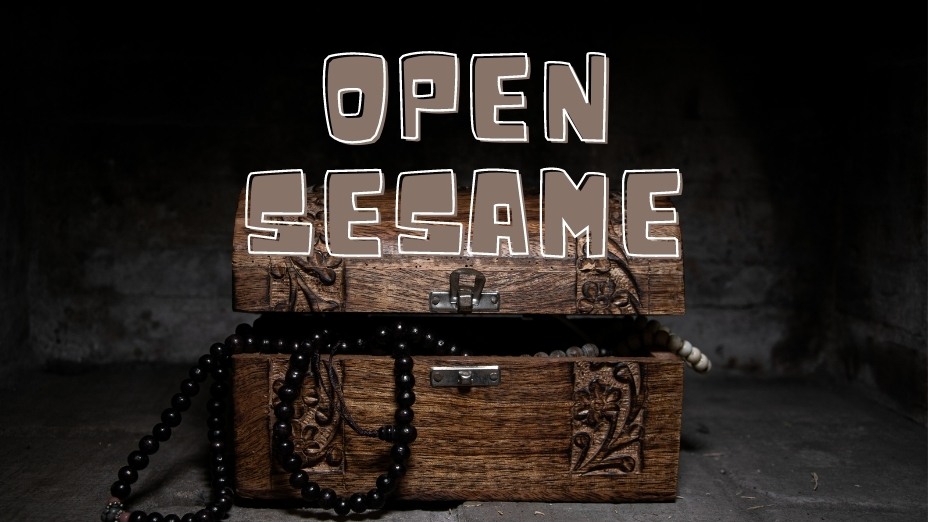 Where Did the Phrase “Open Sesame” Come From?

We’ve probably all heard of the phrase “open sesame” – in fact, the phrase has become such a part of our everyday lexicon that we say it all the time without really thinking about it. But where did the phrase come from? And what does it really mean?

The phrase “open sesame” comes from the classic story Ali Baba and the Forty Thieves, from the book One Thousand and One Nights. Most people understand the phrase to be like a command, something to be said when asking for something to be opened. The true author of Ali Baba is contested.

Keep reading for more about the phrase “open sesame” – what the phrase really means, where it came from, and why some people insist it’s pronounced “open says me” instead.

Where the Phrase “Open Sesame” Comes From

Ali Baba and the Forty Thieves, one of the stories from the book One Thousand and One Nights, originated the phrase “open sesame.”

Most of us are familiar with the story of the impoverished woodcutter Ali Baba and his discovery of a cave filled with the stolen treasure of forty men. Ali Baba can open the cave door by using the magic phrase “open sesame” and close the cave entrance with a similar command: “close sesame”.

When Ali Baba takes some of the thieves’ treasure, they hunt him down to protect their secret, but Ali Baba foils the leader of the thieves’ dastardly plan with the help of Morgiana, a very cunning slave-girl. 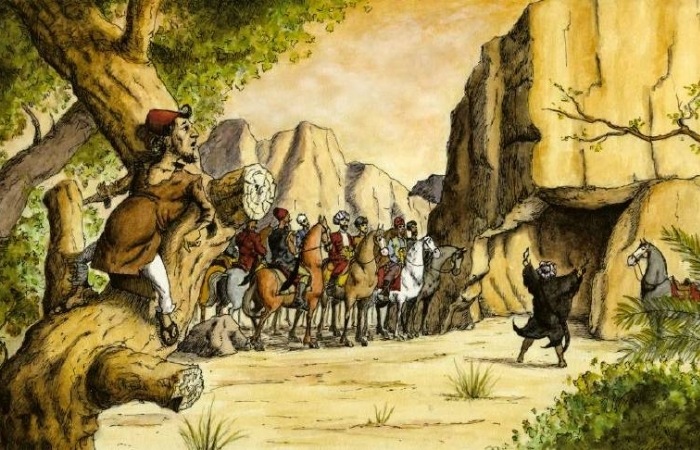 Who Wrote Ali Baba and the Forty Thieves?

Interestingly, while the collection of stories known to us as One Thousand and One Nights has existed for many centuries, not all of the famous stories we know today, such as Ali Baba and the Forty Thieves and Aladdin, were in the original Arabic collections.

Ali Baba and the Forty Thieves was actually in the collection of short stories by Antoine Galland, who translated the book to French in the early 1700s (the first known translation of the source material to another language). 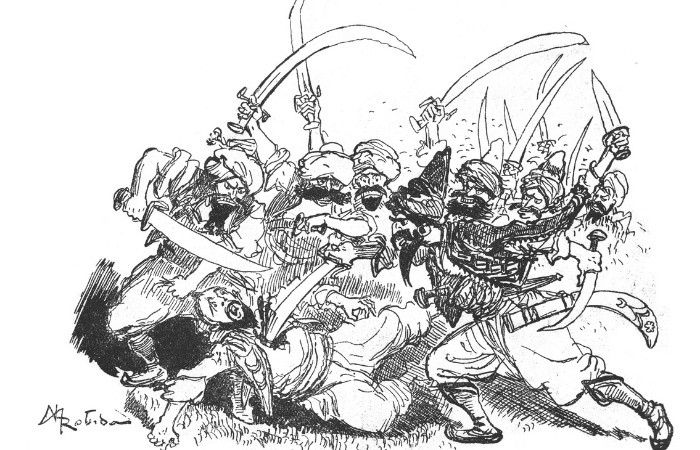 According to Galland, he heard the tale from Hanna Diyab, a Syrian merchant and storyteller. It is thought that Diyab may have authored the story of Ali Baba and the Forty Thieves himself because it had never previously appeared in any other versions of One Thousand and One Nights. Diyab was also known as a creative storyteller in his own right.

However, some scholars do still believe that Galland wrote the tale of Ali Baba himself. 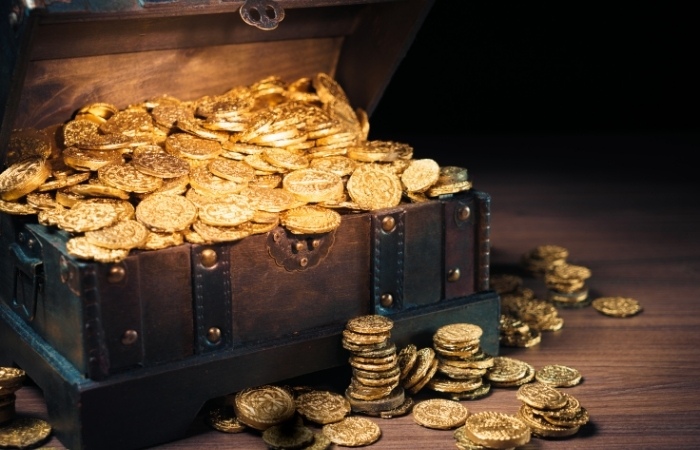 What Does “Open Sesame” Mean?

In our modern understanding of the phrase, “open sesame” generally means “please can you open this” or “open this now.”

However, there’s currently no official explanation of what the phrase means, although there are several theories. It’s important to note that the history behind the meaning of the phrase “open sesame” and the history of Ali Baba and the Forty Thieves itself is muddled, to say the least.

Maybe one day we will have a concrete explanation, but for now, here are three of the strongest (and most interesting) theories.

Some Believe the Phrase To Be Hebrew in Origin

One possible theory about the meaning of the phrase “open sesame” is that it actually relates to the word “password.” This is because the word “sesame” sounds very similar to the Hebrew word סיסמה (sisma), which is pronounced as “sees-ma”, and means in a general sense “password.”

The theory is supported by the fact that Ali Baba uses the phrase to open the magical door of the cave hiding the treasure of the forty thieves – as if he’s using a password to get inside.

However, this theory isn’t correct. Though the words do sound similar, they aren’t related. Sesame is actually a word with Greek and Latin origins and has the same meaning that we know today – it’s simply the seed of the sesame plant. 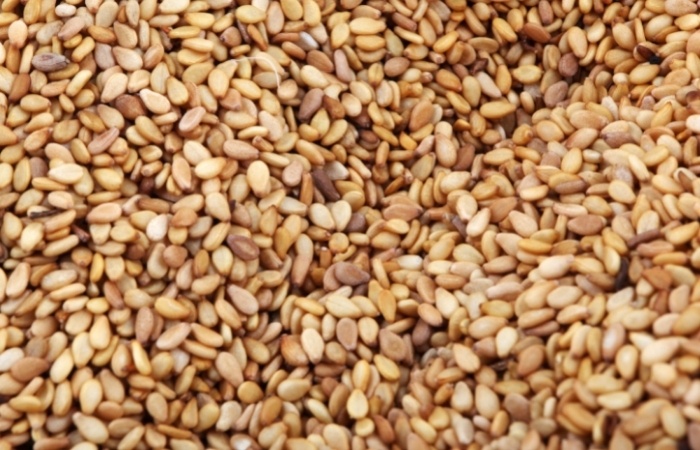 One very literal theory about the meaning of the phrase “open sesame” is that the phrase is actually a direct reference to sesame seeds, albeit in a symbolic sense. When Ali Baba is saying “open sesame” to the cave door, he’s referring to how sesame seed pods open to reveal their bounty.

Another way the phrase might literally be connected to sesame seeds is through the Babylonian practice of using sesame seed oil ritualistically.

However, while it’s the work of English scholars to see symbolic meaning in literature, it seems unlikely that the phrase “open sesame” actually relates to sesame seeds. 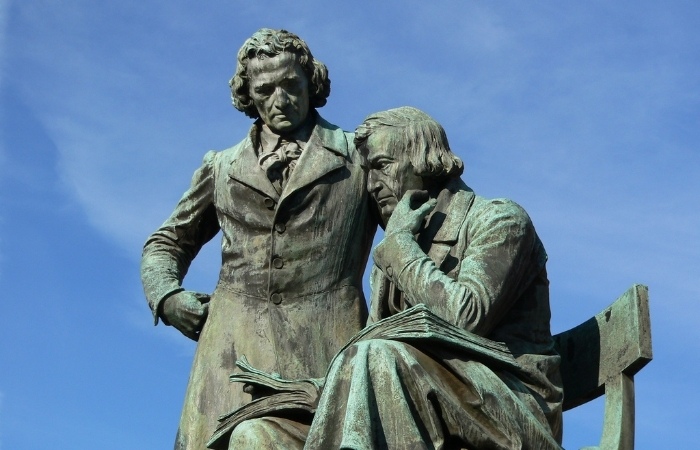 A statue of the Brothers Grimm in Germany

Similiberg is a very old German story, collected as part of the Brothers Grimm’s fairy tales. It tells a similar story to Ali Baba and the Forty Thieves, but the treasure is hidden not in a cave; this time it’s in a mountain. To access the treasure, the brothers call the mountain “Berg Semsi, Berg Semsi, tu dich auf,” which means “Semsi mountain, Semsi mountain, open.”

If we’re to believe some scholars, this Germanic tale may have been Antoine Galland’s inspiration for Ali Baba and the Forty Thieves instead of the story told by Diyab. In this case, perhaps “open sesame” really relates back to “semsi” – an ancient Germanic term for “mountain.”

Why Do Some Written Versions of the Story Use the Phrase “Open, O Simsim?”

If you have read a version of Ali Baba and the Forty Thieves in English, you likely have been reading the Richard Burton translation. And, most likely, that version will have Ali Baba utter the phrase “open, O Simsim” to the door instead of anything to do with the word “sesame.”

Why is it different? Well, in the French version of the story by Galland, Ali Baba says “Sésame, ouvre toi!” This is where the “sesame” part of the phrase came from. When Burton translated this into English, the phrase was changed to “open, O Simsim,” which is the English translation of the Arabic word for “sesame.”

If you’re one of the countless people that swear that “open sesame” is really meant to be pronounced as “open says me,” you have Popeye the Sailor to thank.

In the 1937 cartoon short Popeye the Sailor Meets Ali Baba’s Forty Thieves, the titular sailor at one point ends up stuck down a well, tied to a rope hanging above shark-infested waters (just a regular day for a cartoon). Popeye, of course, relies on his spinach-fuelled strength to get him out of danger, and utters the phrase “open, says me!” to the can of spinach he has conveniently been carrying around with him on his travels.

When Popeye says “open, says me,” it’s obviously intended to be a joke, a riff on the famous phrase from the story the cartoon is parodying. However, this joke has stuck around and become something of a linguistic legend – many people think it’s how the phrase is intended to be said.

Watch the video below and see the joke in question for yourself:

The phrase “open sesame” has transcended its source material and found a firm place in the everyday language of our world. It may never be completely clear what exactly the phrase means or where the original story of Ali Baba and the Forty Thieves came from. What we do know, however, is that the phrase is in no danger of disappearing and that people are still using it in conversation every single day.