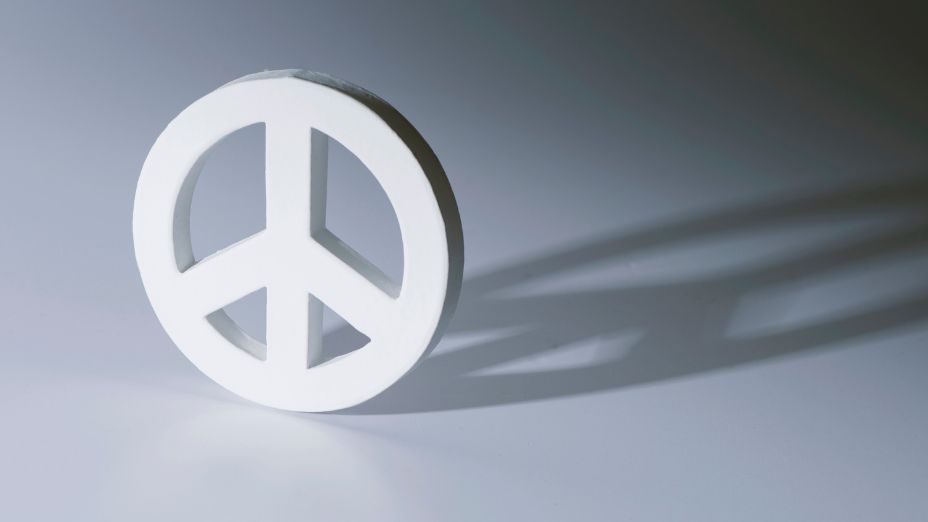 The peace sign is one of the most universally recognizable symbols in the world. Regardless of background, creed, race, or religion, we fundamentally understand what it represents when we see it. The little round icon with its strategically placed arms and legs transcends language, but where did it come from, and for what purpose?

Gerald Holtom designed the peace sign in 1958 to protest nuclear weaponry in the United Kingdom. Holtom fused his knowledge of semaphore with his own feelings of desperation to create a timeless and enduring symbol.

This article examines the origins of the peace sign, Holtom’s intentions in designing it, and the symbol’s enduring popularity across generations and national boundaries.

Gerald Holtom designed the peace sign as we recognize it today. Holtom, a graphic designer, and Christian pacifist created the symbol to reflect the frustration and helplessness he and other members of the British Campaign for Nuclear Disarmament felt.

Holtom originally intended to use an encircled Christian cross as the emblem, but various clergy members expressed distaste at the cross being used as a symbol of protest.

It isn’t easy to imagine a time when the peace sign wasn’t a part of our shared visual vocabulary. Every great symbol has a birth, however. The peace sign has been around for generations, traveling across oceans to inspire different forms of peaceful protests.

The peace sign created visual history on Easter weekend in 1958, beginning on Good Friday. The icon debuted at a 52-mile (83.69-km) protest march from London to the Atomic Weapons Research Establishment in Alderman in Berkshire. This protest march was the first demonstration to display the icon.

The British Campaign for Nuclear Disarmament displayed its new logo on 500 cardboard lollipops. Half of the symbols were black on white, and the remaining were white on green to represent the change from winter to spring. The color transition reflected a move from death to life in honor of the Easter weekend.

The Direct Action Committee Against Nuclear War eventually joined with other small anti-nuclear armament groups to form the Campaign for Nuclear Disarmament. This group adopted the peace sign as their official logo.

It didn’t take long for the image to travel to America. Holtom’s peace sign appeared in the literature of the American anti-nuclear coalition, the Committee for Nonviolent Action, in 1960. Following the icon’s migration to the United States, the peace sign became ubiquitous. The symbol became a symbol of American resistance to the Vietnam conflict.

Bayard Rustin likely brought the symbol to the United States. Rustin was an associate of Martin Luther King, Jr, and marched in the London protests. The Americanized version of the peace sign lost its connection to nuclear armament and became a repudiation of war in general.

The peace sign was explicitly designed as a repudiation of nuclear weaponry. Holstom set out to create a symbol to represent his pacifist group, the Direct Action Committee Against Nuclear War. The group needed a logo for their signs and banners, and Holtom, as a graphic designer, used his skills and personal experience to design the image.

Holtom designed the peace sign to decorate the banners for a London nuclear disarmament march. He intended the symbol as a visual representation of his desperation and hopelessness.

The symbol had two primary inspirations: the visual of a man, imploring, and the representation of Naval characters for “ND.”

Holstom created the symbol to represent the Direct Action Committee Against Nuclear War in their various protests against nuclear weaponry. While the peace sign has come to mean multiple protest groups, the initial intent was expressly and explicitly a reaction to atomic armament.

Though Holtom created the peace sign specifically to represent nuclear disarmament, it is currently available to anyone who wants to use it. Groups or individuals seeking to use the peace sign don’t need to pay any costs or apply for any rights of use; however, the Campaign for Nuclear Disarmament asks commercial users to donate to the CND’s work.

Difficult as it is to conceive, some groups oppose the peace sign. Like the John Birch Society, far-right groups denounced the symbol as satanic in 1969. Though absurd, their claims gained enough press coverage that some still associate the peace sign with satanism. Some fraudulently claim the symbol has occult origins.

American extremists claim the symbol represents everything from satanism to communism, despite the logo’s origins being well-documented and verifiable.

Two distinct sources influenced Holstom’s peace sign design, both rooted in his commitment to non-violence and pacifism. Though it appears simple, the symbol takes inspiration from semaphore symbols, Goya’s artistic work, and Holstom’s own deep sense of despair and hopelessness.

Holtom designed the symbol from the depths of hopelessness. He created it as a physical reflection of his spiritual tumult. Holstom explained his physical inspiration in TM: The Untold Stories Behind 29 Classic Logos.

Holstom stated: “I was in despair. Deep despair. I drew myself: the representative of an individual in despair with hands palm outstretched outwards and downwards in the manner of Goya’s peasant before the firing squad. I formalized the drawing into a line and put a circle around it. It was ridiculous at first and such a puny thing.”

Semaphore is communication via flags, used primarily by the navy. The peace sign uses the semaphore symbols for “N” and “D” to deliver the message of nuclear disarmament. “N” and “D” are represented via two symbols, angled down at 45 degrees for “N” and a flag aimed straight up and another directly down for “D.”

Many groups use the peace sign to represent their causes and work. These sects often adapt the design to reflect their purposes, maintaining the familiar iconography of the logo while adding their own personal details. These include:

Other Symbols of Peace

While the peace sign is iconic enough to have earned an article, making it “the” peace sign, many other symbols represent it. These include:

The dove’s iconography began with goddesses, including Asherah, Venus, and Fortunata. While the symbol gained prominence in the Mediterranean, the dove is now most closely associated with Christianity, specifically Noah. After the flood, the Biblical sailor sent out a dove to scout out land, and the bird’s return heralded peace and holiness.

The olive branch is so nearly associated with peace that simply the phrase indicates detente. Enemies extend an olive branch to propose peace or truce with each other. The sprig’s symbolism extends back to ancient Greece. Olive branches adorned young brides and Olympic champions.

In Greek mythology, Poseidon and Athena battled to rule Athens. Poseidon produced a limitless well of water, while Athena’s javelin produced an olive tree. The human citizens valued the olive tree more dearly than the water, and the symbol has endured ever since.

The extension of the middle and index fingers into a V is almost universally recognized as a symbol of peace. The hand signal originated in World War II as a sign of community. The word for “victory” begins with a “v” in French, Flemish, and English, covering many of the allied powers. Both Winston Churchill and Charles de Gaulle used the symbol to raise morale and inspire nationalism.

While the V symbol meant “victory” during World War II, protesters and pacifists in the United States in the 1960s used it to represent peace. The signal became a rallying cry for non-violence and an end to war.

“In Flanders Field” by John McCrae is one of the most well-known poems of all time. The verses use poppies to symbolize the grief and loss caused by war, and following World War I, red poppies became an emblem of remembrance. The anti-war Women’s Co-operative Guild began selling white poppies in 1933 to express anti-war sentiment. The white contrasted the red to signify an absence of bloodshed.

The peace sign remains recognizable because of its ostensible basicness. The symbol’s simplicity is deceptive, however. Gerald Holtom took many considerations into account when he designed the logo as a sign of nuclear disarmament, representative of both his own inner tumult and the semaphore symbols for “N” and “D.”

The peace sign’s power and import transcended its initial purpose. The logo traversed oceans and caused it to become one of the most universally borrowed and understood icons in the world today.