11 Cool Things Ottawa is Known For & Famous For What Is Ottawa, Ontario Known For

Despite being Canada‘s capital city, Ottawa isn’t as populous as other major Canadian cities like Toronto and Vancouver. It has a more relaxed and quiet nightlife than Toronto and Montreal, so if you like more peace at night, this is the place to be. Now, you might think Ottawa is boring, but once you get to know it better, you’ll love it.

Ottawa, Ontario, is known for its Parliament Hill, rich history, diverse cultures, and summer music festivals. The city is also known for having the world’s biggest outdoor skating rink. It’s common to see cyclists, joggers, and skaters all day in Ottawa, too—welcome to the fitness-friendly city.

If you’re thinking about visiting Canada after the pandemic, you might want to add Ottawa to your travel list. There’s so much to discover in Ottawa. Keep reading to learn what the city is known for (besides Alanis Morissette) and what you should explore upon your visit there. Ottawa Is Known for Its Parliament Hill

Ottawa’s Parliament Hill is perhaps what Ottawa is best known for, attracting about 3 million people each year—1.5 million of them being tourists. Parliament Hill features a gothic-style building. The attraction is also known for its Peace Tower, a monument created to remember the people who died serving the country.

You need an entrance ticket for Parliament Hill, but free tickets are also available on a first-come-first-serve basis. At this place, people can sit and enjoy the scenic view of the Ottawa River in the summer.

There’s also the Centennial Flame (Flamme du centenaire in French), a monument located near the center gate, right before the Peace Tower, built to commemorate Canada’s 100th anniversary as Confederation.

The Centennial Flame has a fountain in which people can throw coins for good luck. Many don’t realize that the coins will be collected, sorted, and put into the government bank account, which will then go to a person with a disability to conduct research. The government will reward the money to the Centennial Flame Research Award’s winner.

The fountain that encompasses the Centennial Flame is special. That’s because it doesn’t freeze during a Canadian winter, thanks to the Centennial Flame that burns above water. In winter, tourists and the locals will get to see 400,000 lights illuminating the building. The show usually takes 15 minutes, from 5:30 to 11:30 pm. 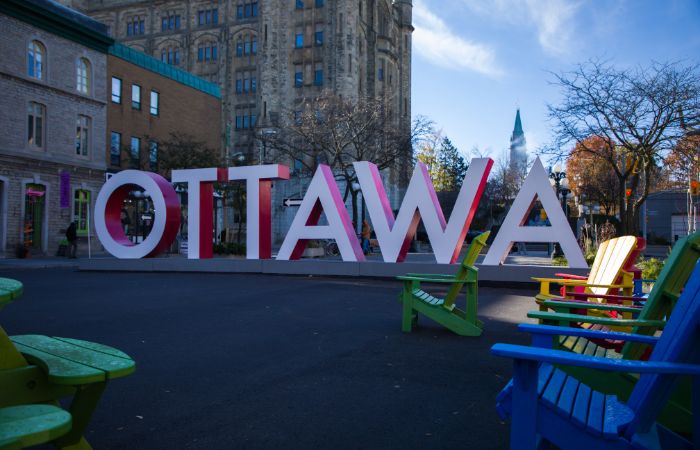 Ottawa, Ontario Was Named After the Odawa People

Ottawa, Ontario, was named after the Odawa people. Before the French and the English arrived, the land was inhabited by Native Americans from the Algonquin tribe, who started their settlement in the Ottawa River valley. The Algonquin people were known as traders who took part in local fur trading.

The name Ottawa originated from the word ‘Odawa,’ which means “traders” in the Algonquin native language. So if you visit Ottawa, the locals might tell you that the city is pronounced “Odawa.” Although the Algonquin people were known as traders, they were also excellent hunters who would hunt porcupine, rabbit, wolf, and muskrat.

The Odawa people stayed at the Ottawa River valley in the mid-1600s but not for a long time. Their traditional settlement was at Lake Huron, bounded by Michigan on the west and Ontario on the north and east. During the American Revolution, the Odawa people fought for the British against the Americans.

The Odawa people continued to fight the Americans even after the British surrendered and turned their backs on them. When the tribe lost their battles, they had to give up most of their lands in Ohio and were later sent to a reservation in Kansas. Today, you can find about 15,000 Odawa people in Ontario, Michigan, and Oklahoma.

When Ottawa was built, it wasn’t called Ottawa but Bytown, which used to be a town but now a city. Bytown came about after the Rideau Canal construction that led to the growth of the Ottawa River timber trade. The first mayor named John Scott, was elected in 1847.

If you’re interested in more about Ottawa’s history check out this book on Amazon!

Ottawa, Ontario Is Known for Bilingualism

Many people from Ottawa are bilinguals. So, upon your visit to this city, you’ll likely hear people speaking English and French. You’ll hear some French as soon as you cross the Royal Alexandra Interprovincial Bridge (also known as the Alexandra Bridge or Interprovincial Bridge) that connects Ottawa, Ontario, with Gatineau, Quebec.

Of course, you’ll likely hear more French the farther east you go. If you want to learn the language, you can do that at the University of Ottawa. And if you want to study common law in French in Ottawa, that’s fine, too—many students who study at the university use French as a second language.

As you explore an area in Ottawa where French is more dominant than English, don’t be afraid to say “bonjour” to greet the locals or whenever you enter a shop. According to the census data between 1981 and 2011, English was the mother tongue of 63.7% of people in Ottawa and only 15% for French. Only 37.2% of people knew English and French. 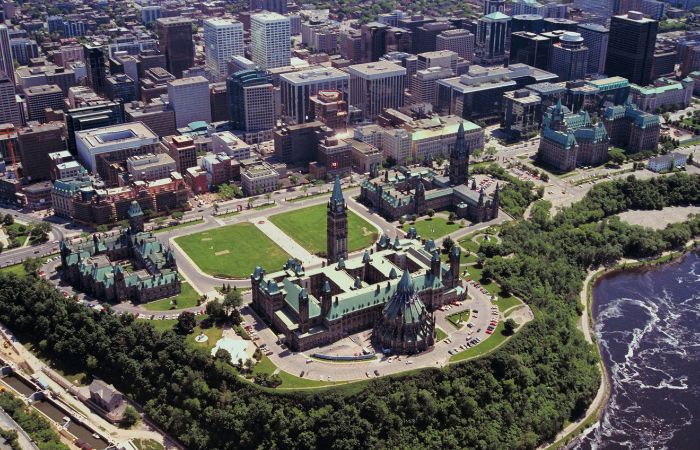 Ottawa Has Diverse Cultures and Ethnicities

Ottawa is a place with diverse cultures and ethnicities. Since it borders Gatineau, Quebec, most of its population can speak English and French. Many Ottawans travel to Gatineau to work or study, and many Gatineau locals come to Ottawa for the same reasons.

In Ottawa, you’ll find people from different ethnicities. In the beginning, the people in Ottawa were mostly Irish and French Christians. As of 2016, 23.7% of the population in Ottawa is made up of non-European whites.

Every year in June, Ottawa holds the Ottawa Dragon Boat Festival, a Chinese tradition of 2,400 years old. The event, held between the Rideau Canal and Rideau River, features thousands of paddlers and about 75,000 spectators. Apart from boat racing, there are also other exciting events such as Chinese dragon and lion dance and free concerts. Since Ottawa throws many exciting festivals throughout the year, there are always fun things to do in the city. As discussed earlier, Ottawa holds its yearly Winterlude, where people can come for free to share fun activities in the snow or participate in competitions like ice carving.

Ottawa is also home to the Ottawa International Children’s Festival, an event in which kids from all across the country can get together and be part of fun theatrical, dancing, musical, cultural, and educational activities.

Some other popular events in Ottawa are: Ottawa Is Home to the World’s Largest Tulip Festival

Each May, Ottawa holds the world’s largest Tulip Festival. The Ottawa Tulip Festival (also known as the Canadian Tulip Festival) attracts about 650,000 visitors annually, where they get to see and capture moments among more than 1 million tulips. Now, you might wonder why Canadians celebrate the Tulip Festival in the first place.

The Tulip Festival in Ottawa is celebrated to:

When WWII happened, Dutch royalties—Princess Juliana and her two daughters, Princess Beatrix and Princess Irene—sought refuge in Ottawa. During their stay in Ottawa, Princess Juliana gave birth to Princess Margriet. And Ottawa helped the royal family stay safe until Europe was finally safe from the war.

After the war, Princess Juliana returned to the Netherlands. To thank the Canadian people, the princess sent 100,000 tulip bulbs as gifts. The Dutch royal family continues to do so, known as the “Tulip Legacy,” which plays a significant role in how the festival started. 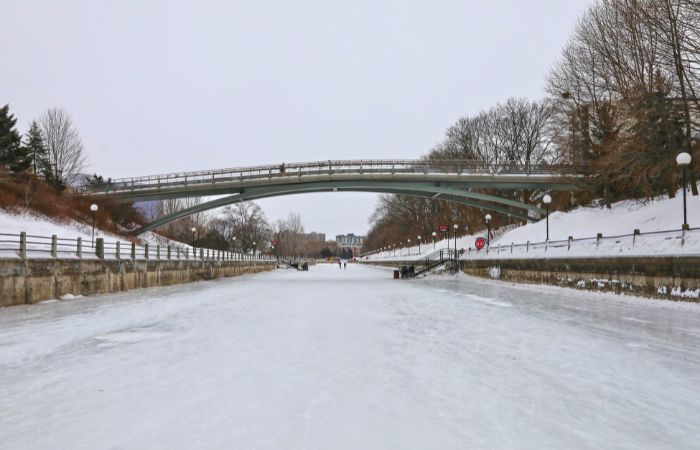 Ottawa is also known as the home to the Rideau Canal, which turns into the world’s biggest naturally frozen skating rink in winter. The Rideau Canal was once used as a protection from American invasion. Today, it serves as a serene waterway for recreation purposes.

In 2007, the Rideau Canal became a UNESCO World Heritage site, thanks to its historical background and unique design. Traveling along the canal by boat (you can rent from a local marina if you don’t own one) can be fun, and sightseeing can take at least three days. The Rideau Canal is 202 kilometers (125.51 miles) long, so you’ll want to stop from time to time to explore nearby attractions.

If you visit Ottawa in February, you’ll have the opportunity to skate on the city’s frozen canal during its winter-themed celebration known as Ottawa’s Winterlude. The event also features music shows, snow sculpting, and winter sports like ice slides, tubing, dog sledding, and more.

Due to the recent pandemic, though, the NCC has asked people not to travel to skate on the Rideau Canal—the rink is only open for skating for exercise. Ottawa, Ontario Is Host to the City’s Winterlude

The Ice Garden is an exciting place during the Winterlude because many colorful lights light the beautiful ice sculptures. If you’ve skated before, why not take skate lessons there? There are also ice hockey tournaments you might not want to miss. Ottawa, Ontario Is a Fitness-Friendly City

Ottawa is a fitness-friendly city, so one of the things you’ll notice about the city is how enthusiastic the locals are towards outdoor sports and exercise. Many of the city’s roads have bike lanes that help encourage more people to cycle to work or have a healthy lifestyle. Thanks to the dedicated bike lanes, people can enjoy avoiding car traffic.

The Capital Pathway is a pathway in Ottawa that shares a 220 kilometers (136.70 miles) route with Gatineau. People can go through it to get to local parks, gardens, and attractions. With such an extensive pathway network, no wonder Ottawa residents have embedded outdoor activities into their everyday lifestyle.

In winter, you’ll notice many Ottawans skating, especially on the Rideau Canal. Many like to ski, so it’s common to see the locals taking up cross-country skiing or snowshoeing. When it’s not too cold, some Ottawans go to Parliament Hill to do yoga, kayak on the canal, or go for a hike—more than 150km of hiking trails exist around Ottawa. The Mer Bleue Bog is the biggest bog in Ottawa and is the second-largest bog in Southern Ontario. There, you’ll find over 20km (12.42 miles) of hiking or cross-country skiing trails and forests. As you explore the 7,700 years old area, you may come across important plants and wildlife.

Then, there’s the Pine Grove trail south of downtown Ottawa, Greenbelt’s largest forest area, covering more than 18.4km (11.18 miles) of hiking, skiing, horseback riding, and walking trails. Locals love taking their dogs here, in a park called Conroy Pit, where they can run unleashed. Pine Grove is also great for picnics—you can find a picnic area near Trail 44 and Trail 43. Ottawa Is Known for Its Unique Art Galleries

Ottawa is famous for its unique art galleries. You can experience some of the world’s most beautiful and amazing art galleries in this city. The National Gallery of Canada, for example, is home to a 30-foot (9.14 m) tall spider named “Maman,” which looks like something that came out straight from Stephen King’s novel.

The size of the spider is intriguing enough, and one might ask, why is it called Maman? The artist of the spider, Louise Bourgeois, named his creation after his mother—Maman is French for mother. Unless you’re agoraphobic, the big spider will dazzle you.

Other unique art galleries in Ottawa are: 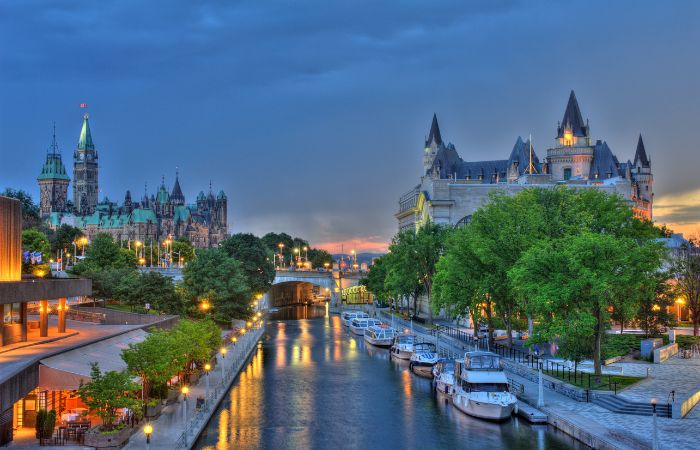 Ottawa is a unique and diverse city in Canada, with exciting events throughout the year. Its nightlife isn’t as interesting as the nightlife in Toronto or Montreal, but the city has many exciting events to keep people happy and entertained. Some of the city’s highlights are the yearly Winterlude, the Rideau Canal, the Ottawa Tulip Festival, and the National Gallery of Canada.

If you’re planning a visit to Ottawa be sure to check out this guide on Amazon!