Top 12 Things Perth is Known For 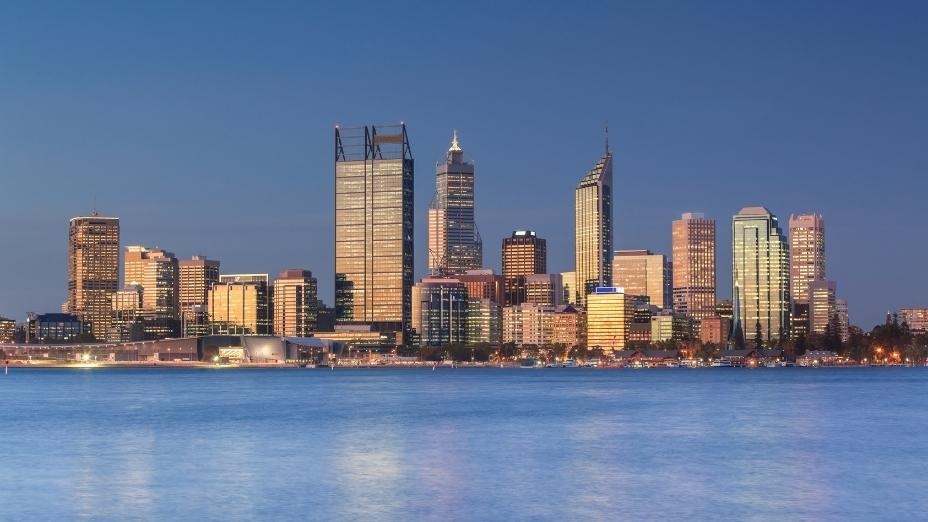 What Is Perth, Australia Known For?

The capital of Western Australia, Perth is a large, bustling city located between the Indian Ocean and the Darling Range. Since the original British settlements long ago, the city of Perth continues to flourish – but what makes Perth, Australia, so special?

Perth, Australia, is known as the largest city in Western Australia and the sunniest and most isolated capital in the world. Its history and recognition as the “City of Lights” continues to intrigue people far and wide. Perth is renowned for its 19 beaches, wildlife, Swan River, and craft beer.

While Perth may not be the first city that you think of when you think of going “down under,” it has plenty to offer both visitors and residents. In this article, I’ll cover the many reasons why Perth is famous. 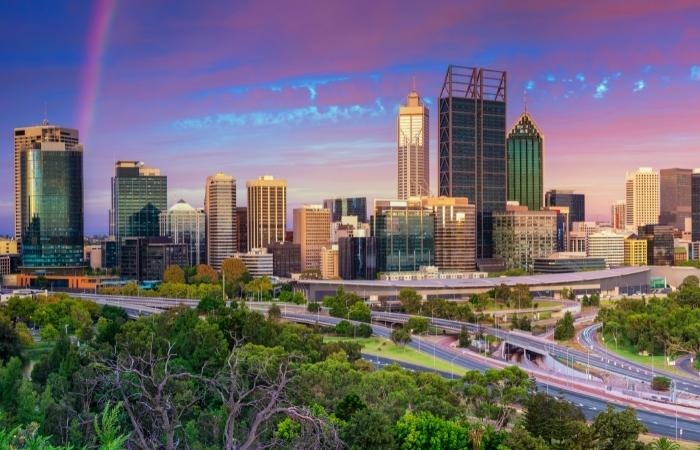 Perth Is the Largest City in Western Australia

Captain Willem de Vlamingh, the first European to sight Perth, noted in 1697 that Perth was “inhospitable” and essentially useless for an agricultural settlement.

It wasn’t until 1832 that Europeans would establish a full-blown settlement in the area – and even then, the population was relatively sparse.

Nearly twenty years after the first European settlement, Western Australia opened its doors to convicts for labor purposes. Perth Town Hall, like many of the colonial buildings in the area, was constructed by prisoners. In 1856, Queen Victoria established Perth as a city. Despite her designation, Perth was still relatively small – only 3,000 residents inhabited the rural area.

However, the population would continue to grow.

The discovery of gold in Kalgoorlie and Coolgardie caused an explosion in Perth’s population, and by 1901, the population rose to 61,000 people.

After World War II, between 1947 and 1953, Perth reached 280,000 people, thanks to public works, immigration programs, and foreign investments. By 1975, the once sparsely populated Perth was now a bustling city with over 825,000 residents.

Today, Perth is the largest city in Western Australia and is Australia’s fourth-largest city, with a population of 1.97 million people. 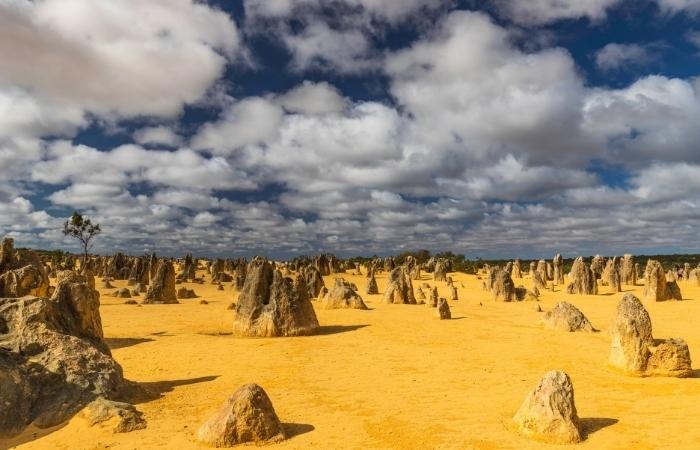 It Is the Most Isolated City in the World

Despite being Western Australia’s largest city, Perth is the most remote capital in the world. Travel west from the city center, and you’ll reach the Indian Ocean. Head east, and you’ll reach Adelaide – but only after traveling 1,307 miles (2,104 km) on Eyre Highway through the Nullarbor Plain, a barren, treeless stretch of land, which is the equivalent of a three-hour plane ride.

In fact, most of Western Australia requires a flight to reach any other city on the continent.

To give you a better idea of just how isolated Perth truly is, the city center is closer to Singapore than Sydney.

When in the city center, it may not feel as though you’re isolated. However, with one side of the city bordering the Australian outback and the Indian Ocean dominating the other end, sometimes this bustling city feels a little lonely, especially when you look out onto the flat land with never-ending blue skies. 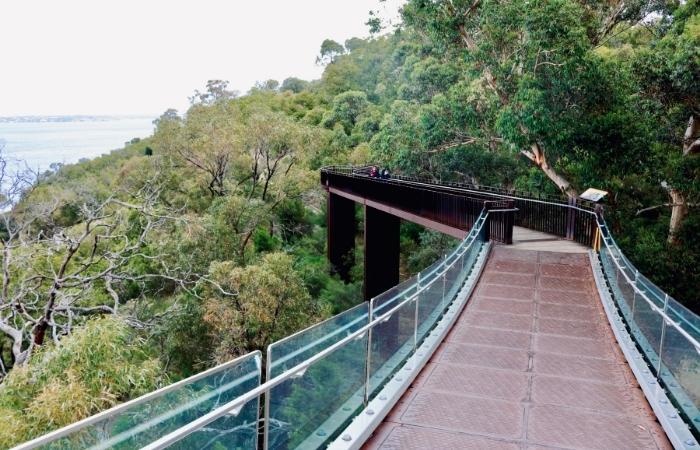 Perth Has a Deep, Ancient History

Despite being the most isolated capital on the planet, Perth, Australia, is no stranger to settlements. It was inhabited by Aboriginal Australians for nearly 45,000 years.

The Noongar people lived in the wetlands of Perth, particularly on the Swan Coastal Plain. This area was significant to them for both food and spirituality. Today, the Noongar people refer to Perth as Boorloo, meaning “big swamp.” 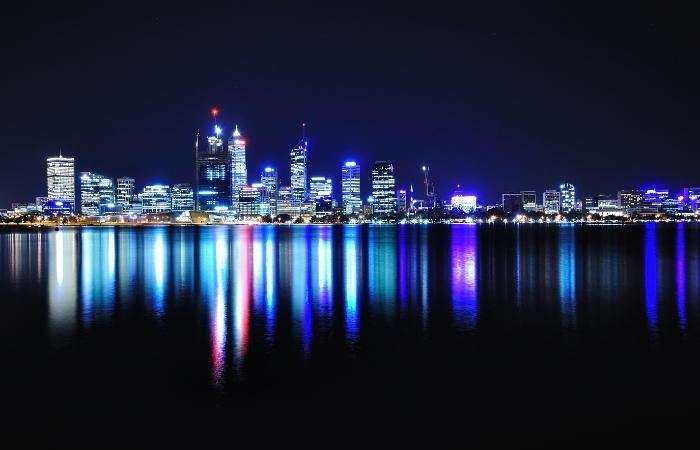 It Is the City of Lights

Perth gained the attention of the international media in 1962 when local residents turned on their lights (and street lights) when astronaut John Glenn passed over the area on Friendship 7. Before the 60th anniversary of the event, Glenn thanked the thousands in Perth who rushed out to wave porches into the night sky.

This led to Perth’s nickname, the “City of Lights.” In 1998, John Glenn would pass by again, this time on the space shuttle Discovery, and Perth repeated the shining act of recognition. 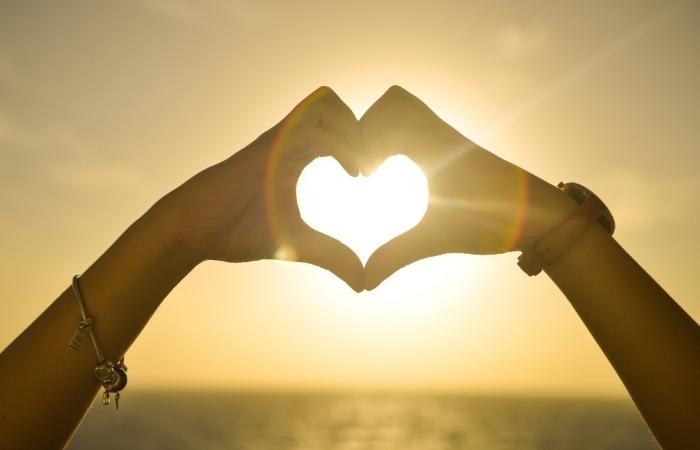 Perth Is the Sunniest Capital on Earth

In addition to lighting up the sky for John Glenn, Perth also lights up for residents – thanks to the sun! Perth is the sunniest capital city on earth. Those that live here enjoy an average of eight hours of sunlight per day, all year long.

As if that’s not enough to make you want to pack your bags, Perth also boasts 19 windswept, white sand beaches, all within driving distance of the CBD (Central Business District). Surf culture is big in Perth, thanks to the towering waves and beautiful weather.

During the winter, Perth stays warm and sunny, and in the summer, the sub-tropical climate brings heat waves that send residents rushing to the shores. Out of the 365 days a year, Perth experiences 147 sunny days and 121 partly sunny days – so for more than ⅓ of the year, the city is basked in sunshine. 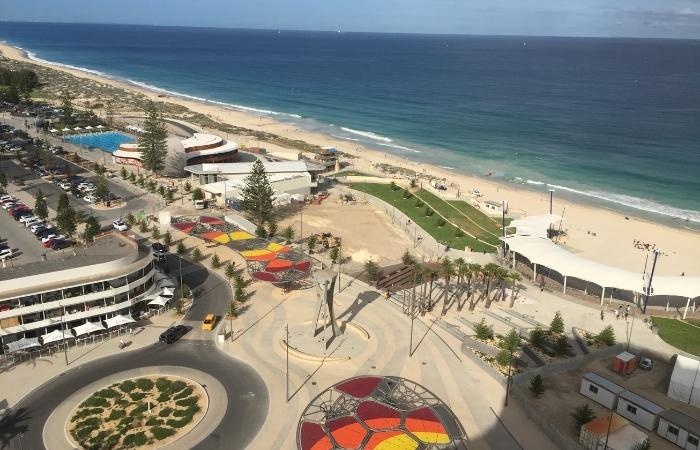 It’s Known for Its 19 Beaches

As mentioned earlier, Perth offers not one, not two, but 19 beaches. Each of these beaches features soft, white sand with recreational activities for families, children, and adults alike. Below, we’ll cover some of the most famous beaches in Perth and a little bit of what they have to offer. 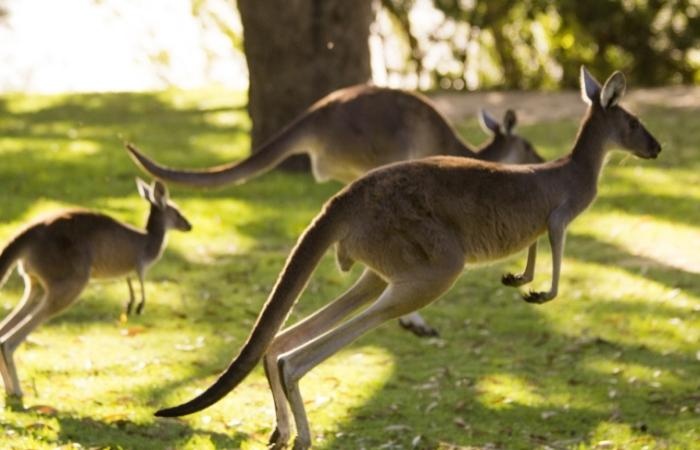 Perth Has Unique Nature and Wildlife

Although Perth may be isolated from other Australian cities and people, the area is home to over a thousand different animal species, many of which are unique to Western Australia. The city is renowned for its unique wildlife encounters on both land and sea.

To make wildlife viewing more interactive, the city boasts majestic nature parks, preserves, wildlife centers, and walking trails, most of which are within a short drive of the CBD. 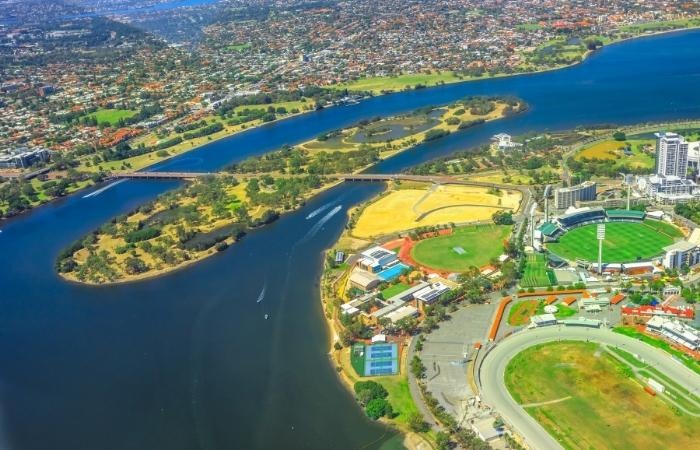 Located in the Swan River on the east side of Perth, Heirisson Island covers 3,074,000 square feet (285,600 square meters) of land. Before it was developed, it was made up of several smaller land masses, surrounded by a stretch of muddy shore.

Heirisson Island was reclaimed and later developed into a single landmass. Today, it is home to a beautifully manicured nature reserve. Its secluded, quiet location makes it the ideal location for wildlife viewing. From kangaroos to a variety of different birdseed, the island has no shortage of animals and nature to see.

Newcomers to Perth may think that Caversham is just a local suburb, but the namesake is also shared with the popular Caversham Wildlife Park.

Purchased in 1988 by David and Pat Thorne, Caversham Wildlife Park began as a small assembly of animals, birds, and other wildlife. Over the years, David and Pat have expanded the park, continuously adding animals to their collection.

Today, Caversham Wildlife Park boasts over 200 animal species, many unique to the area. This makes their private collection one of the largest in Western Australia. The Wildlife Park is the first of its kind in Perth and attracts visitors far and wide.

At the park, visitors can enjoy immersive, interactive experiences in an authentic environment. They can interact with the many animals, from dingoes to the red fox, learn new information about the different species, and even take photographs with koalas or wombats.

This family-owned Perth business has been in operation for over 30 years. At Caversham, you’ll do more than just see animals – you can feed joeys, get up close with the koalas, and cuddle up with a wombat.

While most people might head out to Perth Zoo to see wildlife, Caversham Wildlife Park offers a more personal experience.

People living in or visiting Perth may love the immersive wildlife experiences, but there is nothing more breathtaking than Western Australia’s wildflowers. With over 10,000 different wildflower species, Western Australia is home to the world’s most extensive wildflower collection. Even more interesting is the fact that over sixty percent of them are unique to the area.

To view the magnificent beauty of these incredible plants, you don’t have to leave the inner city of Perth – wildflowers are abundant in nearly all areas of the city, from the grassy shores to the side of busy city streets. However, at the height of wildflower season, Kings Park Botanical Gardens offers splendid views of the flowers in bloom. And because of Perth’s incredible weather, the wildflower season lasts from June to November. 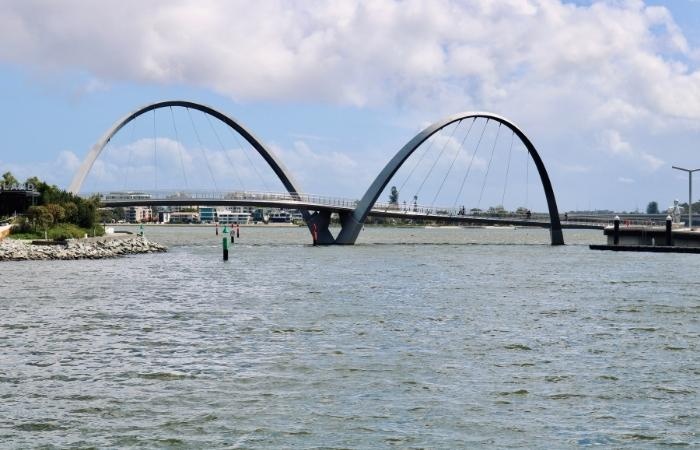 The City Rests Along the Swan River

The Swan River connects Perth’s many suburbs with the nearby hills and the Indian Ocean. Australian Aboriginals believed that a rainbow serpent, “Waugal,” created the winding river. They maintained that the river had major significance – and most Perth residents are inclined to agree. Swan River is so important, in fact, that it’s Western Australia’s first heritage icon.

Swan River is popular for its winding path and peaceful, tranquil trails for walking and cycling. The area is mostly sunny no matter the season, and the weather is perfect for picnicking, fishing, sailing, swimming, or kayaking along the riverfront suburbs.

One of Perth’s most distinctive tourist attractions is the Swan Bells.

The Swan Bells are a collection of 18 massive bells that hang atop a mesmerizing tower that stands out among Perth’s skyline. The copper and glass structure rises 271 feet (82.5 meters) above the winding Swan River. These bells are the largest set of change ringing bells on earth.

Interestingly, the bells are not rung by mechanical workings within the tower but by volunteers! Visitors can listen to the bells ringing on Wednesday, Thursday, Saturday, or Sunday from 12:30 p.m. to 2:00 p.m. Volunteers also host events and tours throughout the year.

Perth Is the Birthplace of Many Australian Craft Beers

If you thought that Perth, Australia, only offered seclusion and wildlife, you’d be sorely mistaken. Beer culture is strong in Perth, as evidenced by the numerous beachfront drinking venues and riverfront pubs.

In fact, Perth is the starting point for dozens of Australian craft beers, including the beloved Matilda Bay. The Northbridge Brewing Company, Feral Brewing Company, and Little Creatures Brewery are all located in or around Perth. More recently, the city has developed an interest in artisan gins, vodkas, and other spirits.

The Hippocampus Distillery, in particular, concocts small batches of different types of spirits using only locally sourced ingredients. Keeping up with the small-town/big city vibe, the distillery was founded by the owners of the Little Creatures Brewery in nearby Fremantle. 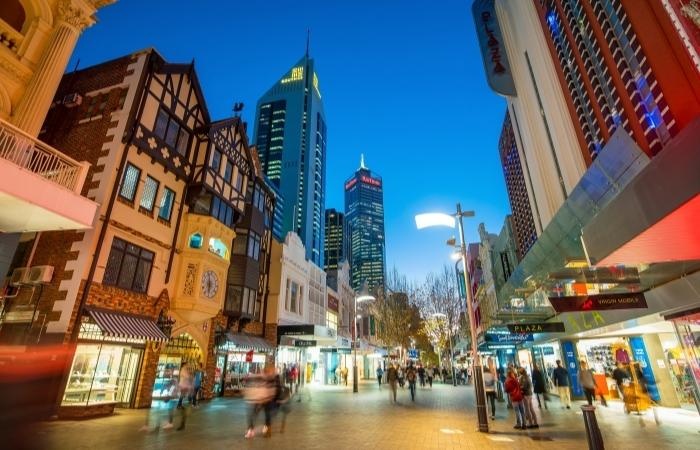 While not as well-known as the Australian cities of Melbourne and Sydney, Perth continues to grow – and for good reason. It may be a large city, but it boasts many secluded areas, including nature and wildlife preserves, so that visitors can enjoy the natural beauty of the Australian outback.

With its 19 white sand beaches and twisting Swan River, the City of Lights attracts tourists from all over the globe, from craft beer lovers to history buffs. Despite being isolated from the rest of Australia, people still find their way to this bustling city.

If you’re planning a trip to Perth be sure to check out Lonely Planet’s pocket guide book here.