Top 24 Things Peru is Known For & Famous For 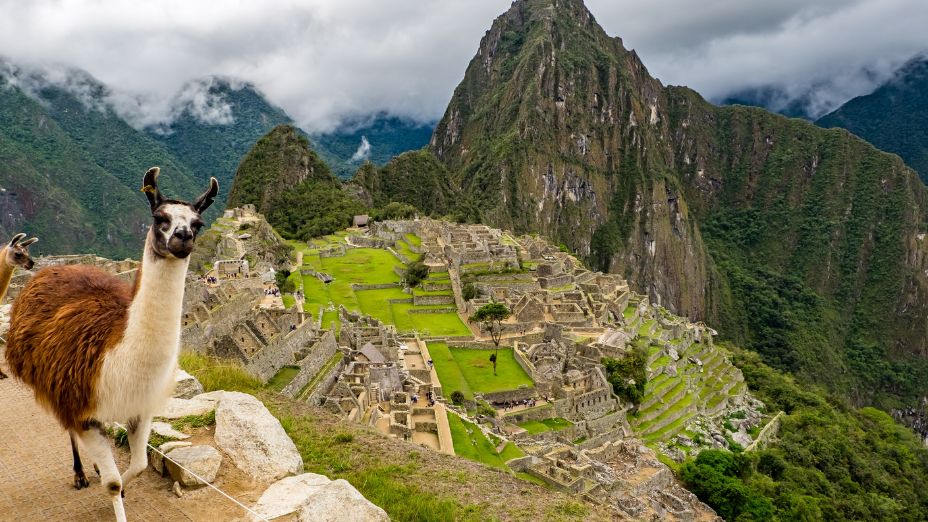 What Is Peru Known for & Famous For?

Machu Picchu is the first holiday destination that comes to the minds of many when you mention Peru. But this country is graced with many other notable landmarks and cultural sites that make it famous across the world.

Peru is famous and known for:

In this article, I will discuss each of these items and explain their uniqueness to Peru. By the end, you’ll have a new picture of Peru and many more reasons to visit this wonderful country.

Machu Picchu is an archeological site and Peru’s most prominent tourist destination. It’s a UNESCO World Heritage site and one of the Seven Wonders of the World, receiving over one million tourists annually.

Machu Picchu lies above the Urubamba River over the Andes Mountains and is believed to be the most well-preserved abandoned Inca settlement. It was built in the 15th century and later abandoned in the 16th century when the Inca residents left to aid in the war against the Spanish invasion.

2. The Sacred Valley of the Incas

The Sacred Valley of the Incas is one of the most visited destinations in South America. It houses pre-colonial settlements like the Maras community and ancient Incas citadels such as Chinchero and Pisac.

Located in Urubamba province, 15 kilometers northeast of Cusco City in Peru, the Sacred Valley of the Incas served as the Inca’s most agriculturally productive territory. The Incas cultivated crops such as:

The Inca Trail is Peru’s iconic trekking route, snaking through the Andes and ancient Incan ruins and terminating at the famous Machu Picchu. Trekking the Inca trail offers tourists unique and rare views of the snow-capped summit of the Andes.

Historians believe it was a pilgrimage route to the Machu Picchu. Other sources claim it was also the primary transportation route connecting the many Incas settlements that dotted the area.

You can organize a 4-day hiking trail with your friends and pass through a handful of archaeological ruins along the path. You’ll arrive at Machu Picchu on the fourth day through the Sun Gate.

The Inca people arrived in the Andes region around the 12th century. They established a thriving kingdom ruled by powerful emperors and military forces.

Their state consisted of about 100 ethnic tribes totaling 12 million strong. At the time, it spanned from northern Ecuador through the Andes to central Chile.

The Incas maintained well-organized transportation systems, agricultural practices, religion, and language before their empire collapsed in 1572 after the Spanish invasion.

The Peruvian Andes divide the country with a series of snow-capped mountains that have had a great influence on the country’s agriculture, history, culture, and geography. The Andes are the tallest mountain ranges outside Asia and the longest in the world.

Peru occupies the central Andes. It makes for an ideal area for hiking to Machu Picchu, trekking the Sacred Valley, or enjoying boat rides at the lake Titicaca.

A few years ago, some tourists lost in the Vinicunca mountains discovered the Rainbow Mountains of Peru, which have since become a popular tourist destination. Towering at 1584.96 meters (5200 ft) above sea level, the mountains offer some of the most picture-famous spots in Peru.

Peru enjoys the popularity surrounding the Amazon jungle. 13% of the Amazon rainforest sits in Peru, and its second-biggest portion, 60%, sits in Brazil.

Perto Maldonaldo and Iquitos are the two best places to experience the Amazon jungle in Peru. Iquitos isn’t connected to the rest of Peru by road—you can only get there by plane or boat. It’s a good place if you want to experience the isolation of the Amazon.

Sitting in the Andes at the heart of Peru, Cusco is one of Peru’s most popular tourist destinations. It once served as the Inca empire’s capital. Inca rulers Tupac Yupanqui and Pachacuti founded the city in the 12th century, gradually becoming the empire’s cultural and political center.

Cusco is an excellent place to begin your trip to the Sacred Valley and visit some Inca settlements such as Ollantaytambo and Moray.

Cusco was the “navel of the world” to the Incas, but Lima slowly took over to become the heart of Peruvian Civilization during the Spanish colonization.

Lima is a buzzing metropolis boasting 10 million people and provides tourists with a twisted blend of colorful cliff-hanging settlements and trendy restaurants. When visiting Peru, walk around the city’s streets to enjoy the Peruvian culture and shopping.

Ollantaytambo is believed to have been a strategic Inca military fortress that also served as an agricultural and religious center. Imposing stone buildings standing four-meter high overlook this archaeological zone that still preserves its canals, streets, and buildings.

Historians also believe that Ollantaytambo was a refuge for Inca’s nobility and royalty. The Incas had to use top-notch engineering skills and wisdom to divert the water channel around them and transport the massive rocks used to build the fortress.

Ollantaytambo is located 80km (50miles) from Cusco and 40km (25miles) from Machu Picchu.

The Andes Mountains never stop giving, from snow-capped rugged terrain to the second deepest canyon in the world: the Colca Canyon.

Colca Canyon is about 4.5 hours away from Arequipa city, and the locals regard it as the natural habit of the condors. Tourists can hike the canyon either on a two-day or three-day hiking circuit that begins at the top to the canyon’s bottom and goes back up.

I recommend getting acclimated to high altitude before attempting this hike. You’ll need to hike about 3200 meters (10,498 ft) for a trek in the Colca Canyon.

Nazca lines are Peru’s and the world’s most fascinating and mysterious archaeological sites. They date back to 500 BC.

The Nazca lines are geoglyphs composed of shapes of various items, including:

The purpose of these geoglyphs remains largely unknown, with some theories pointing to religious and navigation uses while others suggesting that they were mainly created for astronomical purposes.

Surprisingly, some believe that extraterrestrial beings made the Nazca lines. Although this possibility isn’t really on the table, it speaks to the fascination the Nazca lines impress upon people.

The Peruvian landscape is diverse, from warm sandy beaches and the Amazon jungle to snow-capped and colorful mountains. In stark contrast to the green landscape is the dry and lifeless desert in the Ica region. And yet, in the middle of the world’s most bizarre dunes stands a small desert town Huacachina.

The dunes tower about 100 meters (330 ft) above this town with a small lagoon at the center, offering some of the rarest sandboarding sites in South America.

The harmony of the sunset hues and the colors of the dunes will leave you asking whether you’re dreaming.

Located near Huaraz city in Peru’s Ancash region, Lake 69 is the equivalent of Lake Louise and one of Peru’s UNESCO World Heritage Sites.

Although it’s challenging to reach Lake 69, a 75-minute flight from Peru’s capital Lima is worth the view of the stunning glacial mountains surrounding the lake. You can visit the area in the warmest season, from May to September.

Its high altitude gives travelers a unique destination to view its stunning shores and the surrounding glaciers and mountains.

The lake is also home to the famous floating villages in the Uros islands. When visiting the area, don’t forget to get a glimpse of the Peruvian tradition.

The Andean steppe offers a genuinely unique Peruvian experience. It calls for a keen eye to tell apart the four camelids. The primary differences are in their hair or fleece and body size.

Alpacas are stockier and smaller with softer fleece, while Vicuñas and Guanacos have much finer wool. However, Guanacos are way larger.

Peru is home to 70% of the world’s alpaca population. The animals are considered sacred, and their fiber produces the world’s most favorable fabrics. The alpaca fabric is lightweight, and its numerous air pockets make it extra warm. It’s why it finds many uses in clothes manufacturing.

If you’re an avid traveler and into exploring unique cultures, architecture, and textiles, you’ll be blown away by the colors of Peruvian textiles.

I bet you won’t get enough of their vivid hues and patterns. If you stroll the streets of Lima, you’ll find your mouth always open with wonder, loving the beauty of these centuries-old textiles.

Peruvian textiles were traditionally a form of art, but over the centuries, they evolved to become the original designs and styles we see today.

It would be an injustice to mention Peru and fail to mention ceviche, a popular dish that’s quickly turning Peru into a top destination for culinary enthusiasts.

Peru is famous worldwide for its mouthwatering seafood, and ceviche tops the list. It’s prepared with raw fish marinated in lime juice and served with a fried potato side dish, onions, and roasted corn.

Include ceviche on the list of ‘must-sees’ when you visit Peru.

The fact that guinea pigs aren’t pets but rather a delicacy is perhaps one of the fascinating things about Peru.

You should know that the cute and fluffy pet has been a constant source of food for Peruvians for many years. Historically, the Incas bred them for food because they reproduced at high rates and were easy to maintain. Guinea pigs provided the Incas with a steady source of protein.

Today, this unique Peruvian dish attracts food enthusiasts from all walks of life to Peru.

You can be sure your tour of Peru won’t be complete if you don’t try the Pisco Sour. It’s a Peruvian alcoholic beverage that has become popular worldwide because of its taste. Pisco is considered a type of brandy, while the term sour comes from the flavor added by citrus juice. It’s Peru’s official signature drink, although it’s also manufactured in Chile.

You’ll be shocked to realize that Peru is home to about 4,000 varieties of potatoes. And you guessed it right: you can’t name five of them straight from your head.

Peru’s diverse climate enables crops like potatoes to thrive. And to Peruvians, potatoes have become more than a crop, but a heritage. Historians believe ancient Peruvians domesticated the crop more than 10,000 years ago. Today, it’s common to find potatoes given as gifts in ceremonies and celebrations.

Inca Kola is Peru’s indigenous and national soft drink made from lemon verbena. It still retains its 100% Peruvian taste despite Coca-Cola partly owning it since 1995. It has a distinctive golden hue similar to that of bubblegum.

One fascinating thing about Inca Kola is that no one can say what the drink tastes like. Some say it tastes like cream soda, others bubblegum, and others lemon verbena.

Quinoa is a superfood that has been Peru’s staple food for millennia. It’s a grain crop with tons of nutritional benefits.

Peru is the top global producer of Quinoa, so don’t forget to get a taste of the grain while you’re in Peru.

Peru is a famous South American country with a diverse landscape and rich culture. Its history stretches back several millennia.

From the famous Machu Picchu to the Andes snow-capped peaks and the UNESCO World Heritage sites, there are plenty of things to make your trip to Peru an unforgettable experience.