““Cat Got Your Tongue” – The Origin of the Phrase 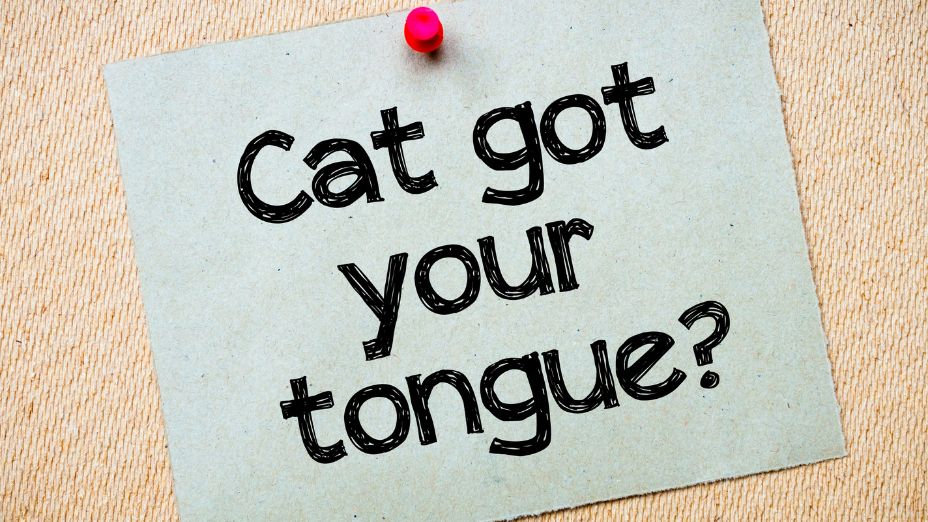 The Origin of the Phrase “Cat Got Your Tongue”

Regardless of whether you’re the silent, soft-spoken type or always the loudest in the room, there’s no doubt that you’ve probably heard the phrase “cat got your tongue?” at least once in your life. But have you ever wondered where the saying comes from and what it means?

The phrase, “Cat got your tongue?” has no definitive or verified origin. It is theorized to have come from numerous places and times, such as Ancient Egypt, the 17th century British Navy, or even medieval times. The first written record of the phrase only dates back to the mid-19th century.

While there is no certainty surrounding the root of the expression, the suspected reasons for its conception and use are nothing short of fascinating and highly believable. If you’re looking to understand these theories and the term’s historical and modern usages, meanings, and interpretations, read on.

The Suspected Origins of the Phrase “Cat Got Your Tongue”

As previously mentioned, and according to reliable sources, there are no definitive answers as to where the idiom originates. However, this fact has not stopped historians and cultural theorists from estimating and deducing the most feasible ancestry of the expression.

Some historians say the phrase is no more than a childish saying, depicting cartoonish imagery to appeal to youth. However, this isn’t the only explanation for the phrase’s intent. As it happens, most (if not all) of the saying’s expected roots feature far darker, brutal, and grotesque stories than most people would presume.

The primary reason most of these ideas lack legitimacy is due to the absence of physical records. The earliest written form of the phrase is from a newspaper article in Wisconsin, U.S., in 1859. I will detail the history of its usage later in this article.

There are three prominent accepted theories on the phrase’s origin, as neatly featured in this YouTube video by Literal Phrasing:

These supposed origins include:

Of course, there is an abundance of background to each of these understandings, so below is a brief run-down on each.

The Ancient Egyptian Routine of Cutting Out Tongues

In the culture, religion, and mythology tied to Egypt, people have always maintained an undying devotion to cats. The recorded association between cats and Egyptian gods such as Ra, Bastet, and Sekhmet, among others, caused the people of Ancient times to practically worship them.

The Egyptian love for the feline kind was renowned throughout history, as they believed them to be divine protectors and bringers of great fortune. Any offerings to them were considered an offering to the gods themselves. Because of this, the population of cats throughout Egyptian territories was immense—there were always cats around.

What’s more, Ancient Egypt featured a historically brutal system of justice, hence the practice mentioned above of cutting out a criminal’s tongue. If one were to act against a person or the state, the government would punish them in such a way.

Once a lawbreaker had their tongue sufficiently relinquished, the Egyptians thought the felon could never commit an offense again. The tongue was then offered or fed to a cat. The people of the time considered this to be the absolvement of the convict’s acts before the very gods.

The expression “cat got your tongue?” could have come from this ancient routine, whether through direct cultural conception or later referential use by foreigners of the culture.

The Cruel and Silencing 17th-Century Cat-O-Nine-Tails

The cat-o-nine-tails was a ruthless tool created and used as means of torture and punishment in the 17th century. The weapon, consisting of 9 callous whips attached to a solid handle, usually of metal or wood, has been used consistently throughout history.

According to the Science Museum Group, the cat-o-nine-tails, or Cat O’nine Tails, was in use in the British Navy from the 1700s to the mid-19th century. Captains and leading sailors utilized the tool to punish or discipline unruly sailors. This is just one example of the device’s use throughout history.

It is said that the pain caused by a “cat-o-nine-tails whipping” was so immense that it often crippled or subdued the victim to the point of being unable to speak.

The phrase in question likely originated from this practice, thought to have been spoken sarcastically by sailors to whoever was unfortunate enough to receive the treatment.

There’s no denying that this theorized origin of the casual phrase is dark. However, given the proximity of time and use, most theorists claim this is the most believable and founded origin story for the expression. Still, there is no way to definitively know that this is the root of the phrase.

The Superstition of Feline Witches That Stole Tongues

Lastly, some historians believe that the idiom “cat got your tongue?” can be traced back most accurately to the middle ages. Primarily, this refers to the hysteria-ridden and superstition-riddled era of the dark ages.

In these times, people, be they peasants or members of the church, feared all things supernatural, such as ghosts, demons, devils, and most relevantly, witches. It’s no surprise that the superstition surrounding this time period extended to cats.

As explained by PBS, due to the influence of literature, speculation, and the extensive rise of Christianity at the time, the world’s perception of cats swiftly evolved from a fondness to fear. The population saw cats (especially black cats) as devils, demons, and familiars to witches and wizards.

A common notion of the time was that witches would often disguise themselves as cats in order to do their evil deeds. If you were unlucky enough to witness this or fall in their way, the witch would steal your tongue to ensure that you couldn’t tell anyone about what you saw.

It is this belief that historians think to have founded the titular saying. These people were afraid that the cat would have their tongue in a literal sense.

Historical Usage of the Phrase “Cat Got Your Tongue”

As mentioned at the beginning of this article, while the many theories on where the expression comes from are feasible and based on reason, they are not verifiable without physical evidence or written records.

As far as we know, the earliest written record of the phrase is from a newspaper article from 1859, Wisconsin. In this instance, it was used casually by one person when another failed to respond to a remark about the weather. Most cultural theorists believe that its casual use in a newspaper alludes to the conception of the phrase coming from the U.S., as opposed to places like Egypt or over the seas.

Other notable cases of the expression appearing include a magazine excerpt from 1881, mentioned by Grammarist. The article describes it as a “taunt used by children,” which places the likeliest origin point in more recent centuries with a more domestic, less gruesome backstory.

Other reputable sources place the first written record of the phrase in the 20th century. Oxford Academic claims, “The earliest written example of the phrase “cat got your tongue” in the Oxford English Dictionary is from 1911.”

While it is reasonable to assume that the phrase “cat got your tongue?” has been interwoven throughout much of history with a very unclear origin point, we can only be sure of its conception from around the mid-19th century at the earliest.

Modern Usage of the Phrase

It is interesting to note the usage of the phrase “cat got your tongue?” has significantly declined over the past few decades. Some people go as far as to label the term as outdated or archaic.

It has seen slight variation as of late, as the phrase instead becomes “Cat caught your tongue?” or “Has the cat taken your tongue?” to name a few. However, the refined and original expression, and each of its alternatives, have still sunk in relevance since around 1960-70.

Nowadays, the most use of the idiom is seen through referential labels and titles, harkening back to its traditional use.

It can also be considered rude or offensive in today’s social and cultural standards – mocking someone for not speaking has fallen out of fashion to blatant rudeness.

We could never know precisely where or how the phrase “cat got your tongue?” was conceived. Despite the numerous compelling or well-reasoned theories—in which one or many may well be true—none are definitively verifiable.

The earliest we can attribute the origin or use to is around the mid-19th century, the time surrounding the first physical written record of the idiom in question.