Top 11 Things Thailand is Known For 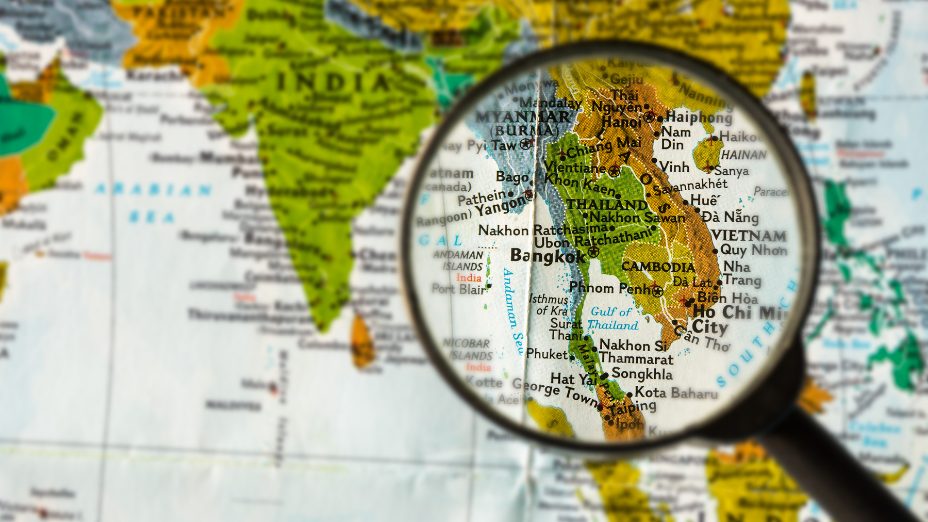 What Is Thailand Known For?

Thailand is one of the major tourist hotspots in the world. It records millions of visits every year, primarily because of its vast landscapes, beautiful islands, majestic temples, and rich history. However, some other fascinating things endear people from all over the world to this country.

The rest of this article will explore the different cultures, practices, places, resources, and other things Thailand is known for and why it should be on your travel bucket list. Let’s get started so that you can start your vacation. 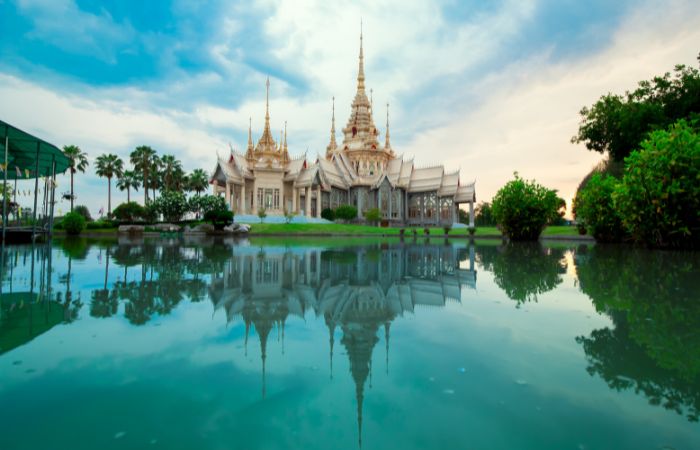 Buddhism is the primary religion of the Thai people, and it is believed that almost 95% of Thais are Buddhists. As a result of the predominance of this religion, Thailand has more than 33,000 temples, according to the Office of National Buddhism.

Buddhist temples in Thailand are a marvelous sight to behold. Each has its unique features. You don’t need to practice Buddhism before you can appreciate the stunning architecture of each temple.

Third-class temples include the Wat Tha Luang in Phichit and Wat Si Khom Khom in Phayao are also impressive and worth visiting. 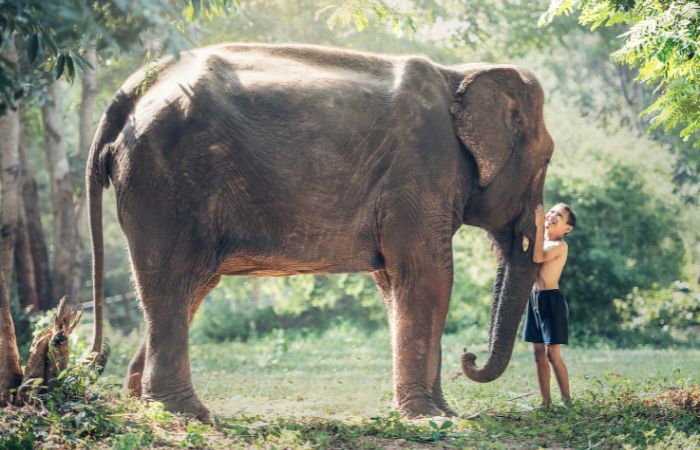 There are only about 3,000 to 4,000 elephants left in the country, with half being domesticated and the rest living in National Reserve Parks. Young calves are usually captured and trained for tourist shows.

Also, some of the animals are domesticated to help maintain their population, while the rest are scattered throughout the country.

If you’re considering visiting an elephant sanctuary in Thailand, be sure to research properly to ensure they are legitimate. You may also visit the Khao Yai National Park, which offers an excellent opportunity to see these animals in their natural environment. 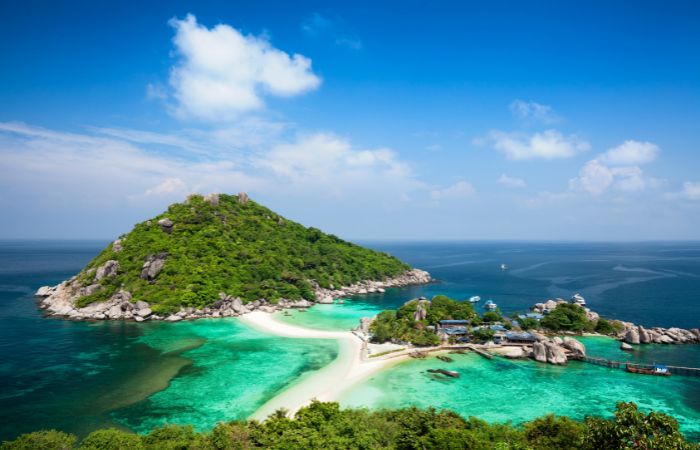 Some parts of the country are mountainous while others are lowlands with rich isthmuses.

The riverine portions of the country have several small islands that are worth exploring. Each island offers its unique properties, but many of them combine rich vegetation, clear waters, and high reliefs that provide a huge sense of privacy and calm to their occupants.

Only one of the islands is inhabited, and that is Phi Phi Islands. Here, tourists have access to restaurants, bars, shops, night parties, and a host of other unforgettable experiences.

But if you want wildlife, peace, and quiet, and the cool breeze from the waters as a company, there are several other islands you might want to visit. Like the Koh Chang, some of these islands are challenging to reach, helping to preserve their beauty and serenity.

Phuket is another beautiful island and is one of the largest and most suitable for family getaways as it is easy to reach with many fun activities for all. 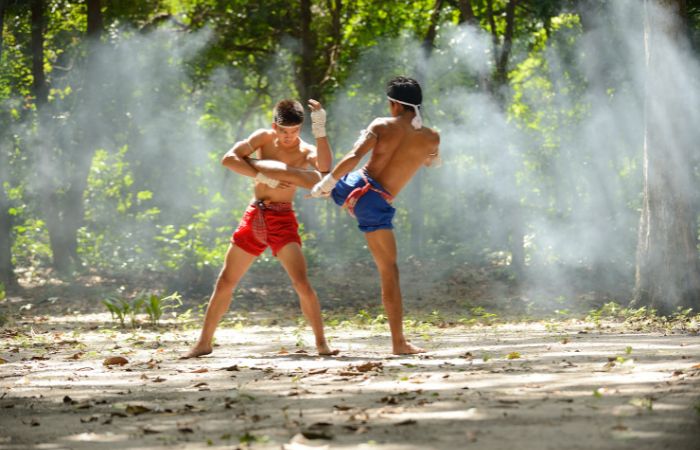 Muay Thai, also called Thai boxing, is a popular combat sport in Thailand. It is an old sport, but many of its techniques have been adapted into modern combat sports such as kickboxing.

It is also called the art of eight limbs because it involves all limbs and the elbows, shins, and knees. Although the technique is used in other combat sports, where else would it be fascinating to see it practiced if not in its place of origin?

Its place in the history of Thailand adds more to it than the regular fighting technique we all know. Its history began in the 16th century when it was practiced as a martial art by the army of King Naresuan, and it was used during wars between kingdoms of Thailand in the past, making it more than a mere combat sports fighting technique.

The headband is traditionally torn from a loved one’s cloth, usually a mother’s sarong, and worn around the head to ward off evil spirits. However, in recent times, fighters are presented with the headband as a representation of their gym.

It is common practice for fighters to present their mongkol to monks, even if they are not Buddhists, to bless it. The headband is usually removed from the fighter’s head and placed at a corner of the fighting ring.

Before the end of your trip to Thailand, you can visit any Muay Thai training center to learn the art and brag about it at home. The training cost is typically around $600 per month, but it will also depend on the training camp and their available packages. 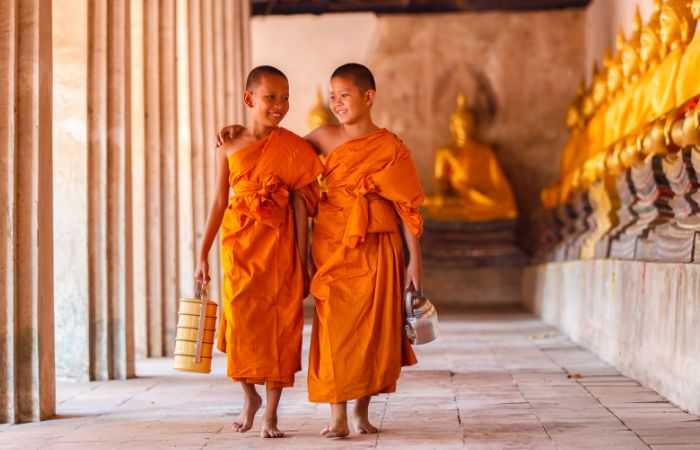 The Thai people are so friendly that the country was dubbed the “Land of Smiles.” Although some people consider the nickname a marketing gimmick to lure visitors to the country, it isn’t. This beautiful country is indeed full of smiling faces.

Everywhere you go, from the locals on the street, the police, the taxi driver, to the waiter at the restaurant, you’ll immediately notice how friendly they are and how easy it is to have a conversation with them.

Thais are also very helpful and will go to extreme lengths to make life easier for foreigners in their country. And the most incredible thing about their helpfulness is that they do it without any pretense or ulterior motives.

Whether you’re visiting for the first time or the fifth time, the Thais will welcome you in the warmest way possible and ensure you have a wonderful experience. 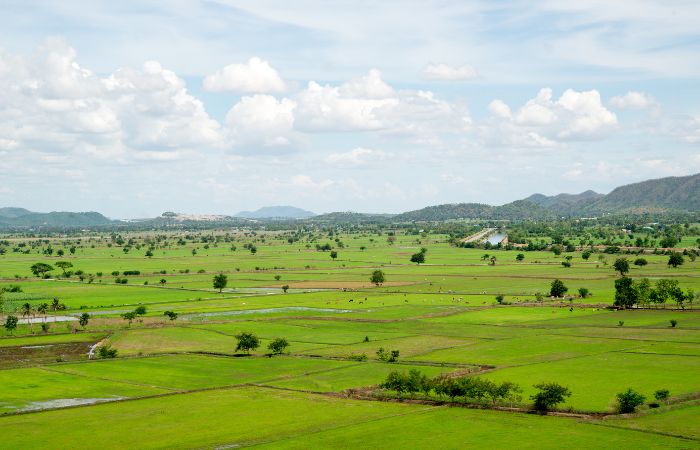 Being one of the leading global exporters of rice, Thailand has a lot to show the world in rice production. Agriculture is the primary source of income for most people in the country, as about 49% of the labor force is involved in agriculture.

Formerly, the population of the workforce in agriculture was 70%.

Thailand depends on agriculture for almost 10% of its GDP and produces other crops such as rubber, soybeans, cassava, corn, cotton, tobacco, peanuts, cocoa, and cashew. It also gains a large part of its GDP from raising livestock, especially dairy animals, and growing medicinal and ornamental plants.

Its vast agricultural industry, which used to depend on traditional farming practices, has evolved into a mechanized and modern agriculture system.

This development is one of the reasons for the decline in human labor involved, as most of the jobs are now mechanized and computerized. However, it does not explain the decline in rice production.

Thailand’s agricultural industry is an avenue for tourists to learn and see first-hand the agricultural practices of Thais that make them successful rice farmers. They are top producers in most of the crops they export. 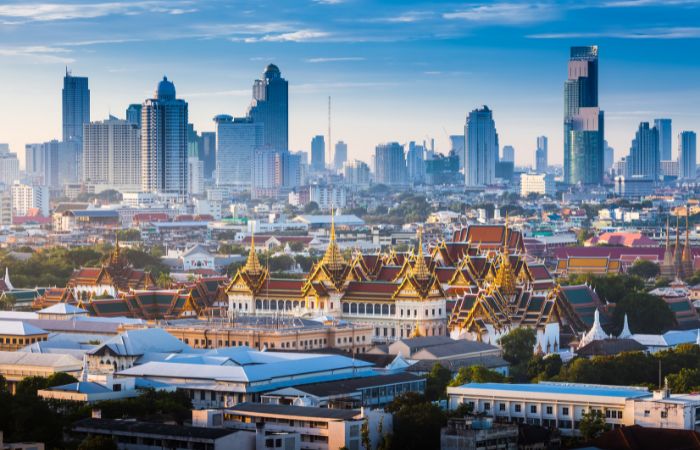 According to the Malaysia Healthcare Travel Council, Thailand is the fourth biggest medical tourism destination in the world. This ranking is partly due to the affordability of medications in the country, which has saved so many lives.

The country also has the highest number of internationally accredited health organizations in South-East Asia. The state capital of Thailand, Bangkok, alone, has more than 20 hospitals with the Joint Commission International (JCI) accreditation.

This accreditation has resulted in a positive impact on the quality of the healthcare system.

The impact can be seen in many poor African countries where it is difficult to get antiretroviral medications (ARV). One of the ARV medications produced by scientists in Thailand is considered the cheapest.

Another reason for the high influx of people for medical attention is the short waiting time.

Patients don’t have to wait long in line for treatment as they may have to in their home countries. That, coupled with the affordability of the medical treatment, are some of the main reasons why.

Thailand also has many internationally qualified doctors and surgeries that are part of the hospitals that possess the international quality benchmark. Also, medical tourism in Thailand isn’t just about getting treated for whatever ailment you’re suffering from; it’s also about having the best convalescing experience.

Although there are excellent doctors and healthcare professionals in the hospitals, the hospitals’ environments are more like luxury hotels, aiding in speeding up patients’ recovery. 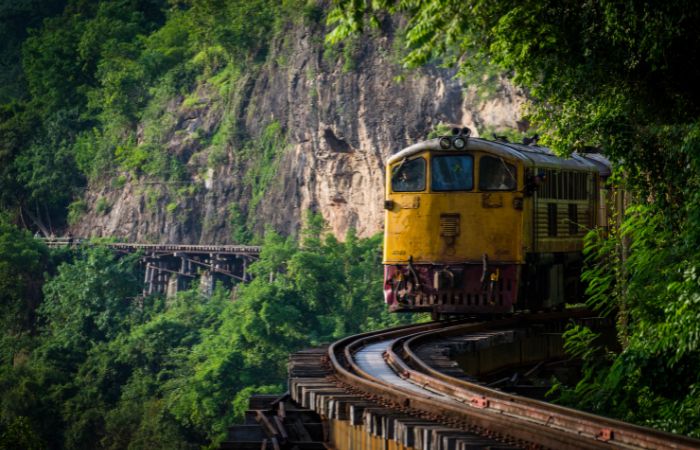 Although Thailand is widely known for its solid agricultural presence globally, it also owes its economic success – especially the economic recovery that started in 1999 after the Asian Financial Crisis – to exporting several goods and services.

The export of manufactured goods such as cars, footwear, textile, computers, and other electrical appliances contributes about two-thirds of the country’s gross domestic product.

Also, Thailand’s automotive industry is the largest in Southeast Asia and the 9th largest in the world.

With the massive production of oil palm, rice, rubber, and other agricultural produce, the economy is heavily reliant on exporting these goods and services. 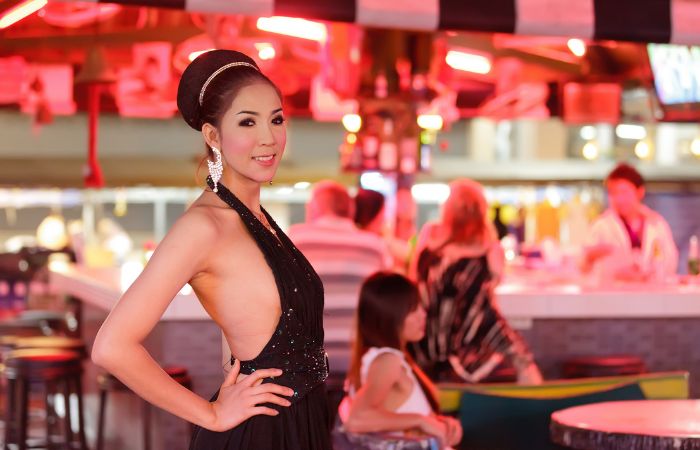 Tourism generally accounts for about 6% of the country’s income, and the sex tourism industry contributes significantly to that number. Although prostitution is illegal in the country, there is almost no stand against it.

Corruption among the police, which should be enforcing the laws against prostitution, and a high rate of poverty among the people, make prostitution rife in the country.

Although it is believed that foreigners contribute the most income through sex tourism, as Thailand has garnered a reputation for that since the Vietnam war, there is a larger prostitution ring that caters to the sexual need of locals. 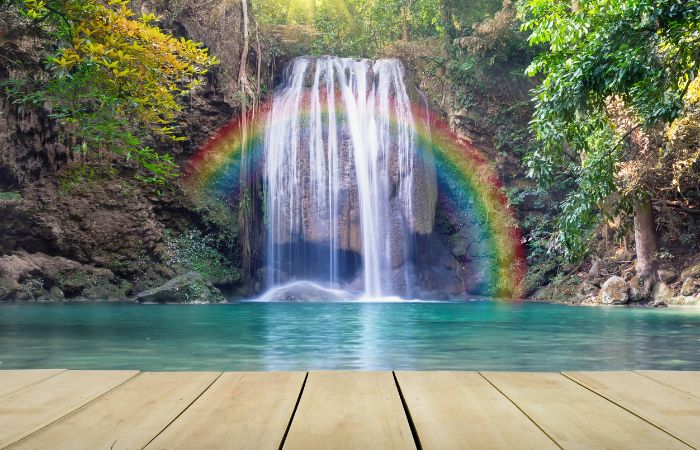 Thailand is the place for many looking to escape to South East Asia, it is the biggest entry point for backpackers and tourists looking to explore the region. Thailand has become a beacon for travelers looking for adventure with lush green jungle, crystal clear water, party islands, and so much more.

Thailand is the entry point for most travelers looking to explore this fascinating region of the world with friendly and welcoming people, amazing foods, and a relaxed and fun atmosphere that is hard to find anywhere else in the world. 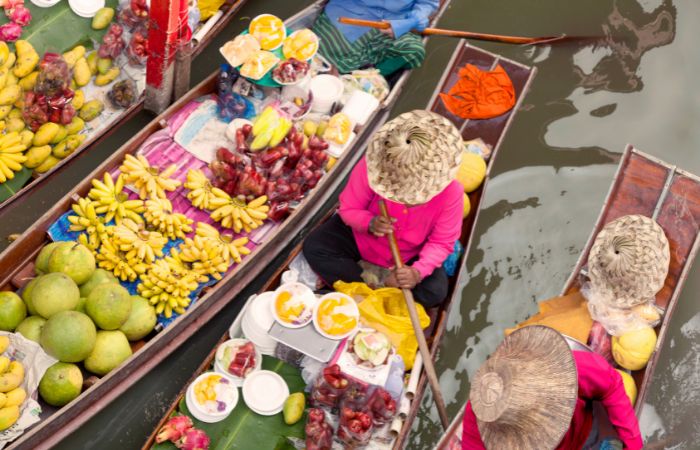 Thailand is known for having some of the best food in the world, and street food is just mouth watering thinking about it.

Thailand has left a mark on the world for many different reasons but the tastiest one is by far the food that originated in the county. Some of Thailand’s most famous foods are.

Just to name a few of the tasty Thai dishes out there. And the best place to find a great deal of these items are from the street food stalls that are all over the place. Food stalls aka street food

Food stalls can be pretty much found on every corner of the country.

Thailand is a foodie’s paradise. 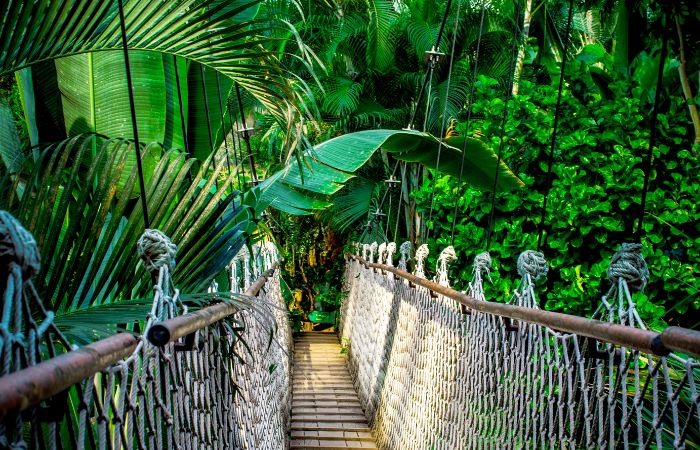 If you were wondering whether Thailand is worth visiting, you have our verdict now. Yes!

The country ticks the box in almost everything a tourist wants and offers a great yet affordable vacation experience.

The friendly and helpful locals will ensure you have a great time exploring the stunning islands and beaches, ancient temples and shrines, and several other things in this beautiful country. It’s not too early to start planning your trip to Thailand!

Be sure to check out this guide to help you plan your trip.