Top 20 Things Memphis is Known For & Famous For 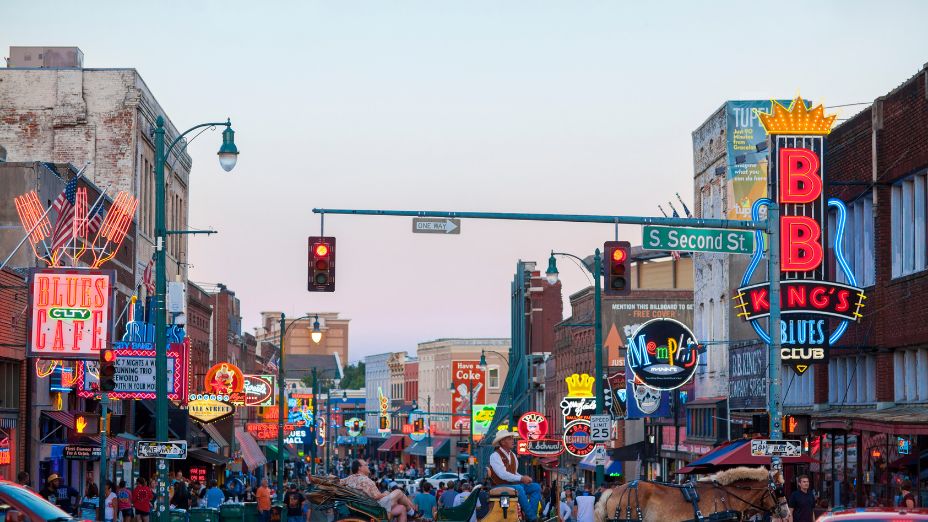 What Is Memphis, Tennessee Known For?

Memphis, Tennessee, is one of the most well-known cities in the south with a rich history and exciting culture. Built on the eastern banks of the Mississippi River, it has a lot to offer for both visitors and its residents. So, what’s Memphis known for?

Memphis is known for its rich music heritage and its impact on Blues, Rock-n-Roll, and jazz. It’s also a major producer of cotton and lumber. Plus, it’s home to the NBA team the Memphis Grizzlies, and many other sports teams. Memphis-style barbeque is also one of four major barbecuing styles in the US.

Read on to learn about the rich cultural, musical, historical, and medical aspects of Memphis, Tennessee. 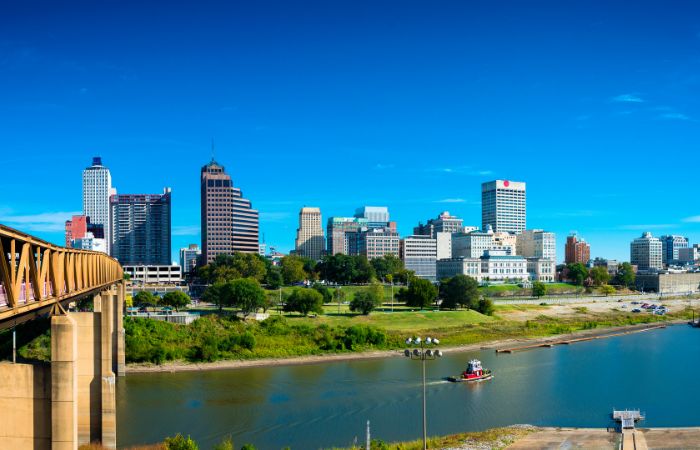 Memphis Is Known for Its Lumber Industry

Memphis is the largest and the most populous city in Tennessee, lying on the Chickasaw bluffs located along the east bank and the widest part of the Mississippi River.

Thanks to its rich delta soil, Memphis is famous for its cotton and lumber productions, making it one of the main markets of these products in history. In fact, it’s famous as the Hardwood Capital of the world, providing lumber for furniture makers in all parts of the country.

Weather/Climate Memphis is Known For

Memphis has four distinct seasons with a humid and mild subtropical climate and the temperatures reaching 28.2 °C (82.8 °F) in the summer and 5.6 °C (42.1 °F) in the winter. The moisture that rises from the Gulf of Mexico makes the city a high-humidity area.

In 1819, Andrew Jackson, James Winchester, and John Overton founded Memphis, naming it after the ancient Egyptian city of Memphis, meaning Enduring and beautiful. The first settlers in Memphis were Indigenous Americans living along the river bluffs for 10,000 years before giving full control to new settlers in 1818. 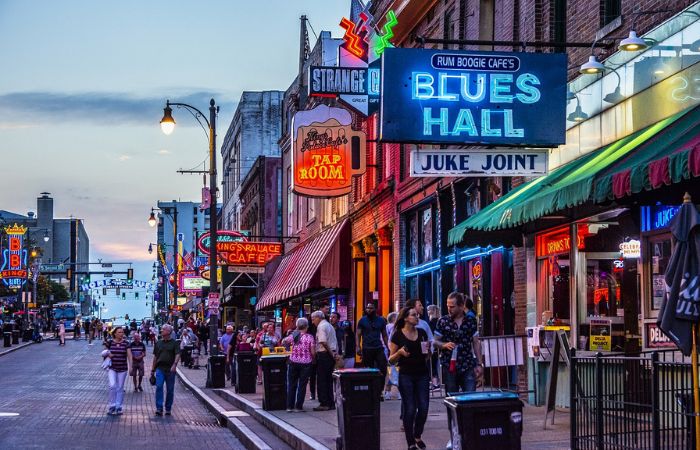 The City Has a Thriving Cultural Scene

Memphis is famous for its rich culture, pioneering in many aspects of music and art. Thanks to the city’s rich history, many museums and art galleries make the city one of the most important cultural hubs.

The city has played a profound role in soul, blues, gospel, and Rock-n-Roll music. Many musical legends started their recording careers in this city. That’s why you can see the influence of music in every corner of Memphis.

This rich musical heritage has made the city the subject of many country-style and pop songs, including:

Here are some of the most renowned cultural and musical landmarks in Memphis: 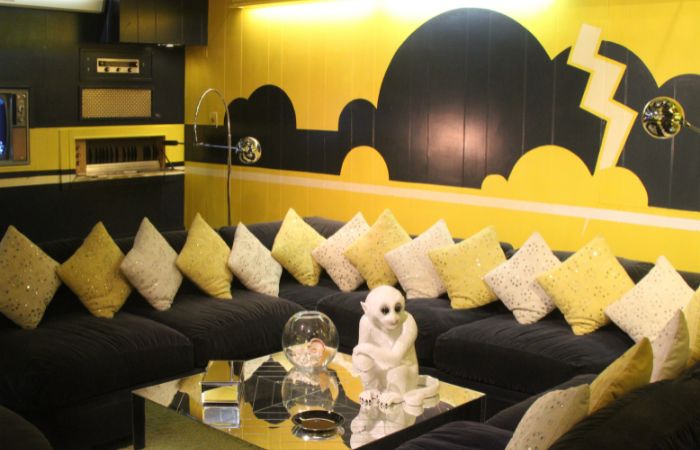 Graceland is the home of Elvis Presley, which transformed into a museum in 1982. It has 700,000 visitors on average every year, with 20 percent of them coming from other countries. This number makes Graceland the second most visited American home after the White House.

It has been in the National Register of Historic Places since 1991 and a National Historic Landmark since 2006.

It’s located 8 miles south of the urban center of Memphis and covers a land of 13.8 acres. The two-story building has 23 bedrooms, where Elvis Presley and his family lived from 1957 until it became a museum and opened to the public.

Every August, Memphis celebrates the annual Elvis Tribute Week, with thousands of fans pouring into Graceland. During this week, about 50 events celebrate the king of Rock-n-Roll’s legacy, including contests, parties, and tours to different parts of Graceland.

The Memphis Rock-n-Roll Soul Museum, first opened in 2000 by the Smithsonian Institution, exhibits rock-n-roll and soul music history. It allows the visitors to explore the roots of these two music genres and the role of Memphis in their development.

The museum features seven galleries with a whole range of exhibits, including costumes and instruments, three audio-visual rooms, and a digital tour featuring 100 rare early songs. The audio tours tell the stories of those people who paved the way for Rock-n-Roll and soul music to be born and reach their summits. 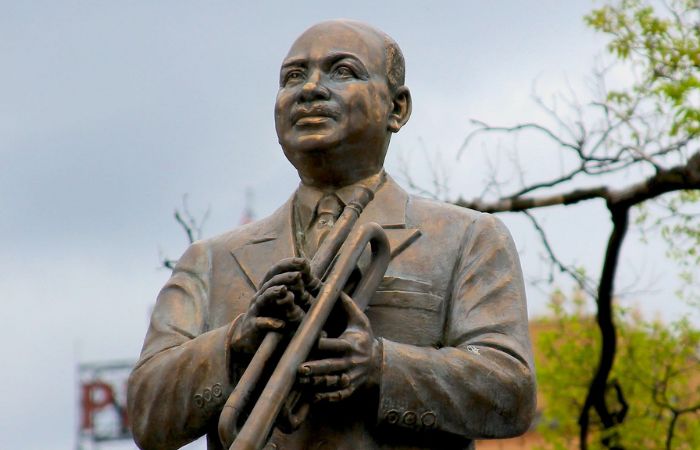 The Memphis Brooks Museum of Art is the biggest museum in Tennessee, founded in 1916. With more than 10,000 works of art, the museum features 29 galleries, an auditorium, art classrooms, a research library, and a print study room.

Beale Street is America’s most iconic street and a National Historic landmark located in downtown Memphis. It’s the birthplace of blues where many famous artists, such as B. B king, started their careers. In addition, it was a place for traveling musicians to gather and perform in the 1860s, leading to the development of the street with more clubs and shops.

The father of blues, W. C Handy, wrote his first commercial blues tune in a bar on Beale Street in the early 1900s.

As the most famous tourist attraction in Tennessee, Beale Street is where Elvis Presley bought his iconic outfits.

The street is packed with blues-themed restaurants and clubs and has turned into an outdoor exhibition of blues history. 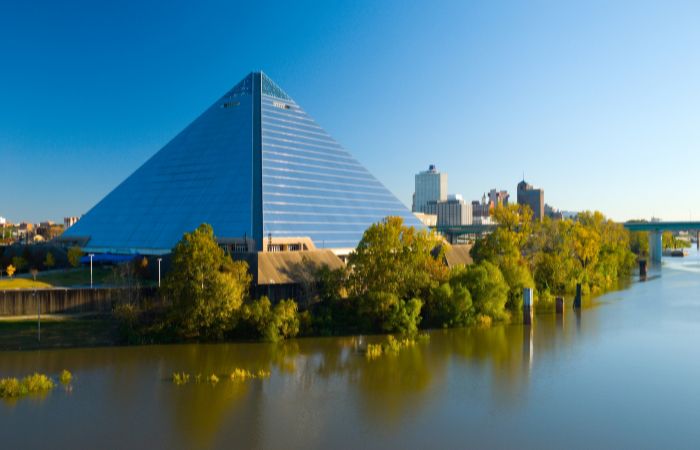 The Memphis Pyramid is a nod to the fact that the city is named after the Egyptian city of Memphis. The Pyramid was originally constructed in 1991 as a sports arena. It was the home court of Memphis Grizzlies and hosted basketball tournaments, boxing events, and concerts.

Now, it’s a Bass Pro shops Megastore along with an aquarium, a shooting range, a laser arcade, and an archery range. It also features the tallest freestanding elevator in the US, taking visitors to the Pyramid’s apex.

The museum features ten galleries, each with interactive touch screens allowing the visitors to hear the music and listen to the personal stories of each inductee.

Sun Studio is a National Historic Landmark also famous as the birthplace of Rock-n-Roll. Many musical genres, including blues, Rock-n-Roll, country, and Gospel, were born here. Plus, many musical icons, such as Elvis Presley, B. B. King, Jerry Lee Lewis, Charlie Rich, Johnny Cash, and many more, recorded their first albums.

The studio is a famous tourist attraction and a must-see for music fans. It hosts the tours in the daytime and functions as a recording studio in the evenings. The tourists can see priceless objects belonging to musical legends and hear their voices and unreleased tracks.

The museum’s building is a replica of the original Stax studio because the original studio was torn down in 1989. It also displays Isaac Hayes’ gold-plated Cadillac Eldorado. In addition, tourists can hear Stax hits by legendary artists, including “The Dock of the Bay” by Otis Redding and “Do the Funky Chicken” by Rufus Thomas.

For a more in-depth look at Memphis’ musical history check out this book on Amazon. 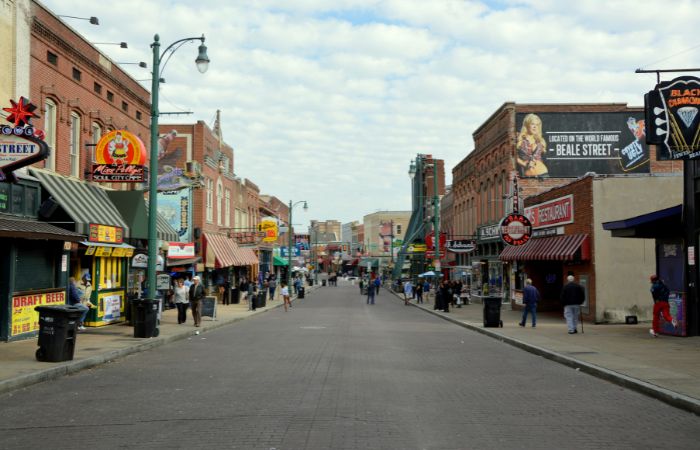 Memphis has played a major role in the anti-slavery and civil rights movements. Due to the thriving cotton industry, the city attracted many African-American slaves, changing the city’s face and making it one of the pioneers in the anti-slavery movement.

The following landmarks are famously linked to the civil rights movement:

The National Civil Rights Museum is a tribute to the influential role of Memphis in the fights for equality. It features 260 artifacts, interactive media, films, and oral histories covering the whole history of slavery, the Civil War, and Reconstruction.

Built on the original site of the Lorraine Motel, it’s where Martin Luther King Jr. was assassinated. It looks exactly like the original Lorraine Hotel in the 1960s, which was a non-segregated hotel back in the day. Visitors can also see the motel room where Dr. King stayed during the final hours of his life. 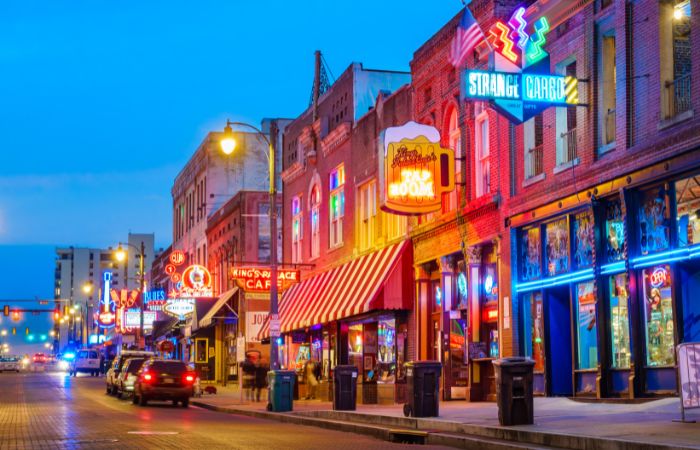 Another landmark commemorating the fight for civil rights, the Slave Haven Underground Railroad Museum, offers a journey through history. Also known as the Burkle Estate, whose owner favored the anti-slavery movement, it served as a refuge to the African slaves trying to escape slavery.

It features lots of secret passages to help refugees flee and artifacts, auctions, ads, and exhibits that show the living conditions of slaves. The 19-century house has a damp cellar where refugees stayed for days until a boat arrived to take them to the other side of the river.

It’s a walking museum that guides visitors through 20 blocks, going past many attractions such as Martin Luther King JR. Reflection Park, Beale Street, I AM A MAN Plaza and the National Civil Rights Museum. 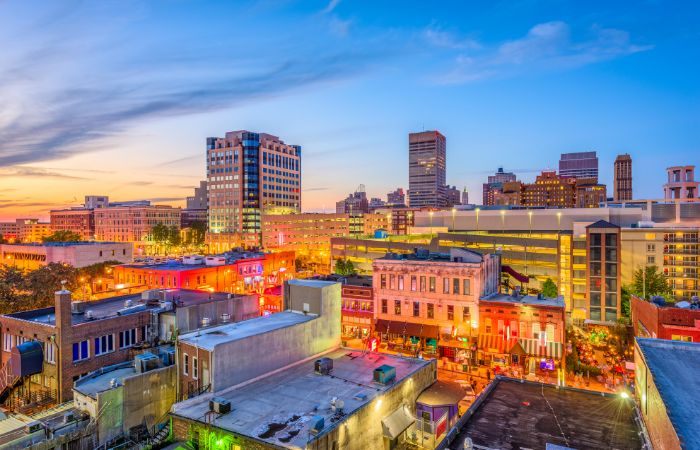 Memphis is home to many professional sports teams in basketball, soccer, and baseball. In addition to Memphis 901 FC in soccer and Memphis Tigers in Football, here are the most famous Memphis sports teams.

Memphis Grizzlies is the only professional basketball team in Memphis that plays in one of the Big Four leagues. The Grizzlies are a member of the NBA’s Western Conference Southwest Division playing their games at FedExForum.

The Grizzlies played in Vancouver from 1995 to 2001 when they moved to Memphis. They have given the nickname “Grit and Grind” to the city after the style of playing they came up with during the 2010- 2019 seasons. 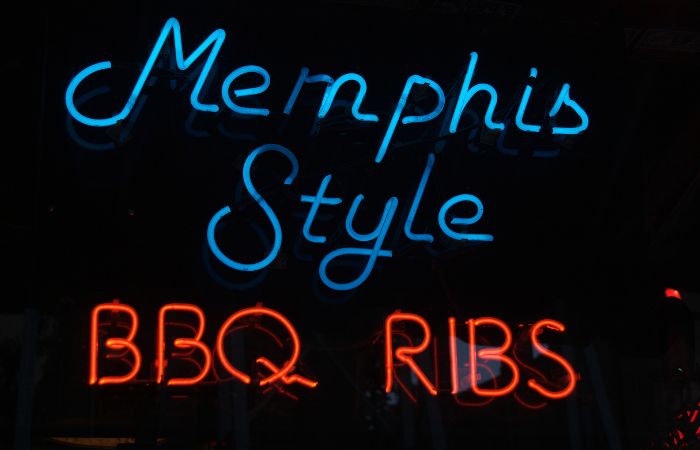 The City Is Known for Its Tasty Barbeque Style

Memphis is widely known for its unique barbeque style. It’s among the four primary barbeque styles in the US, the others being Texas, Kansas City, and Carolina. The main barbeque meat used in Memphis is pork, although you may see beef and chicken served in some restaurants. The best parts of pork for Memphis-style barbeque are pork ribs and pulled pork.

Another thing that makes Memphis barbeque unique is the distinctive rub that can consist of 40 different spices. However, paprika and garlic are the main ingredients used in rubbing the meat.

Memphis-style barbeques don’t use any glaze or sauce during the cooking process. Instead, it gets its distinct flavor from the unique rub and the hickory wood they cook it on.

Another world-famous feature of Memphis taken from its barbeque is the World Championship Barbeque Cooking Contest held in May. It’s a four-day competition that takes place in Tom Lee Park with a $115,000 prize.

This sauce is arguably the best BBQ sauce in all of America and is from a well known and very popular BBQ restaurant in town. 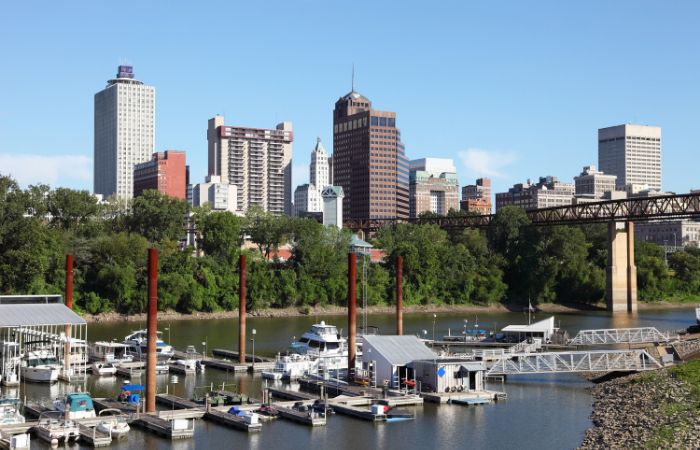 Memphis Has Many Renowned Medical Centers

Memphis is home to many nationally renowned healthcare centers. For example, Delta Medical Center of Memphis is the only medical center owned by employees in North America.

In addition, the Methodist University Hospital is one of the largest hospitals in the US, and the Collins Chapel Connection Hospital was the only unsegregated hospital until the 1960s.

Named after the Egyptian city of Memphis, the American city of Memphis lies on the banks of the Mississippi River. It’s known for its impact on blues, rock-n-roll, and country music, helping many legendary musicians record their first songs.

That’s why many landmarks, including museums, celebrate this legacy. The Sun Studio, the Memphis Blues Hall of Fame, the Seale Street, and the Rock-n-Roll Soul Museum are major examples.

And if you visit Memphis, don’t forget to try their famous barbequed pork ribs in the numerous barbeque joints around the city.