Top 17 Things West Virginia is Known For & Famous For 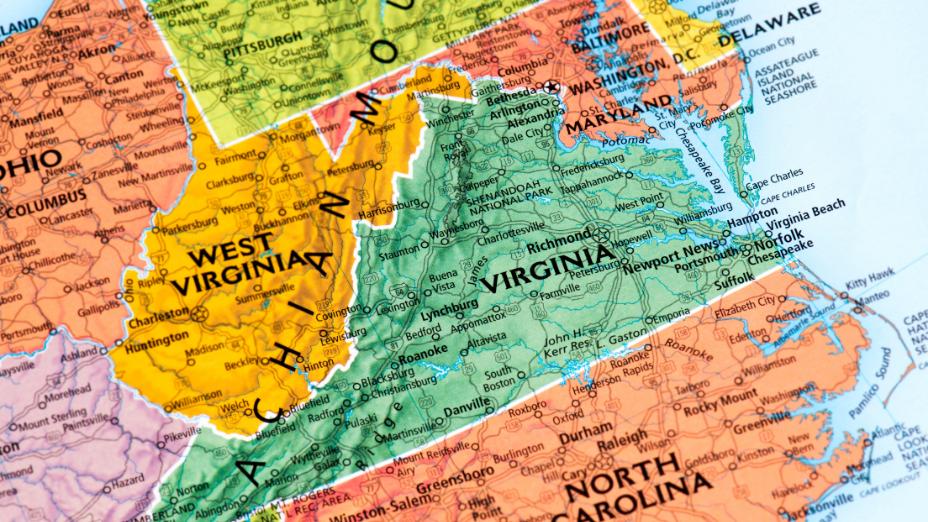 What Is West Virginia Known for & Famous For

Whether a local or a tourist, you’ll likely encounter many hidden gems while exploring West Virginia. It’s one of the most scenic states in the US, with rocky mountains, forests, and rivers. But what is West Virginia most known and famous for?

West Virginia is known and famous for its nickname “The Mountain State,” which it earned thanks to its rugged land. As a result, it’s a perfect destination for various outdoor activities, such as hiking, skiing, and mountain biking.

Are you ready to immerse yourself in West Virginia and its top attractions? Continue reading to learn more about what makes “The Mountain State” so well-known and famous, particularly among outdoor enthusiasts. I’ll also include several outdoor adventure opportunities and historical sites worth visiting.

When you hear “The Mountain State,” only one name comes to your mind: West Virginia. This is the 35th state in the United States, with a population of 1.75 million people according to 2022 population estimates.

Most people, especially visitors, wonder where the state got its nickname. The main reason is that West Virginia is located within the Appalachian Mountains range. As a result, every square inch of the state is surrounded by mountains, hills, and trees. The state is also the topmost forested area in the U.S., with roughly three-quarters covered in forests.

So, if you’re an outdoorsy type, West Virginia is a great place to explore or perhaps relocate with your family to experience an outdoor paradise unlike any other.

The Appalachian Mountains, commonly known as the Appalachians, are a chain of mountains in North America’s northern and eastern regions.

The Mountains cover about 2,400 km (1,491 miles) of terrain in across 13 US states, with West Virginia located entirely within the Appalachian Mountains.

The Appalachian Mountains make West Virginia known since it is home to many famous landmarks, such as the Appalachian National Scenic Trail, which runs across the state and extends to Maine and Georgia.

With a length of 3,531 km (2,194 miles), the Appalachian National Scenic Trail is one of the most well-known hiking trails in the country.

As its nickname suggests,” The Mountain State” encompasses the Appalachian Mountains,  which can treat visitors and residents to some jaw-dropping mountain scenery. The best part of the mountainous beauty of the Appalachians is how diverse they are, as they are further divided into four provinces.

The following are the provinces:

In addition, West Virginia has over 1,000 named mountains. Therefore, the state offers a scenic mountain beauty you may not find anywhere else in the country. In 1863, the state adopted the phrase “Montani Semper Liberi,” meaning “mountains are always free.”

If you happen to be in West Virginia, you’ll notice there are all-year-round outdoor activities because it’s a mountainous state with fast-running rivers and forested wilderness areas.

It’s the ideal setting for the following and many other activities.

West Virginia offers an endless array of outdoor adventure activities, making it one of the country’s most known and famous states.

As a result, travelers from all over the country and globally come to West Virginia to enjoy the scenic landscapes and participate in various outdoor adventure activities as part of their vacation plans.

Let’s have a look at ten famous outdoor adventure opportunities.

Although the park was founded in 1978, it was designated as a national park and reserve in 2021 to protect the New River Gorge in Southern West Virginia.

The New River Gorge National Park covers over 70,000 acres (283 km2) of land in the Appalachian Mountains between the towns of Hinton and Fayetteville. It’s the ideal destination for whitewater rafting and rock climbing.

As a result, it attracts more tourists each year and has become well-known for it.

Canaan Valley is a well-known valley in Tucker County, West Virginia, that was recognized as a National Natural Landmark in 1974. It’s located within the wetlands and near the Blackwater River.

Most tourists are drawn to Canaan Valley because it encompasses Canaan Valley Resort State Park and Blackwater Falls State Park, among other attractions. Additionally, most of the attractions are open year-round, ensuring you can enjoy an exciting adventure when visiting the Canaan Valley at any time.

You can also stay at the Canaan Valley Ski Resort, the perfect place for snow lovers looking to rent skiing and snowboarding gear and enjoy over 47 different slopes and trails within Canaan Valley.

Located in the shadows of Cacapon Mountain, Cacapon State Park offers about 6,000 acres (24 km2) of land to explore by locals and tourists interested in various year-round activities.

The following are some of the activities available in Cacapon State Park:

The hospitality and amenities available at Cacapon State Park make it a popular destination for locals and visitors. They feature a 124-room classic lodge where you can spend the weekend with your family or friends.

Blackwater Falls State Park is the most famous park in Tucker County, West Virginia, which acquired its name from its naturally dark waters. The park has attracted locals and tourists from all over the country who come to see the breathtaking beauty of the Blackwater Falls.

Another highlight of the park is the Blackwater Falls view from Lindy Point, which allows you to see the falls at their deepest point. It’s one of West Virginia’s most photographed scenic sites.

Are you an avid traveler with a photographic eye? You’ll surely enjoy taking photos of the 62-feet (18.9 meters) tall waterfall and also enjoy some outdoor activities like skiing and mountain biking in the winter.

Seneca Rocks stand 900 feet (274 meters) above stream level and are extremely popular with rock climbers who attempt to climb it via 375 different routes.

On reaching the top of the Seneca Rocks, you’ll be treated to a panoramic view of the Monongahela Forest. You can stop by the Discovery Center to learn more about the rocks and tour the historical museum within the Seneca Rocks State Park.

Seneca Rocks is an excellent vacation spot in West Virginia for individuals of all ages.

The 3,030 feet (924 m) long bridge, built-in 1977, connects the hills on either side of the New River Gorge, making it one of the world’s biggest mega bridges. The New River Gorge Bridge is a stunning piece of engineering that has drawn visitors to Fayette County, West Virginia.

While standing on the bridge, you can enjoy a 360-degree view of the green landscape and feel the cool breeze of the New River Gorge. It’s the ideal setting for whitewater rafting or a jet boat ride while photographing the new bridge from below.

You can enjoy a two-to-three-hour bridge walk tour, but you’ll be secured to a safety cable.

Opened in 1966, Summersville Lake boasts around 2,700 acres (11km2) of excellent quality water and 60 miles (96.6 kilometers) of shoreline, making it one of the largest lakes in West Virginia. The lake is famous for its multi-sport adventures, including everything from standup paddleboarding to kayaking.

The stunning lake is also ideal for swimming or simply relaxing while enjoying the beautiful and tranquil West Virginia scenery. There are cozy camps around the lake where you and your family can stay on vacation.

Visiting the Summersville Lake lighthouse for a spectacular lake view is the perfect weekend getaway.

Monongahela National Forest has the highest peak in West Virginia but extends to nine other counties in the United States. The highest peaks include the famous Seneca Rocks and Spruce Knob. The forest covers over 921,000 acres (3,727 km2).

This vast forest provides a wide range of recreational opportunities for its visitors, the common being the following.

If you want to explore the West Virginia countryside, Monongahela National Forest is the best place to start because it allows backpacking, and you can stay overnight at the campgrounds.

Founded in 1778, The Greenbrier Resort is a five-star luxury resort that doubles as a traditional landmark for the West Virginia residents. This is because it served as a hospital for wounded soldiers during World War II and the American Civil War.

However, The Greenbrier Resort is best known for welcoming and accommodating international tourists worldwide, including 26 former US presidents. It spreads across 11,000 acres (45km2) of land and features 700+ rooms, 20 restaurants, and dozens of businesses.

Named after a United States Army soldier Phil G. McDonald, the Glade Creek Bridge, commonly known by residents and tourists, has a total length of 2179 feet (664 meters) and a height of 700 feet (213 meters).

It’s one of the top ten highest bridges in North America and West Virginia’s second-highest bridge after the New River Gorge Bridge.

If you prefer driving as a recreational activity, this bridge may be the ideal place to begin your West Virginia exploration. The Glade Creek Bridge allows you to see the magnificent scenery of West Virginia as you drive through Interstate 64 in Raleigh County.

Although some West Virginia landmarks also serve as historic sites, a few stand out as the greatest in the state for anyone interested in learning about the state’s history.

You can take your family on an educational tour or vacation to several historic sites. Everyone will learn about West Virginia’s rich history and what makes it famous among travelers and locals.

If you want to get a taste of West Virginia’s rich past, the first location you should visit is Harpers Ferry town, which is home to the famed Harpers Ferry National Historical Park.

You’ll explore fascinating museums and exhibitions and participate in various outdoor activities, such as hiking, bicycling, and climbing. This explains why the town attracts over half a million visitors annually, making it one of West Virginia’s most famous destinations.

You can hike the famous Appalachian Trail or visit the Civil War battle site in Harpers Ferry to witness it and capture memorable photos. The town provides an abundance of recreational and natural activities.

The USS West Virginia (BB-48) was the last Colorado-class battleship sunk by Japan’s torpedoes and bombs, killing over 106 crew members. The U.S. entered World War II as a result of this.

The ship was later refloated and rebuilt by Newport News Shipbuilding between 1943 and 1944 and sent back into the battle before being decommissioned in 1947. However, the ship’s remains can be found in most of West Virginia’s historical sites, including the West Virginia State Museum in Charleston and Harrison County Courthouse in Clarksburg.

Located in Weston, West Virginia, Trans-Allegheny Lunatic Asylum is a historical site where strange paranormal activity such as ghost sightings and strange noises have been reported. As a result, it provides the most thrilling experience for daring tourists.

You’ll see multiple hospital rooms and other artwork done by patients during art therapy because the Trans-Allegheny Lunatic Asylum was previously a psychiatric facility from 1864 to 1994. It’s one of West Virginia’s creepiest attractions.

West Virginia is mostly known and famous as the “The Mountain State” and many other top attractions. However, you can’t exhaust the list of outdoor adventure opportunities and historical sites in West Virginia, but they are worth exploring.