10+ Things Austin, TX is Known For and Famous For 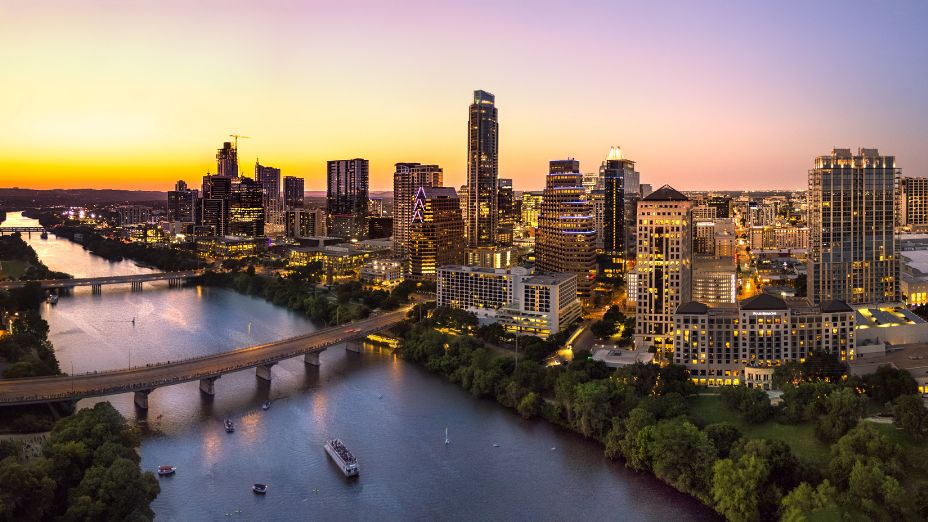 What Is Austin, Texas Known For?

Austin is the state of Texas’s capital and also the fastest growing city in the state. But why are so many people moving here? It might be because Austin, Texas is known for just about everything from food trucks to museums to music.

Austin is known for its music, honored with monthly music festivals and Rodeo Austin, which highlights Texas’s cowboy roots, among other festivals. This Texan city has an art following, home to art museums like Mexic-Arte Museum and the Museum of the Weird. Austin also has a reputation for food trucks, biscuits, deep-fried chicken, BBQ, and brews.

Austin is also one of the top 7 cities the state of Texas is known for.

Austin has a long summer, sunny days, and little precipitation, making it the perfect place to explore all of the events and activities that the city’s known for. Whether you want to hike, enjoy live music, learn about history and art, or have a nice meal, Austin, Texas, is the place to be.

Austin is a cool city! Don’t believe me? Check out this book on Amazon as proof! 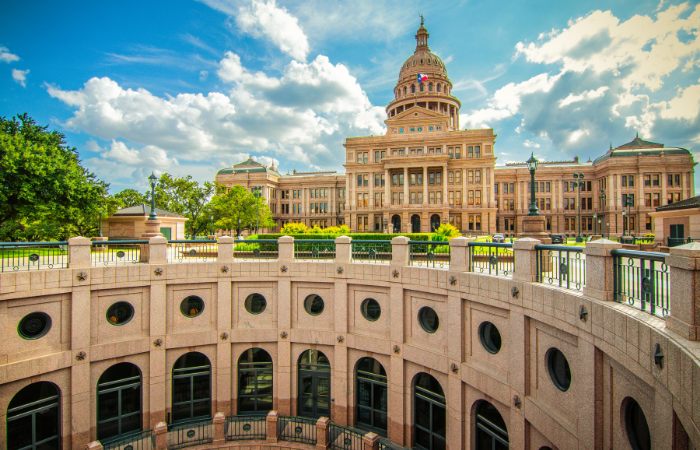 Austin is most well-known for its music scene, but other art types also make themselves at home in the city. Concert venues and small bars host musical performances alike, and the city’s art museums boast nearly every style and genre. Art lovers can find events year round at all of Austin’s fine art institutions, local restaurants, and more.

Austin hosts several music festivals each year, with at least one festival every month. The types of events hosted range between different genres and local, national, and international talent levels. In January, Austin’s Free Week hosts hundreds of bands at venues all across the city.

One of the most popular festivals is Austin City Limits, held in October each year, taking place over two weekends and attracting musical performers worldwide.

Outside of the large music festivals in Austin, there are also musical performances 365 days a year at more than 250 music venues and bars throughout Austin. This city has more musical venues than any other American city, making it the place to be for aspiring musicians.

The biggest concert venues in Austin have national and international headlining musical acts. The Nutty Brown Amphitheater has music every week along with a cafe that serves classic Southern food. ACL Live at the Moody Theater is another popular venue for big concerts spanning all musical genres.

If you like the bar-music vibe, multiple bars in the city host performances for nearly every music genre imaginable. For country music lovers, Broken Spoke and The Little Longhorn Saloon host concerts by the most well-known and up-and-coming country artists in the city. For a fun DJ every single night, adjacent Hotel Vegas and Volstead Lounge are the spots to be. 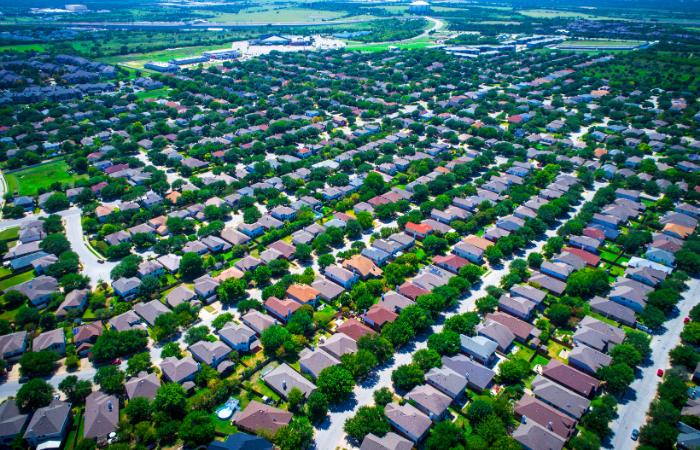 In addition to the music scene, Austin is also known for its art museums and exhibits. Some art events highlight famous, classic pieces of art, whereas others showcase the local art culture.

Austin’s largest art museum is the Blanton Museum of Art, located at the University of Texas at Austin. The museum has an extensive permanent collection of art, with nearly 18,000 pieces. There are also rotating temporary exhibits covering all art genres, including pieces from University of Texas students.

There are also other famed art museums in Austin. The Mexic-Arte Museum showcases Mexican and Latina art since Austin is so close to the Mexican border. This museum has a few permanent exhibits as well as some seasonal ones. Contemporary Austin is all about contemporary art and has both indoor and outdoor displays. There’s a classic museum and a fourteen-acre natural area that includes a picturesque sculpture garden.

Another art program in the city is the Big Medium, a nonprofit organization that highlights local Texas artists. The most popular event that Big Medium produces is two Austin Studio Tours. These are annual events that display local artists’ work and provide artists with a social space to share ideas and artwork.

Food and drinks are a huge part of what Austin is known for. The food trucks in Austin are increasing exponentially, and restaurants and bars are constantly coming up with new items to bring in customers.

For all the best spots to check out around the city, take a look at this book on Amazon.

The increasingly popular food trucks are a huge part of Austin’s food scene. Since the weather is pleasant year-round, food trucks aren’t strictly a spring or summer thing. It’s so popular that there are over 1,000 food trucks serving Austin.

The food trucks tend to park in certain Austin neighborhoods, and you can find various cuisines all in one spot. Locals know to go to the South Austin Trailer Park and the South First Food Court for food truck delicacies. Even further south is the Thicket Food Truck Park, which offers live entertainment and family-friendly activities.

Most notably, the food trucks offer diverse and delicious foods. For example, Veracruz All Natural is a nationally rated taco truck. Tommy Want Wingy sells unique wing lollipops, and Bananarchy lets you make your own dipped frozen bananas covered with toppings of your choice. Yummy! 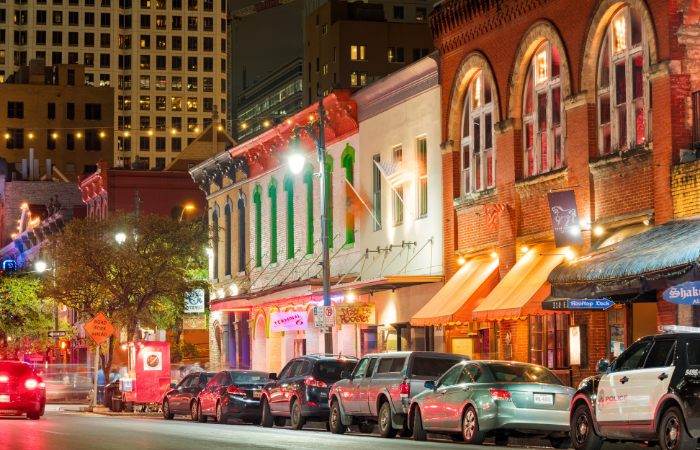 Austin has hundreds of restaurants that are just as popular as the city’s food trucks. The ones drawing the biggest crowds offer Austin’s specialty foods, such as southern comfort food, Mexican food, and barbecue.

You’ll find deep-fried chicken and biscuits at Olamaie, a restaurant with wildly popular classic southern food. Since Austin is close to the border, Mexican food is also a huge delicacy in the city. Tacos are easy to find, and people flock to places like Nixta Taqueria for corn tostadas and Vaquero Taquero for gigantic quesadillas.

Austin is also home to some of the best barbecues in the country, scattered about the city. Terry Black’s BBQ has the perfect brisket and a staff full of barbecue experts. BBQ and Brew is a small, local favorite that combines barbecue with simple beer.

Additionally, there’s Tears of Joy, a hot sauce shop that has hundreds of flavors and consistencies of hot sauces and even sauce tastings for people with a brave tongue.

Austin isn’t only known for its unique and delicious food and restaurants. Bars are just as much of a staple in the city. Although many bars have live music, they also specialize in and highlight their specialty cocktails and beers.

The Easy Tiger Linc brings Germany to Austin with its outdoor beer garden and German pretzels. Want to feel like you’re in a 1920s lounge? The Roosevelt Room is one of Austin’s most popular bars, where the drinks can transport you to a different decade. Another bar with a unique feel is Frazier’s Long and Low, a small dive bar that resembles an old diner bar with pool tables and even a jukebox.

If you crave a specialty drink, try Kinda Tropical, with cocktails that’ll make you feel like you’re on a beach inside of Austin. Haymaker also has 40 draft beers, perfect for beer tastings, so there’s always something new to sample.

Breweries are also common in Austin, with each brewing its own carefully made beer. Some breweries like Oasis offer a beautiful overlook of the city. Whip In Beer and Wine has, as the name suggests, beer and wine. They sell homemade beers as well as beers and wine from other breweries in their convenience store. 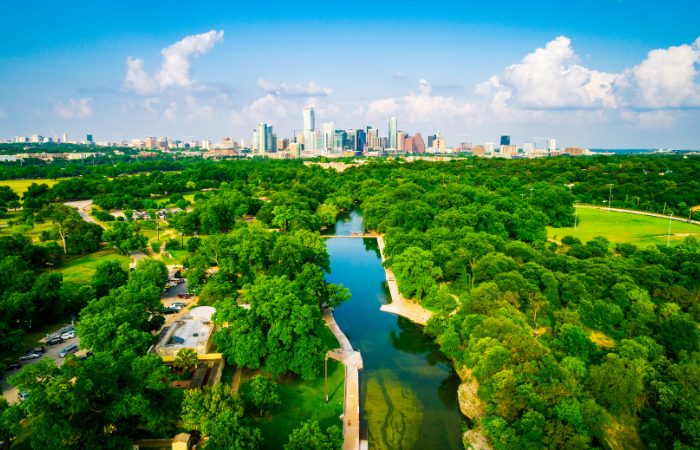 Even though it is a large city, Austin has plenty of greenspace including lakes, pools, trails, parks, and even a mountain. There are activities like kayaking, hiking, swimming, and disc golf for every outdoor enthusiast.

Austin has many hiking trails, nature preserves, and other wilderness areas for a more rigorous outdoor experience. Mayfield Nature Preserve has an easy terrain to hike, where you can explore 24 acres of gardens, trees, and even peacocks.

You can also visit River Place Nature Trail for a more intense hike, a 5.5-mile-long (8.85-km) trail with stairs and steep uphill sections. The trail offers unforgettable views, along with a waterfall and a cave.

A third popular hike, and one of the most popular places to visit in Austin, is up Mount Bonnell, the city’s highest point. To reach the peak, you’ll have to climb up 100 rugged stairs. The views at the top are of Lake Austin and are some of the best in the city, making the effort worth it!

Here are some of the parks that Austin has to offer. 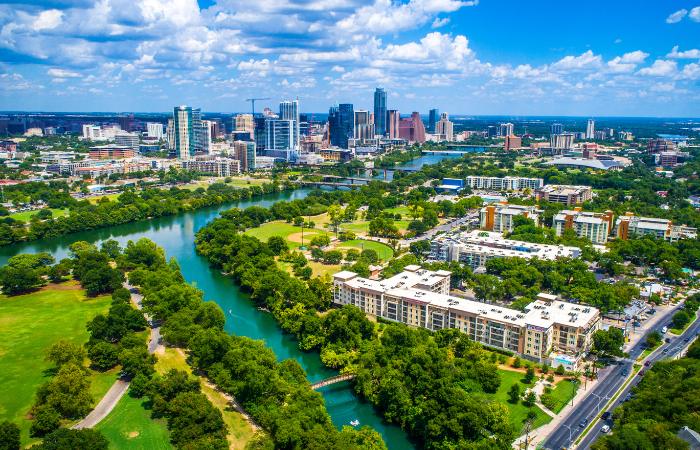 Educational institutions and museums are also quite popular in Austin, Texas. The second-largest higher education institution is in the city, and some government buildings offer tours and events for the public.

The University of Texas in Austin is the second-largest public university in the state. The school has more than fifty thousand students on a campus covering over 400 acres just north of downtown Austin. Additionally, the city also houses 19 other colleges, universities, and technical institutions.

For a brief, unique museum in Austin, visit the Museum of the Weird. The museum is a dime museum, with the whole purpose being to have fun and enjoy the exhibits without thinking too much. The museum’s artifacts are some of the strangest and most interesting things that exist, and you have to see them with your own eyes to believe them.

Austin is the capital of Texas, so the Capitol Building is also in the city. The building’s architecture is similar to a castle, and it stands three stories high. You can visit the building, take a guided tour, and visit the gift shop or cafe. There are educational exhibits inside the building that include the Capitol building’s construction, Texas’s history, and Texas’s diverse culture.

Lyndon B. Johnson’s Presidential Library is in Austin, Texas, at the University of Texas in Austin campus. The library stores historical document pages, photographs of the president and his family, and recordings of speeches and meetings held during Johnson’s time in office. 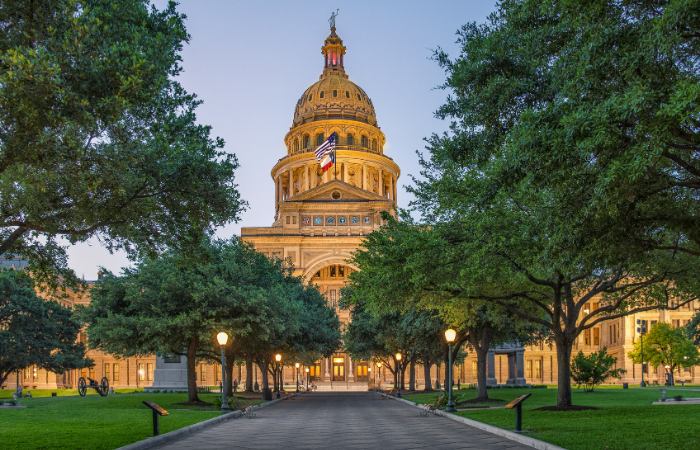 For more information on Austin, Texas, and what to do in the city, the Lonely Planet Pocket Austin guidebook from Amazon has the latest information on everything Austin is known for.

Everyone will find something to enjoy in this growing city, and the activities and events happen year-round thanks to the city’s mild weather. Outdoor activities like hiking and swimming take place year-round, and many musical events take place outside in the warm weather. You can not find the unique food and drinks anywhere else, and the museums and government buildings add a touch of history to the vibrant city.