Top 21 Things Hamburg is Known For & Famous For

What is Hamburg, Germany Known For

Hamburg Germany is the second most populated city in Germany. Hamburg is a major industrial city in Germany’s north and is Europe’s third busiest port city. Hamburg is still little known to the outside world, overshadowed by some of the country’s more well-known cities of Berlin, Munich.

Hamburg, Germany is known for it’s 2,500+ bridge and it’s delicious sea food and weekly fish market. The city is famous for it’s beer and it’s party and nightlife scene. Hamburg is also recognized for it’s Red Light District, the second biggest in Europe.

Let’s look at what Hamburg is known for and makes it stand out from other cities worldwide. 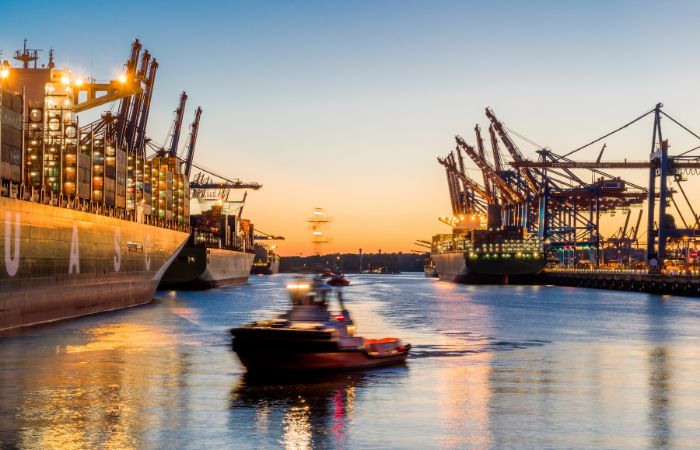 Hamburg is the largest port city in Germany and the third busiest port in all of Europe. Even though it is more than 100 km or 62 miles from the ocean.

The city is able to be a port city because of the Elbe River, which the city sits upon and is its direct line to the North Sea, leading to the Atlantic Ocean.

Hamburg’s shipping industry has long been an important industry for the city and Germany.

Interesting fact: Container ships can only dock at the harbor if they are half full because they need to travel upriver, which is too shallow for full container ships to pass through without touching the bottom of the Elbe River. 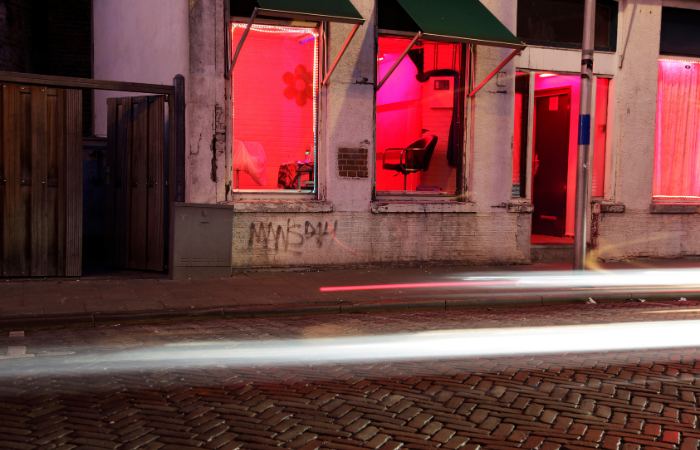 Hamburg has the second-largest red-light district in Europe after Amsterdam.

The area is around the famous street of Reeperbahn and is known as a lively entertainment district with bars, restaurants, nightclubs, strip clubs, and of course, all things sexy times.

Hamburg’s red-light district is different from that of Amsterdam’s and isn’t a touristy as Amsterdam. The area is also full of other entertainment than just prostitutes, whereas in Amsterdam you kind of know why the people are there.

A comment was that Amsterdam’s red-light district is more a beginner-level introduction into that world, and Hamburg is a seasoned pro. Hamburg is famous for introducing the world to S&M. 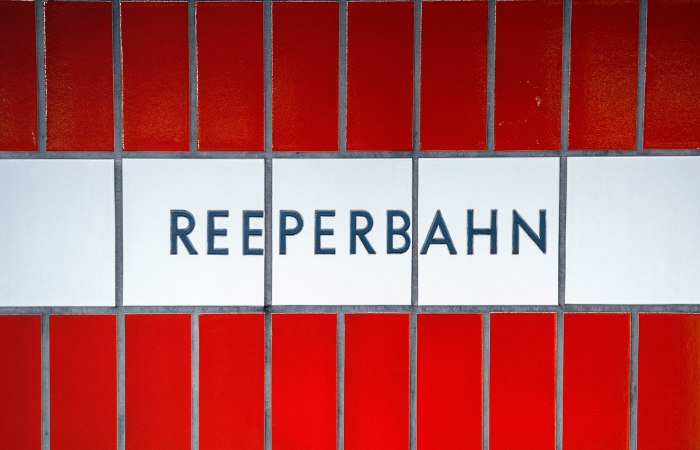 The Reeperbahn is a street in Hamburg. The street is in the St. Pauli district.

The Street also gets its own music festival in September. 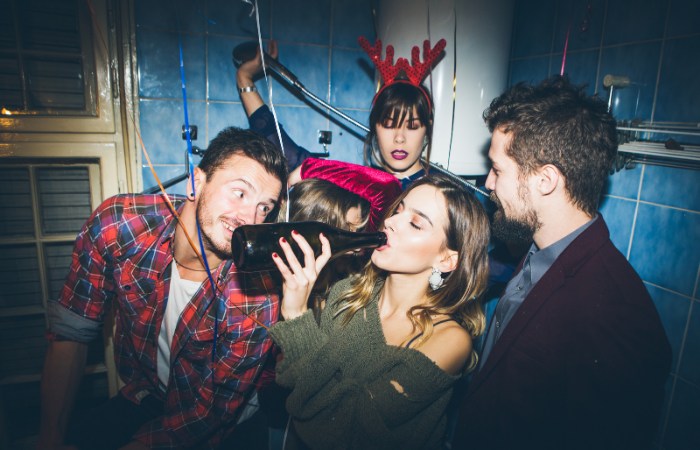 For many, Germany is considered one of the world’s best countries for partying, with clubs staying open until the wee hours of the morning.

Hamburg is no exception to this rule and has embraced it. The city’s most famous area is the Reeperbahn, a street with bars, nightclubs, strip clubs, sex shops, and everything adult-themed.

The area comes to life after midnight and is the main center of the party scene in Hamburg. 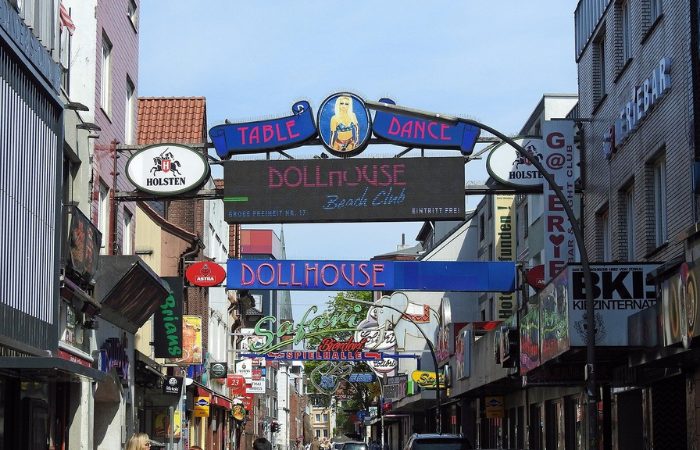 The city has two main nightlife areas, which are St. Pauli and the Reeperbahn and Sternschanze.

Hamburg’s nightlife is arguably one of the best in Germany and all of Europe. With locals feeling that they have one of the best party cities in Europe and a survey saying they might be right.

The city is known for having one of Germany’s most lively nightlife centers and is an adult wonderland with a seedier side once nightfalls.

Check out the Guardian article! 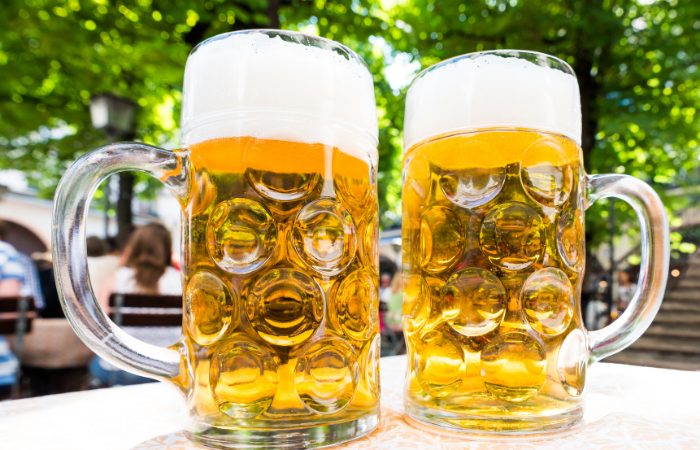 No article about Germany and Hamburg could be mentioned without naming the beer.

The beer that comes from northern Germany is the most consumed beer in the entire country. Becks, which isn’t in Hamburg, hasn’t stopped the Hamburgers (the name of people who are from Hamburg) from coming out to support this local brewery in force.

Hamburg again is overshadowed by its other more well-known drinking buddies of Munich, Berlin, and Cologne. 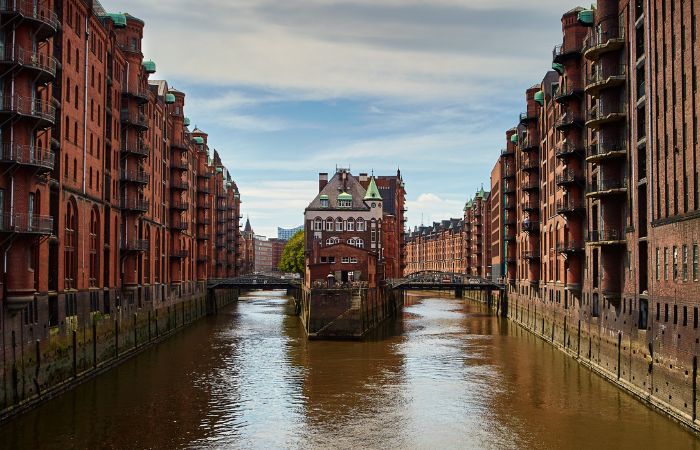 Speicherstadt is the largest warehousing district in the world. The area has become a popular tourist spot with its old timber and brick buildings seemingly built into the canals below.

The area is home to some of the city’s most well-known Instagramable spots.

Speicherstadt has become so popular that the district has been made into a board game, in which you buy goods from ships and collect victory points.

Speicherstadt is also listed as a UNESCO World Heritage Site. 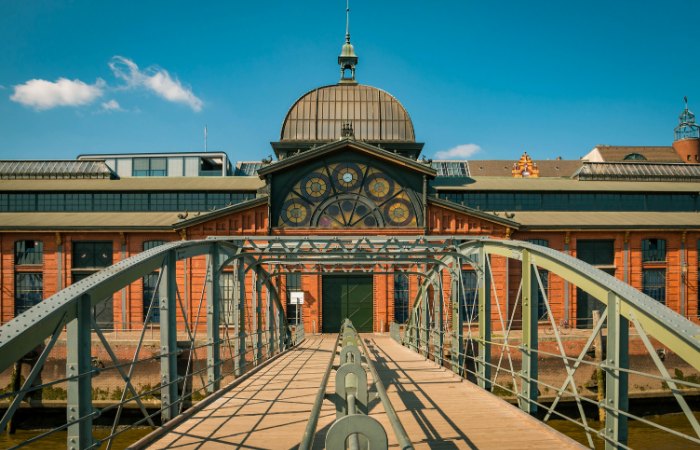 The Fischmarkt is one of the cities best-known features.

Every Sunday starting at 5 am and ending around 9:30. The market attracts on average 70,000 people every Sunday.

The Fischmarkt has been going strong for over 300 years and is one thing the city is known for doing.

This is also where many locals will end their Saturday night / Sunday morning of partying with some local fish sandwiches or, fischbrötchen in german, after a long night out in the city’s Reeperbahn district. 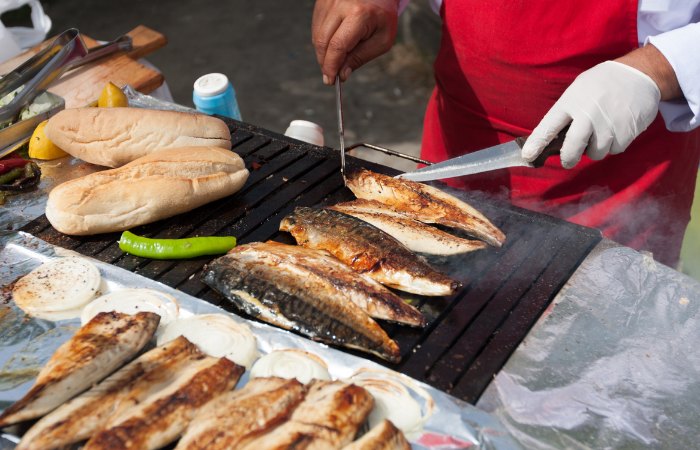 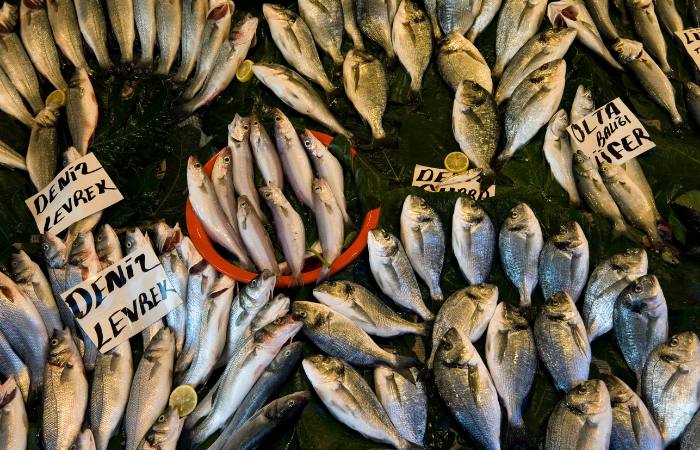 Hamburg is one of the largest port cities in Europe. It is also quite a bonus for travelers who love seafood with freshly caught fish daily.

The fish market every Sunday in Hamburg has become known for its amazing seafood and has some of Germany’s top restaurants.

While the seafood is great, one of the city’s most well-known and loved dishes is a fish sandwich called fischbrötchen. These are a must-have for anyone visiting the city, even if you don’t love fish that much. When in Rome! (or Hamburg.)

Side note for those wondering; Hamburg is NOT where the Hamburger was created even tho the people of Hamburg call themselves Hamburgers. 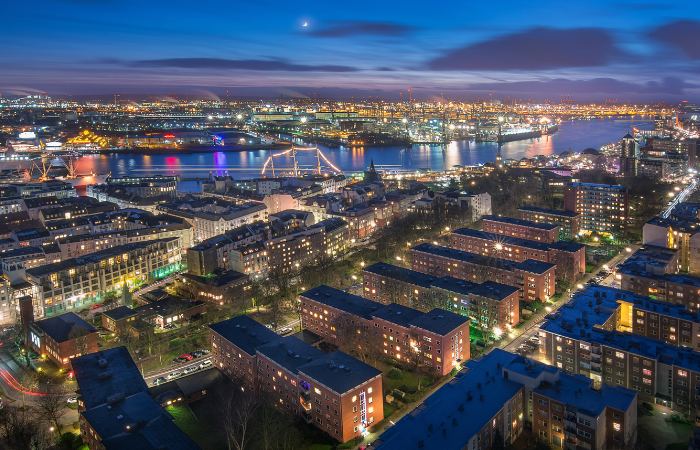 Hamburg is a city that has been built on Water. Water surrounds the city, and its main center hugs the River Eble, which is connected to the North Sea.

Originally founded as a fishing village, the city has grown into a major maritime hub for Europe and the world. 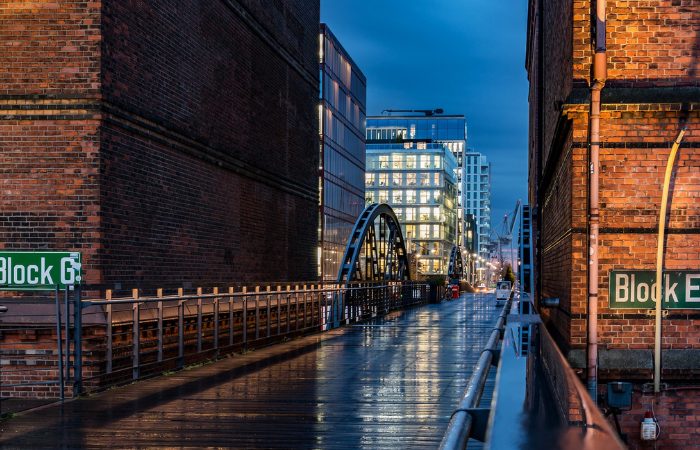 This one may seem crazy but Hamburg has more bridges than people, just kidding! But the city does have a lot.

Hamburg has more bridges than Venice and London combined, for a whopping grand total of more than 2,500 bridges which really goes to show you how much of the city is surrounded by water. 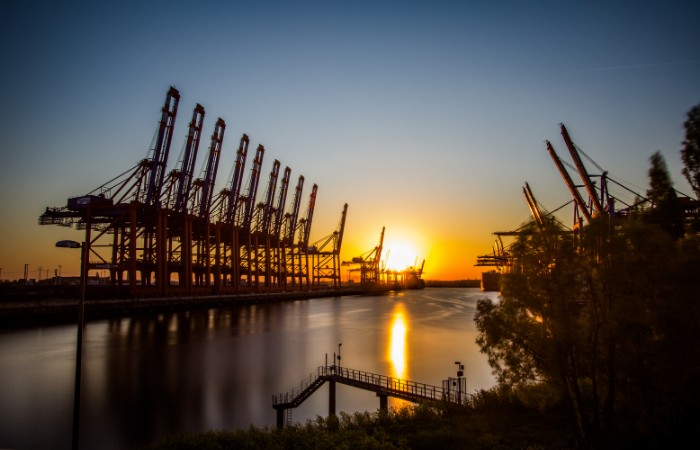 One of Hamburg’s most well-known facts is that it is a port city, and the harbor is home to boats of all kinds from yachts, commercial container ships, and even some boats that are more than.

The Harbor is becoming a home for some of the world’s largest boats. Hamburg has transitioned from a small fishing village to a major economic hub for Germany and the region. 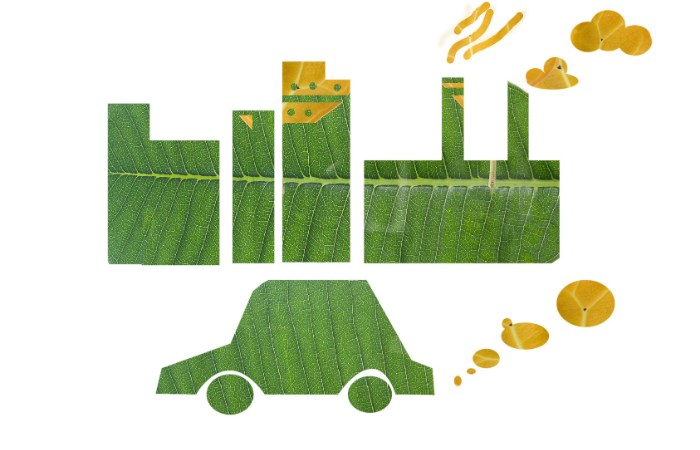 Hamburg is the second greenest city in Germany and has some big plans to become even greener. The city plans include expanding green spaces, improving city works, and removing all cars from its roads.

The city has big plans ahead. 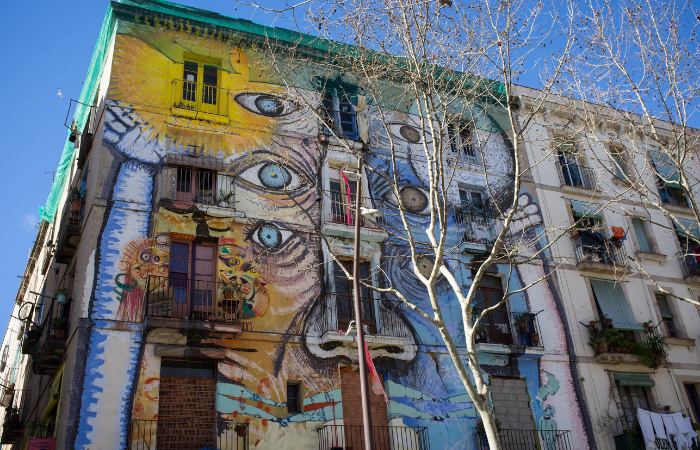 Hamburg is covered in graffiti throughout the city, with some areas hit especially hard.

The city wears these markings with a sense of pride. The city feels alive with the ever-changing art pieces on the walls.

Some popular areas for street art to check out: 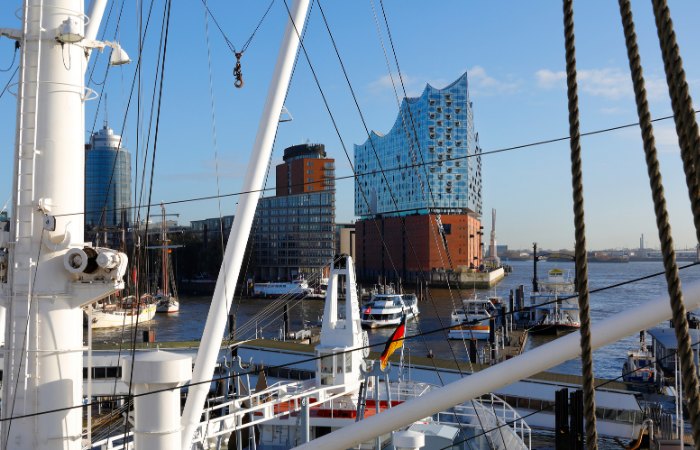 Elbphilharmonie is considered to be one of the nicest concert halls in the entire world.

Elbphilharmonie is so much more than a concert hall. It has amazing views of the river Elbe from the observation deck, an arched escalator (the first of its kind), spectacular seating for shows, and overall a great experience.

The Elbphilharmonie, or its nickname of Elphi, was massively over budget but has become one of the world’s favorite places to catch a show if you are lucky enough. 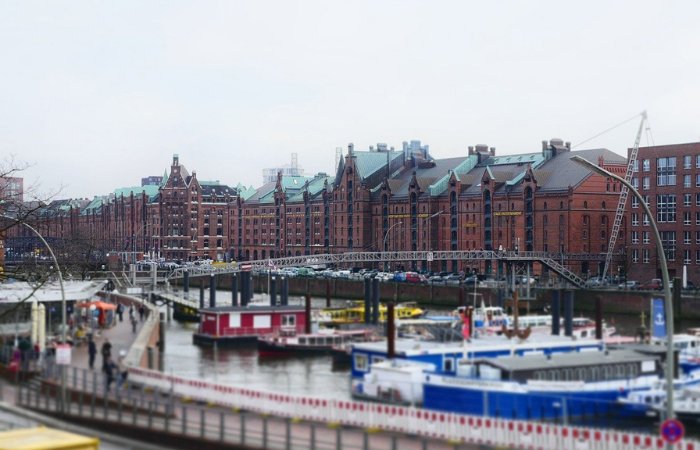 Hamburg has the world’s largest miniature train railroad system in the world.

Set in the heart of the city, in the well-known Speicherstadt neighborhood, this miniature train set up has more than just trains, with an airport and has recreated other cities worldwide in miniature form.

Miniatur Wonderland workers have spent more than 800,000 working hours on it at the cost of 21 million euros. 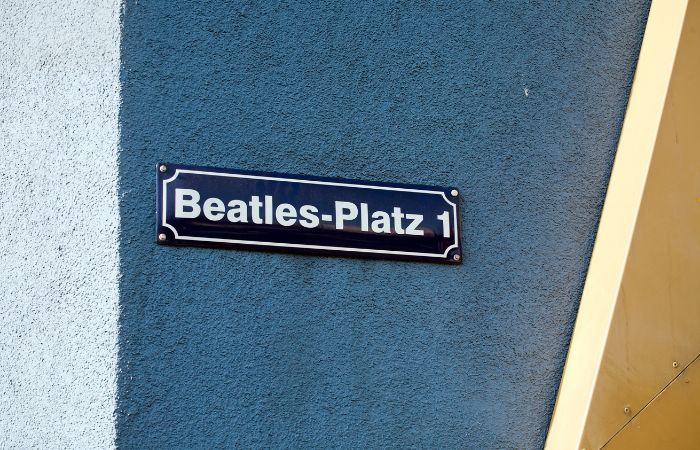 The Beatles have received much love from Hamburg and started by playing in clubs and bars along the citys’ well-known Reeperbahn street in the neighborhood of St. Pauli. 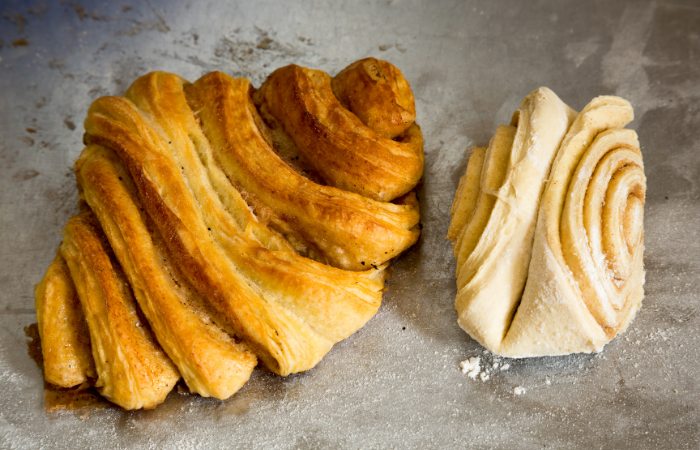 The Franzbrötchen is typically eaten at breakfast, making it a sweet part of your morning breakfast routine while in Hamburg.

Franzbrötchen is hard to find outside of Hamburg so when visiting, make sure that you treat yourself to this delicious morning breakfast pastry.

Old Elbe Tunnel is a famous landmark of Hamburg and is an underground pedestrian and vehicle tunnel that is 426 meters long and 24 meters below the ground. Built-in 1911, the tunnel connects the main city center to the docks on the River Eble’s other side. 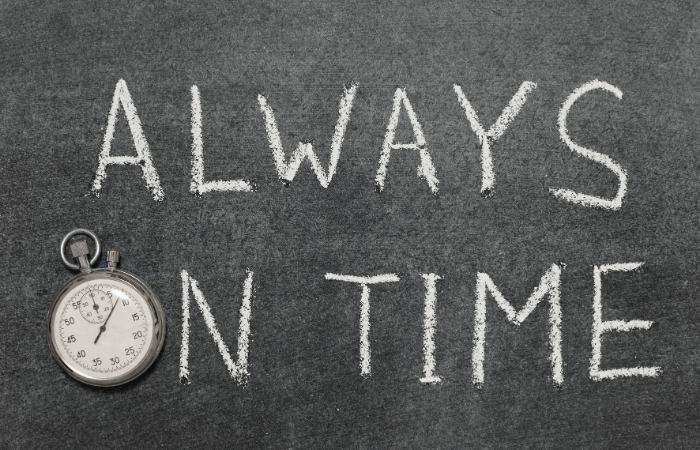 The German people’s efficiency at infrastructure has created a running joke that they are always on time. Everything in Germany prides itself on being on time.

They have gotten so good at being on time for almost everything that has become an international joke. Hamburg is no different.

Some leading factors to why they are always on time. 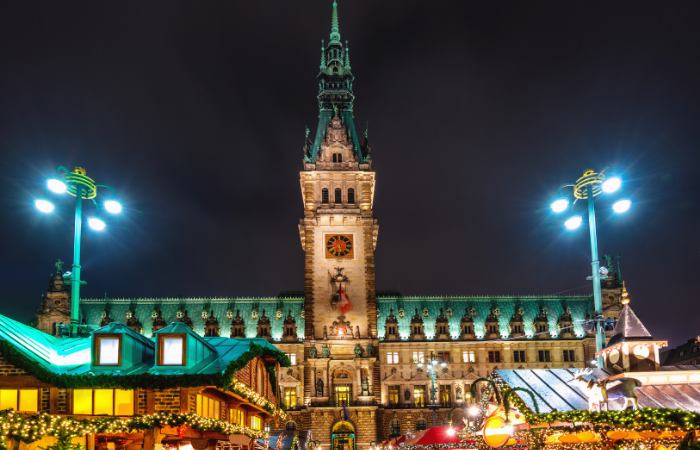 Europe is known for its Christmas markets, and Hamburg shares in all of that splendor.

The Christmas markets begin at the end of November and continue until a day or two before Christmas.

It creates a warm and magical feeling with the Christmas lights reflexing off the water makes for an incredible sight.

Hamburg is especially known for it’s party and entertainment district and the fact that it is a port city. It’s a major economic hub of German and has helped ship many of Garmany’s industrial goods to the world.