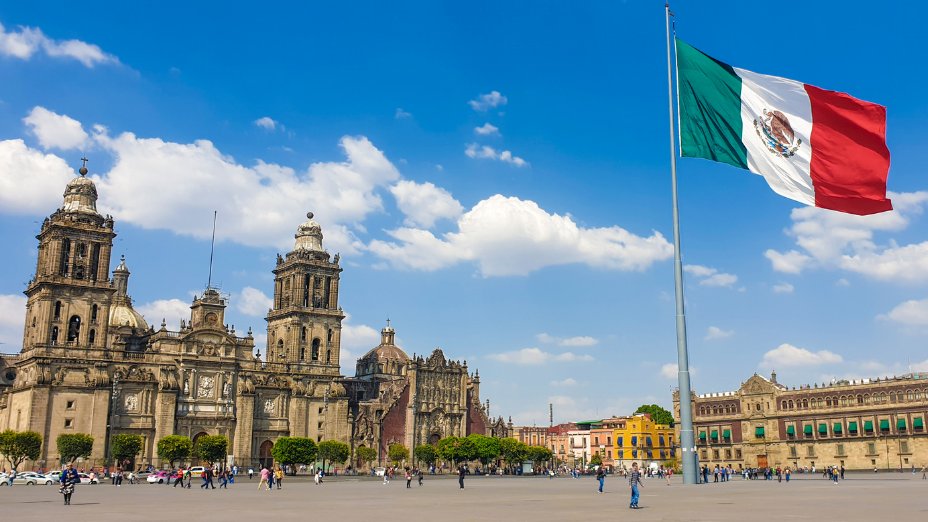 What Is Mexico City Known For?

Mexico City is known for its important Aztec history, the floating gardens of the Xochimilco area, and well over 100 museums, including the Anthropology Museum and the Frida Kahlo house. As one of the oldest cities in North America, it’s also home to traditional Mexican culture and spicy food.

All visitors can find something exciting to do in Mexico City, whether you prefer the high energy of a Mexican wrestling match or a quiet walk through an art museum or a large city park. With such a long history, Mexico City has plenty to boast about. Read on to learn about the most exciting parts of the city. 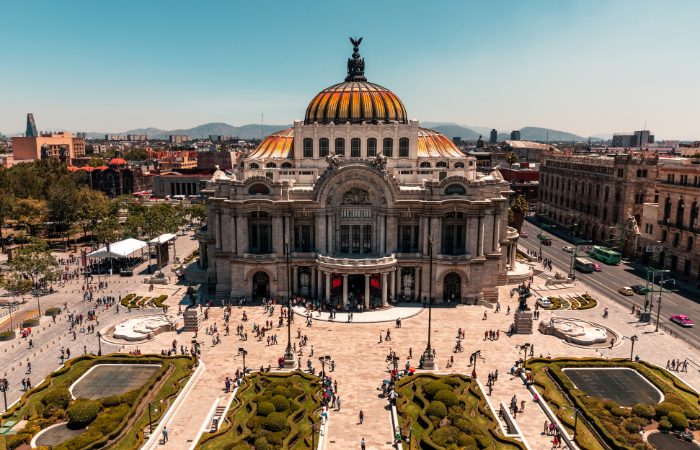 The Mexican people of the Aztec Empire founded the original Mexico City, Mexico-Tenochtitlan, in 1325. They built it on an island in the middle of Lake Texcoco in the Valley of Mexico. In the 1520s, the Spanish conquistador Hernán Cortés took over the area. He razed the city and rebuilt it in a grid system according to Spanish style.

Cortés was the first of many to start draining the lake. Today, the city sits in the lake bed, which is almost entirely dry. In the 1500s, the system of canals between various lakes and islands in the area still existed in several forms. The gradual draining has slowly reshaped the ecosystem around the city, and modern-day Mexico City is facing sinking problems because the lake bed is so soft.

Despite the difficulties of the lake system and canals, Mexico City was the capital of New Spain, the Spanish colonial empire in the New World, for three hundred years. In 1821, Mexico officially gained independence from Spain, and Mexico City has served as the seat of government in one capacity or another for the majority of the time since then.

The 19th century was tumultuous for Mexico City, with a string of wars and occupations and rebellions. Regardless of who was in power, Mexico City has always been the heart of power and economic control in Mexico since Cortés arrived. Vestiges of each political era still exist around the city’s sixteen boroughs. 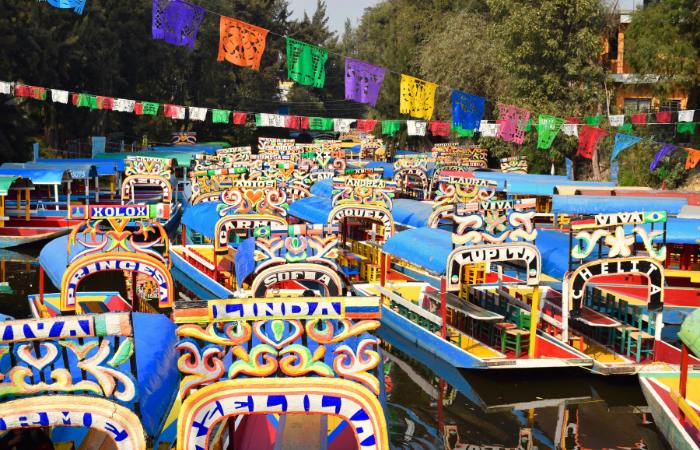 In the Southeastern part of the city, a single borough called Xochimilco holds what’s left of the once-extensive canal and island system that covered the Valley of Mexico in Aztec and pre-colonial times. The borough is a World Heritage Site, which protects this area from further destruction.

Historically, Xochimilco was a separate city from Mexico City, which is one of the reasons the canal system persisted here. Now, it’s a popular area for tourists and locals alike. The canals are dotted with human-made islands called chinampas. Indigenous people first created chinampas to create new farm spaces in the city, a practice that still exists today.

The most famous chinampa is the Island of the Dolls. This particular chimpana has been featured on a number of television programs, which increased its popularity. The legend of its origin is that a local man found the body of a drowned girl and her doll near his chimpana. He hung the doll from a tree to honor the dead girl.

However, he began hearing whispers, so he collected more dolls. The island is now covered in hundreds of dolls. Tourists sometimes bring dolls to the island to leave them there. Many people claim it’s haunted and that you can hear whispers from the dolls. 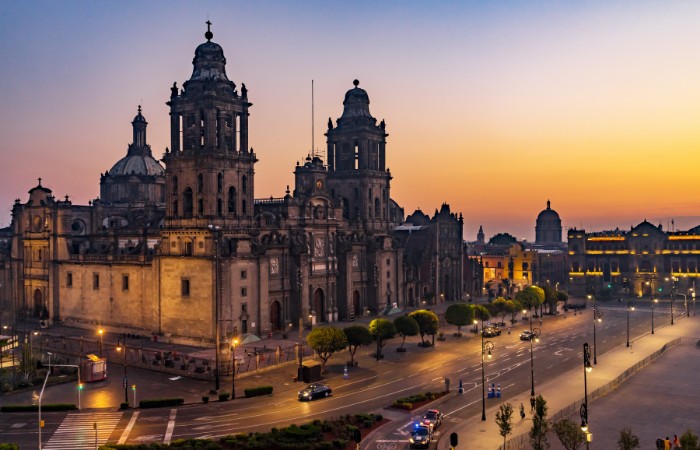 Throughout Mexico City, there are 170 museums as well as numerous monuments and architectural marvels. The museums cover art, culture, and history, giving visitors plenty to see and learn from every period in the city’s long history.

The Angel of Independence

One of Mexico City’s most recognizable landmarks is the 22 foot (6.7 meters) tall golden angel statue, the Angel of Independence. It stands in the middle of a traffic circle in downtown Mexico City near many of the city’s important buildings. The base of the statue towers over the road at 118 feet (36 meters) tall, and it’s covered in carvings, all depicting people and scenes important to Mexican Independence.

The statue was completed in 1910. However, in 1925 a number of heroes in the fight for Mexican independence were interred under the statue in a mausoleum. There have been a few instances of damage from earthquakes and protests, but the statue still stands tall above the city today.

Another exciting way to learn about the history of Mexico city is with a visit to the National Palace. Today, it’s the residence for the president, but the building was once the residence for Spanish rulers during the colonial era. Before that, an Aztec palace stood on the site, and the current palace is built on top of it.

Some of the galleries and courtyards are open to the public, including a large mural by Diego Rivera, one of the city’s most famous artists, depicting Mexican history. There’s also a museum, archive, and library dedicated to the country’s and city’s histories.

The National Museum of Anthropology

History takes the front seat again in one of Mexico City’s most famous and influential museums, the National Museum of Anthropology. The museum houses collections related to archaeology, ethnography, and history in the region.

The focus of the museum is on the indigenous cultures and people who founded the city. As a result, there are some important pre-Colombian artifacts there, including the Aztec calendar stone (also known as the Sun Stone).

Near the National Museum of Anthropology is the site of one of the Aztec’s Great Temples. Today, a museum housing artifacts excavated from the temple, known as Templo Mayor, sits on the land. However, archeologists have determined that the Aztecs weren’t the first group to build there.

The Spanish conquistadors destroyed most of the structures of Mexico-Tenochtitlan. Not much is left, but the Templo Mayor museum holds most of the items that archeologists have been able to unearth.

For visitors interested in fine art more than history, the Frida Kahlo Museum in Coyoacán is a memorable destination. La Casa Azul is home to some of Kahlo’s most important works of art, as well as works by Diego Rivera, Kahlo’s husband.

Khalo grew up in this house and returned to it later with Rivera. Rivera set it up as a museum after Kahlo’s death at her request. Rivera and Kahlo are two of the most well-known figures in art history, and Mexico City features prominently in their lives and work. 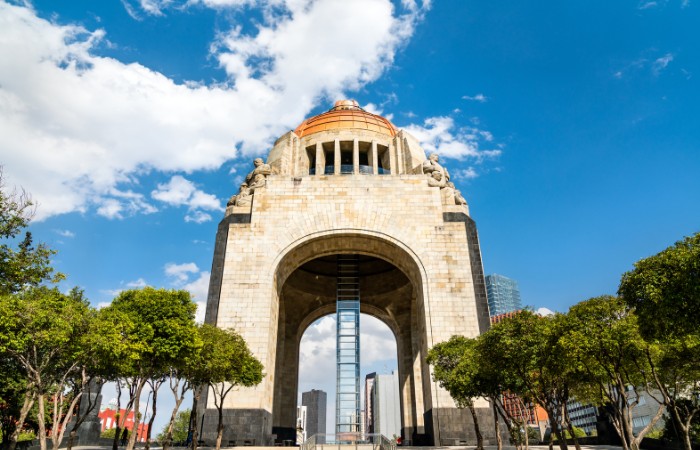 Mexico City is home to abundant art and culture, but it also has abundant parkland. The Bosque de Chapultepec is the largest park in the city at over 1,000 acres. A few of the city’s museums are in the park grounds, including the National Museum of Anthropology and the Modern Art Museum. There are also performance spaces, a zoo, an amusement park, and a lake.

The park is divided into three main sections based on when they were established.

On the eastern edge of the historic city center is a large public market, the Mercado de la Merced. This area has been a marketplace for centuries since the arrival of the Spanish colonizers. It was once an open-air market, but in the 1860s, a few permanent buildings went up.

Many of the stalls are dedicated to food (both foodstuffs and prepared dishes), but there are also stalls for household items, flowers, candy, and clothing. Over the years, the market has experienced a number of fires and explosions, but sellers always return. The most recent fire was in December of 2019, and the damage is still present, but many of the sellers have already come back.

Day of the Dead celebrations are an integral part of Mexican culture throughout the entire country. While Mexico City’s large public parade to mark the occasion is relatively new (launched in 2016 following inspiration from a James Bond film), it’s one of Mexico’s most extravagant public events.

The festivities last from October 31st to November 2nd every year, with the parade taking place on November 2nd. Xochimilco is particularly festive, with the chinampas and canals decorated for the occasion. The event is a remembrance for and celebration of people who have passed.

Mexico City is also the site of one of the most well-known Marian visions in Catholicism. A Marian vision refers to any supernatural appearances of the Virgin Mary, usually associated with miracles. In this case, an indigenous man named Juan Diego had a series of visions of Mary in December of 1531, including her image appearing on his cloak.

There is now a basilica, the Basilica of Our Lady of Guadalupe, built on the hill where Juan Diego had his Marian visions. His cloak is preserved inside, and the basilica is the site of many Catholic pilgrimages. Every year, on December 12th, many Catholics celebrate Día de Nuestra Señora de Guadalupe to commemorate this event.

The basilica is still a major cultural site other times of the year. It’s also an example of one of the many Catholic churches built in Mexico City following Spanish colonization.

Wrestling has just as much of a place in the city as the churches. Mexican wrestlers, or luchadores, compete in two arenas in Mexico City: the smaller Arena Coliseo and the imposing Arena Mexico. Lucha libre, or free wrestling, is the traditional style.

Luchadores often wear colorful masks that are an essential part of their wrestling character. Sometimes, rivals will participate in betting matches called Lucha de Apuestas where they’ll publicly bet their masks or hair on the outcome of the match. If a luchador loses their mask, they aren’t allowed to use that mask anymore.

Lucha libre is part of the intangible cultural heritage of Mexico City, like the Day of the Dead. This is a designation that includes culturally important rituals, festivals, or other parts of a city that aren’t tied to physical locations. 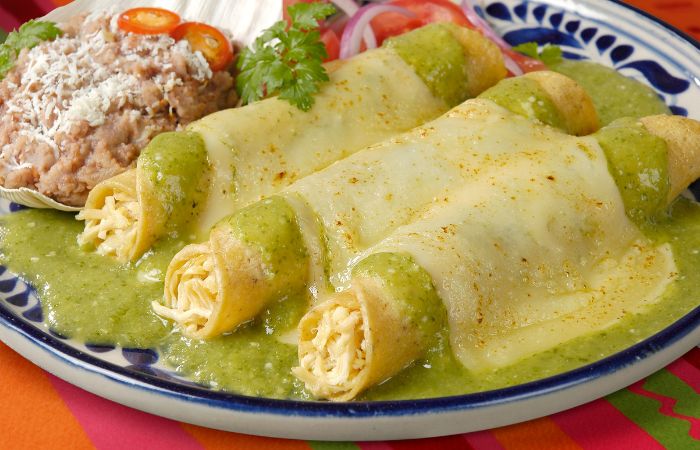 As with every other aspect of the city, the food in Mexico City represents many aspects of the city’s history. The best place for street food like quesadillas and tostadas is the Mercado de la Merced. But for less casual fare, there are plenty of local restaurants offering authentic Mexican food.

Hostería de Santo Domingo is the oldest restaurant in Mexico City, still in operation. They first opened their doors in 1860, and they still serve food in the same tradition. They’re known for their chile en nogada, a stuffed poblano pepper covered in walnut sauce.

Much of Mexico City’s traditional cuisine is familiar around the world: tacos, enchiladas, gorditas, and pozole. There are plenty of local taquerias throughout the city where you can find any of these time-honored dishes.

Mexico City isn’t just Mexico’s largest city; it’s also one of the most vibrant and historically rich cities. Because it has remained the seat of power for centuries as various groups took political control of the area, it’s a city full of cultural traditions.

From the floating gardens in Xochimilco to Frida Khalo’s home in Coyoacán, Mexico City is a living monument to Mexican history. The city’s dedication to its past and present is clear in its numerous museums, expansive parkland, and diverse cultural traditions.