Top 18 Things St Louis is Known For and Famous For 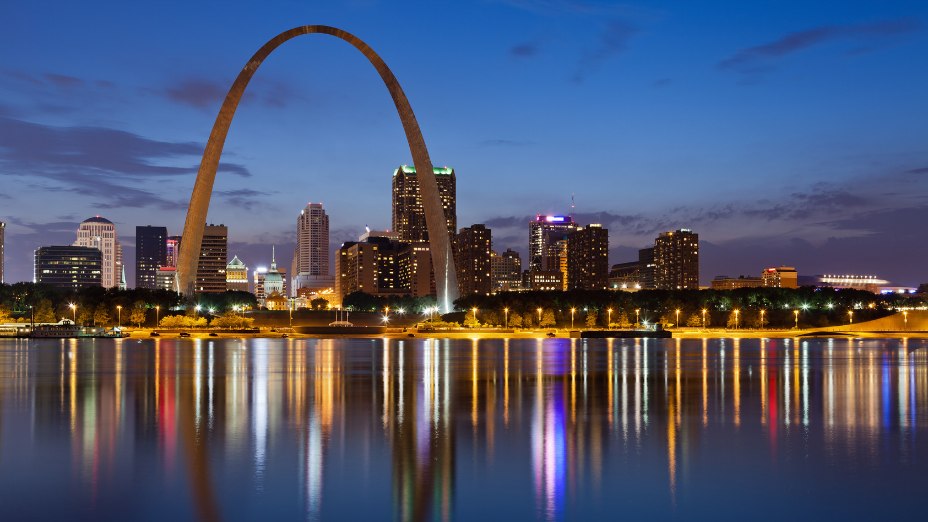 What Is St. Louis Known For?

In its over 200-year history, St. Louis and its people have accomplished plenty in art, architecture, culture, athletics, music, and food. The city sits on the Eastern edge of Missouri, where the Mississippi and Missouri rivers merge, just over the border from Illinois. But what is this city known for?

St. Louis is known for steamboats, the 1904 World’s Fair, the Gateway Arch, unique foods and it’s music scene. From breweries, baseball, and shoe factories to sculpture gardens and historic landmarks, St. Louis is a city with a rich past and an exciting present. The “Gateway to the West” is also the gateway to the future.

St. Louis is the city with the most free visitor attractions in the United States, outside of D.C., so no matter what you’re interested in, St. Louis has it. This guide will give you an overview of all the best things St. Louis has to offer, whether it’s your first visit or your fiftieth. 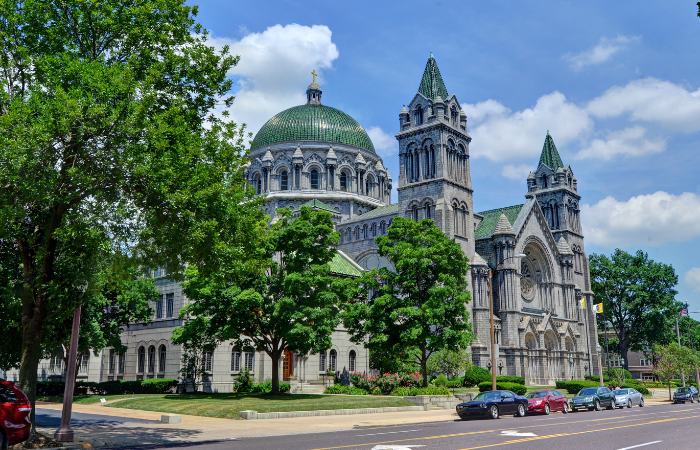 St. Louis was established as a city in the 1760s by French traders. There was confusion over which colonial government was in charge of it–either the Spanish or the French–until 1800, when France officially took control just before selling it to the United States in 1803 as part of the Louisiana Purchase.

As St. Louis was the western-most city in the new territory, it became known as the “gateway to the west,” a nickname that perpetuates today in the famous Gateway Arch. Lewis and Clark also launched their expedition from St. Louis, solidifying the gateway legacy.

Because of its location on two large rivers, steamboats were a large part of St. Louis’ trade and city identity beginning in the early 1800s. In 1904, St. Louis hosted the World’s Fair and the Olympics, bringing international attention to the city and spurring the development of many cultural attractions that still stand today.

By the 1930s, St. Louis had a reputation for beer brewing and shoe manufacturing. For a time, the city’s nickname was “First in booze, first in shoes, and the last in the American League,” referring to the Budweiser Brewing Company, the International Shoe Company and Brown Shoe Company, and the baseball team the St. Louis Browns. Eventually, the Cardinals baseball team would make that nickname inaccurate.

The most well-known symbol of the city of St. Louis is also its most prominent landmark: the Gateway Arch. However, a handful of other important pieces of architecture and parkland in the city give St. Louis its unique character. 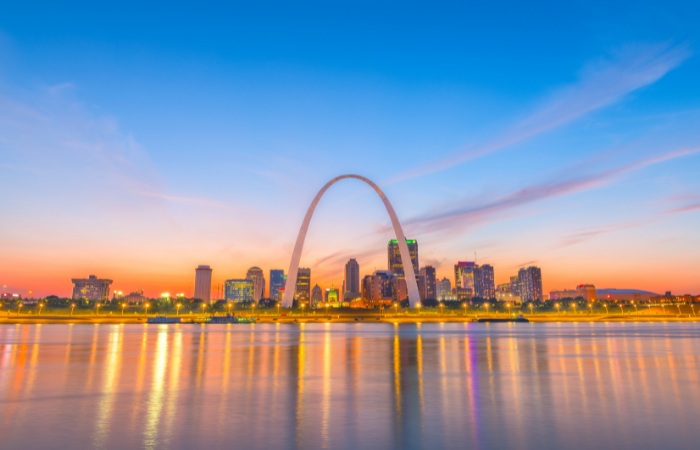 The Gateway Arch was built in 1965 to commemorate St. Louis’ role in the United States’ westward expansion. It’s the tallest arch in the world and the tallest man-made monument in the Western hemisphere.

The arch stands near the banks of the Mississippi River near the Old Courthouse. Both landmarks are part of a small park: the Gateway Arch National Park. A recently completed museum about the history of the arch’s construction and the westward expansion of the U.S. sits at the arch’s base. 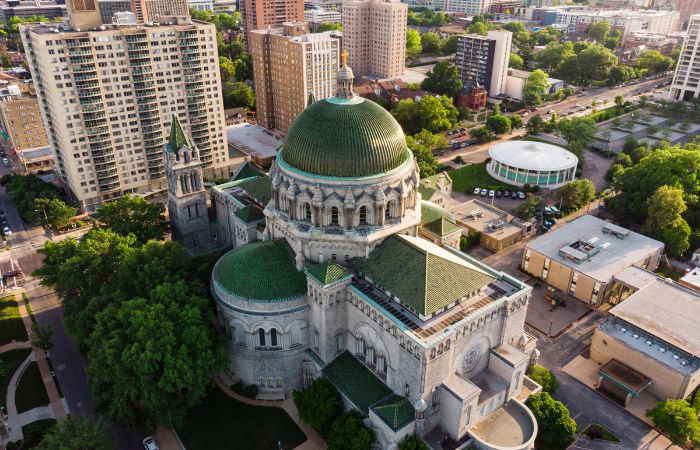 The Old Courthouse in the Gateway Arch National Park is another important landmark, not just for St. Louis but for the whole country. That courthouse was the location of the famous Dred Scott case, where Dred Scott sued for his freedom and the freedom of his family. While the Supreme Court eventually overturned the case, Scott was successful in St. Louis at the Old Courthouse.

Another important St. Louis landmark is Forest Park, the 1904 World’s Fair site, titled the Louisiana Purchase Exposition. Many of the structures still standing in the Park are from the Fair. St. Louis hosted the 1904 Summer Olympics in conjunction with the Fair.

Before the construction of the Gateway Arch, the Eads Bridge was the enduring symbol of St. Louis. Built in 1874, it spans the Mississippi River connecting St. Louis to East St. Louis, Illinois. According to Explore St. Louis, it “was the first arched steel truss bridge in the world” and an important connection to trade in the eastern United States. The bridge still stands today, with a rail line and a road for car traffic. 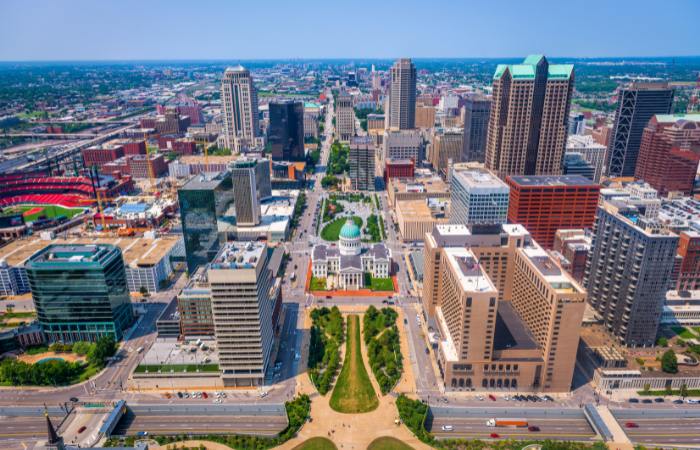 While St. Louis doesn’t have the same music culture as a city like Nashville, it has been home to some of the world’s best ragtime and blues musicians, as well as one of the oldest symphony orchestras in the United States. It’s also the city where famed rock and roller Chuck Berry and iconic R&B singer Tina Turner got their starts.

While he’s not originally from the city, Scott Joplin lived there from 1900 to 1903. The Scott Joplin House stands today as a state historic site and National Landmark. Joplin was the founder of ragtime music and wrote some of his most famous pieces in St. Louis.

St. Louis is also the home of the National Blues Museum, which celebrates blues as the foundation and origin of modern American popular music. Both the Blues Museum and the Scott Joplin celebrate the enormous cultural influence of African American musicians on American music as a whole.

Joseph Otten founded the St. Louis Symphony Orchestra in 1880, making it the second oldest professional orchestra in the United States. It has won nine Grammy awards out of a total of sixty nominations. In addition to the orchestra, the organization also maintains two choral groups, the St. Louis Symphony Chorus and the IN UNISON Chorus, making space for classical music in the city alongside popular music. 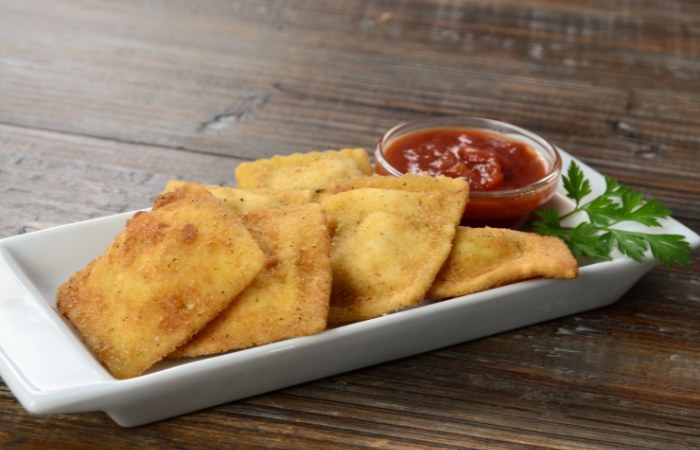 Like many major metropolitan areas in the United States, St. Louis has a variety of unique culinary staples that give the city its flavor. From brands recognized nationwide to new takes on old favorites, St. Louis cuisine has something for every foodie to try.

A well-known city staple is the Ted Drewes Frozen Custard shop on Route 66. It’s been in operation for over 80 years. The family-owned ice cream store is famous for its concrete milkshakes, so thick that they’re served upside down. In the winter, the Drewes family sells Christmas Trees and hot chocolate when it’s too cold for ice cream.

If you’re not ready for dessert yet, you can always try some St. Louis Style barbeque. More than a dozen local restaurants offer the city’s take on a Southern tradition. St. Louis barbeque usually refers to a flat rack of ribs that’s grilled rather than smoked, served with a very sweet, tomato-based sauce. The cut and cooking methods are different from most other American barbeque styles, so you’re sure to taste something new.

Another quirk of local cuisine is the gooey butter cake. Rumored to have originated in the 1930s in a bakery mix-up, this dense, sweet cake is served as a breakfast pastry or coffee cake rather than a dessert. It’s dusted with powdered sugar instead of iced, and as the name implies, it’s full of gooey butter.

Some variants include cream cheese and yellow cake mix, and many local grocery stores, bakeries, and restaurants offer their own recipes for you to try.

Like the gooey butter cake, toasted ravioli is another favorite local cuisine born out of a mistake. Legend has it that a chef in an Italian restaurant in The Hill neighborhood accidentally dropped ravioli in the deep fryer. The restaurant served the pasta anyway, and customers liked it so much, they kept making it.

Two restaurants on The Hill claim to be the first places to serve the dish, Mama Toscano’s and Charlie Gitto’s. Regardless of who was first, toasted ravioli is on both menus today and at many other Italian restaurants around the city.

St. Louis also has its own take on pizza. Instead of slices, St. Louis pizza is cut into squares to better support the weight of all the toppings they pile on. This style of pizza has an incredibly thin yeast-free crust, similar to a cracker, and all the toppings are held together with Provel cheese. Provel cheese is a processed blend of white cheddar, provolone, and Swiss cheeses with a low melting point, making it easy to bite through. 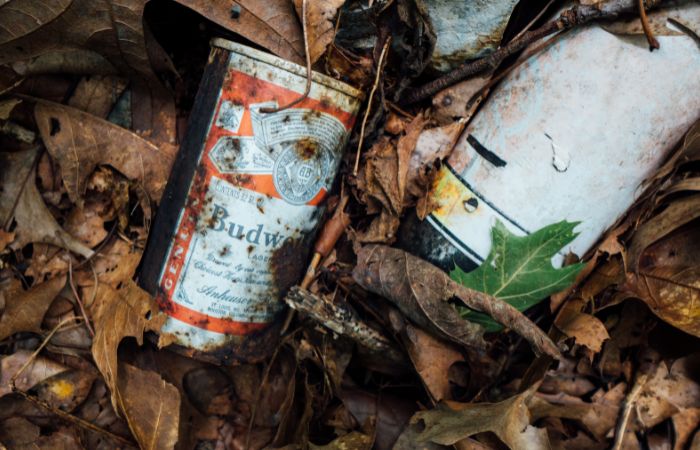 So what should you wash a meal of St. Louis pizza and gooey butter cake down with? Beer, of course! In 1852, George Schneider opened a brewery in St. Louis that would eventually become the Anheuser-Busch company, the same brewery that manufactures Budweiser beer.

The company survived prohibition by selling ice cream and alcohol-free malt beverages and becoming the largest beer manufacturer in the United States by the 1950s.

Today, Budweiser is sold worldwide, and the spirit of beer brewing is alive and well in St. Louis. There are craft breweries in the city alongside the oldest Budweiser brewery site, which now holds a museum on the beer’s history.

One of the most important aspects of any city’s identity is its sports teams. For St. Louis, that means their baseball team, the Cardinals. The Cardinals have won 11 World Series titles and 19 National League titles, making them one of the most successful teams in Major League baseball.

The team first formed in 1882, then joined the National League in 1892 as the St. Louis Browns, then changed their name to the Cardinals in 1900. The Cardinals have a large and active fanbase to this day. 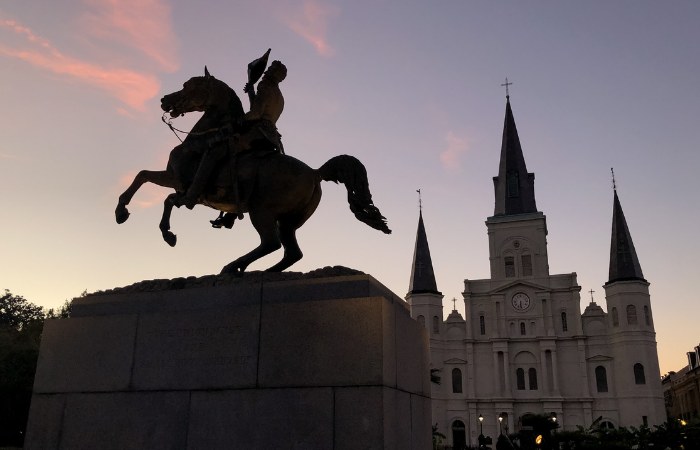 Last but not least in St. Louis’ identity as a city is its cultural institutions. St. Louis has museums, botanical gardens, and a zoo open to the public, many of them free of charge. The city prides itself on the variety of cultural experiences it offers to visitors for free, many of them dating back to the 1904 World’s Fair.

The Cathedral Basilica of St. Louis isn’t just a cathedral–it’s also home to one of the largest mosaics in the Western hemisphere. Between 1912 and 1988, artisans installed 41.5 million pieces of colored glass in the cathedral’s interior. There are 83,000 square feet (7,700 square meters) of mosaics depicting a range of religious scenes.

The cathedral also boasts a museum, a burial crypt, and an outdoor sculpture dedicated to racial justice, so there are plenty of reasons to visit the church even if you aren’t religious.

The Missouri Botanical Garden is a 79-acre garden and botanical research institute with the second-largest herbarium in the country. It’s also home to the largest traditional Japanese garden outside Japan and a climate-controlled geodesic dome conservatory.

Local businessman Henry Shaw founded the garden in 1859, and it has been part of the city’s museum district since 1983. It’s a popular spot for a number of the city’s cultural festivals and celebrations as well.

The St. Louis Zoo got its start in the 1904 World’s Fair as a bird aviary exhibit. It was one of the first zoos to feature natural-habitat exhibits, and it works closely today with conservationists to help save endangered species. Located inside Forest Park, the zoo is free and open to the public.

The City Museum is perhaps the most unique museum in the city. Built in the former International Shoe Company factory and warehouse, it’s part art museum and part playground. There’s a Ferris wheel on the roof and a circus ring on the ground floor, as well as a life-sized bowhead whale sculpture, a series of tunnels, and a five-story slide.

This museum captures, perhaps most accurately, St. Louis’s quirky spirit and the appreciation for its history that it carries into the future. 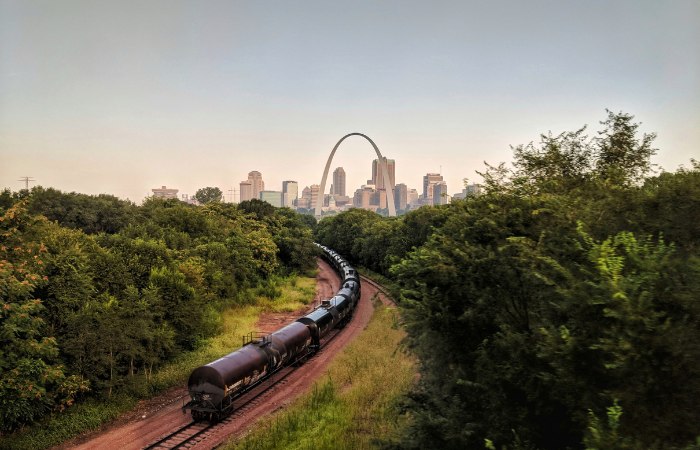 St. Louis has been known for many things throughout its 200-year history. The Gateway Arch secured the city’s legacy as the gateway to the west. Still, the city’s successful sports team, unique taste in food, commitment to public art, and rich brewing history make it so much more than a gateway.