Top 15 Things Albuquerque is Known For & Famous For 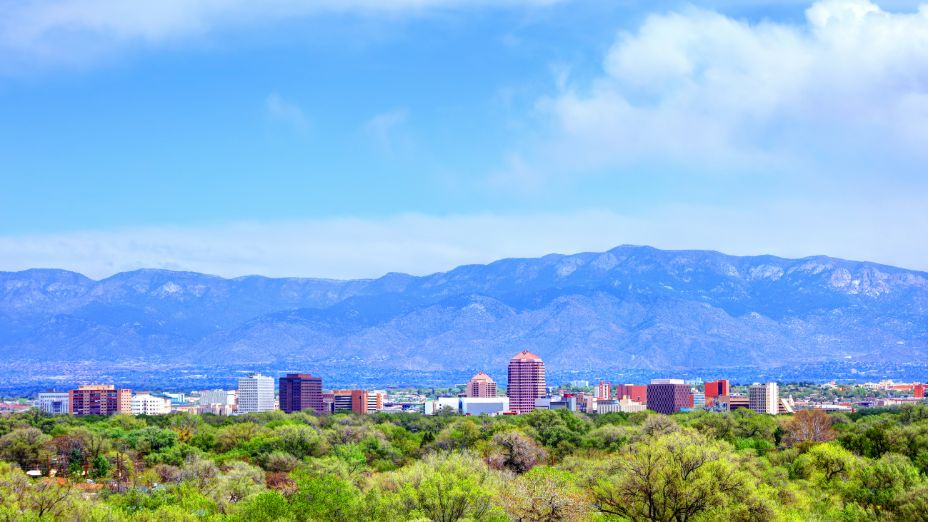 What Is Albuquerque, New Mexico Known For?

Albuquerque, New Mexico, is known for its hot air balloon festival, unique geography, watermelon-colored mountains and an exotic river. It is also known as a cultural center of the American Southwest, with its unique architecture and many museums.

If you’re planning to travel to Albuquerque, or if you’re just curious, you’re in luck. When you finish this article, you’ll have a great list of sights to see and places to visit. Read on to discover how you can get the best of everything Albuquerque has to offer! 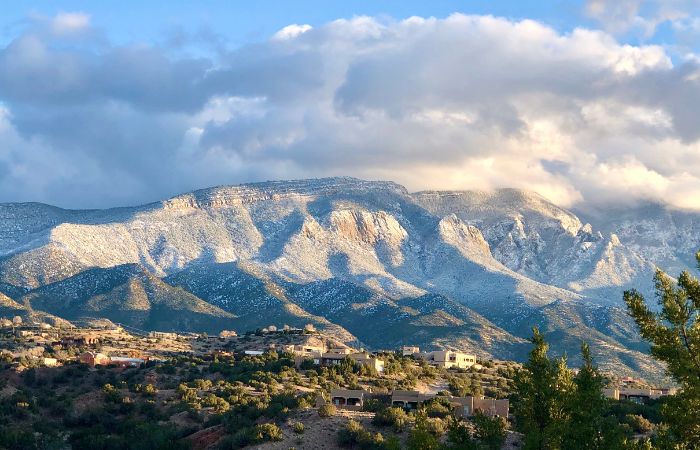 At 5,314 feet (1.61 km) above sea level, Albuquerque is the highest metropolitan area in the United States. The city is surrounded and intersected by a number of incredible geographic features, including the Rio Grande Valley and the Sandia Mountains.

Let’s take a closer look at these amazing geographical features! 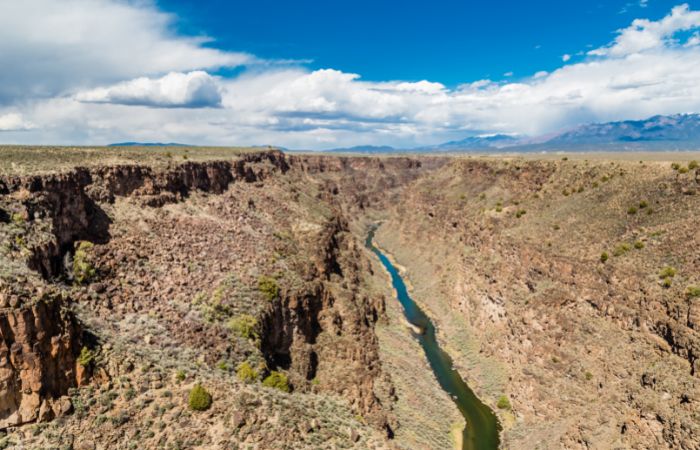 The Rio Grande is classified as an exotic river system, which flows right through Albuquerque.

Man has been tapping into the Rio Grande around Albuquerque for irrigation purposes for at least the last 1,000 years. It is also home to endemic species like the Rio Grande Cutthroat Trout.

The entire Rio Grande River ecosystem is very sensitive, and recent industrial activity has driven many species to the brink of extinction. Cities like Albuquerque have undertaken numerous initiatives to mitigate man’s effect on the ecosystem in response.

Albuquerque sits almost perfectly in the middle of the Rio Grande Valley, in an ecosystem called a bosque, which is a kind of “gallery” forest, or a concentrated area forested with a large variety of wooded plants. This area is also often referred to as the Albuquerque Basin.

The Albuquerque Basin is the biggest and oldest basin in the Rio Grande rift. It is incredibly deep, and it is more than 21,000 feet (6.40 km) deep at its lowest level. It is exactly what most people envision when they think of the American Southwest, filled with reddish sand and sagebrush and dotted with hardy wooded plants like sagebrush and juniper.

Animal life is sparse, but one species is iconic in America: the Greater Roadrunner.

Bird watchers can regularly spot this species around the outskirts of the city. Large predators like bobcats, black bears, and coyotes are also common, and visitors should always be on the lookout for the Western Diamondback Rattlesnake.

So if you happen to see Wile E. Coyote setting traps, you’ll know that the Roadrunner is around somewhere. Grab your binoculars and popcorn, because it’s going to be a great show!

The Albuquerque Basin covers more than 3,000 square miles (7769.96 square km) of New Mexico. Its geographical features range from alluvial plains to volcanoes, some of which are still mildly active.

The Albuquerque Basin is bursting with Paleo-Indian archeological sites, making it a research hotspot. Some of the sites are more than 12,000 years old and were inhabited by the Folsom people, a stone-age group of Native Americans. (But not the stone-age Flinstones.) 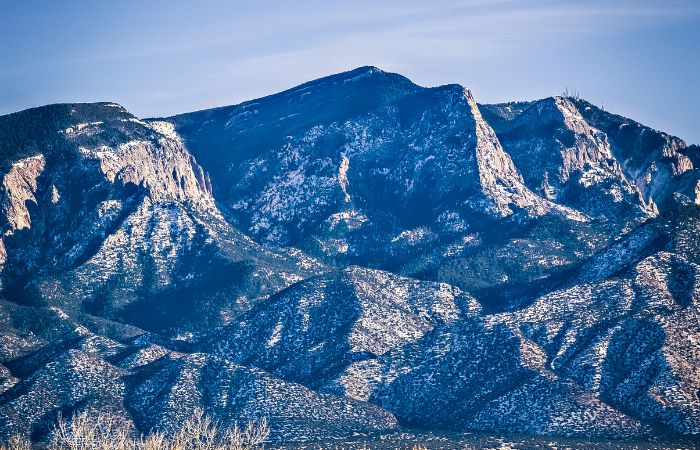 For a long time, people thought that early Spanish explorers named the mountains after the watermelon because of the pink stone (called granodiorite) and the bands of coniferous trees, the combination of which seemed to mimic the appearance of the watermelon.

A more likely explanation comes from the natives of the area, now called the Sandia Pueblo Indians. Spanish explorers mistakenly thought that squash growing in the area were watermelons and misnamed the range.

Unlike mountain ranges most of us are familiar with, which were formed by the collision and folding of landmasses, the Sandia Range was formed by a process called ‘rifting,’ or landmasses being forcibly pulled apart.

The sheer appearance of the Sandias’ rocky faces helps make this process apparent.

Putting aside the Mountain ranges etymology and formation, they are an aesthetically gratifying and ecologically diverse feature of the area. The beautiful pink stone is set off at dusk, giving Albuquerque’s surrounding an ethereal feeling.

The Sandia Mountains encompass four distinct “life zones,” each with distinct plant and animal life. These zones include:

These distinct zones give rise to a large diversity of species given the semi-desert climate, with trees ranging from Pinion in the lower elevations to white fir closer to the peaks. The Sandia Mountains also have significant archeological sites, including Pueblo villages that date back more than seven hundred years.

The Sandia Peak Tramway, America’s longest passenger tramway, takes tourists from the city itself all the way up to the peaks, a journey of more than 5,000 vertical feet (1.52 km).

The people of Albuquerque are known for their love of chile. Whether green or red, they love them both. From green chile cheeseburger to red chile enchiladas you can find all kinds of foods smothered with chile. Some of the top restaurants to check out based on customer revews are Cecilia’s Cafe and Barela’s Coffee House. 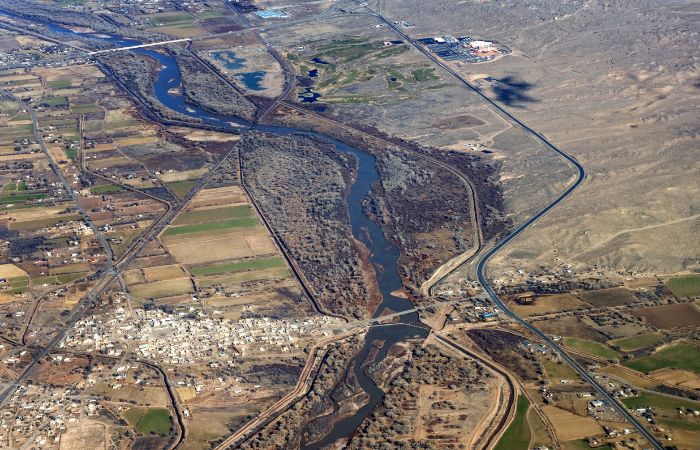 A Cultural Center of the Southwest

Albuquerque is a hotspot for academia and art in equal measure. Let’s take a look at some of these cultural attractions.

The University of New Mexico

The University of New Mexico is located in Albuquerque.

They also launched the first partner program with the CIA in 2016, providing students with a path to employment with the agency.

UNM is located centrally in downtown Albuquerque, and there are plenty of reasons for non-students to visit the campus. It is home to the University of New Mexico Arboretum, which maintains more than 300 species of woody plants native to the region.

There are also five libraries, and eight buildings on the National Register of Historic Places, including:

The school has a very active presence in sports, most notably their men’s basketball team, the Lobos, and their impressive arena, dubbed “The Pit.” 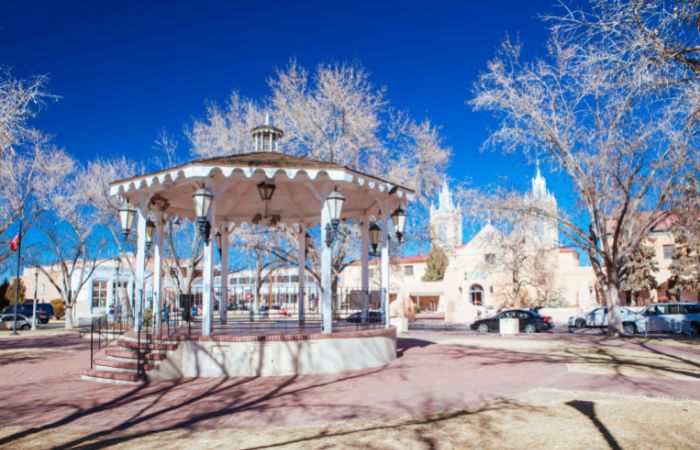 Albuquerque is host to a number of impressive museums and parks.

The Albuquerque Museum of Art and History houses an impressive collection of art specific to the American Southwest, along with historical artifacts such as full sets of conquistador armor and Pueblo weavings.

The New Mexico Museum of Natural History and Science is home to a permanent installation that illustrates New Mexico’s journey from the beginning of time to what it is today. The museum also houses a collection of fossils from the region, focusing mainly on Dinosaurs.

The Maxwell Museum of Anthropology, located on UNM’s campus, has permanent installations dedicated to showcasing human evolution and the development of regional cultures. 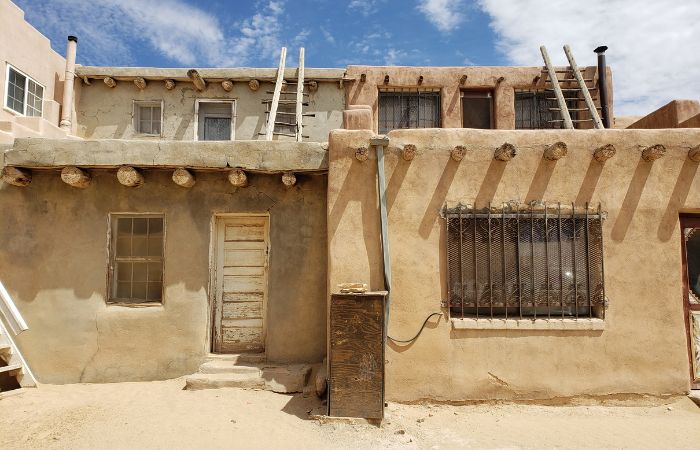 Albuquerque is known for its eclectic and robust architectural diversity.

In the 1930’s John Gaw Meem received a commission from the State of New Mexico to construct a series of buildings for the University of New Mexico. This work and a handful of other projects by Meem are seen as the origin of the Pueblo Revival style.

Often attributed to Santa Fe, the Pueblo Revival style had its beginnings in Albuquerque and is characterized by features from both Pueblo village architecture and Spanish Mission architecture.

Looking at a building in the Pueblo Revival style, such as the Estufa at UNM, gives you an inescapable feeling of being in the Southwest.

The city of Albuquerque has a unique nighttime skyline. Commercial buildings commonly light their buildings at night with bright yellows and greens, and many change colors with the seasons, giving the late-night city a bright and inviting feel. 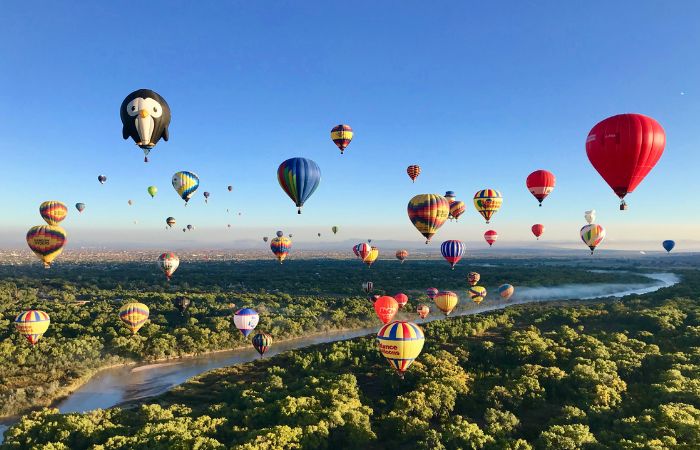 Aside from the museum and unique architecture, Albuquerque has other unique attractions that you will love. Make sure you make time in your vacation to visit these places.

The Fiesta began in 1972 when a local radio station decided it wanted to break the record for the largest hot air balloon gathering in the world, which was only 19 at the time. Today, the Fiesta regularly hosts upwards of 500 balloons.

There are a series of events taking place over nine days of festival activity, including:

There are also a number of other competitions and exhibitions throughout the duration of the Fiesta that varies from year to year. 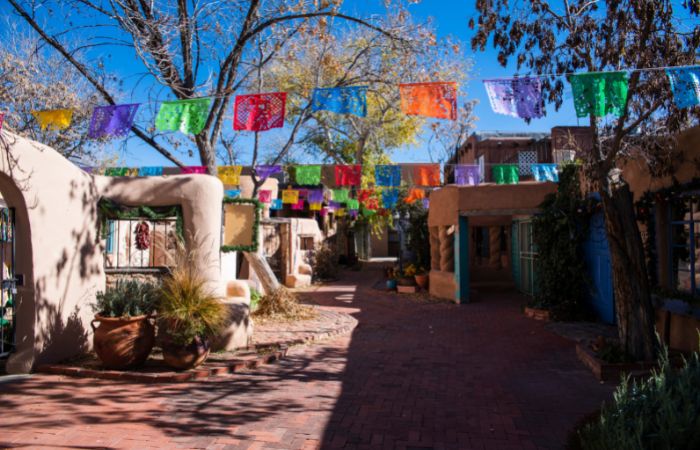 Old Town Albuquerque is a historic space in the city that encompasses the land area of the original settlement when it was still a part of the provincial Spanish kingdom, Santa Fe de Nuevo México. It was originally established in 1706 and was a part of Mexico until the United States captured it without resistance in 1846.

Albuquerque’s population boomed after the United States took it in the Mexican-American war.

Initially, Old Town Albuquerque was home to about 250 inhabitants. Interestingly, the original homes around the plaza in Old Town, some of which still stand, were only occupied on Sundays. For the rest of the week, the families lived on their farms.

The current space is filled with historic adobe buildings, including the San Felipe de Neri Church, built in 1793, and the Our Lady of the Angels School, built in 1878. They are both prime examples of Spanish Colonial architecture.

Today, thanks largely to the Old Albuquerque Historical Society, formed in 1946, the area is a popular tourist attraction and nighttime spot. Many of the original buildings have been repurposed to become shops and restaurants. 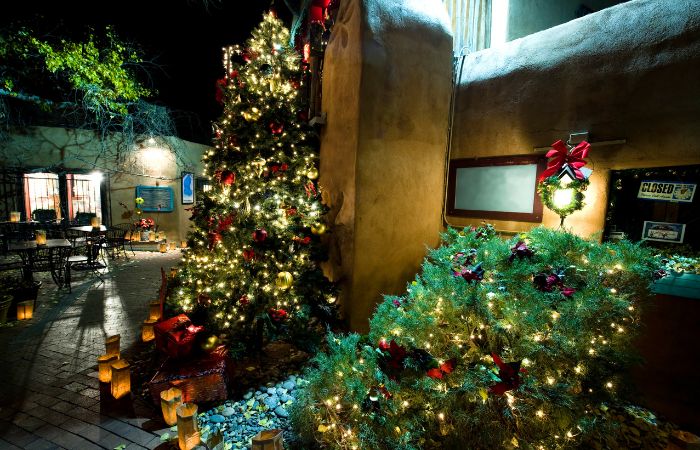 Albuquerque’s Spanish and Mexican influence has shaped its traditions in many ways. During Christmas, the city celebrates the season through several festive occasions known as Las Posadas. Collectively, Las Posadas is a nine-day celebration that signifies the nine months Jesus spent in the womb.

Albuquerque is one of the few places in the United States where you can see genuine luminaria during Christmas.

Traditionally small fires were lit along flat spaces in houses and along roads and paths to ring in the birth of Christ. Now, you are more likely to see brown paper bags filled with votive candles throughout December, which gives the town an ethereal glow all through the holiday season.

On Christmas Eve, it’s common to see groups of carolers dressed as Mary, Joseph, and the Angels, who sing to those indoors.

Traditional Christmas foods are unlike what we see in other major cities. In Albuquerque, Tamales, Posole, which is a soup made with hominy, and green and red chile stew are the most common holiday dishes.

The city also sets up a ‘river of lights’ in the ABQ BioPark Botanic Gardens that is open to the public.

Route 66, also known as the Main Street of America, run right through the heart of Albuquerque, making it an attraction in and of itself in the city. Route 66 runs along Central Ave, a great place for local shops, restaurants, and tourist attractions.

Albuquerque is know for its many casinos sprinkled throughout the city. From table games and slots to night clubs with events, there is much adult entertainment to be had here. Some of the most well known and popular casinos include: 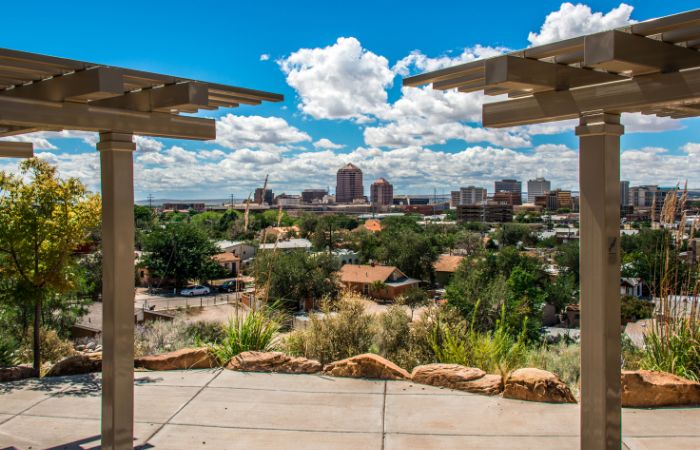 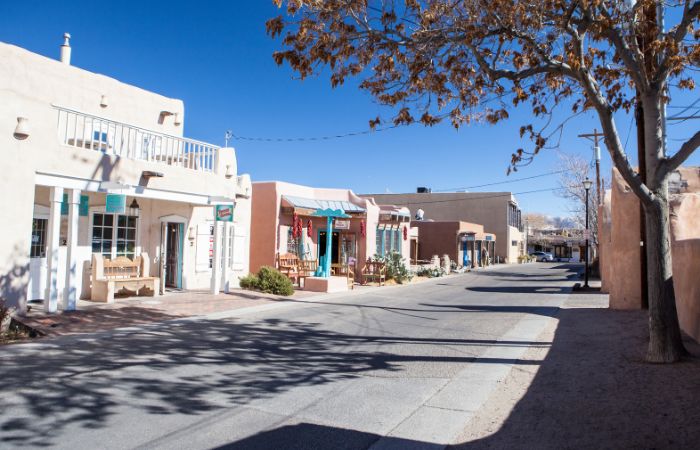 Albuquerque is a city with a number of unique aspects, geographical, cultural, academic, and artistic. The ecologically diverse surroundings mirror the diversity of the city’s culture, history, and architecture.

If you’re planning a visit to Albuquerque be sure to check out this guide on Amazon.