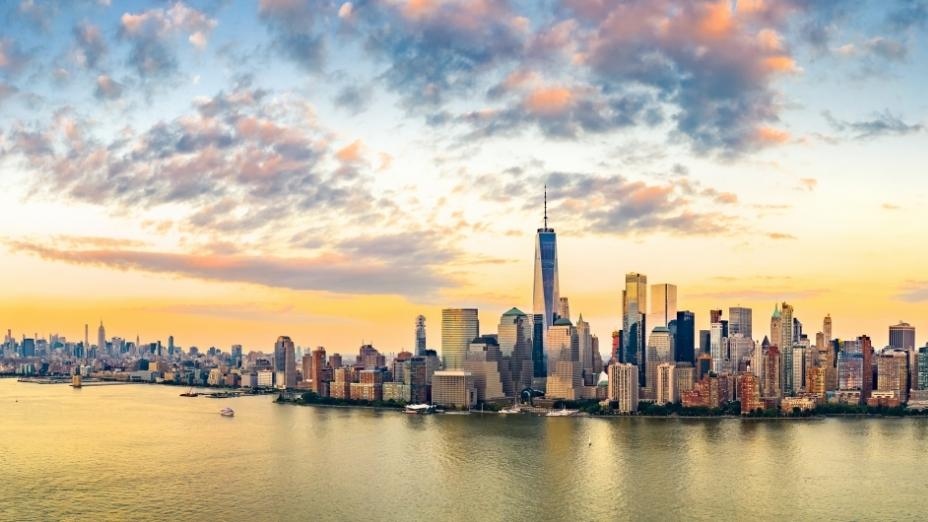 What is New York City, New York Known For?

New York City, NYC, is a culturally rich place. From where it’s located in the State of New York, this famous destination city has been featured in several films and television shows. In addition, there are many well-known landmark sites in the city that have gained a tremendous amount of worldwide recognition.

There are many things that New York City is known for, and this article covers its most popular features. So keep reading to learn more about this globally renowned place. 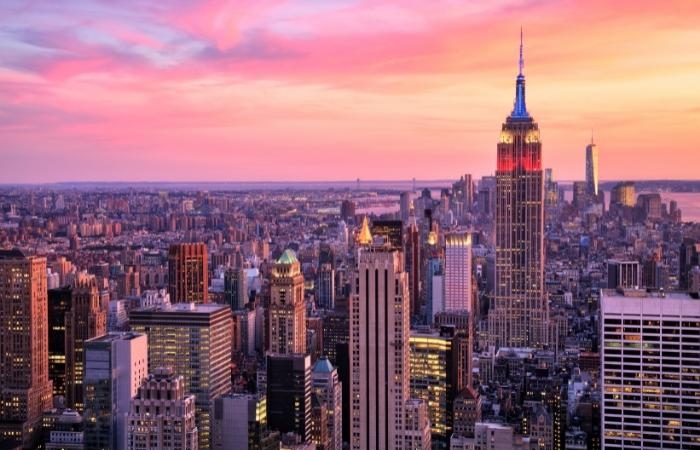 The Empire State Building, located in Midtown Manhattan, NYC, has been repeatedly featured in journals, magazines, movies, television shows, musical productions, and more. One great moment representing the 102-story tower in pop culture is in the 1933 King Kong film where a 24-foot ape fights off attackers atop the building.

In the field of photography, the Empire State Building holds the first position on our planet’s list of most photographed buildings.

It is the first of New York City’s five tallest towers to have been built, which was in 1930. You can measure the tower’s height in different ways. It measures 1,250 feet from the ground up to its 102nd floor and 1,454 feet with its antenna and spire.

Offering the Best View From the Observatory

It is possible to see six different states from the tower’s 86th-floor observatory in the right weather. These states include:

The observatory offers visitors a 360 view of the tower’s surrounding areas, and you can book reservations at a price range of $36 – $42. An Express Pass helps you cut the long line of visitors usually trying to access the observatory’s main deck.

The Empire State Building is open for visitors every day of each year.

However, to avoid being stuck in long lines and crowded rooms, it is best to visit the building in the early mornings or from 10 pm onwards.

The building offers free Wi-Fi to guests to use the mobile audio tour platform and get around the various floors independently. You can experience a virtual tour of the Empire State Building from the comfort of your home in this YouTube video. 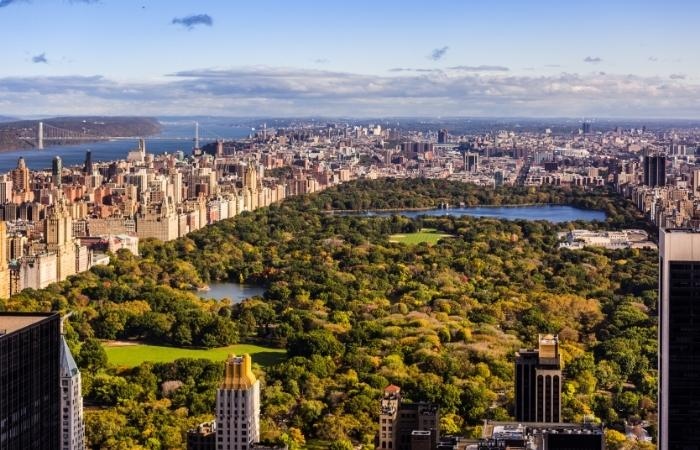 Central Park is a beautiful attraction, spanning 843 acres (341 ha), in New York City. The natural scenery has terrific features that people can tour on foot, bike, pedicab, and even horse carriage. These features include:

Officially, Central Park is a National Historic Landmark and holds the record for hosting the most visitors among urban parks in the United States. The New York City Department of Parks and Recreation says that Central Park hosts an estimated 25 million people each year.

Central Park has excellent facilities used by people visiting the park, which include:

Visitors can get more information about the park from these Central Park Contacts. The park is open every day and has its visiting hours between 6:00 am to 1:00 am. 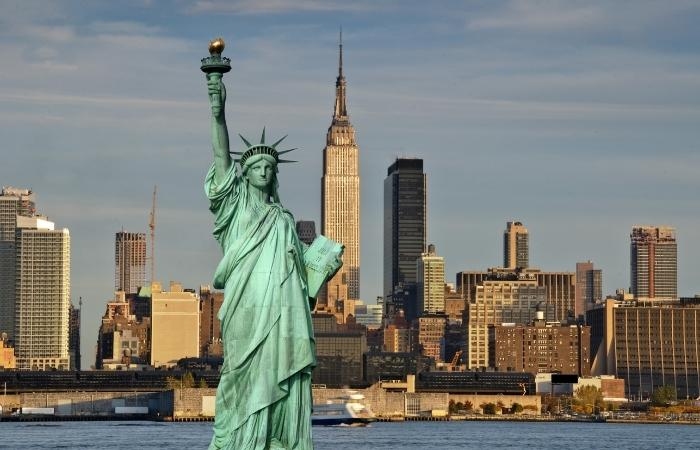 The Statue of Liberty, dedicated on October 28, 1886, is a gift to Americans from the French.

The 151-foot statue sits on a 154-foot pedestal on New York City’s Liberty Island. The figure represents a Roman liberty goddess, Libertas, and she poses with a torch held in her right hand above her head.

A tabula anasta featuring the United States’ Independence date is contained in her left hand.

Tourists can access the Liberty and Ellis Islands via ferries from New Jersey’s Liberty State Park and Manhattan’s Battery Park. Tickets needed to access the Islands are sold by the Statue Cruises, who are also in charge of getting visitors across in ferries.

Different activities are available for visitors to be a part of, as they can tour the extensive Liberty Island grounds on foot, take a trip to the Statue of Liberty Museum, and visit her crown and pedestal.

In addition, the Museum is home to Lady Liberty’s original torch and some other relevant artifacts that narrate the Statue’s history.

The Statue of Liberty-Ellis Island Foundation was founded in 1982 to preserve and restore both islands and their monuments. Over the years, projects undertaken by the foundation have been entirely funded by citizens of the U.S. 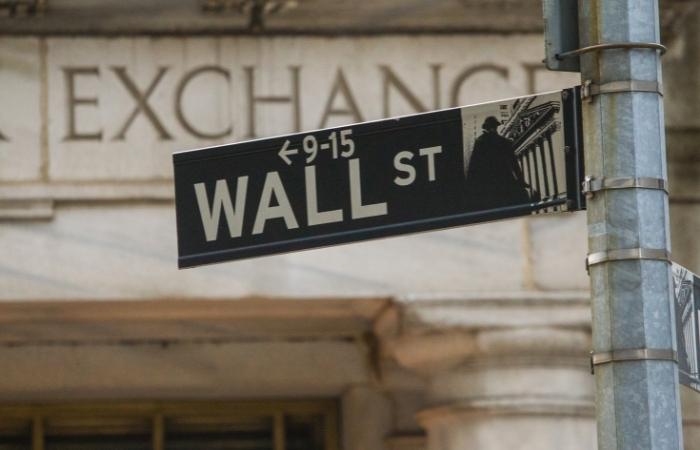 New York City’s Wall Street is one of the most famous cities in the world.

The former world’s tallest building, 40 Wall Street, also known as The Trump Building, is located on Wall Street. The enormous financial establishments on Wall Street add to its tremendous recognition and respect, and global giants like NASDAQ have their home on Lower Manhattan Street.

The 11-foot tall Charging Bull, a bronze sculpture, is another popular attraction just around Wall Street’s corner. Fearless girl (a bronze sculpture in front of the NYSE), Federal Hall, and Trinity Church are also excellent sights that draw many tourists yearly.

Tourists who wish to explore the length and breadth of Wall Street would find things easiest if they signed up with a guided tour, which is made available at affordable rates. 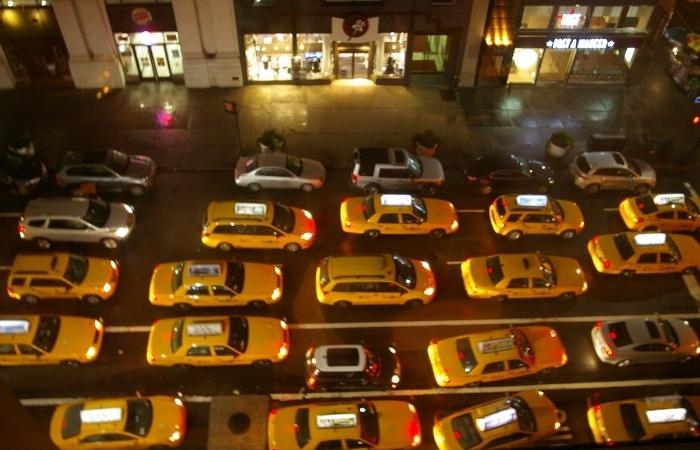 The Taxicabs of New York City are another popular distinguishing feature.

The taxicabs usually come in two colors, such as green and yellow. However, the Medallion Taxis, which are the yellow taxicabs, can be identified easily from T.V. shows and films that have scenes set in New York City.

By 1908, there were already 700 yellow taxi cabs functioning within New York. The Taxicabs of New York are still active to date, and you may very well ride in one on your trips within the famous New York City. 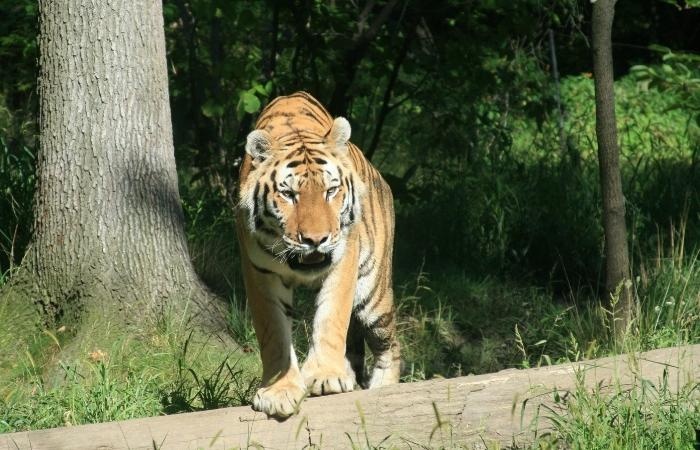 The Bronx Zoo, the United States’ largest metropolitan zoo by area, is a popular tourist attraction in New York City.

The Bronx River runs through the Bronx Zoo, which has millions of visitors annually, and it has more than 6,000 animal species on its 265 acres(107 ha) of land. This figure is much more than its original 843 animals when it first opened in 1899.

The Bronx Zoo has many exhibits available to guests. The displays feature an exotic collection of wildlife, and there’s something for everyone. The zoo’s Jungleworld, for instance, is a star attraction that has orange ebony langurs living in an Asian-type jungle.

Other Bronx Zoo exhibits include:

The Zoo Hosts Paid Events and Other Activities

The Bronx Zoo also plans and hosts paid events like birthday parties, weddings, formal galas, and even barbeques for its guests. Such events give people a chance to experience parties and events with nature/wildlife themes.

Wild Encounters is another experience available at The Bronx Zoo, which allows guests to get up-close and personal to some of their favorite animals. There are in-person experiences, virtual meet & greets, and exclusive virtual experiences that visitors can book. 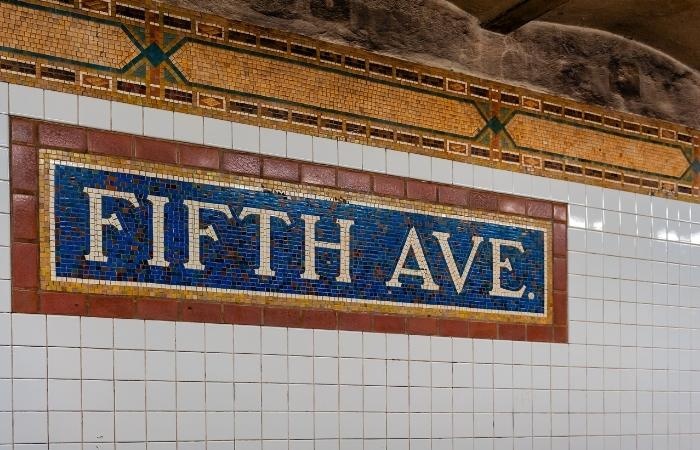 Brands like Versace, Prada, Gucci, Cartier, Armani, Tommy Hilfiger, and others have boutiques lined up on Fifth Avenue.

There are different ways to experience Fifth Avenue, such as luxury bus tours with harbor cruises, bike tours, and touring on foot. In addition, Fifth Avenue runs through some of the famous historic districts in New York City.

Some of these districts include Greenwich Village, The Upper East Side, Carnegie Hill, and the Historic District. 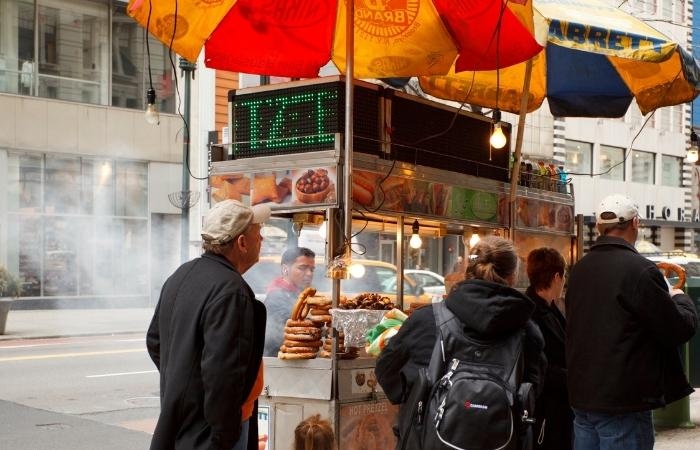 There are food carts all over the city where you can grab a quick bite to eat for relatively cheap. The food is delicious and is definitely worth trying while staying in New York. As a frame of reference, we had two gyros and a knish for $23 USD. 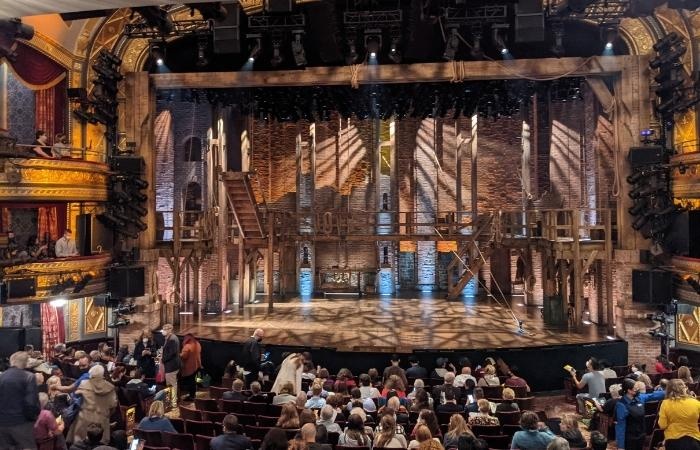 New York City is home to the famous Broadway Theatre where you can go to see many famous and well known acts. Broadway has it all, from new hits like Wicked, Hamilton, Book of Mormon, and the Lion King to classics such as Chicago, Moulin Rouge, The Phantom of the Opera, and more. 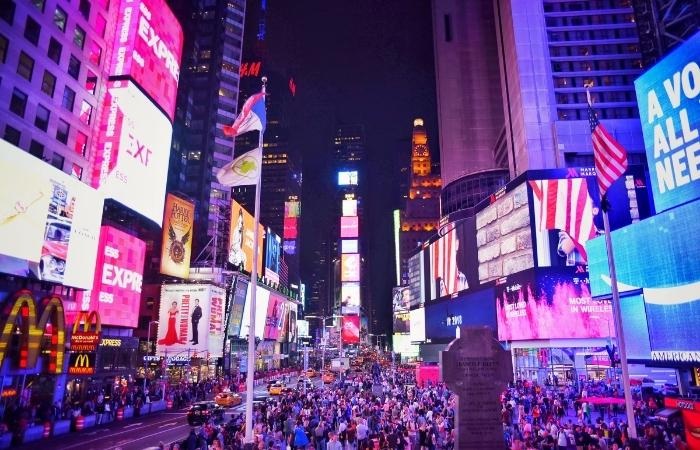 Times Square is a massive intersection in Manhattan, this spot is a tourist destination and entertainment hub. Time Square sees over 50 million tourists a year making it one of the most visited tourist attractions on earth. When walking through Times Square you are bombarded by billboards everywhere and street merchants trying to sell tickets to the various shows happening in the area. 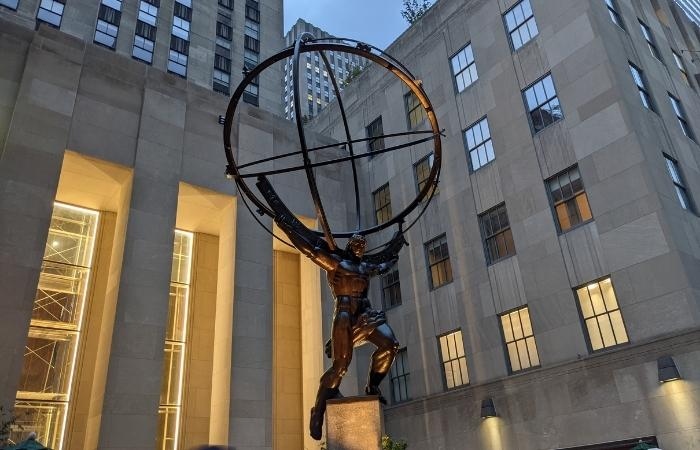 Rockefeller Center is most recognizable in the winter, when the city erects a massive Christmas tree and set up an ice rink for the people to come visit. However, that is not all that Rockefeller Center is known for as it is an important landmark at all times of the year. The center covers 22 acres of land with 19 commercial buildings and is one of the most well known commercial spaces worldwide. 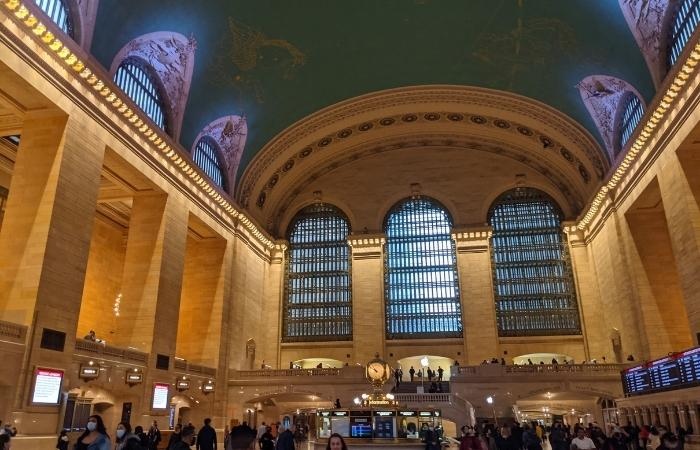 Probably one of the most recognized train stations in the world, Grand Central Terminal has been host to many movie and TV film crews trying to get that perfect shot. The name is not to be confused with Grand Central Station, which is the US Postal Office down the block.

The terminal is also home to many shops and dining options for those looking to browse or spend some time there. 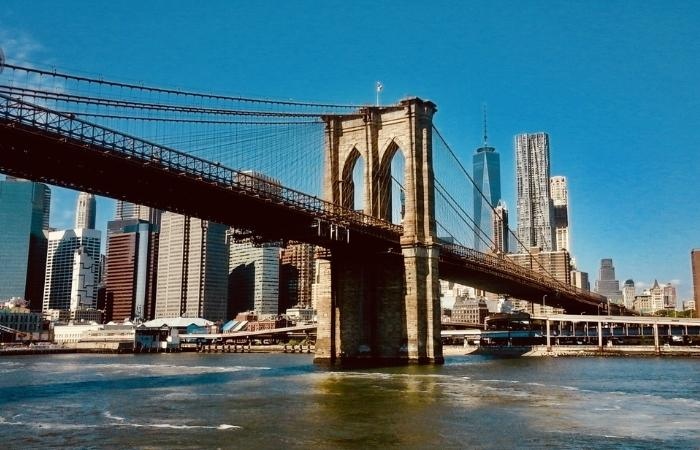 The Brooklyn Bridge is a suspension bridge that connects Brooklyn and Manhattan, which were two different cities in the 1800s. At the time of building (1863-1883) it was the world’s longest suspension bridge. Later, in 1898, Brooklyn became a part of New York City. 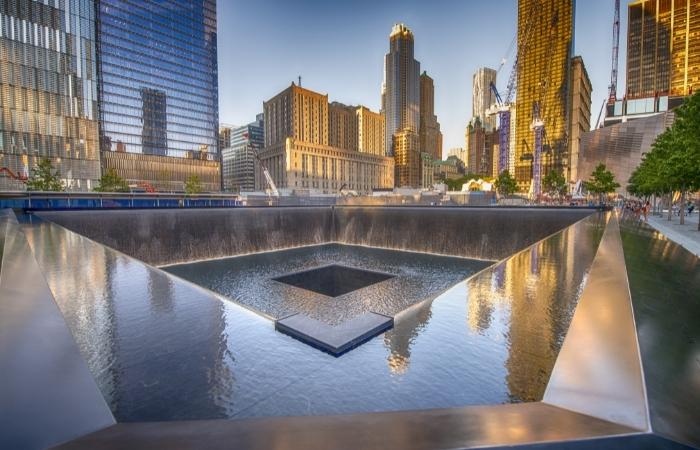 The tragic event shook the world and broke the hearts of many. The 9/11 Memorial and Museum was constructed after the September 11 attack and is located at the former site of the World Trade Center.

The places where the twin towers used to be are presently occupied by a pair of square-shaped pools, and many people gather around these pools yearly when visiting the museum.

The Museum, which opened to the public on May 21, 2014, is dedicated to honoring the September 11 attack victims as a symbol of strength and survival. The Museum is open to the public seven days a week.

Visiting hours are between 10 am to 5 pm.

Exhibitions available for guests include:

The Memorial Exhibition: In Memoriam, honors all killed victims of the September 11 terrorist attack. This exhibition features photographs of all 2,977 victims (including the six people who died in the 1993 World Trade Center bombing).

The pictures are arranged from top-to-bottom on walls within the gallery. This arrangement gives visitors a way of relating to the severity of the 9/11 attacks.

The pictures include kids, adults, and elderly individuals.

All through the Museum, you will find recovered artifacts, photographs, videos, personal stories, and interactive technology that narrates September 11. You can find out more about the 9/11 Memorial and Museum exhibitions here.

I’m sure you’ve heard New York City being called a few different things before. Things like The Big Apple, The City That Never Sleeps and Gotham City. 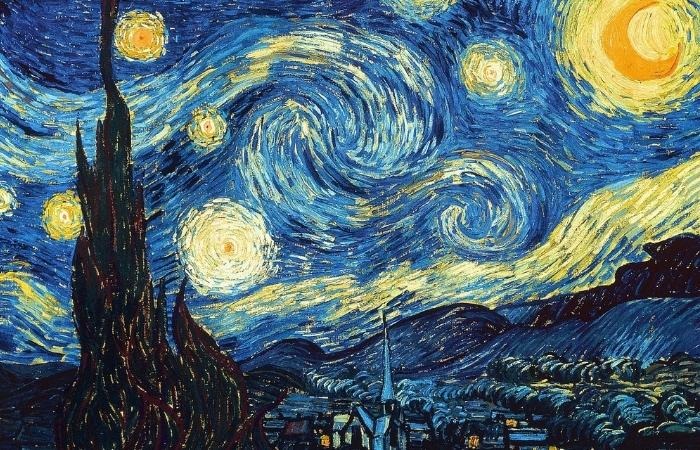 Vincent van Gogh’s famous painting Starry Night is located at The Museum of Modern Art in Manhattan, New York, New York. The Starry Night is one of the most well known paintings in the world. The painting is an abstract interpretation of van Gogh’s view of the night sky over a small hillside based on his view out of the asylum he was in. The village in the painting is of his own imagination.

New York City is a historical landmark and a pride of the American people. The great history is preserved through several monuments and artifacts within the city. In addition, New York City is visited by millions of sight-seeing tourists every year.

The city’s cultural, financial, and economic influence is remarkable. If you’re ever visiting New York City, there’s a lot you can do, so plan your time and book guided tours around your interests.

In summary, the many things that NYC is known for will keep you engaged during your visit there.