Top 17 Things South Dakota is Known For & Famous For 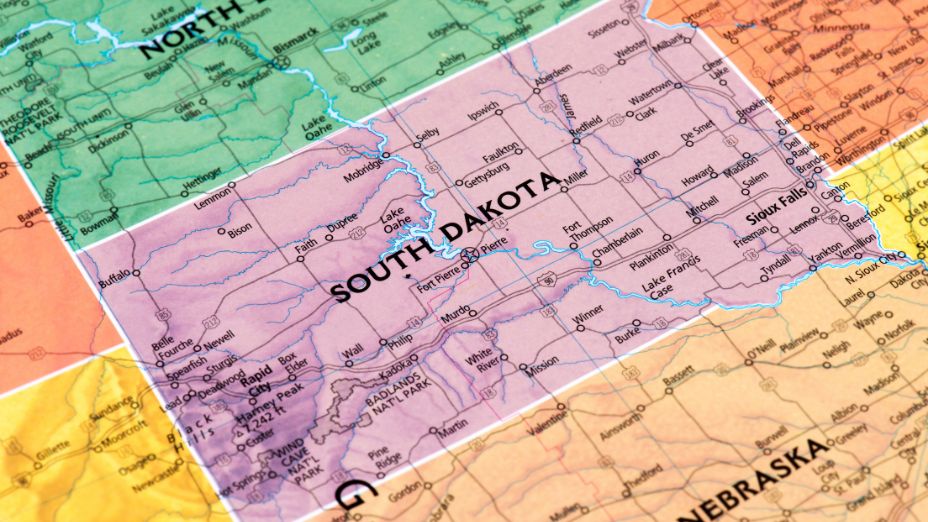 What Is South Dakota Known for & Famous For

South Dakota combines breathtaking natural beauty with a burgeoning economy and has much to offer both those who visit and those who choose to live in this beautiful state. Like many states, South Dakotan identity is exemplified by its monuments and resources. The state is located in the Midwestern U.S. and has various famous features.

Clearly, the region has some exceptional features for you to discover if you haven’t had the chance to visit this treasure trove of attractions.  In this article, I will explore some of its most iconic attributes. I will also briefly discuss each one and point out some interesting facts to better understand what makes South Dakota special.

State nicknames reflect the essence of the areas they designate, and South Dakota has two popular monikers.

South Dakota is officially nicknamed “Mount Rushmore State” after the significant landmark sculpture carved into Mount Rushmore. The landmark is one of the state’s most well-known attractions. The nickname also appears on the state flag.

Another popular nickname for South Dakota is the Coyote State. Though it’s not the official nickname, the Coyote is officially recognized as the state animal. Coyotes are populous among the regional wildlife that roam the various South Dakota terrains.

One of South Dakota’s most well-known landmarks is an immense sculpture.

Mount Rushmore is a large monument carved into the rockface of a South Dakotan mountain. The sculpture features four U.S. Presidents of significance.

According to the National Parks Service, artist Gutzon Borglum began the project in 1927 and chose George Washington, Thomas Jefferson, Theodore Roosevelt, and Abraham Lincoln. The four presidents represented the country’s most significant historical events. Upon his death in 1941, Borglum’s son took over the project and worked it to completion.

The iconic sculpture has brought fame to South Dakota as one of the USA’s most important sites. It has national and international recognition as a significant monument due to its unique form.

The settlement of Sioux Falls is another impressive landmark found in South Dakota.

Sioux Falls is a town located on the Big Sioux River. Falls Park is a popular tourist attraction on the river with iconic waterfalls.

The well-known Falls Park features an observation tower, sculptures, and outdoor recreation areas. Industrial ruins can also be explored, such as the Queen Bee Mill Ruin.

Additionally, Sioux Falls has the largest regional airport in South Dakota and is an essential destination for domestic travel.

South Dakota has a long-standing history of Native American culture that has shaped the state we know today.

Local Native American tribes remain pivotal in shaping South Dakota through tribal governments with reservation boundaries. A total of 9 tribes currently govern the area and have cultural roots extending back to pre-contact times.

The group of local tribes is known as the ‘Sioux Nation.’ Traditional practices such as porcupine quill, bead embroidery, bison hide making, and religious ceremony continue to be an essential part of South Dakotan life.

Native American culture is integral to the state’s heritage. Museums and art galleries often showcase tribal arts, and many landmarks have Lakota names. Celebratory ceremonies called Powwows are also conducted regularly and invite visitors from all over to join in singing and dancing.

South Dakota is full of iconic American terrains, such as the rugged landscape known as the Badlands in the Black Hills area.

Over the last million years, Badlands’ geological formations have been shaped by deposition and erosion cycles. You may observe various stone types intertwined between layers, creating a stratigraphy that tells the tale of time. Researchers can also use the geological layers to understand past climates.

Volcanic ash and ancient river sediments make up a large amount of the rock formations. The National Park holds some of the world’s most rare geology.

Another famous national treasure found in South Dakota is a windy cave complex.

Its highly windy entrance area is what inspired the name.

Remarkable fauna roams the park, including bison and elk. As well as hosting a unique natural feature, the highly biodiverse area has formed a natural wildlife sanctuary.

The cave was also the first to ever receive a National Park title.

Another famous South Dakotan National Park nestled in the Black Hills forms a beautiful playground for wildlife and adventurers alike.

Custer State Park is known for its mountainous terrain, clear waters, and granite peaks. , The park is a popular destination for a range of outdoor activities and stretches over 71,000 acres (287.33 square kilometers).

The park is frequented for its scenic views and pastimes such as:

Being the first and largest State National Park, nature enthusiasts have visited this majestic playground since the early 20th century. Its long history has brought the area national recognition and increased tourism.

The most popular attraction in the Northern Hills of South Dakota is a large gorge.

Spearfish Canyon is believed to be older than the Grand Canyon and is considered more majestic. The landscape includes limestone cliffs carved by running mountainous creeks.

The gorge is home to unique wildlife, including goats, deer, bobcats, and porcupines. Outdoor adventurers frequently take advantage of the scenic views and enjoy various activities such as rock climbing and fishing.

Sylvan Lake is considered the most recognizable lake in the Black Hills area. Its scenic surroundings and natural water resources are well-loved by locals and tourists.

Special celebrations such as weddings are often held on the lake shores, taking advantage of its scenic backdrop.

The historic Sylvan Lake Lodge, made of stone and timber, remains a frequented destination for explorers. Nearby, famous hiking trails from the lake to the iconic Black Elk Peak. The lake also makes for a great watersports arena.

Most of the landmarks mentioned above are part of a group of famously admired natural landscapes found in South Dakota.

Named after the Lakota words for “hills that are black,” the area has strong ties to Native American ceremonial practice. The forests were once considered sacred and linked to human use as far back as 10,000 years ago.

In modern times, millions of visitors explore the reserve each year.

An extremely rare heritage site continues to attract visitors to South Dakota. Featuring conical-like structures and made of fossilized wood, this twentieth-century spectacle is intriguing, to say the least.

Architect S. Olaf Quammen built petrified Wood Park in 1933 to serve as a commerce center and museum. In 1977 the site was recognized for its unique form and was added to the National Heritage Register.

The site continues to serve as an intriguing museum and tourist attraction.

South Dakota is famous for its paleontological discoveries, which have included an extensive collection of dinosaur fossils.

Experts have identified the state as having one of “the richest fossil beds in the world.” Fossils found in the area have provided a window into the past and helped generate an understanding of ancient species.

Today, the area is considered the “birthplace of vertebrate paleontology in the American West.” Original finds from the early days of paleontological research in the state have remained on show at major institutions such as the Smithsonian in Washington, D.C.

South Dakota is famous for its naturally diverse landmarks, as well as for its booming agricultural industry.

Agriculture is considered the top industry in the state. It also makes up a significant part of the South Dakotan way of life. 1 in 5 jobs can be attributed to the industry, and in 2021 alone, it generated 129,753 new agriculture jobs.

In 2017, 11.9 million acres (square kilometers) of farmland were planted with field crops, placing South Dakota in the top 10 producers nationally. The state has also been ranked number 1 in the U.S. for the farming of Bison and Oats.

South Dakotan agriculture plays a significant role both within the state economy and the wider nation.

With so many majestic geographic spectacles, it’s no surprise that mining is a major industry in South Dakota.

South Dakota is one of the nation’s leading mineral producers. Minerals such as gravel, gypsum, and lime are mined throughout the state. Gemstones and rare minerals such as gold and silver are also significant commodities for South Dakota.

Historical mines such as those listed on Travelsouthdakota.com are also popular tourist attractions. They allow recreational gold panning and provide insight into the state’s extensive mining history.

According to the U.S. Energy Administration Association, in 2020, the state produced 161.4 trillion Btu (British Thermal Units) in biofuels and 97.2 trillion Btu in non-combustible renewables. South Dakota is also among the top states in-country for renewable resource electricity generation.

A sizable carved monument in South Dakota continues to draw attention to the important issue of Native American reconciliation.

The Crazy Horse Mountain Carving is 641 feet (195.38 meters) long and 563 feet (171.91 meters) high. It’s carved out of a pegmatite granite mountain face in the middle of the Black Hills. The monument was initiated by sculptor Korczak Ziolkowski and Lakota Chief Henry Standing Bear.

Construction has continued throughout the late 20th century.

A board of directors currently oversees the monument’s management. Their mission remains “to protect and preserve the culture, tradition and living heritage of the North American Indians.”

The Corn Palace in Mitchell, SD

The Corn Palace is a complex dedicated to the strong agricultural industry of South Dakota. It is regularly decorated with corn-themed decor and attracts over 500,000 tourists annually.

Today, the complex is used as an entertainment quarter and major tourist attraction. However, the palace was first established in 1892 during the early settlement of Mitchell’s main street. Its extensive history has brought the landmark international attention.

South Dakota has an extensive range of natural landscapes and abounds with a diversity of natural features for visitors to enjoy. Coupled with the natural abundance, South Dakota has a burgeoning economy for those who choose to make this iconic state their home.

The area also resonates with history, from archeological wonders to a strong Native American cultural legacy. For sure, the Coyote Nation has something to offer anyone lucky enough to visit this iconic state.