Top 28 Things Indiana is Known For & Famous For 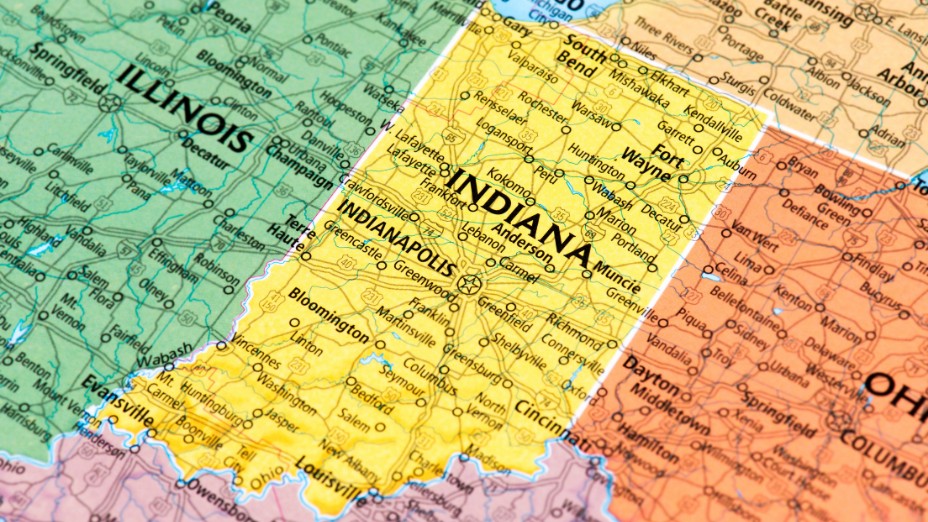 What Is Indiana Known For & Famous For?

Indiana is in the center east of the United States, located between Illinois and Ohio and under Michigan. This was the 19th state added to the US and has a population of 6.73 million people. Indiana is known for dozens of other things beyond its basics.

Indiana is known for its capital Indianapolis, the University of Notre Dame, and many state parks. Additionally, you can find Holiday World amusement park and the biggest children’s museum in the world in Indiana. It is also famous for its college and high school teams.

Indianapolis is the capital city of Indiana, with a population of over 800,000 people, which is located directly in the middle of the state. There are dozens of things that make Indianapolis unique, including the Indy 500 and the Indianapolis Colts.

The Indianapolis Colts are a professional football team that plays in the Lucas Oil Stadium located in Indianapolis.

Additionally, the Indiana Pacers play in Indianapolis, just down the street at the Bainbridge Field House. The Pacers have nine division titles and have famous rivalries with the Detroit Pistons, New York Knicks, and Miami Heat.

Beyond the modernness of its big cities, Indiana is known for its vast farmlands, with 80% being either farmland, forest, or woodland.

Some additional stats about Indiana’s farmlands are:

Indiana is known for its farm production and has an FFA (Future Farmers Association) located in nearly every county and city.

The Indy 500 famously takes place in Indianapolis, Indiana. This sporting event, also called the Indiana 500, takes place every year around May and showcases race cars that go nearly two hundred miles per hour.

This yearly event brings in nearly 300,000 people for viewing, and the following video shows the pageantry:

If you like motor racing, the Indy 500 is surely an event that will entertain and astonish you.

The largest steel mill in all of America is in Indiana. The mill, called the Gary Works mill, is just one of many steel mills located in Indiana. That would explain why Indiana is the top US state in steel production year after year.

The University of Notre Dame is a historic university known for academics and sports. Notre Dame is located in Notre Dame, Indiana, which is in the northernmost part of the state, close to the Michigan border and Lake Michigan. However, the town of Notre Dame sits within the larger city of South Bend, Indiana.

Notre Dame is a private catholic university, meaning it is not funded by government or state entities.

The University of Notre Dame has the colors blue and gold and the mascot Fighting Irish. They have a D1 football team and basketball team, both of which are often ranked as top-tier. Academically, Notre Dame is ranked #19 in the US.

This video gives a brief tour of the campus:

They are also well-known for their science graduate programs, including Physics.

For extremely talented and intelligent students, they offer an attractive scholarship and stipend package. Grad students who otherwise couldn’t afford higher education can get a chance, especially through the McNair Scholars program, which helps them with a full-ride scholarship and a decent stipend for nine months per year.

They also give grad students a per diem for entertainment purposes, such as the Indy 500.

Overall, people of the state love basketball, whether it be high school, college, or professional.

Indiana is home to numerous state parks, including:

State parks are funded in part by state governments to ensure the conservation and upkeep of the land.

Clifty Falls State Park is located in Madison, Indiana, and welcomes over 300,000 visitors. The park allows camping and lodging as well as hiking for day use. Additionally, visitors can go swimming or on a picnic here.

Indiana Dunes State Park is in the northern part of Indiana with over 2,000 acres. At this park, you will find a large beach on the coast of Lake Michigan. This video explains what Indiana Dune state park looks like:

In addition to the beach and all of the land, you’ll find several native trees.

Turkey Run State Park was voted the number one most loved state park in all of Indiana. This state park has inns, cabins, and campsites for visitors who want to stay on the land. Additionally, you can find hiking trails, fishing, canoeing, kayaking, swimming, horseback riding, and a nature center at Turkey Run.

Many people don’t associate Indiana with winter sports such as skiing. However, Indiana is known for getting a good amount of snow just like the rest of the Midwest.

Those who like to ski or snowboard can visit the Perfect North Slopes Ski Resort for a stay and some skiing. Though there are no mountains in this location, the slopes make an adventurous addition to your typical ski routine.

Not only do Indiana visitors like to ski and snowboard for recreation at the North Slopes Ski Resort, but the resort also hosts several competitions. However, if you are less than excited about going skiing or snowboarding, you are also welcome to stay at the lodge.

Wabash, IN – First Electrically Lit City In The World

Wabash, Indiana, was the first electrically lit city in the entire world.

On March 31, 1880, candle-powered arches lit the Wabash Courthouse, which were invented by Charles F. Brush, a native of Cleveland, Ohio. The city of Wabash celebrates this event each year.

The Town of Santa Claus is another staple of Indiana. This city names itself the “Christmas Hometown” of America and draws dozens of Santa Claus statues in various parts of the city.

This video shows an inside look at Santa Claus and tells the story of how it got its name:

Originally, the town was called Santa Fe, but it was too close to another Santa Fe in Indiana. In Indiana, the Santa Claus post office receives all letters written to “Santa Claus.”

Indiana is often called the Hoosier state. The University of Indiana has “Hoosiers” as its mascot, but the term Hoosier goes farther back than college sports teams.

There are a few theories that the name was used colloquially by early settlers of Indiana, by those referring to people from Indiana, or even by combining terms like “who’s here?” or “who’s ear?”.

However, the most official definition of the term goes back to a nickname by southerners.

In addition to Indiana residents being called Hoosiers, many refer to the Indiana University team and its fans solely as “Hoosiers.” Though people from all over the country define Hoosiers differently, former Indianapolis Colts punter Pat McAfee defines it as: “a human who is willing to stand up in the face of adversity, chug two beers, and do anything he can to make America a better place.”

The first professional baseball game was hosted in Fort Wayne, Indiana, by the Fort Wayne Kekiongas and was won by the Indiana team. This took place in the late 1800s and was advertised in the Fort Wayne Daily Gazette.

The Gasoline Pump Was Invented Here (in Fort Wayne)

The gasoline pump was invented in Fort Wayne, Indiana, by Sylvanus Freelove Bowser. Originally, he had made the pump to help with kerosine, but eventually, as cars became more popular realized he could use it to easily get gasoline into a car.

Indiana is known for several industries, each slightly different from the next. In Indiana, you can find great examples of:

As mentioned above, a good deal of Indiana is dedicated to farmland. However, this doesn’t mean this state is strictly dealing in agriculture. Indiana is number two in automobile production.

Indiana is second in the US for automobile production and brings in nearly $102 billion each year in car sales. The automotive industry in Indiana continues to grow as the state funds STEM education for young learners in hopes that more and more young engineers will call the state home.

As mentioned above, Indiana has tons of farmland and produces many crops that are distributed all over the US. Indiana exports:

They’re well known for their contributions of corn to the national economy.

Indiana produces nearly $5.6 billion worth of corn each growing season. The production of corn in Indiana has gone up steadily since 2018. Indiana is the fifth-ranked state in the US for corn production.

The American legend of Johnny Appleseed is based on a real man who was a reverend. He lived in Indiana and died a resident of the state. Johnny Appleseed was said to have traveled around the country, leaving apple seeds to help grow trees.

The Monon Trail is a bike trail in Indiana known for giving bikers a large trail to enjoy and leading them to some great locations in the city. This trail is nearly 20 miles (32.19 km) long and is not meant for speed racing but rather for enjoying a bike ride on the beautiful path.

Dog walkers, hikers, and other active Hoosiers also use this trail for athletic purposes.

Most of the time, restaurants dish it out so large it can barely fit on the bun. Though the origins of this sandwich aren’t clear, the pork tenderloin sandwich is a staple of the Indiana fair and is popular in both Indiana and Iowa.

The Conner Prairie Living Museum is a large outdoor attraction with many things to do. To highlight the history of Indiana, the Living Prairie Museum’s staff dress in traditional prairie outfits. Their old buildings show the architecture of the period.

At the Conner Prairie Living Museum, you can find:

One of the most popular events hosted at the Conner Prairie Living Museum is the Hearthside Suppers in the Spring, where foods are prepared traditionally from the 1800s.

Holiday World is one of the most popular amusement parks in the entire world and is located in Indiana. This park was the first-ever “theme” park, set in Santa Claus, Indiana, which began as Santa Claus world and slowly became a theme park to showcase all of the many holidays we celebrate.

The theme park has rides, events, and food for visitors.

On average, the park gets over one million visitors a year. On any given day, the population at Holiday World & Splashin’ Safari is larger than the population of the entire town it resides in.

Biggest Children’s Museum in the World

The biggest Children’s Museum in the entire world is in Indiana, and it hosts classes, camps, and events catering to the developing child. You can find exhibits for:

Additionally, this museum has dozens of interactive indoor and outdoor experiences. Families can participate in football, basketball, putt-putt golf, and tennis at the Children’s Museum of Indiana.

“Ope” the Word of the Locals

One of the easiest ways to spot a midwesterner is by using the word “ope,” and Indiana falls into this category. “Ope” is used as a colloquialism meaning “whoops” or “sorry about that.” The term is used by people in Indiana and across the midwest alike. However, it is more popular in Minnesota and Wisconsin than in Indiana.

Indiana has both historical and modern sites fit for everyone. With its prestigious universities, kid-friendly amusement parks, and diverse state parks, you’ll find that Indiana has a little something for everyone on the list.

Indiana is centrally located and well known in the US for its involvement in agriculture and entertainment.

Whether you would like to visit during the winter months to ski or the Summer months to hike, there’s always something to do in Indiana. From Indiana, you’re also within traveling distance of the famous cities of Chicago, Illinois, St. Louis, Missouri, and Cincinnati, Ohio.