Top 14 Things Cleveland is Known For and Famous For 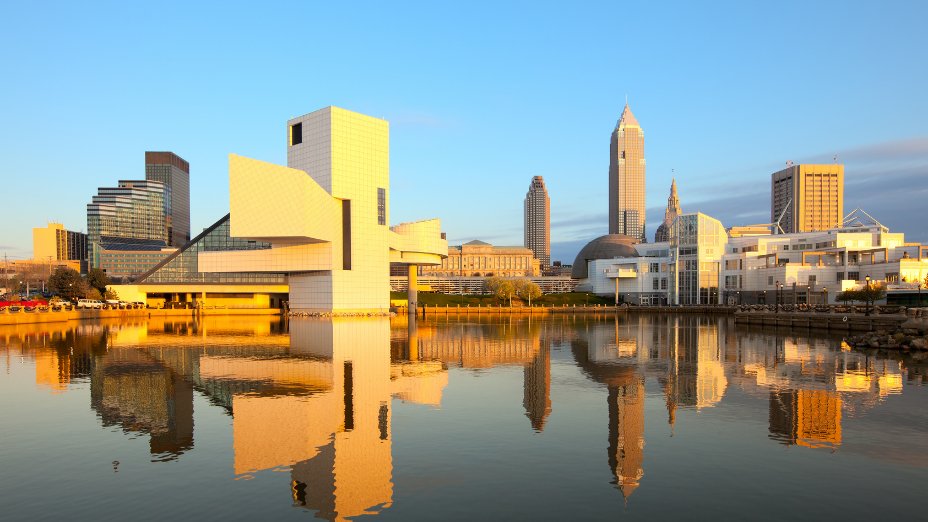 What Is Cleveland Known For?

Cleveland is the largest city on Lake Erie, and its connections to the local waterways have helped it develop and maintain itself as a major metropolitan center in the Midwest. Its location also makes it a hub that connects the Midwest to both the eastern and western United States and Canada to the north. But what makes this city stand out?

Cleveland is known for its beautiful parklands, vibrant art and culture scene, musical history, and Cleveland Clinic medical center. It has several sports teams (Browns, Cavaliers) and is often called the birthplace of rock and roll. Established in 1796, it has continuously developed its identity.

Like many cities established in America’s infancy, Cleveland, Ohio has undergone a few transformations since its beginning. Once a center of industry and manufacturing, Cleveland is better known today for its cultural life. Read on to learn more about this exciting Midwestern city. 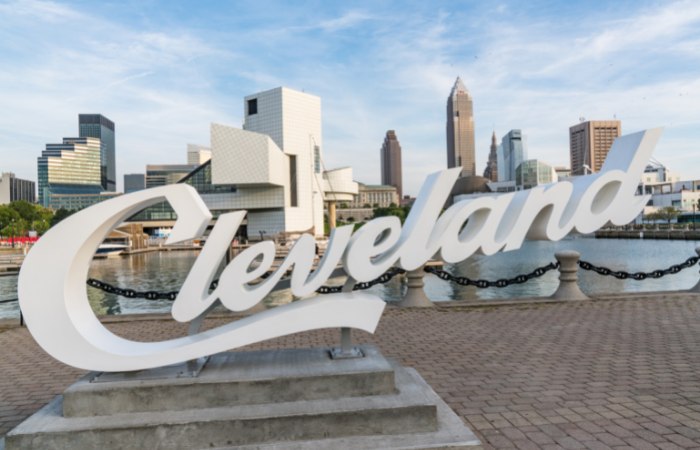 In 1796, a group of surveyors from Connecticut founded and planned the city of Cleaveland, named for their leader Moses Cleaveland. (The city eventually dropped the first ‘a’ so that the local newspaper, The Cleveland Advertiser, could fit the whole name on their masthead.) While Cleaveland didn’t stay, the settlement quickly grew.

Cleveland is connected to the Atlantic Ocean via a series of waterways linking the Great Lakes to eastern shipping ports. The route has changed over time, but since Cleveland’s founding, the city has been an essential part of water trade routes from the Atlantic down to the Gulf of Mexico. This trade helped the city flourish.

The waterways also made Cleveland an important stop on the Underground Railroad, known as Station Hope. The Great Lakes’ access made travel to Canada — and freedom — possible for many formerly enslaved people.

Today, Cleveland is a diverse city whose economy has grown beyond trade and manufacturing. Since the early 20th century, it has developed fine and performing arts in the city and created a sprawling expanse of parkland to support sustainability and environmental protection goals.

For more on Cleveland’s History check out this book here on Amazon! 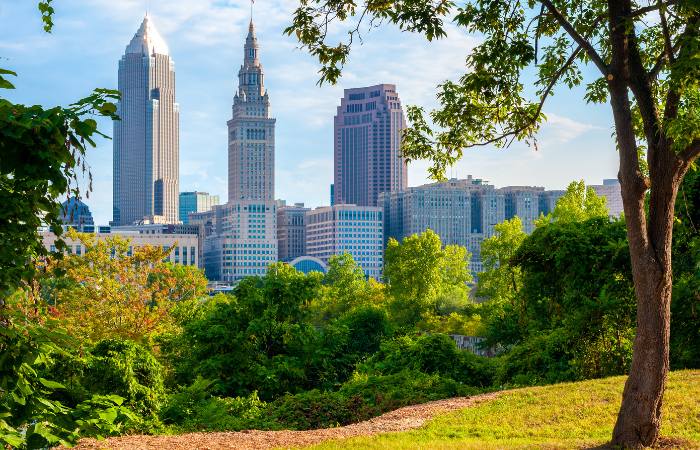 Cleveland even has it’s own board game! Check out Cleveland-opoly on Amazon here.

Cleveland As the “Forest City”

While the Cleveland Metroparks system has existed since the early 1900s, Cleveland wasn’t always a model of environmentalism. Industrial pollution was such a significant problem in Cleveland that the Cuyahoga River caught fire at least 13 times between 1868 and 1969. The 1969 fire, however, launched the fight for the Environmental Protection Agency and the modern environmentalist movement.

Cleveland Metroparks boasts several attractions in addition to the miles of hiking and biking trails. The Cleveland public park system has its own set of gardens and attractions, too, which contributes to the overall green space of the city.

The Cleveland Metroparks Zoo has been around since 1882 when it was a zoo exclusively for local animals. Cleveland Metroparks didn’t take control of the zoo until 1975. It’s grown exponentially since the beginning and is now home to 3,000 animals from 600 different species.

The zoo has one of the largest collections of primate species in North America, including multiple lemur species. They also care for three tortoises, two of which are more than 100 years old.

One of the gems of the city’s park system is the Cleveland Cultural Gardens. These 33 gardens represent different ethnic groups who have contributed to Cleveland in particular and America in general. Leo Wiedenthal and Charles Wolfram came up with the idea and planted the first garden —  the English Garden — in 1916.

Today, each garden is managed by people from the ethnicity it represents. The garden’s mission is to foster peace and understanding between all people and celebrate multicultural diversity in Cleveland and the world.

Near the Cultural Gardens is the Cleveland Botanical Garden. This garden is a plant-science research center as well as a tourist destination. In 1930, six women from the Garden Club of Greater Cleveland founded it as a place to house their extensive library of horticultural works and teach the public about gardening and botany.

Over the years, the Garden has moved a few times to expand and avoid flooding. However, at every location, it has remained dedicated to plant education, particularly for children and youth. The Garden also continues to maintain the books that started the whole endeavor in a state-of-the-art library. 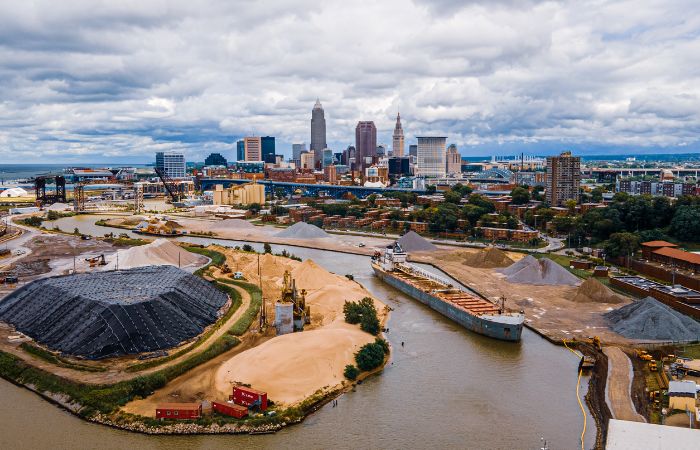 While Cleveland is full of beautiful green spaces, not all of its cultural achievements are outdoors. The city has an active art, theater, and science culture as well. To top it off, the city has a large and robust library system that supports the city’s cultural life with its books and special collections.

The Cleveland Museum of Art has a substantial collection from around the world but is most known for its extensive Asian and Egyptian art collections. Several prominent Cleveland industrialists founded the museum in 1913. It’s the centerpiece of Wade Park, a large green space donated to the city by yet another industrialist.

The museum offers free admission to the public and has art from all over the world on display. The Museum building also serves as the headquarters of the fictional organization S.H.I.E.L.D. in the Marvel Cinematic Universe films and television series, primarily the film Captain America: The Winter Soldier.

Downtown Cleveland is the home of Playhouse Square, the largest performing arts center in the United States outside New York City. A single developer, Joseph Laronge, had a vision for a row of theaters in downtown Cleveland in the early 1920s. He helped build five theaters by 1922 along Euclid Avenue.

The theaters were successful until after World War II when they fell into decline. They almost closed for good in the early 1970s, but a production of Jacques Brel is Alive and Well and Living in Paris helped revive interest in the area. A grassroots movement saved the theaters, and they remain a thriving site of theater, dance, and musical performance in Cleveland today.

Cleveland is a home for science as much as it is for art. The Great Lakes Science Center is a museum and educational center that features exhibits on scientific achievements and environmental science from the Great Lakes area. Three are permanent and rotating exhibits, including themes like space, steamships, and biomedicine.

The Cleveland Public Library is the 14th largest library system in the United States. It contains the largest chess library in the world, the John G. White Checkers and Chess collection of over 32,000 chess books and 6,000 chess periodicals.

The library system has an annual circulation of over 1.6 million books. It’s also the depository for the State of Ohio, one of only 40 United Nations depository libraries. For over 150 years, the Cleveland Public Library has been an essential resource for the citizens of Cleveland. In addition to books and periodicals, the library also has a tech center and hosts numerous community events and festivals around Cleveland. 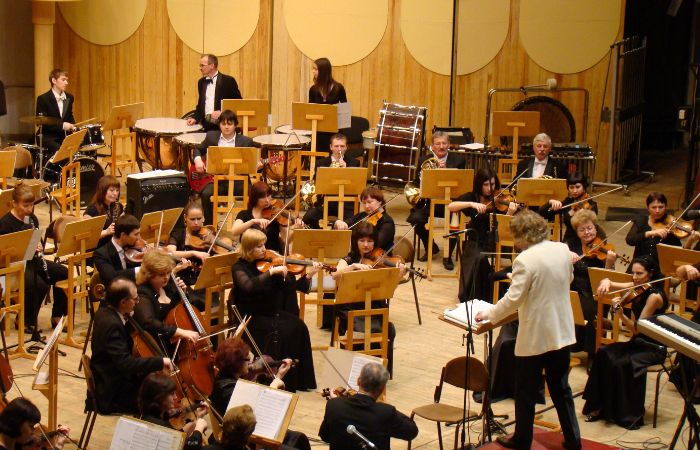 Cleveland is also home to three important — but very different — music organizations. The Cleveland Orchestra, Rock and Roll Hall of Fame, and Polka Hall of Fame are all located in the Greater Cleveland area. Each was founded at a different point in Cleveland’s history, but they all shape the music landscape in the city today.

The Cleveland Orchestra is part of the original “Big Five” symphony orchestras in the United States. This designation applies to leaders in the field for musicianship and how many weeks per year the orchestra performs and how well the musicians are compensated, and whether the orchestra regularly makes recordings.

While the “Big Five” designation is not as meaningful as it was in the 1950s, the Cleveland Orchestra still consistently ranks in the top ten orchestras in the world. The Orchestra opened its doors in 1918, and it has performed and recorded a wide array of classical and contemporary pieces ever since.

Rock and Roll Hall of Fame

Cleveland isn’t just the home of some of the best orchestral music; it’s also the birthplace of rock and roll. Radio DJ Alan Freed from WJW (AM) popularized the term “rock and roll” on air during the 1950s.

Freed’s use of the term would be a key factor in Cleveland’s bid to be the home of the Rock and Roll Hall of Fame in the 1980s. The bid was successful, and the museum opened in 1993. It hosts exhibits and memorabilia related to the history of rock and roll. The museum’s library and archives hold music business records for dozens of important figures in rock and roll history.

Officially called the National Cleveland-Style Polka Hall of Fame, the polka museum is dedicated to celebrating the musical style developed by Slovenian immigrants in Cleveland. The American Slovenian Polka Foundation started the museum in 1987 near the home of the Father of American Polka, Frankie Yankovic.

The exhibits feature memorabilia and photographs tracing polka’s history in America. There’s also a collection of celebrity accordions, including one of Frankie Yankovic’s instruments. The museum also hosts an award show every Thanksgiving weekend to induct new members into the Hall of Fame via a lifetime achievement award. 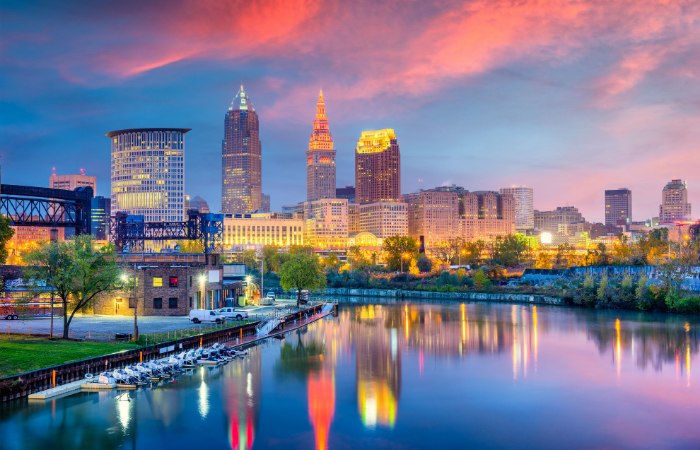 The Cavaliers basketball team has won the Eastern Conference five times since 2007, winning the NBA playoffs once in 2016. It was the first national championship a Cleveland sports team had won in 50 years, led by Lebron James (originally from nearby Akron, Ohio).

Cleveland’s baseball team, the Indians, has won two World Series. The first was in 1920, and the second was in 1948. Since then, they’ve made it to the World Series four more times but never took home the pennant.

The Browns are the city’s NFL football team. The team won eight national titles between 1946 and 1964. In 1995, the team’s owner abruptly moved them to Baltimore, where they became the Baltimore Ravens. The Browns were re-established in 1998 and resumed play in the 1999 season. While they’ve never played in a Superbowl, they have a loyal fanbase.

If you or anyone you know is a Cleveland sports fan you have to check out this trivia game on Amazon here.

Perhaps the most famous institution in Cleveland is the 100-year-old Cleveland Clinic. The world-renowned hospital was inspired by World War I doctors from Cleveland known as the Lakeside Unit.

In 1921 when the hospital opened, it took a revolutionary approach to medicine, focused on patient care and research. That pioneering spirit continues today, and the hospital is a consistent leader in the medical field. It has been named as one of the world’s most ethical companies ten times as of 2020. 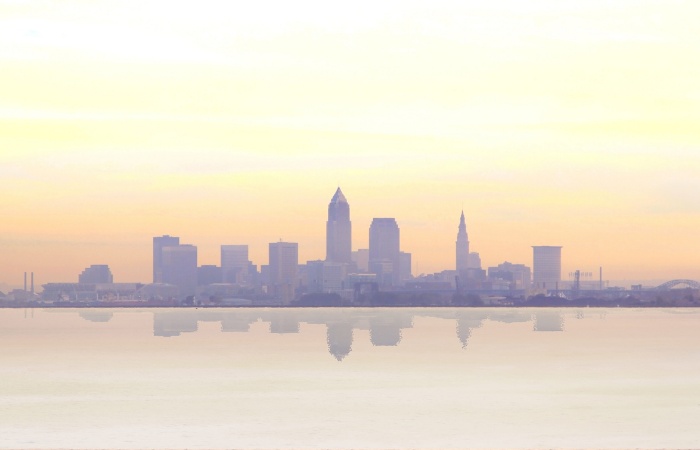 Cleveland, Ohio has covered a lot of ground in its 200-year history. It has contributed to art, science, and music and boasts expansive parkland and nature preserves. Despite environmental setbacks in the early days of industrialism, Cleveland is emerging as a sustainability and environmental protection leader.

The city has a world-class library system and abundant science education programs from botany to biomedicine, all in museums and gardens that are open to the public. The Forest City on the banks of Lake Erie has gone from a nexus of water trade to a thriving modern metropolis in the Midwest.

Check out Hotels.com here for the best deals on accommodation (Use code REBATES21 for up to a $100 cash rebate on booking!)

For more information on Cleveland, Ohio be sure to check out these two books on Amazon:

Cleveland Then and Now by Laura DeMarco

Secret Cleveland: A Guide to the Weird, Wonderful, and Obscure by Deb Thompon & Tonya Prater